From a systemic hemodynamic perspective, blood pressure is regulated primarily by the sympathetic nervous system and the kidneys through their influence on cardiac output and peripheral vascular resistance. There is increasing awareness that vasoactive and other substances produced within the blood vessel wall may have a substantial role in the regulation of blood pressure and in the pathophysiology of hypertension.

Cardiac output, which is the product of stroke volume and heart rate, is increased by sympathetic stimulation via activation of β1-adrenoceptors in the heart. Cardiac output is also influenced by the kidneys via their regulation of blood volume, which is one of the factors determining the cardiac filling pressure and stroke volume.

Peripheral vascular resistance (PVR) is chiefly determined by the resistance to blood flow through the arterioles, whose cross-sectional area depends on arteriolar smooth muscle tone in the various vascular beds. Via activation of α1-adrenoceptors, the sympathetic nervous system stimulates arteriolar smooth muscle contraction, and this leads to vasoconstriction. Several blood-borne substances, including vasopressin and angiotensin II, produce vasoconstriction. In addition, adenosine, serotonin, endothelin, prostaglandins, and a number of other substances produced locally in various tissues have an effect on arteriolar smooth muscle tone. These substances serve to regulate blood flow through the tissues, and they can also affect systemic arterial pressure.

The four major categories of antihypertensive drugs are the diuretics, sympatholytics, angiotensin inhibitors, and vasodilators. Subcategories and examples are listed at the beginning of the chapter. The various antihypertensive drugs lower blood pressure through actions exerted on one or more of the following sites: kidneys, sympathetic nervous system, renin-angiotensin-aldosterone axis, or vascular smooth muscle (Fig. 10–1). 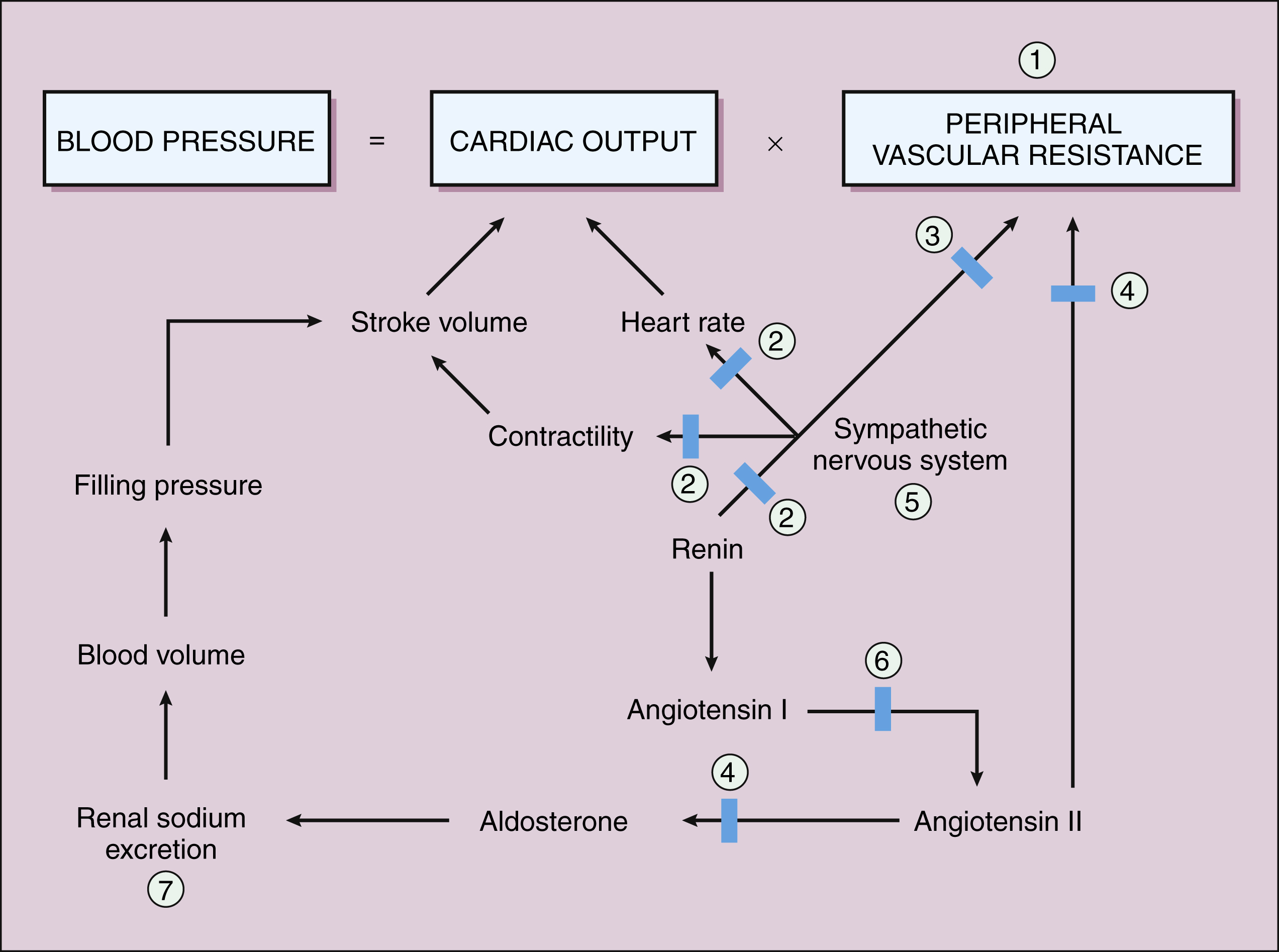 Antihypertensive drugs can be characterized in terms of their cardiovascular effects (Table 10–2) and their pharmacologic effects on serum potassium and cholesterol measurements, which are important cardiovascular risk factors (Table 10–3). They can also be characterized in terms of the compensatory mechanisms invoked by their hypotensive effect. The compensatory mechanisms tend to return blood pressure to the pretreatment level and include reflex tachycardia, fluid retention by the kidneys, and activation of the renin-angiotensin-aldosterone axis. Drugs that cause vasodilation tend to invoke compensatory mechanisms to a greater extent than do drugs that suppress cardiac output, cause diuresis, or inhibit angiotensin. For this reason, vasodilators are often combined with other types of drugs (e.g., diuretics) that prevent compensatory responses. 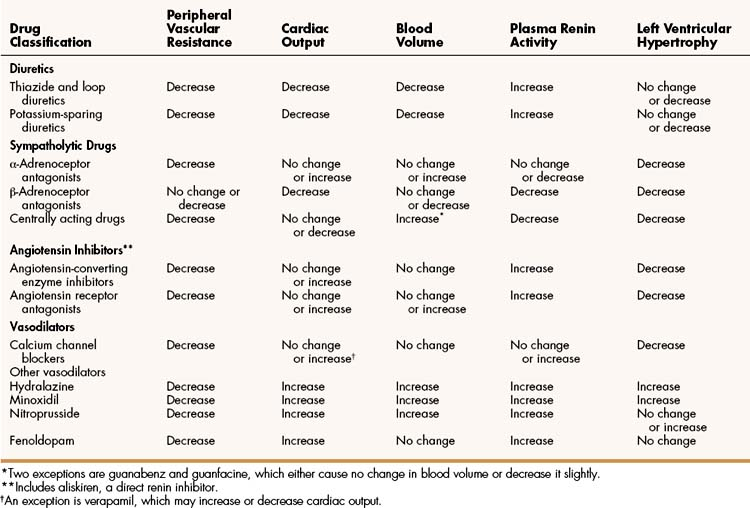 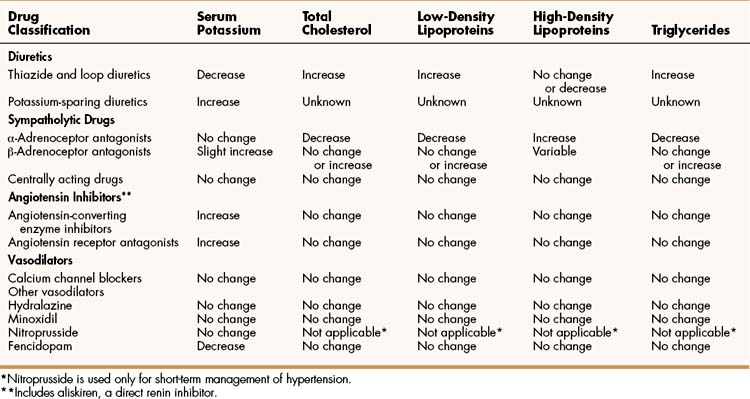 Whereas most antihypertensive drugs are taken orally on a long-term basis, some are administered parenterally for the management of hypertensive emergencies. The treatment of this condition is discussed at the end of the chapter.

Chapter 13 provides detailed information about the various classes of diuretics and their uses, mechanisms of action, and pharmacologic properties. The discussion here focuses on the diuretics most commonly used to treat hypertension: the thiazide and related diuretics, and the potassium-sparing diuretics.

Thiazide and related diuretics reduce blood pressure by two mechanisms, both stemming from their ability to increase sodium and water excretion. When they are first administered to a patient, the drugs decrease blood volume and thereby decrease cardiac output (Fig. 10–2 and Table 10–2). With continued administration over weeks and months, they also decrease PVR, and this appears to account for much of their long-term antihypertensive effect. The decreased PVR may result from a reduction in the sodium content of arteriolar smooth muscle cells, which decreases muscle contraction in response to vasopressor agents such as norepinephrine and angiotensin. This relationship is supported by the finding that the effect of a thiazide on PVR is reduced if patients ingest enough dietary sodium to counteract the natriuretic effect of the drug. 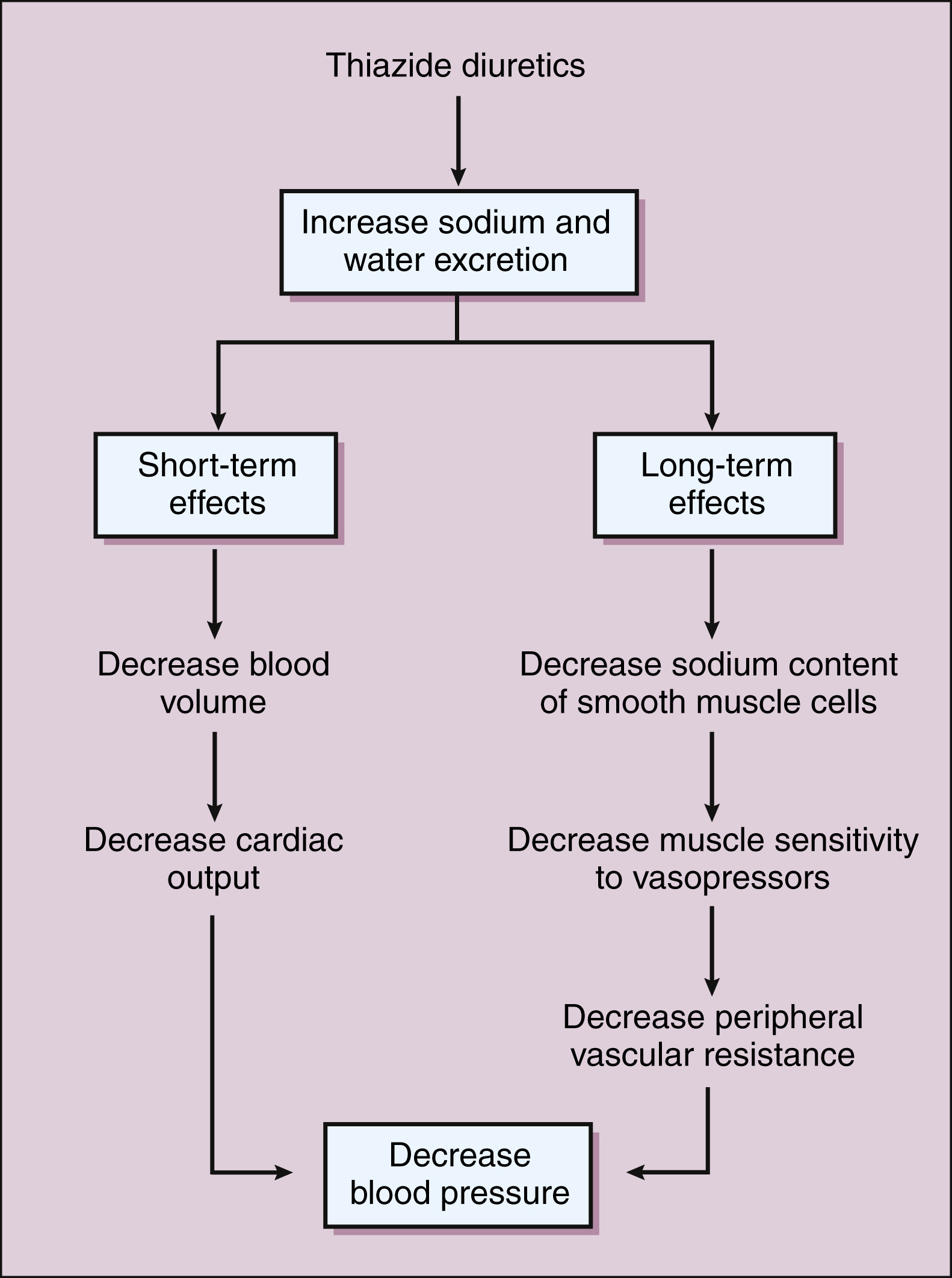 Use of a thiazide typically reduces the blood pressure by 10 to 15 mm Hg. Hydrochlorothiazide is the thiazide diuretic most often used to treat hypertension. Indapamide, metolazone, and other thiazide-like diuretics have equivalent efficacy in the treatment of hypertension and differ primarily in their pharmacokinetic properties. Indapamide can also cause vasodilation via calcium channel blockade.

The JNC 7 report recommends a thiazide diuretic for initial therapy of most patients with high blood pressure. Thiazide diuretics can be used alone or in combination with another type of antihypertensive agent (e.g., a sympatholytic, an angiotensin inhibitor, or a vasodilator). The two drugs usually have an additive effect on blood pressure, and the diuretic prevents the compensatory fluid retention that otherwise can be evoked by the other agent. The JNC 7 report indicates that more than two thirds of patients with hypertension cannot have their condition controlled with a single drug.

The common adverse effects and interactions of thiazide diuretics and other antihypertensive agents are summarized in Table 10–4. The primary disadvantage of thiazide diuretics is their tendency to cause hypokalemia, which can lead to cardiac arrhythmias. Using a low dosage of a thiazide diuretic (e.g., 25–50 mg/day of hydrochlorothiazide) usually produces a maximal antihypertensive effect with minimal hypokalemia. Using a higher dosage causes more hypokalemia but does not have a greater effect on blood pressure. Thiazides elevate plasma levels of glucose, uric acid, and lipids in some patients. Less commonly, they cause hematologic toxicity and aggravate hepatic disease. They can also evoke a compensatory increase in renin secretion, and this reduces their effectiveness in some patients.

An advantage of taking thiazide diuretics is that they appear to offer protection against osteoporosis, a condition in which bone demineralization and loss of bone mass make patients more susceptible to fractures. Thiazides are probably beneficial in this condition because they decrease the urinary excretion of calcium.

Examples of potassium-sparing diuretics are amiloride, spironolactone, and triamterene. These agents exert a mild natriuretic and antihypertensive effect. They also reduce renal potassium excretion and thereby prevent hypokalemia, a common problem caused by other diuretics.

Several drug products that contain both a thiazide diuretic and amiloride or triamterene are available. Potassium chloride tablets can also be used to prevent and treat hypokalemia.

Eplerenone is similar to spironolactone but has fewer endocrine side effects. Eplerenone has been found to cause regression of left ventricular hypertrophy in hypertensive patients and regression of microalbuminuria in patients with type 2 diabetes. These findings open the possibility of increased use of this drug in persons with these conditions.

The sympatholytic drugs used in the treatment of hypertension include adrenoceptor antagonists and the centrally acting α2-adrenoceptor agonists. The pharmacologic effects of these drugs are summarized in Tables 10–2 and 10–3 and their common adverse effects and drug interactions are listed in Table 10–4.

Selective α1-blockers, such as doxazosin, prazosin, and terazosin, are used in the treatment of hypertension. Although they effectively inhibit sympathetic stimulation of arteriolar contraction, leading to vasodilation and decreased vascular resistance, these drugs have several disadvantages. The α1-blockers may evoke reflex activation of the sympathetic nervous system and can increase the heart rate, contractile force, and circulating norepinephrine level. These drugs do not protect the heart against ventricular arrhythmias, and they are usually not employed in patients with ischemic heart disease because they often increase myocardial oxygen requirements. Because they also activate the renin-angiotensin-aldosterone system and can cause fluid retention, they frequently must be given in combination with a diuretic. The α1-blockers can also cause orthostatic hypotension. For these reasons, α1-blockers are not preferred drugs for the initial treatment of most patients with high blood pressure.

Selective α1-blockers produce less reflex tachycardia than do nonselective α1– and α2-blockers (e.g., phentolamine and phenoxybenzamine), which are not used in the management of primary hypertension. Phentolamine and phenoxybenzamine have been used for short-term management of patients with hypertensive episodes caused by pheochromocytoma (see Chapter 9).

The administration of a selective α1-blocker and a diuretic may cause first-dose syncope in some patients, but this can be prevented by beginning treatment with a low dose of the blocker at bedtime and withholding the diuretic for 1 day. The pharmacokinetic properties of α-blockers are covered in Chapter 9.

The β-blockers lower blood pressure by blocking β1-adrenoceptors in the heart and other tissues. Blockade of cardiac β1-receptors reduces cardiac output by decreasing the heart rate and contractility. Blockade of β1-receptors in renal juxtaglomerular cells inhibits renin secretion which, in turn, reduces the formation of angiotensin II and the subsequent release of aldosterone. The drugs also appear to reduce sympathetic outflow from the central nervous system. Hence, β-blockers have multiple actions affecting blood pressure.

The role of β-blockers in treating hypertension in persons without preexisting cardiovascular disease is controversial. Recent meta-analyses of clinical trial data suggest that β-blockers such as atenolol are less likely to prevent stroke, myocardial infarction, and death in patients without coronary heart disease in comparison with the calcium-channel blockers, renin-angiotensin system inhibitors, and diuretics. Hence, some experts have suggested that β-blockers should not be used alone for the initial treatment of most hypertensive patients. In 2006, the U.K. National Institute for Health and Clinical Excellence published a clinical guideline in which β-blockers are no longer preferred as the initial therapy for hypertension and instead recommended a diuretic, angiotensin system inhibitor, or calcium channel blocker (CCB) for the initial treatment of most hypertensive patients. Many patients with hypertension require more than one drug to control blood pressure without causing adverse effects, and the β-blockers can be combined with other drugs to achieve greater reductions in blood pressure. These drugs only rarely cause orthostatic hypotension or produce hepatic, renal, or hematopoietic toxicity. Analysis of pooled data from clinical trials suggests that β-blockers are only slightly more likely than a placebo to cause fatigue, sleep disturbances, and sexual dysfunction in persons receiving the drugs for hypertension.

Nonselective β-blockers are contraindicated in persons with asthma or chronic obstructive pulmonary disease because these drugs may cause bronchospasm due to β2-blockade. Selective β1-blockers may be used cautiously in these patients if a β-blocker is required. Beta blockers may improve cardiovascular outcomes in diabetic patients, but this comes at the price of slightly impaired glycemic control due to decreased insulin sensitivity. Not all β-blockers are alike in this regard, and third-generation β-blockers such as carvedilol may actually improve insulin sensitivity. Nonselective β-blockers may delay recovery from hypoglycemia by blocking β2-receptor mediated glycogenolysis and hepatic glucose production. Hence, selective β1-blockers are usually preferred for treating hypertension in diabetic patients.

Chapter 9 compares the pharmacologic properties of selective β1-blockers (e.g., atenolol, bisoprolol, and metoprolol) with those of nonselective β-blockers (e.g., nadolol, propranolol, and timolol) and drugs that block both α and β receptors (carvedilol and labetalol). Atenolol is less lipophilic than other β-blockers and may cause fewer central nervous system side effects than more lipophilic drugs such as propranolol. Labetalol is used to treat both chronic hypertension and hypertensive emergencies. Because of its α-adrenoceptor-blocking activity, it can cause orthostatic hypotension. Esmolol is an intravenously administered, ultrashort-acting β1-blocker that is used to treat hypertension in surgical patients and in persons with hypertensive emergencies. Carvedilol is a third-generation α- and β-blocker with antioxidant properties that can protect the vascular wall from free radicals that damage blood vessels and thereby contribute to the progression of cardiovascular disease. Nebivolol is a new third-generation drug undergoing clinical trials. This selective β1-blocker with antioxidant properties also increases the release of endothelial nitric oxide and thereby exerts a vasodilating effect that contributes to the blood pressure-lowering effect of this drug. Nebivolol provides another option for treating hypertension in patients with heart failure, diabetes, and cardiac arrhythmias.