The list of representative HNS developed in the world (mass%)

Nitrogen solubility of Fe-Cr alloy under 1 atm, in the equilibrium state (Reprinted from Ref. [3]. Copyright 1990, Verlageisen)

The technology and facility associated with pressurized electroslag remelting (ESR) were firstly invented in Austria and completed in Germany after long research [1–3]. The chemical compositions of the final ingot produced using a pressurized ESR method were determined by the combination of primary electrode and that of nitride or ferro-nitride under pressurized conditions.
A pressurized electroslag remelting furnace was developed for the first time in Japan, which is available for both the nitrogen alloying and purification of ingot, and successfully fabricated high-nitrogen steel without addition of manganese, which will cause impurity introduction to the ingot [5–7].
Basic specifications of the pressurized electroslag remelting furnace installed are as follows: ingot size, 20 kg (in case of steel); Cu crucible; AC current in max, 3,000A; and maximum nitrogen gas pressure, 5 MPa. Two types of basic alloys for high-nitrogen steels are Fe-23 %Cr-4 %Ni-2 %Mo and Fe-23 %Cr-2 %Mo. Phase diagram for these alloys calculated by a thermodynamic calculation is shown in Fig. 6.3. From this figure it is suggested that if even the nickel content is low, high-nitrogen steel with single austenitic phase would be available in the case of nitrogen content higher than 1 mass%. Furthermore, Nickel-free high-nitrogen steel would be available in the case of nitrogen content higher than 1.2 mass%.

Phase diagram of HNS calculated by thermodynamic method
Powder of Fe-Cr-N was used as nitrogen source for high-nitrogen steel. Furnace flux used in this process was the combination of CaF2, CaO, and Al2O3. All necessary flux was installed in the furnace before starting to melt.
Figure 6.4 shows the schematic diagram of the pressurized ESR furnace developed in NIMS. The concept of how to fabricate high-nitrogen steel by pressurized ESR method is shown in Fig. 6.5. Primary electrode is energized by AC current through flux, which results in the flux being changed to the high-temperature liquid. Then primary electrode is melted in the high-temperature flux and goes down to Cu crucible below and is solidified to an ingot. Purified material is solidified into ingot through this process.

In general, if powder of ferro-chrome nitride was used as nitrogen source, the oxygen concentration of ingot is relatively high more than 100 ppm, since the oxygen pickup is inevitable to use powder ferro-chrome nitride.
In order to get an ingot with highly corrosion-resistant property, it is necessary to adopt deoxidation process. Aluminum or metallic calcium as deoxidation elements is effective.

Figure 6.6 shows the comparison between elongation and tensile strength of the newly developed high-nitrogen steel (HNS) and those of commercial steels referred from the literature. These data of the 23 % Cr series of HNS were obtained after solution treatment. It is obvious from this figure that the elongation of the developed austenitic single phase HNS is almost equal to that of Type 304 stainless steel, while the tensile strength of HNS is located around 1,000–1,200 MPa.

Mechanical properties of HNS
Figure 6.7 shows the temperature dependence of the mechanical properties of HNS such as tensile stress, proof stress, elongation, and the reduction of area. The test material was 23 %Cr-4 %Ni-1 %N. After forging, hot working by caliber roll, tensile strengths of HNS were maintained as much as 1.5 times higher than those of Type 316 stainless steel in a wide range of temperature. The yield ratio (proof stress/tensile stress) of HNS varied from 0.5 to 0.6 for a wide range of temperatures.

Temperature dependence of mechanical properties of HNS
It was interesting to note that the elongation and the reduction of area of HNS were almost equal to those of Type 316 stainless steel although HNS is a fairly high-strength material.
Figure 6.8 shows tensile properties of HNS in a wide range of temperature. From this result, it is found that HNS shows remarkable work hardening behavior in a wide range of temperature from −35 to 500 °C, which means plastic forming of HNS is getting harder and harder with increasing deformation rate.

Load-elongation curves of HNS in a wide range of wide temperature
It is necessary to employ repeated processes of forming and tempering in order to remove the difficulty of plastic forming due to the work hardening property of HNS.

Figure 6.9 shows a typical microstructure of deformed HNS. Streaky patterns in the photo are actually pileup of dislocation along planes from 3-dimensional viewpoint, called planar dislocation. It seems that these planes are slipped easily corresponding to the outer deformation force. 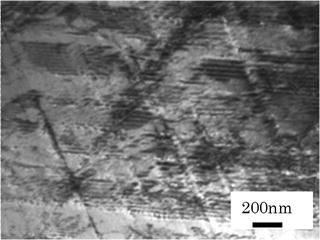 Typical TEM micrograph of deformed HNS (after 20 % cold rolled)
Figure 6.10 shows an example of drawing wire made of HNS. The right-side photo indicates human hair of about 100 μm in diameter for comparison, while the left one indicates the HNS wire of about 50 μm in diameter. In order to form such thin tube and plate successfully, impurity such as oxides in the matrix should be removed well in advance, which might result in the origin of fracture in the middle of processing. 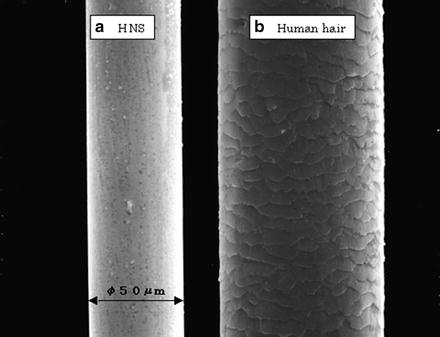 HNS thin wire of 50 μm in diameter (a) HNS, (b) human hair of about 100 μm in diameter
Figure 6.11 is an example of a thin plate of HNS (4 mass% Ni) of 100–120 mm in width and 0.08 mm in thickness. Although this plate was relatively hard and showed poor formability compared to those of conventional stainless steels, this thin plate was successfully fabricated by repeated processes between forming and tempering. 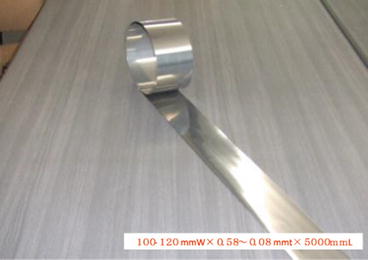 HNS thin plate of 80-100 μm in thickness
Figure 6.12 shows examples of thin-walled tubes (seamless pipe) made from Ni-free high-nitrogen stainless steel aiming for coronary stent. Bar samples of this material was machined to cylindrical pipes in the first step followed by drawing forming to thin-walled tubes down to 1.4 mm in outer diameter. As described in Sect. 6.5, biocompatible tests using the developed stent in vivo installed in pigs were successfully conducted. 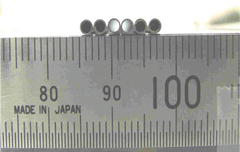 As for the fabrication of austenitic high-nitrogen stainless steel by pressurized ESR method, the following two merits can be raised.

Since high-nitrogen solubility is also available under high-pressurized condition, it is not necessary to use specific element such as manganese to raise the nitrogen solubility, which causes the lowering corrosion property.
2.

High-nitrogen stainless steel produced by pressurized ESR method possesses high-strength property, high corrosion resistant property, and nonmagnetic property, which are resulted from refining process by furnace flux and deoxidation process by Al or Ca.
Judging from the chemical compositions, high-nitrogen steel could be classified as austenitic stainless steel. Since high-nitrogen steel shows excellent properties, this material might be classified as a new material. There still exist issues to be solved in terms of application of high-nitrogen steel.
The most important issue to be solved from the viewpoint of practical application of high-nitrogen steel would be the establishment of formability technology to fabricate various products such as thin plates and small seamless pipes. In the case of high-nitrogen steel, of which nitrogen content is larger than 1 mass%, the Vickers hardness of HNS is around 300 even after solution treatment. Furthermore, this material shows remarkable work hardening behavior, which compels to repeat the forming and tempering treatment.
In addition, in order to solve the appropriate balance of strength and elongation of high-nitrogen steel, the establishment of microstructure control technology using a thermomechanical process and the refinement of grain size of materials are required.

For conventional ranking of stainless steels in terms of pitting resistance property, pitting resistance equivalent (PRE) or measure of alloying for resistance to corrosion (MARC) is widely used. It is well known that nitrogen is the element showing the maximum coefficient against PRE. PRE is a quite effective index from the viewpoint of engineering sense, while the physical and chemical meanings are not fully explicit yet.
The most popular description of PRE is probably described by the following Eq. (6.1) [12]:

(6.2)
The following Eq. (6.3) has been proposed by taking into account more sensitive effect of nitrogen [14]:

(6.3)
Jargelius [15] proposed the following Eq. (6.4) taking into account of the synergistic effects of N and Mo, as well as the effect of minus ion of Mn:

Effect of composition on the critical temperatures for pitting corrosion and for crevice corrosion (Reprinted from Ref. [16], Copyright 2003, The Indian Institute of Metals)

(6.5)
As shown in Fig. 6.12, MARC indicates good correlations with critical pitting corrosion temperature (CPT) and critical crevice corrosion temperature (CCT).
In addition, Gebeau and Brown [17] proposed 3.2 and 8 as the coefficients of N and Mo of high-nitrogen stainless steels of BioDur 108 and 734 for biomaterial use, respectively.
Although a variety of PRE indexes are widely used, they depend upon their chemical compositions and corrosive conditions, which means quite inconvenient to use widely.
It is well known that the addition of Mn to the steel results in the lowering corrosion resistant properties. Furthermore, positive effect of corrosion resistance by the addition of W and synergistic effects of N and Mo are also explicit by experimental background. An ideal PRE index should take into account of these factors moderately.
For example, a new index of ΣPRE has been newly proposed by the combination of Eqs (6.1) through (6.5), then the following Eq. (6.6) can be obtained,

Effect of composition on the critical temperatures for pitting corrosion and for crevice corrosion of nitrogen-bearing stainless steel in artificial seawater at the temperature of 45 °C
Figure 6.15 shows the effect of molybdenum content on pitting potential in artificial seawater. It was found that molybdenum was effective to improve pitting resistance. Then, ultrahigh-nitrogen-bearing steels showed good pitting resistance even molybdenum-free.

Effect of molybdenum content on pitting potential of nitrogen-bearing stainless steel in artificial seawater at the temperature of 45 °C
Only gold members can continue reading. Log In or Register to continue