Mucinous Differentiation in the Benign and Malignant Prostate


Mucinous (colloid) adenocarcinoma of the prostate gland is one of the least common morphologic variants of prostatic carcinoma.5–7 A lack of precision in the definition of these mucinous neoplasms has resulted in reports that have overstated the incidence of this rare variant. Much of the confusion in the terminology of this entity arises from the lack of recognition that between 60% and 90% of prostatic adenocarcinomas secrete mucosubstances, depending on the histochemical technique used.1,8–10 Only when extracellular mucin is secreted in sufficient quantity to result in pools of mucin should the term mucinous be employed. If the mucinous area occupies only a small portion of the tumor, it should not be called a “mucinous prostatic carcinoma” but rather a “prostatic adenocarcinoma with focal mucinous features.” Using criteria developed for mucinous carcinomas of other organs, the diagnosis of mucinous adenocarcinoma of the prostate gland should be made when at least 25% of the tumor resected contains lakes of extracellular mucin.6 Defined as such, this variant forms less than 1% of all prostate adenocarcinoma.11 The diagnosis of mucinous adenocarcinoma cannot be established on needle biopsy because the entire tumor is not available for examination. Rather, on needle biopsy, one can diagnose “adenocarcinoma of the prostate with mucinous features.”

In a more recent large series from our group, Osunkoya et al.11 reported the clinicopathologic findings of 47 mucinous adenocarcinomas of the prostate treated by radical prostatectomy. Mean patient age at diagnosis was 56 years. The mean preoperative PSA level was 9.0 ng/mL (range: 1.9 to 34.3 ng/mL). The majority of tumors (72%) were clinical stages T1c and Gleason score 7 (78.7%). Taking into account both the mucinous and nonmucinous tumor components, 43% of cases had extraprostatic extension and 13% had positive margins. Only one case was positive for lymph node metastasis.

The clinical behavior of mucinous prostate adenocarcinomas has been somewhat controversial. Although initial studies, including one from our group, suggested an aggressive biologic behavior,5–7 our more recent larger series mentioned earlier indicates that mucinous adenocarcinoma of the prostate treated by radical prostatectomy is not more aggressive and possibly is even less aggressive than conventional acinar prostatic adenocarcinoma. With a mean follow-up of 5.6 years, the study by Osunkoya et al.11 reported progression in only 1 out of 47 patients (2.1%) with a 5-year actuarial progression-free risk of 97% compared to 85% for nonmucinous prostate cancer with matched PSA and postoperative findings. This favorable prognosis is in line with the findings of another recent study by Lane et al.12 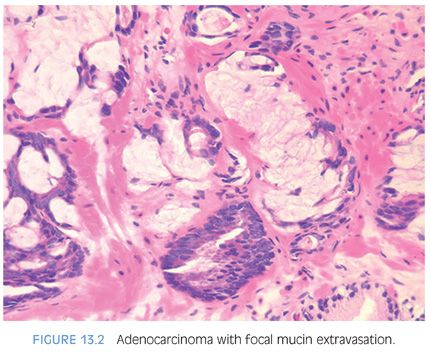 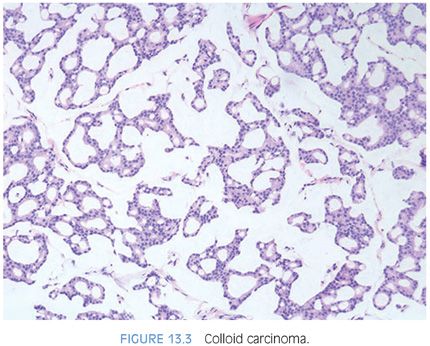 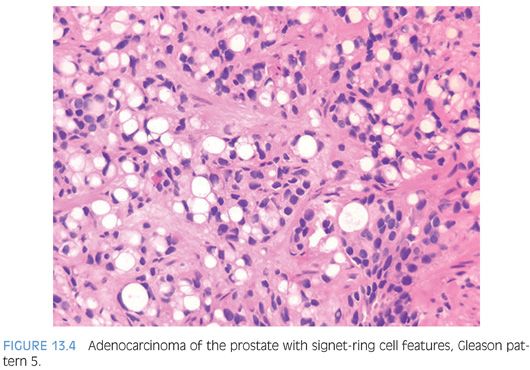 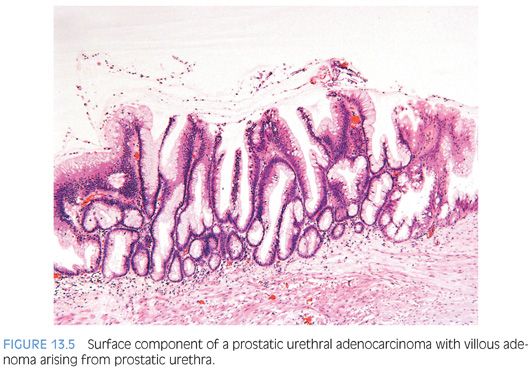 Tags: Biopsy Interpretation of the Prostate
Nov 27, 2016 | Posted by admin in PATHOLOGY & LABORATORY MEDICINE | Comments Off on Mucinous Differentiation in the Benign and Malignant Prostate
Premium Wordpress Themes by UFO Themes
WordPress theme by UFO themes
%d bloggers like this: