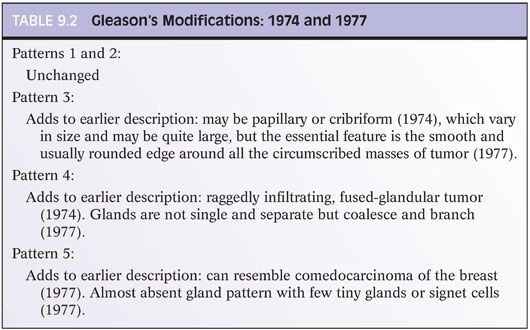 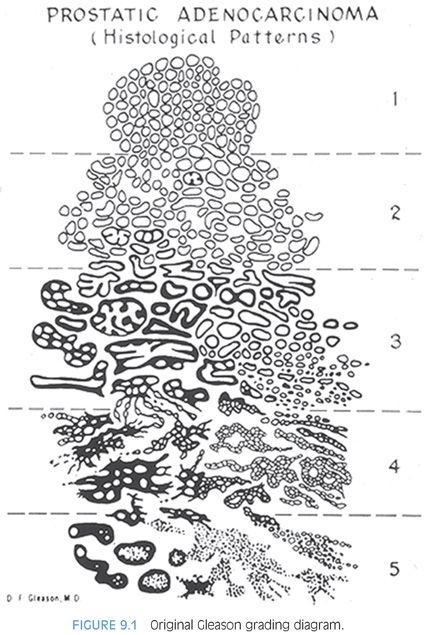 Why the Need for a Consensus on Gleason Grading?

Since the late 1960s when the Gleason grading system was derived, the field of prostate carcinoma has changed dramatically. In the 1960s, there was no screening for prostate cancer other than by digital rectal examination, as serum PSA had not yet been discovered. In Gleason’s 1974 study, the vast majority (86%) of men had advanced disease with either local extension out of the prostate on clinical exam or distant metastases. Only 6% of patients had nonpalpable tumor diagnosed by transurethral resection and only 8% of patients were diagnosed with a localized nodule on rectal examination.1 The method of obtaining prostate tissue was also very different from today’s practice. Typically, only a couple of thick-gauge needle biopsies were directed into an area of palpable abnormality. The use of 18-gauge thin biopsy needles and the concept of sextant needle biopsies to more extensively sample the prostate were not developed until the late 1980s.6 Consequently, the grading of prostate cancer in thin cores and in multiple cores from different sites of the prostate were not issues in Gleason’s era.

The Gleason system also predated the use of immunohistochemistry. It is likely that with immunostaining for basal cells that many of Gleason’s original 1 + 1 = 2 adenocarcinomas of the prostate would today be regarded as adenosis (atypical adenomatous hyperplasia), a mimicker of cancer.7 Similarly, many of the cases in 1967 diagnosed as cribriform Gleason pattern 3 carcinoma would probably be currently referred to as cribriform high-grade prostatic intraepithelial neoplasia (PIN) or intraductal carcinoma of the prostate, if labeled with basal cell markers.8,9

A group of urologic pathologists convened at the 2005 United States and Canadian Academy of Pathology (USCAP) meeting in an attempt to achieve consensus in controversial areas relating to the Gleason grading system.10 Over 70 urologic pathologists from around the world were invited to attend, with most attending. A schematic diagram was developed to reflect the modified Gleason grading system, which was subsequently slightly further modified to reflect changes in grading cribriform cancer (Table 9.3; Fig. 9.2, eFig. 9.1). 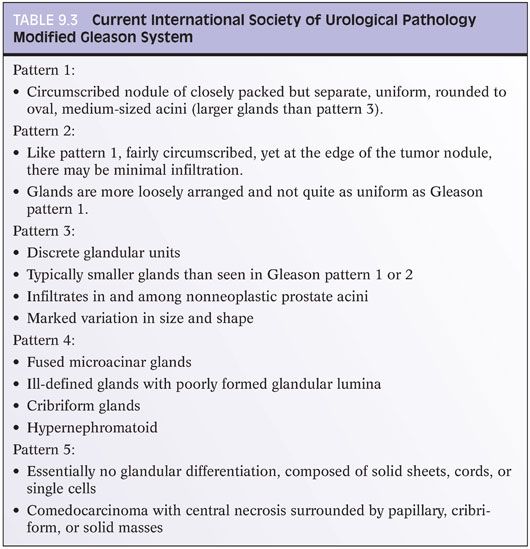 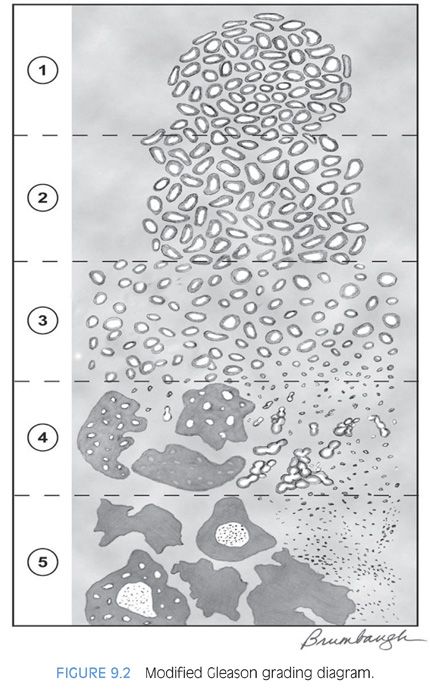 It is remarkable that nearly 40 years after the inception of the Gleason grading system, it remains one of the most powerful prognostic predictors in prostate cancer. In part, this system has remained timely by adaptations of the system to accommodate the changing practice of medicine. The Gleason grading consensus conference resulted in a modified updated Gleason grading system that is more relevant to today’s practice.

The initial grading of prostate carcinoma should be performed at low magnification using the 4× and 10× objective.1,10 After one assesses the case at scanning magnification, one may proceed to use the 20× objective to verify the grade. For example, at low magnification, one may have the impression of fused glands or necrosis but may require higher magnification at 20× to confirm its presence. One should not initially use the 20× or 40× objectives to look for rare fused glands or a few individual cells seen only at higher power, which would lead to an overdiagnosis of Gleason pattern 4 or 5, respectively (eFig. 9.7).

Gleason patterns 1 and 2 consist of fairly circumscribed nodules of closely packed glands (eFigs. 9.8 to 9.14). The glands are uniform in their size and shape with slightly more variation in pattern 2 than pattern 1. Smaller glands typical of Gleason pattern 3 are absent. It is now accepted that Gleason score 2 to 4 should not be assigned to cancer on needle biopsy for several reasons including poor reproducibility even among experts. Several studies have demonstrated that tumors on needle biopsy assigned a Gleason score of 2 to 4 are not infrequently associated with higher grade and high-stage disease at radical prostatectomy.11–13 The major limitation of rendering a diagnosis of Gleason score 4 on needle biopsy is that one cannot see the entire edge of the lesion to determine if it is completely circumscribed. Consequently, most of the lesions that appear to be very low-grade on needle biopsies are diagnosed by urologic pathologists as Gleason score 3 + 2 = 5 or 3 + 3 = 6. Studies have shown a dramatic decrease in the incidence of diagnosing Gleason score 2 to 4 on needle biopsy over the last decade. In one study, 24% of pathologists rendered a diagnosis of Gleason score of 2 to 4 on biopsy in 1991, which decreased to 2.4% in 2001.14 In another study analyzing biopsies from 2002 to 2003, only 1.6% were graded as Gleason score 2 to 4 compared to 22.3% of the biopsies in 1994.12,15

Low-grade cancers are rarely seen on needle biopsy because low-grade cancers are predominantly located anteriorly in the prostate within the transition zone and they tend to be small. Low-grade prostate cancer does exist and Gleason score 3 and 4 adenocarcinomas may be uncommonly diagnosed on transurethral resection of the prostate (TURP) (Fig. 9.3). Typically, both Gleason pattern 1 and Gleason pattern 2 carcinomas have abundant pale eosinophilic cytoplasm. It has been proposed that transition zone cancers be termed clear cell carcinomas.16,17 These tumors do not have a unique histology but rather reflect the finding that transition zone cancers are frequently low grade. Carcinomas with pale cytoplasm may also be found in the peripheral zone. 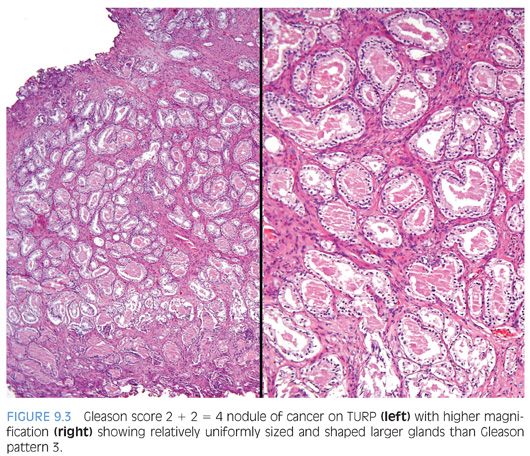 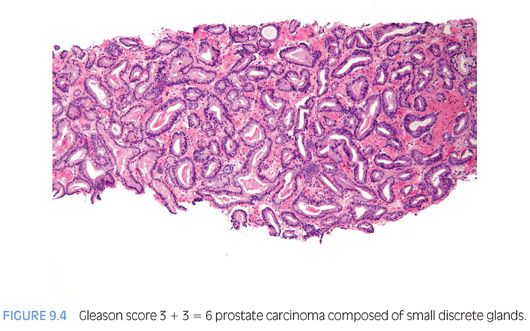 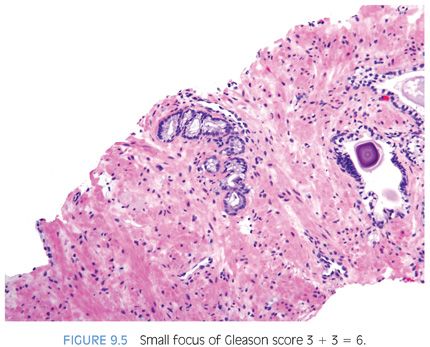 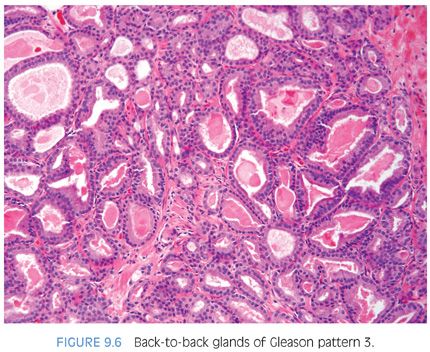 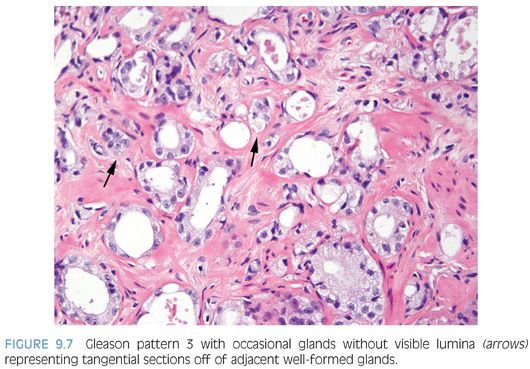 When glands surround a nerve (perineural invasion), the glands often develop a more complex papillary, crowded appearance (Fig. 9.8). Consequently, one should be cautious in diagnosing Gleason pattern 4 based on glands within perineural invasion in the absence of Gleason pattern 4 elsewhere. Similarly, the delicate ingrowth of fibrous tissue seen with mucinous fibroplasia (collagenous micronodules) can result in glands appearing to be fused resembling cribriform structures, although the underlying architecture is really that of individual discrete rounded glands invested by loose collagen. The tumor should be graded on the underlying glandular architecture, whereby the majority are graded as Gleason score 3 + 3 = 6 (Fig. 9.9).22 Only when there are distinct cribriform glands in areas of mucinous fibroplasia should Gleason pattern 4 be diagnosed (Fig. 9.10). 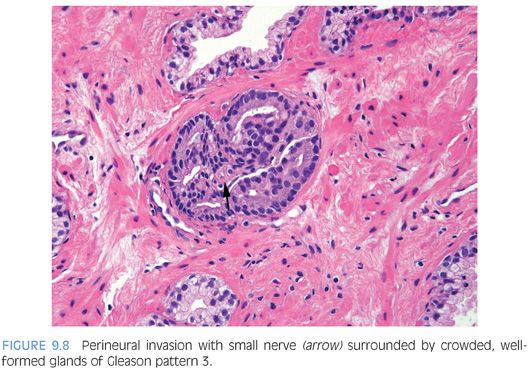 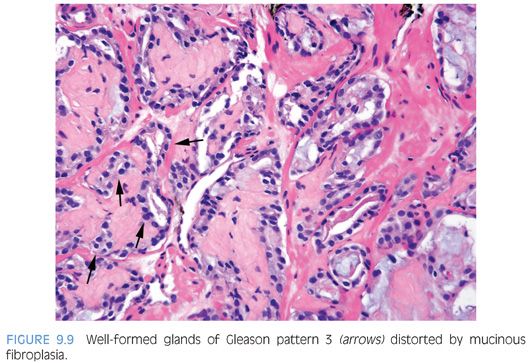 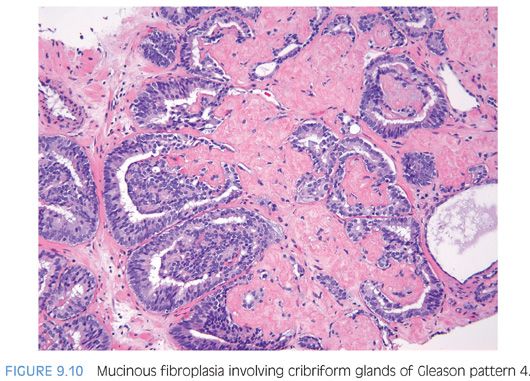 The 2005 ISUP consensus conference agreed with the original Gleason system that fused glands, irregular cribriform glands, and the hypernephroma pattern were designated as Gleason pattern 4.10 As described earlier, subsequent studies support the inclusion of any cribriform glands as pattern 4 (eFigs. 9.28 to 9.93). In addition, the consensus conference reported that ill-defined glands with poorly formed glandular lumina also warrant the diagnosis of Gleason pattern 4. In contrast, Gleason’s original description of pattern 4 included only the hypernephromatoid pattern and in subsequent years, fused glandular masses.19,23 Gleason pattern 4 closely resembling renal cell carcinoma (hypernephromatoid pattern) is rare, despite occupying a prominent role in the original Gleason grading system. Cribriform glands in one study were associated with a higher risk of postradical prostatectomy failure as compared to fused glands.21 The current spectrum of morphology in Gleason pattern 4 is depicted schematically in Figure 9.2. 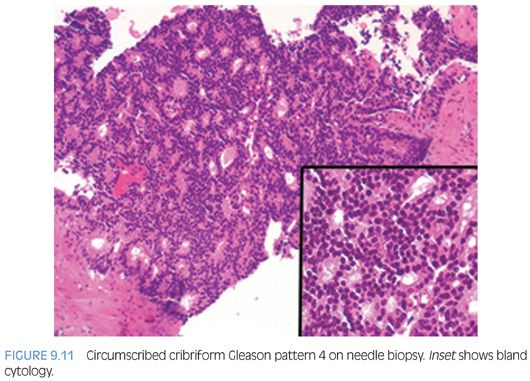 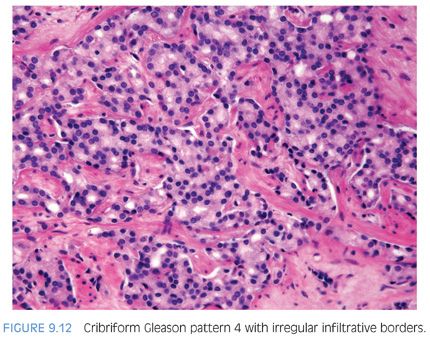 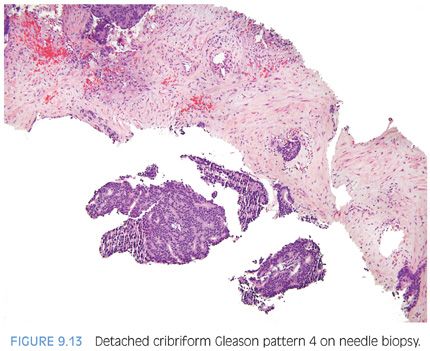 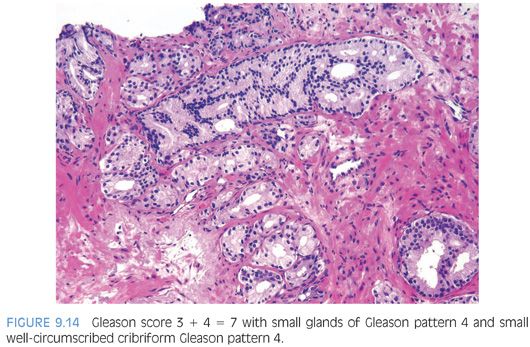 Tags: Biopsy Interpretation of the Prostate
Nov 27, 2016 | Posted by admin in PATHOLOGY & LABORATORY MEDICINE | Comments Off on Grading of Prostatic Adenocarcinomas
Premium Wordpress Themes by UFO Themes
WordPress theme by UFO themes
%d bloggers like this: