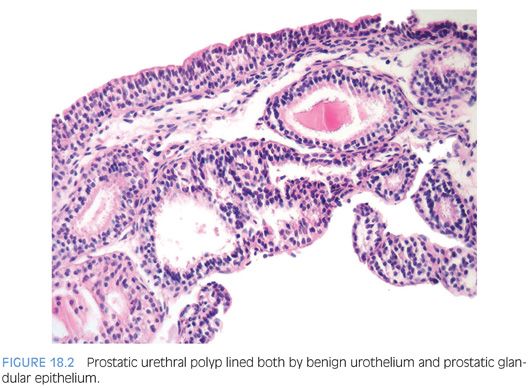 A rare type of urethral polyp arising in the prostatic urethra is fibroepithelial polyp (Figs. 18.3 and 18.4, eFigs. 18.2 to 18.7).10 They are found at all ages, from the newborn to the elderly. Fibroepithelial polyps are typically lined by normal-appearing urothelium, although exceptionally by a columnar epithelial lining. There are three overall architectural patterns seen within fibroepithelial polyps. The most common pattern consists of a polypoid mass with club-like projections resembling a clover leaf with florid cystitis cystica et glandularis of the nonintestinal type in the stalk. The second pattern is that of a papillary tumor composed of numerous small, rounded fibrovascular cores containing dense fibrous tissue. The last morphologic pattern is a polypoid lesion with secondary tall finger-like projections. All lesions lack prominent edema and inflammation seen in polypoid cystitis. Fibroepithelial polyps contain broader stalks with dense fibrous tissue, in contrast to the thin delicate loose fibroconnective tissue seen in the stalk of papillomas. Lesions can uncommonly contain atypical degenerative-appearing stromal cells. Although fibroepithelial polyps have been considered to be congenital, we think that some of these polyps could develop after birth because all of our patients first showed clinical symptoms in adulthood. Because fibroepithelial polyps in adults are rare, some of these cases can be misdiagnosed as urothelial neoplasms or reactive conditions. 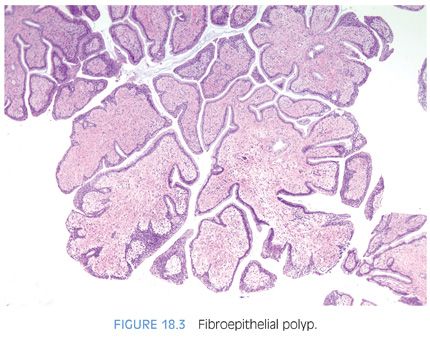 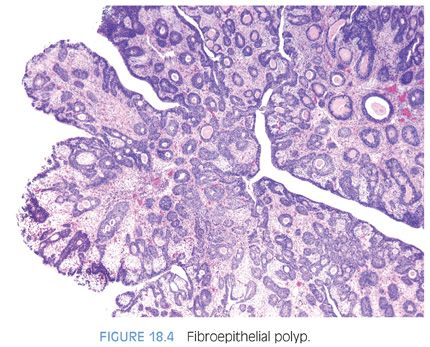 Posterior urethral polyps are benign polypoid lesions arising from the verumontanum.11 Most commonly, patients complain of urinary obstruction, hematuria, or complete urinary retention. These lesions almost exclusively occur in boys younger than 10 years of age. Histologically, they are characterized by a polypoid lesion lined by normal urothelium. The lesion has a simple morphology without branching papillae and appears to be a polypoid lesion as a result of edematous stroma. 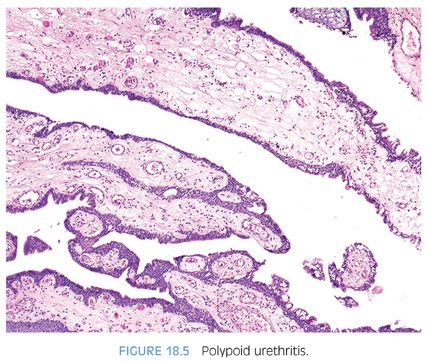 Nephrogenic adenomas usually arise in the setting of prior urothelial injury such as past surgery (60%), calculi (14%), or trauma (9%). Eight percent have a history of renal transplantation. In one-third of patients, the lesion is found in patients younger than 30 years of age. Histogenetically, nephrogenic adenomas were thought to have a metaplastic origin in reaction to prior injury and have, therefore, been also designated as nephrogenic metaplasia. Recently, an intriguing and elegant study was able to demonstrate a derivation from renal tubular cells occurring in renal transplant patients.12 Analyzing sex chromosomes using fluorescence in situ hybridization (FISH) in nephrogenic adenomas occurring in patients who received their renal graft from an opposite sex donor, Mazal et al.12 were able to show that all nephrogenic adenoma lesions in their study contained the donor kidney sex chromosome makeup. Additional support for nephrogenic adenomas arising from shed renal tubular cells is positivity for PAX2 and PAX8, a transcription factor expressed during renal development.13

Nephrogenic adenomas appear as papillary, polypoid, hyperplastic, fungating, friable, or velvety lesions. Typically found in the bladder, 12% are seen in the urethra. Most nephrogenic adenomas measure less than 1 cm, although they may attain dimensions as large as 7 cm. In 18% of cases, multiple lesions are identified. Lesions occurring in the prostatic urethra may be confused with adenocarcinoma of the prostate.14,15

Nephrogenic adenomas have a broad histologic spectrum (Table 18.1; eFigs. 18.9 to 18.29). The urothelial surface is often replaced by a flat cuboidal line epithelium.13 Proliferations of small solid to hollow tubules, lined by low columnar to cuboidal epithelial cells with eosinophilic cytoplasm, are identified in the majority of cases (Fig. 18.6). Vascular-like structures with attenuated epithelium, with or without hobnail nuclei, are the second most common pattern (Fig. 18.7). Verification that these vascular-like structures are epithelial can be accomplished with immunohistochemistry for cytokeratin, which can help establish the correct diagnosis. Papillary configurations and signet-ring cell–like structures are identified in a decreasing percentage of cases (Figs. 18.8 and 18.9). A distinguishing feature of nephrogenic adenoma is the presence of a thickened hyaline sheath around some of the tubules, which may be enhanced with periodic acid-Schiff (PAS) stains (Fig. 18.9). Most cases of nephrogenic adenoma are composed of multiple histologic patterns, with a minority consisting of small tubules alone. 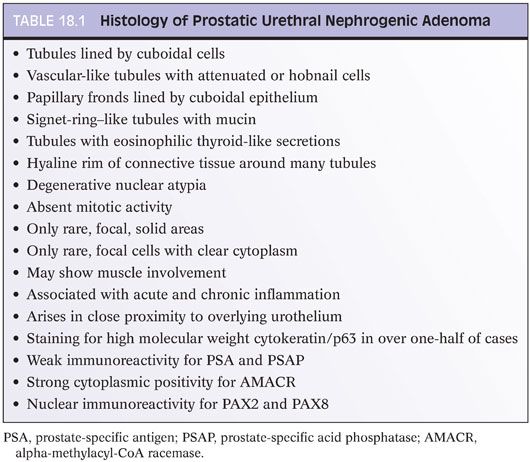 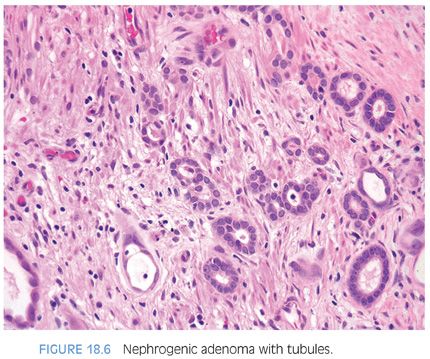 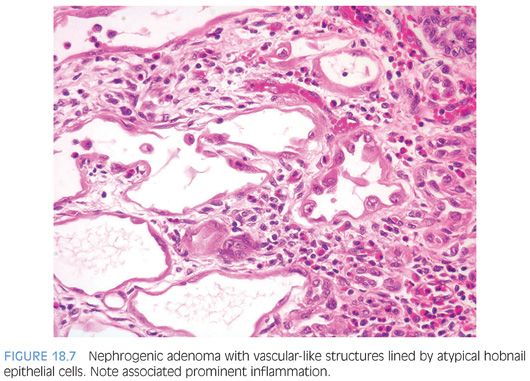 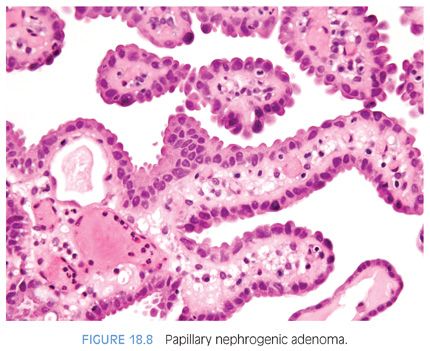 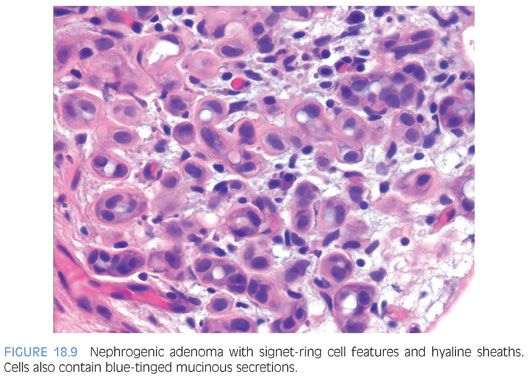 Nuclear atypia, when present, appears degenerative and mitoses are either absent or rare. Nuclei are enlarged and hyperchromatic, yet have a smudged indistinct chromatin pattern. These atypical nuclei often reside in cells with an endothelial or hobnail appearance lining vascular-like dilated tubules (Fig. 18.7). The presence of prominent nucleoli in many cases examined is also a source of possible confusion with prostate cancer. However, prominent nucleoli are usually only focally present within a lesion and often seen in association with degenerative nuclear atypia or with other features not commonly seen in prostate cancer such as hobnail-like cells or peritubular hyaline sheaths. The atypia in nephrogenic adenoma also differs from the atypia seen in clear cell adenocarcinomas of the urethra, which can, in some cases, closely resemble nephrogenic adenoma.16 In clear cell adenocarcinomas mimicking nephrogenic adenoma, the distinguishing features are diffuse nuclear hyperchromasia, mitotic figures, and more extensive muscle invasion (Fig. 18.10). 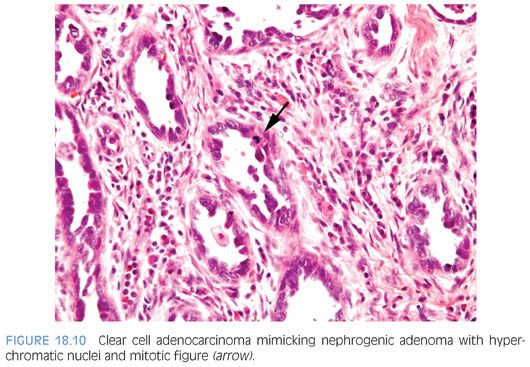