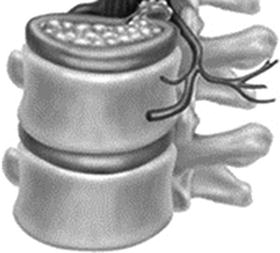 Hinge motion shows angular motion on one plane, namely, flexion and extension, for example, knee joint and humeroulnar joint.
Knee joint functions not only angular motion on one plane as hinge joint, but also sliding motion on the contact surface because the medial femoral condyle and lateral femoral condyle have different shapes (Fig. 2.3). Knee joint includes femorotibial joint and patellofemoral joint. As specific characteristics of the knee joint, medial and lateral meniscus exist between the femorotibial joint. Femorotibial joint is supported by many ligaments including patellar ligament, medial and lateral collateral ligament, popliteal ligament, and anterior and posterior cruciate ligament.

Ball-and-socket joint consists of the hemispherical bony head and the concave bony fossa such as hip joint (femoral head and acetabulum) and shoulder joint (humeral head and glenoid cavity). This joint shows a large range of motion because of triaxial motion.
Hip joint is anatomically ball-and-socket joint and has a large range of motion, including flexion, extension, abduction, adduction, internal rotation, and external rotation (Fig. 2.5). Hip joint has also an important role as a weight-bearing site. The femoral head and the acetabulum have thick articular cartilage. Hip joint is stabilized by many ligaments, such as iliofemoral ligament, pubofemoral ligament, ischiofemoral ligament, transverse ligament, and ligamentum teres, and muscles. The joint cavity is so small that synovial inflammation leads to the increase of the joint pressure due to increased synovial fluid. 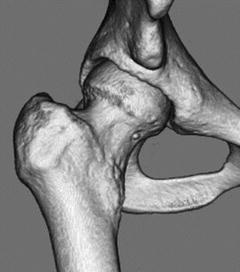 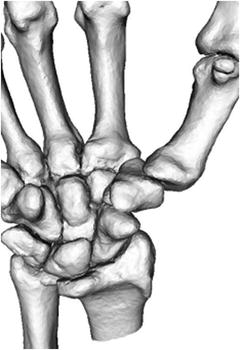 Generally, one joint surface is convex, whereas the other is concave. The convex side of the joint usually has a larger articular surface than the concave side. The concave side of the joint is often augmented by a pliable dense fibrous component, for example, the labrum of the hip (Fig. 2.7) or the meniscus of the knee, that has an important role in normal function. The complementary shapes of the surfaces are necessary to permit the normal range of motion for that particular joint as well as to provide stability and ensure the most equitable loading during use. 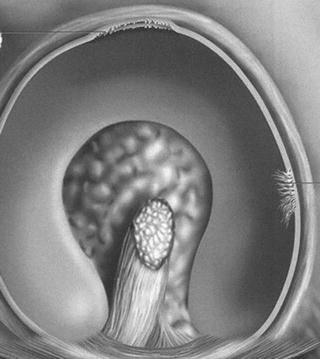 The labrum of the hip
In some ball-and-socket joints, for example, the hip and the ankle joint, the articular surfaces appear to fit exactly, while in other joints, for example, the knee and finger joints, it is readily apparent that the surfaces are incongruent. In many joints, of which the knee is a notable example, the gross incongruence of the opposed surfaces is partially compensated for by the interposed, pliable intra-articular fibrocartilaginous menisci.
Because the tissues of a joint undergo elastic deformation under load, as the load increases, the surfaces of the joint come into increasing contact, thereby distributing the load more equitably. Both the incongruence and the deformation of the joint space under loading conditions provide for the circulation of the synovial fluid essential to the metabolism of the chondrocytes.

The mechanism of the joint includes the articular cartilage, the bone beneath the cartilage, the ligaments that conjoin the articular bone ends, and other structures. Alterations in the mechanical properties of bone or disruption of the ligaments may have equally disastrous effects on the joint function as alterations in cartilage properties.
The physical properties of connective tissues are determined by their extracellular matrices. In each connective tissue, the matrices have a unique composition and organization that provide for mechanical function at that locus. The connective tissue matrices are both synthesized and broken down by their intrinsic cells including osteoblast, osteocytes, osteoclast, and chondrocytes. In maintaining the physicochemical and mechanical properties of tissues, the function of these cells must be subjected to highly sensitive feedback systems involving both local and systemic factors. 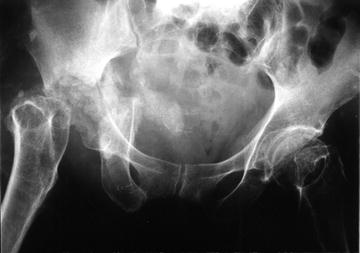 According to Wolff’s law, bone density and bone architecture correlate with the magnitude and direction of applied load [2]. In the articular end of a bone, this implies that subchondral bone trabeculae must also undergo a self-regulated modeling that maintains a joint shape capable of optimal load distribution. The shape of the articular end reflects a dynamic state that also incorporates a feedback dependent on mechanical stress. Endochondral ossification is exemplified in the epiphyseal growth plate, where calcified cartilage is invaded by blood vessels from the metaphyseal bone and replaced by bone tissue synthesized by osteoblasts lying close to the invading blood vessels.
Blood vessels from the subchondral bone penetrate the calcified zone of the articular cartilage. The calcified cartilage is slowly replaced by new subchondral bone. The thickness of the calcified zone of articular cartilage remains much the same throughout life because the tidemark continues to advance into the noncalcified cartilage at a slow rate that is in equilibrium with the rate of replacement from the subchondral bone. The extracellular matrix and the chondrocytes are replaced throughout life, and the joint undergoes continuous remodeling.

The articular ends of the bones are covered by hyaline cartilage, which is a bloodless and firm tissue. Hyaline cartilage deforms under pressure but slowly recovers its original shape on removal of pressure. In young individuals, articular cartilage is translucent and bluish white while in older individuals, it is opaque and slightly yellowish probably related to a number of factors, including dehydration of the tissues, increased numbers of cross-linkages in the collagen, and the accumulation of lipofuscin pigment in the tissues. 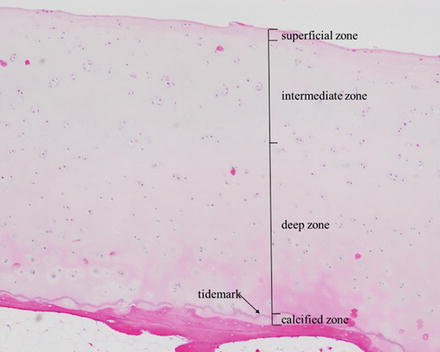 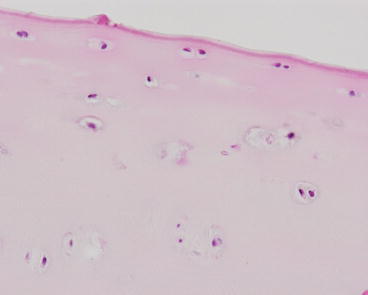 Superficial/tangential zone (hematoxylin–eosin ×200)
In the superficial layer, the cells are relatively small and flat, oriented with their long axis parallel to the surface. In the surface layer of articular cartilage, the collagen fibers are closely packed and oriented parallel to the joint surface. The collagen content of cartilage progressively diminishes from the superficial to the deep layer, and in deeper layers the collagen fibers are more widely separated, thicker in diameter, and vertically aligned in such a fashion as to form a web of arch-shaped structures. The superficial layers of the cartilage contain much less proteoglycan than the deeper layers. In the deeper layers, there is a higher concentration of staining of the proteoglycans with safranin O and methylene blue around the cells, the pericellular matrix, than between the cells, the intercellular matrix. 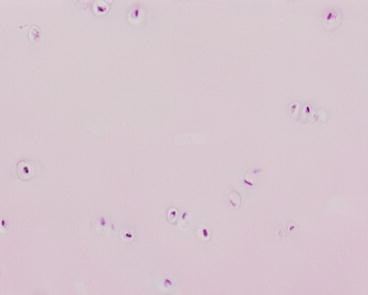 Intermediate/transitional zone (hematoxylin–eosin ×200)
In the intermediate zone, the cells are larger and rounder, but also sparse and randomly distributed. The collagen fibers are continuous with those in the tidemark and the calcified layer of cartilage but not with those of the underlying subchondral bone. 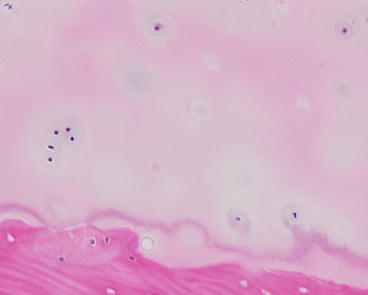 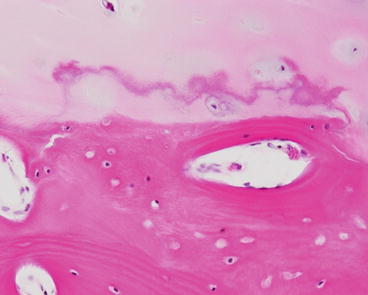 Calcified zone (hematoxylin–eosin ×200)
The calcified zone is adjacent to the bone, and the cells are mostly nonviable and the matrix heavily calcified. Blood vessels flow into this zone form the adjacent bone tissue and bone remodeling always occurs in this zone. The thickness of the calcified zone decreases in the older individuals. The boundary between the calcified zone and the subchondral bone is the bone/cartilage transitional area.

Fibrocartilage is a tissue in which is rounded with a halo of proteoglycan around them. It is found at the insertions of ligaments and tendons into the bone and on the inner side of tendons as they angle around pulleys. The second type of non-hyaline cartilage, elastic cartilage, contains a high proportion of elastic fibers in the matrix. It is present in the ligamentum flavum, external ear, and epiglottis, where some element of stretch is necessary in the tissue.

Chondrocytes occupy only 2–3 % in volume in the articular cartilage. Chondrocytes exist in the cartilage matrix which consists of collagen and proteoglycan they produce. Cartilage components include water in about 80 % of wet weight, collagen in 20 %, and proteoglycan in 5 % [3]. The two main components of the extracellular matrix of articular cartilage are type II collagen and aggrecan, both of which are almost specific to this tissue. Collagen acts to maintain structure, to absorb impact, and to keep proteoglycan. Proteoglycan has a negative charge and draws water into the cartilage matrix. Thus, cartilage possesses adequate viscosity and resistance to pressure.
Only gold members can continue reading. Log In or Register to continue