The anterior fibromuscular stroma, which occupies approximately one-third of the prostate, contains very few glands and consists of smooth muscle tissue and dense fibrous tissue. The central zone forms a cone-shaped volume surrounding the ejaculatory ducts with its apex at the verumontanum and its base at the bladder neck. The peripheral zone is the largest zone and contains 75% of the glandular tissue of the prostate. The peripheral zone is distal to the central zone and corresponds to a horseshoe-shaped structure extending posteriorly, posterolaterally, and laterally around the inner aspect of the prostate. The most critical area of the preprostatic region is the transition zone, which is most affected by hyperplasia. The rationale for separating the outer aspect of the prostate into central and peripheral zones is in part based on both histologic differences and differences in the diseases affecting these two areas. From a diagnostic standpoint, central zone histology may mimic high-grade prostatic intraepithelial neoplasia (PIN) (see Chapter 5). The peripheral zone is much more frequently affected by carcinoma. The central zone is an uncommon site for origin of carcinoma, although it may be secondarily invaded by large peripheral zone tumors. Despite these differences, experts in the field still find difficulties in distinguishing between the central and peripheral zones and often will combine them into one zone when investigating various aspects of prostatic disease. From this standpoint, McNeal’s1 more complicated scheme is often simplified into a two-zone concept, corresponding to the inner (transition zone) and outer (peripheral and central zones) sections of the prostate.

Rather than provide a complete description of the histology of the prostate, this section will only emphasize those aspects that affect interpretation of prostate biopsy material. The discussion of some topics of prostate histology (i.e., neuroendocrine differentiation) will be deferred to sections of the book dealing with pathology related to these topics. The prostate consists of epithelial and stromal cells. The epithelial cells are arranged in glands consisting of ducts, which branch out from the urethra and terminate into acini. Distinction between a prostatic duct and acinus primarily is based on its architecture as determined on low magnification. Ducts consist of elongated tubular structures with branching as opposed to acini, which are more rounded structures grouped in lobular units. Smaller ducts cut on cross section are indistinguishable from acini.

Epithelial cells in the prostate are (a) urothelial (transitional) cells, (b) secretory cells, (c) basal cells, and (d) neuroendocrine cells. The proximal portions of the prostatic ducts are lined by urothelium similar to the urethra. In distal portions of the prostatic ducts as well as in scattered prostatic acini, there may be alternating areas of cuboidal and columnar epithelium admixed with urothelium. When urothelium is seen within the more peripheral prostatic ducts and acini, it is referred to as urothelial metaplasia (Fig. 3.2, eFigs. 3.1 to 3.3). Urothelial metaplasia may be a misnomer in that there is no evidence that this process results from metaplasia of a different epithelial cell type. It may be seen in infants and neonates throughout the prostate (author’s personal observations). The urothelium is composed of spindle-shaped epithelial cells with occasional nuclear grooves, which are often oriented with their long axes parallel to the basement membrane. Urothelium may undermine the cuboidal pale-staining prostatic glandular epithelium. 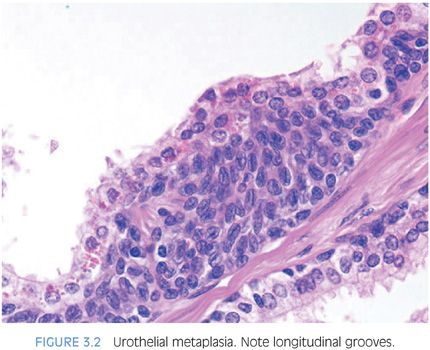 Columnar secretory epithelial cells are tall with pale to clear cytoplasm (eFigs. 3.4 and 3.5). These cells are terminally differentiated and stain positively with prostate-specific antigen (PSA), and prostate-specific acid phosphatase (PSAP). Secretory cells lack immunoreactivity with antibodies to high molecular weight cytokeratin.6 Corpora amylacea are seen in approximately 25% of prostate glands in men aged 20 to 40 years, whereas they are rare in carcinomas.7,8 Corpora amylacea are round laminated hyaline eosinophilic structures that may become calcified (eFig. 3.6). Although lipofuscin was initially thought to be diagnostic of seminal vesicle epithelium, it may be seen in approximately 50% of cases of benign prostate glands in hematoxylin and eosin (H&E)–stained sections and in almost all cases when studied by special stains such as Fontana-Masson.9 On H&E-stained sections, these granules may be either yellow-brown or pale gray-brown with a dark blue rim (Fig. 3.3, eFigs. 3.7 to 3.12). 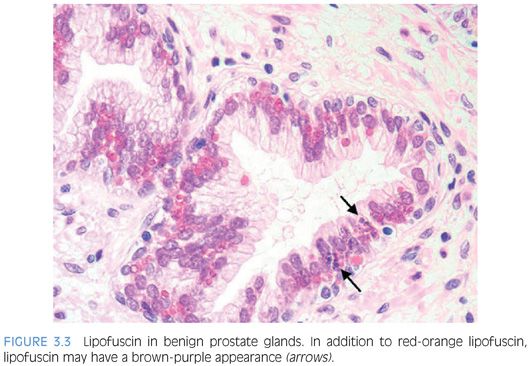