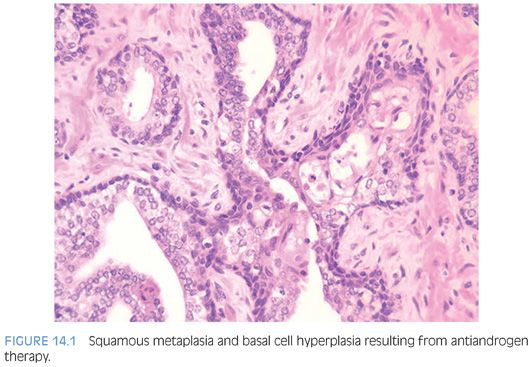 Therapy with LHRH agonists and flutamide may result in three different histologic patterns in prostate cancer. The neoplastic acini may become atrophic (Fig. 14.2, eFigs. 14.6 to 14.12).4,7–13 At higher power, these neoplastic glands are identical to benign atrophic glands. Only their crowded infiltrative appearance or location outside of the prostate is diagnostic of adenocarcinoma. Furthermore, there may be other areas of the tumor that do not show as prominent response to hormonal therapy and are more recognizable as carcinoma. The second pattern is when the atrophic neoplastic glands develop pyknotic nuclei and abundant xanthomatous cytoplasm (Figs. 14.3 and 14.4). These cells then desquamate into the lumen of the malignant glands where they resemble histiocytes and lymphocytes (Fig. 14.5, eFigs. 14.13 to 14.17). The fact that they are still identifiable as glandular structures is helpful in establishing the diagnosis. There may be areas where only scattered cells resembling foamy histiocytes with pyknotic nuclei and xanthomatous cytoplasm are visible. These cells, however, are pancytokeratin-positive demonstrating their epithelial nature. The third pattern is when there are individual tumor cells resembling inflammatory cells. At low power, these areas may be difficult to identify, and often, the only clue to areas of hormonally treated carcinoma is a fibrotic background with scattered cells with tumor cells identified at higher magnification. Immunohistochemistry for prostate-specific antigen (PSA) or pancytokeratin can aid in the diagnosis of carcinoma in these cases by identifying the individual cells as epithelial cells of prostatic origin. Cancer cells following hormonal therapy demonstrate a lack of high molecular weight cytokeratin staining, identical to untreated prostate cancer. Following hormonal therapy, there may be a decrease in immunoreactivity with PSA, but most tumors maintain some labeling.14 Following a response to combination endocrine therapy, the grade of the tumor appears artifactually higher when compared to the grade of the pretreated tumor.11,15 Consequently, prostatic adenocarcinoma with significant treatment effect should not be assigned a Gleason grade. In a patient with prior hormonal therapy, if there is tumor without treatment affect, it can be graded as usual. 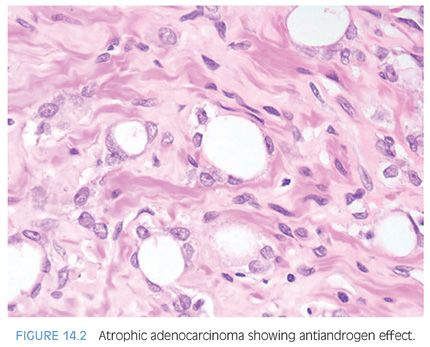 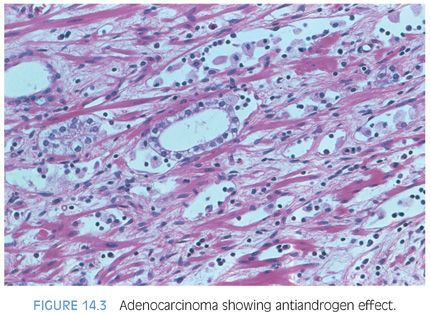 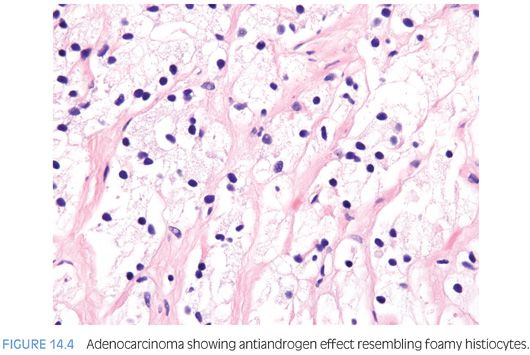 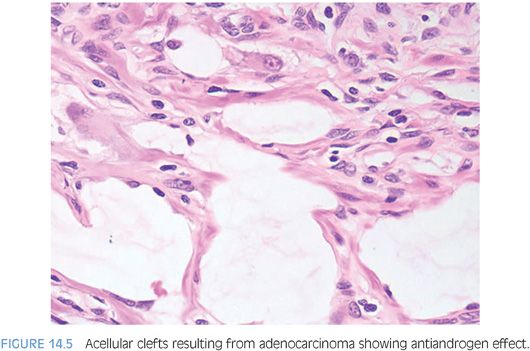 Several studies have demonstrated that the extent and prevalence of high-grade prostatic intraepithelial neoplasia (PIN) is substantially decreased in prostates that have been treated with androgen deprivation for 3 months prior to radical prostatectomy.16,17 High-grade PIN may still persist following androgen blockade therapy, although tufted PIN may be replaced by flat high-grade PIN.18 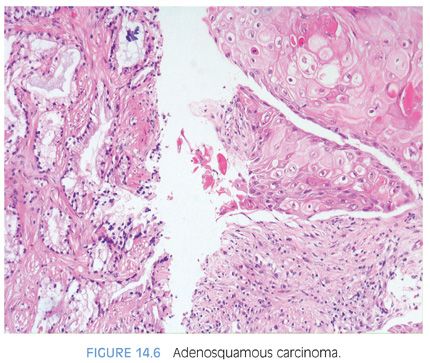 The use of radiotherapy as a primary treatment for clinically localized prostate cancer has been increasing. Typically, following radiotherapy, the serum PSA level will decrease to a nadir level. In some men, the PSA will then subsequently rise; a rise of ≥2 ng/ml above nadir PSA level is the most widely accepted definition of radiotherapy failure. It is controversial whether it is necessary to perform a biopsy to histologically demonstrate carcinoma if the serum PSA is rising after radiotherapy. Some experts argue that one can document that tumor is recurring following radiotherapy solely based on the rising serial PSA measurements and treat the patients, for example, with hormone therapy. Other oncologists feel more comfortable histologically documenting progression of cancer before initiating therapy. For more definitive therapy of postradiotherapy failures (i.e., salvage prostatectomy), where associated morbidity is higher, histologic documentation of recurrent cancer is mandatory. Often, pathologists will not get a history of prior irradiation, such that it is necessary for them to recognize the histologic features of radiation atypia in benign glands so as to avoid a misdiagnosis of cancer.

Within the nonneoplastic prostatic glands, radiation results in glandular atrophy, squamous metaplasia, and cytologic atypia23 (eFigs. 14.21 to 14.31). Although one may find vascular radiation changes, the stromal atypia characteristic of radiation in other organs is not usually seen. The distinction between irradiated nonneoplastic prostatic glands and carcinoma is best made on the low-magnification architectural pattern of the glands (Table 14.2). Within the radiated normal prostate, glands maintain their normal architectural lobular configuration. In contrast to carcinoma, the nonneoplastic glands are separated by a modest amount of prostatic stroma. On higher magnification, whereas glands of prostatic carcinoma are lined by a single cell layer, there is piling up of the nuclei within irradiated normal prostate as well as an occasional recognizable basal cell layer (Fig. 14.7). This piling up of the cells in radiated benign glands frequently appears slightly spindled resembling urothelial metaplasia. The finding of scattered markedly atypical nuclei within well-formed acini is typical of radiated benign glands and rare in prostate carcinoma. Prostate carcinomas that are sufficiently differentiated to form glands rarely manifest the degree of atypia seen with radiation, and if present, would be more uniformly present in all cells. Radiated nuclei also have a degenerative, hyperchromatic, smudgy appearance as opposed to malignant prostatic nuclei that usually contain prominent nucleoli. Irradiated nonneoplastic glands often are atrophic, in contrast to gland-forming prostatic adenocarcinomas that typically have abundant cytoplasm. It has been demonstrated that high molecular weight cytokeratin, p63, and/or alpha-methylacyl-CoA-racemase (AMACR) immunohistochemistry can aid in the diagnosis of irradiated prostate.24–27 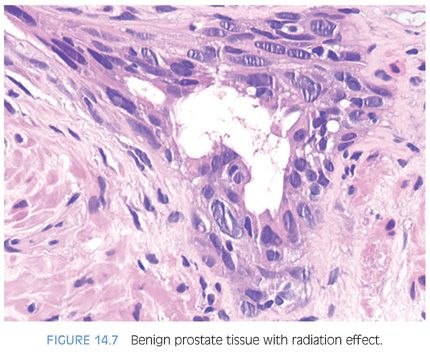 Although it may be difficult to diagnose high-grade PIN following radiation therapy, this diagnosis may occasionally be made in this setting.28 The typical nuclear changes of high-grade PIN characterized by prominent nucleoli are present, which differ from the degenerative smudgy chromatin seen with radiation atypia.

Radiated adenocarcinoma of the prostate may show either no recognizable difference from nonradiated cancer or the effects of radiation damage. In order to diagnose either pattern of cancer, the key feature is that architecturally, the findings are inconsistent with benign glands. The presence of closely packed glands with a haphazard infiltrative growth pattern is typical of adenocarcinoma and cannot be attributed to radiation change (Fig. 14.8). Similarly, the presence of infiltrating individual epithelial cells is diagnostic of carcinoma (Fig. 14.9). Cancers not showing any treatment effect have typical prostate cancer nuclei with prominent nucleoli and glands with a modest amount of cytoplasm (eFig. 14.32). Cancers with radiation effect demonstrate either glands or individual cells with abundant vacuolated cytoplasm or single cells with indistinct cytoplasm (eFigs. 14.33 to 14.56). Nuclei lack apparent nucleoli and are either large with bizarre shapes or pyknotic with smudged chromatin.4,12,29–32 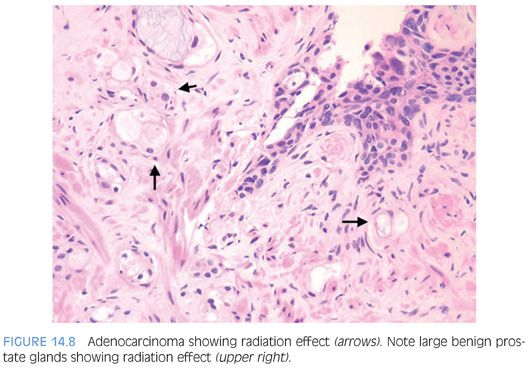 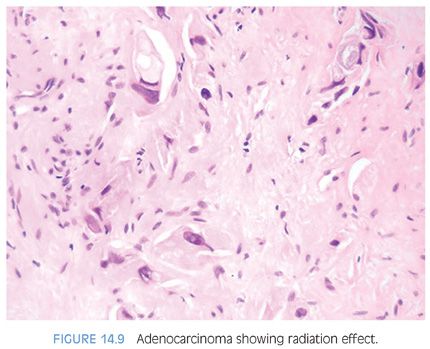 There are differences in the effect on the prostate depending on the type of radiation administered. Brachytherapy, also known as interstitial radiotherapy, where radioactive seeds are implanted in the prostate, results in more atypia in benign prostate glands than with external beam radiation therapy.32 Similarly, there is less decrease in the atypia in benign glands over time in men with brachytherapy. With external beam radiotherapy, the atypia in benign glands is less apparent after 4 years following therapy. Radiation atypia in benign glands can persist, especially with brachytherapy, for many years with prominent atypia seen as late as 6 years later. The best data on the significance of cancer with treatment effect is from Crook et al.33 They revealed that 2-year posttreatment biopsy status is a strong predictor of 5-year disease-free survival rate: 82% and 83% for negative and indeterminate (cancer with treatment effect) biopsies, respectively, versus 27% for positive biopsies without treatment effect.33

The expression of proliferation markers (PCNA/MIB-1) in postradiated cancer can also help predict clinical failure.34 Relatively few studies have been done on the immunohistochemistry of radiated prostate, with most cases showing retention of their PSAP and PSA positivity in almost all cases.14,29,35

Following radical prostatectomy, a needle biopsy of the prostatic fossa may be performed to detect recurrence. There are no uniform guidelines as to when postradical prostatectomy biopsies are performed to document postoperative failure. Practices range from routine biopsies in men with rising postoperative serum PSA levels to reliance on clinical findings to establish a diagnosis of recurrent prostate cancer. Several investigators have demonstrated the difficulty in diagnosing recurrent adenocarcinoma on biopsy, sometimes requiring the patient to have several needle biopsies over time.36–38 We have demonstrated that recurrent cancer on needle biopsy may be focal and difficult to diagnose, in part due to the limited extent of cancer seen on biopsy (Fig. 14.10, eFigs. 14.57 to 14.61).39 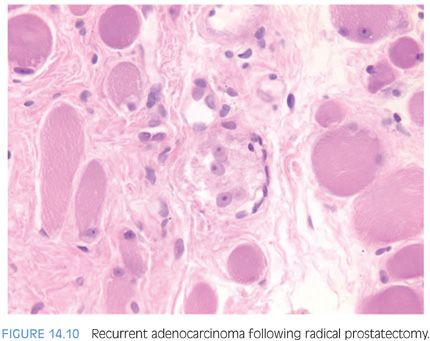