A 55-year-old man presents to the emergency department with a 2-week history of an expanding ulcer on his left lower leg. He has a history of chronic neutropenia and transfusion-dependent anemia secondary to myelodysplastic syndrome requiring chronic therapy with deferoxamine for hepatic iron overload. He first noticed a red bump on his leg while fishing at his cabin in the woods and thought it was a bug bite. It rapidly enlarged, first as a red swollen area, and then began to ulcerate. He was given dicloxacillin orally, but with no improvement. In the emergency department he is febrile to 39°C (102.2°F), and looks unwell. On his left leg he has a 6 by 12 cm black ulcer with surrounding swelling and erythema that is quite tender. His complete blood count demonstrates an absolute neutrophil count of 300 and a total white blood cell count of 1000. An immediate operative debridement yields pathologic specimens demonstrating broad club-like nonseptate hyphae and extensive tissue necrosis. What initial medical therapy would be most appropriate?

Human fungal infections have increased dramatically in incidence and severity in recent years, owing mainly to advances in surgery, cancer treatment, treatment of patients with solid organ and bone marrow transplantation, the HIV epidemic, and increasing use of broad-spectrum antimicrobial therapy in critically ill patients. These changes have resulted in increased numbers of patients at risk for fungal infections.

For many years, amphotericin B was the only efficacious antifungal drug available for systemic use. While highly effective in many serious infections, it is also quite toxic. In the last several decades, pharmacotherapy of fungal disease has been revolutionized by the introduction of the relatively nontoxic azole drugs (both oral and parenteral formulations) and the echinocandins (only available for parenteral administration). The new agents in these classes offer more targeted, less toxic therapy than older agents such as amphotericin B for patients with serious systemic fungal infections. Combination therapy is being reconsidered, and new formulations of old agents are becoming available. Unfortunately, the appearance of azole-resistant organisms, as well as the rise in the number of patients at risk for mycotic infections, has created new challenges

TABLE 48–1 Properties of conventional amphotericin B and some lipid formulations.1

Amphotericin B is poorly absorbed from the gastrointestinal tract. Oral amphotericin B is thus effective only on fungi within the lumen of the tract and cannot be used for treatment of systemic disease. The intravenous injection of 0.6 mg/kg/d of amphotericin B results in average blood levels of 0.3–1 mcg/mL; the drug is more than 90% bound by serum proteins. Although it is mostly metabolized, some amphotericin B is excreted slowly in the urine over a period of several days. The serum half-life is approximately 15 days. Hepatic impairment, renal impairment, and dialysis have little impact on drug concentrations, and therefore no dose adjustment is required. The drug is widely distributed in most tissues, but only 2–3% of the blood level is reached in cerebrospinal fluid, thus occasionally necessitating intrathecal therapy for certain types of fungal meningitis.

Amphotericin B is selective in its fungicidal effect because it exploits the difference in lipid composition of fungal and mammalian cell membranes. Ergosterol, a cell membrane sterol, is found in the cell membrane of fungi, whereas the predominant sterol of bacteria and human cells is cholesterol. Amphotericin B binds to ergosterol and alters the permeability of the cell by forming amphotericin B-associated pores in the cell membrane (Figure 48–1). As suggested by its chemistry, amphotericin B combines avidly with lipids (ergosterol) along the double bond-rich side of its structure and associates with water molecules along the hydroxyl-rich side. This amphipathic characteristic facilitates pore formation by multiple amphotericin molecules, with the lipophilic portions around the outside of the pore and the hydrophilic regions lining the inside. The pore allows the leakage of intracellular ions and macromolecules, eventually leading to cell death. Some binding to human membrane sterols does occur, probably accounting for the drug’s prominent toxicity. 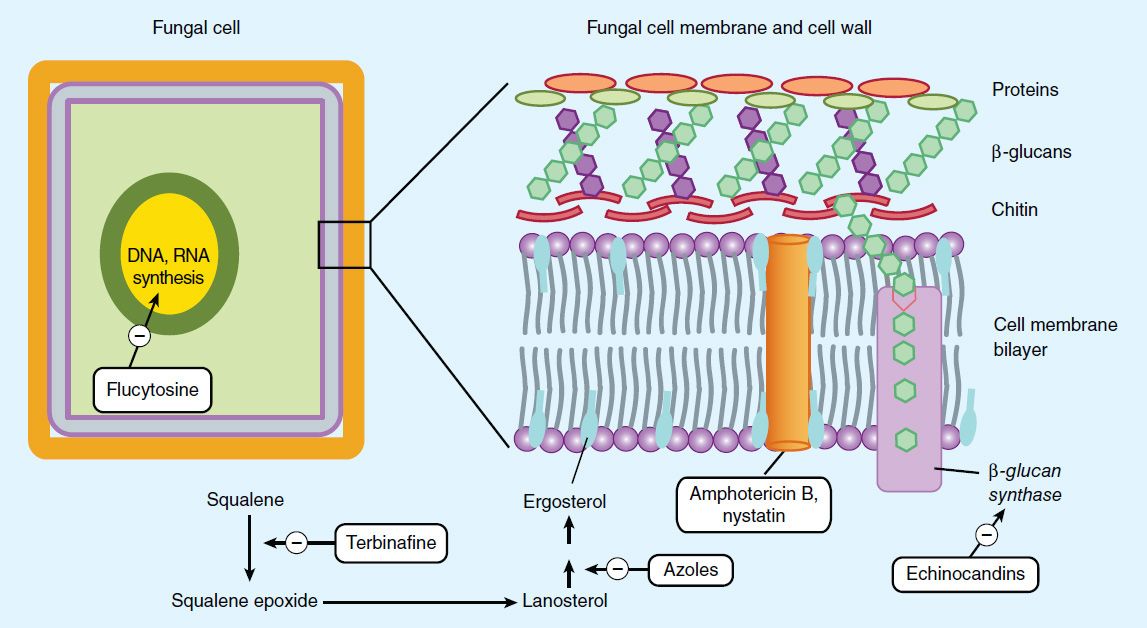 FIGURE 48–1 Targets of antifungal drugs. Except for flucytosine (and possibly griseofulvin, not shown), all currently available antifungals target the fungal cell membrane or cell wall.

Lipid Formulation of Amphotericin B

Therapy with amphotericin B is often limited by toxicity, especially drug-induced renal impairment. This has led to the development of lipid drug formulations on the assumption that lipid-packaged drug binds to the mammalian membrane less readily, permitting the use of effective doses of the drug with lower toxicity. Liposomal amphotericin preparations package the active drug in lipid delivery vehicles, in contrast to the colloidal suspensions, which were previously the only available forms. Amphotericin binds to the lipids in these vehicles with an affinity between that for fungal ergosterol and that for human cholesterol. The lipid vehicle then serves as an amphotericin reservoir, reducing nonspecific binding to human cell membranes. This preferential binding allows for a reduction of toxicity without sacrificing efficacy and permits use of larger doses. Furthermore, some fungi contain lipases that may liberate free amphotericin B directly at the site of infection.

Three such formulations are now available and have differing pharmacologic properties as summarized in Table 48–1. Although clinical trials have demonstrated different renal and infusion-related toxicities for these preparations compared with regular amphotericin B, there are no trials comparing the different formulations with each other. Limited studies have suggested at best a moderate improvement in the clinical efficacy of the lipid formulations compared with conventional amphotericin B. Because the lipid preparations are much more expensive, their use is usually restricted to patients intolerant to, or not responding to, conventional amphotericin treatment.

Resistance to amphotericin B occurs if ergosterol binding is impaired, either by decreasing the membrane concentration of ergosterol or by modifying the sterol target molecule to reduce its affinity for the drug.

Amphotericin B remains the antifungal agent with the broadest spectrum of action. It has activity against the clinically significant yeasts, including Candida albicans and Cryptococcus neoformans; the organisms causing endemic mycoses, including Histoplasma capsulatum, Blastomyces dermatitidis, and Coccidioides immitis; and the pathogenic molds, such as Aspergillus fumigatus and the agents of mucormycosis. Some fungal organisms such as Candida lusitaniae and Pseudallescheria boydii display intrinsic amphotericin B resistance.

Owing to its broad spectrum of activity and fungicidal action, amphotericin B remains a useful agent for nearly all life-threatening mycotic infections, although newer, less toxic agents have largely replaced it for most conditions. Amphotericin B is often used as the initial induction regimen to rapidly reduce fungal burden and then replaced by one of the newer azole drugs (described below) for chronic therapy or prevention of relapse. Such induction therapy is especially important for immunosuppressed patients and those with severe fungal pneumonia, severe cryptococcal meningitis, or disseminated infections with one of the endemic mycoses such as histoplasmosis or coccidioidomycosis. Once a clinical response has been elicited, these patients then often continue maintenance therapy with an azole; therapy may be lifelong in patients at high risk for disease relapse. For treatment of systemic fungal disease, amphotericin B is given by slow intravenous infusion at a dosage of 0.5–1 mg/kg/d. Intrathecal therapy for fungal meningitis is poorly tolerated and fraught with difficulties related to maintaining cerebrospinal fluid access. Thus, intrathecal therapy with amphotericin B is being increasingly supplanted by other therapies but remains an option in cases of fungal central nervous system infections that have not responded to other agents.

Local or topical administration of amphotericin B has been used with success. Mycotic corneal ulcers and keratitis can be cured with topical drops as well as by direct subconjunctival injection. Fungal arthritis has been treated with adjunctive local injection directly into the joint. Candiduria responds to bladder irrigation with amphotericin B, and this route has been shown to produce no significant systemic toxicity.

The toxicity of amphotericin B can be divided into two broad categories: immediate reactions, related to the infusion of the drug, and those occurring more slowly.

Infusion-related reactions are nearly universal and consist of fever, chills, muscle spasms, vomiting, headache, and hypotension. They can be ameliorated by slowing the infusion rate or decreasing the daily dose. Premedication with antipyretics, antihistamines, meperidine, or corticosteroids can be helpful. When starting therapy, many clinicians administer a test dose of 1 mg intravenously to gauge the severity of the reaction. This can serve as a guide to an initial dosing regimen and premedication strategy.