5.1 Overview of the Urinary System

The urinary organs extend from the abdomen through the pelvis. Since they are closely related to the genital organs, both groups of organs are often referred to collectively as urogenital organs. For didactic reasons, both systems will be discussed separately in the following chapters.

The urinary organs help regulate the level of water and minerals in the body, and thus help regulate osmotic pressure. They excrete end products of body metabolism and harmful substances into a watery fluid, the urine (the excreted metabolites are dissolved in the water component of urine). By regulating the amount of water in the body, the renes also influence blood pressure. Through excreting or retaining sodium, potassium, calcium and chloride ions, they are involved in regulating the level of these important electrolytes in blood. In addition, the blood’s acid-base balance is influenced by the excretion or retention of hydrogen ions. Many pharmaceutical substances are excreted through the renes. The renes also influence blood pressure by producing the enzyme renin, and the formation of red blood cells by producing the hormone erythropoietin. Lastly, they also play an important role in vitamin D metabolism. 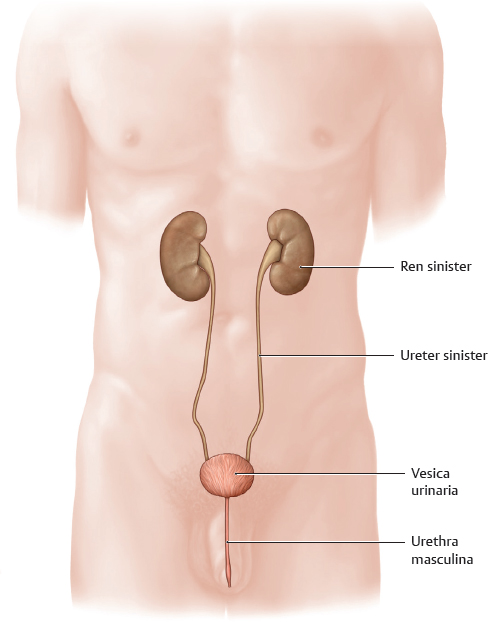 A Overview of the urinary organs

• the paired ureteres, which transport urine from the renes to the vesica urinaria;

• the unpaired vesica urinaria, which temporarily stores and discharges urine in a controlled manner; and 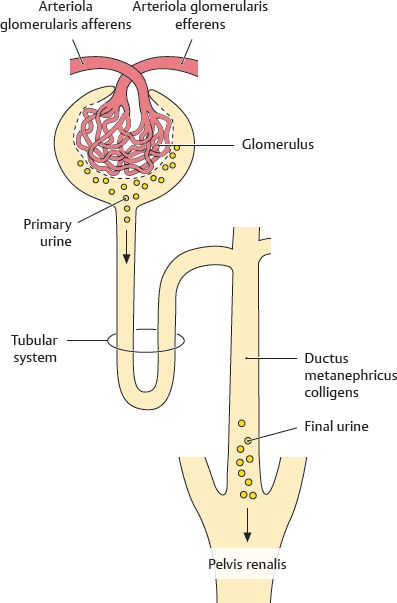 B Basics of urine production

The nephron, illustrated above, is the smallest functional unit of the renes (see p. 44).

In the glomeruli, richly branched capillary loops, which are supplied by branches of the aa. renales, drain an ultrafiltrate of blood called primary urine into a system of tubules. Adults produce approximately 170 liters of primary urine in 24 hours. However, in the tubular system, the primary urine is concentrated to 1% of its volume (by reabsorption of electrolytes and water back into the blood), and based on its composition, further modified with electrolytes and hydrogen ions. The volume of final urine formed in 24 hours is 1–2 liters. The final urine drains through ductus metanephrici colligentes into the pelvis renalis and then it is carried by the ureteres to the vesica urinaria.

C Location of the renes and ureteres

Horizontal section of the body at the level of the first vertebra lumbalis, viewed from above. Both renes are embedded in a fatty, connective tissue capsule (capsula adiposa). They are located in the spatium retroperitoneale with one on either side of the columna vertebralis. The spatium retroperitoneale also contains the ureteres (not visible in this section), which extend downward to the pelvis minor to reach the vesica urinaria. The hilum of each ren faces medially and anteriorly (red axes). 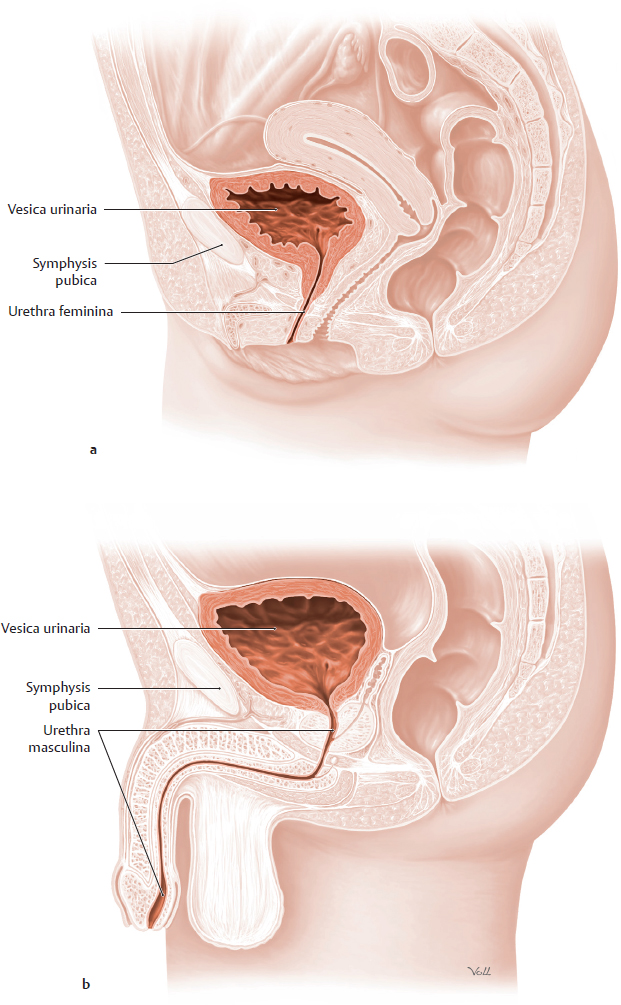 D Location of the vesica urinaria and urethra 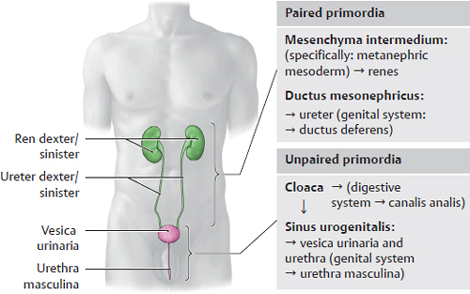 A Overview of the embryonic development of the urinary organs

• overlap with the digestive system: the canalis analis is derived from the cloaca. 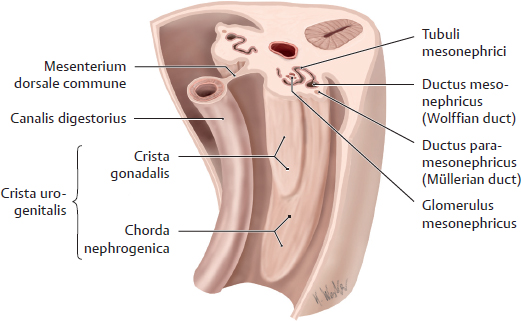 B The urogenital ridge (crista mesonephrica)

Posterior body wall of the embryo, viewed from the front and above. The renal and internal genital primordia border each other. They bulge ventrally into the body cavity in the form of two ridges: the chorda nephrogenica and the crista gonadalis or crista mesonephrica. The developing gonadae lie anteromedially to the developing ren systems. The ductus paramesonephrici (Müllerian ducts), which in females develop into the tubae uterinae and uterus, lie anterolaterally to the renal primordia. 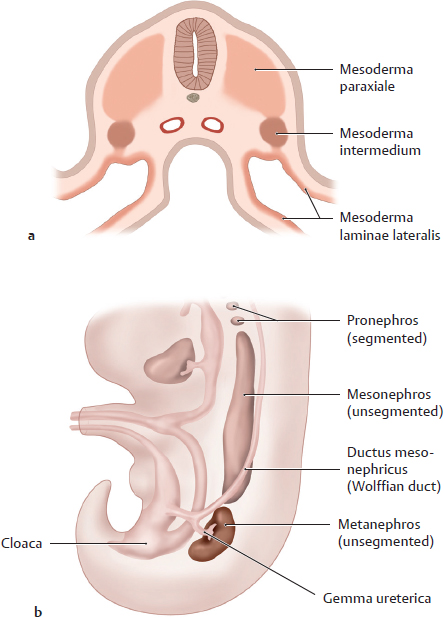