Oesophagus and Thymus and their Neurovasculature

14. Oesophagus and Thymus and their Neurovasculature 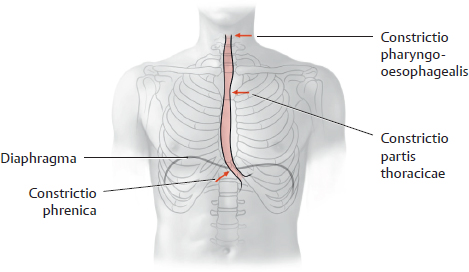 A Projection onto the skeleton thoracis

Anterior view. The oesophagus is located slightly to the right of the midline, especially in its course through the thorax, where it descends along the right side of the aorta. It pierces the diaphragma just below the processus xiphoideus of the sternum. The arrows mark the sites of the three normal anatomical constrictions of the oesophagus (see C). 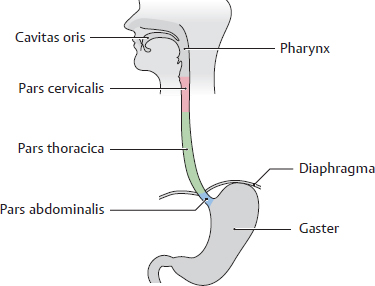 B Divisions of the oesophagus

Anterior view with the head turned to the right. The oesophagus is approximately 23–27 cm long, 1–2 cm in diameter, and is divided into three parts:

• Pars cervicalis: just anterior to the columna vertebralis in the neck, extends from C 6 to T 1.

• Pars thoracica: the longest part, located in the mediastinum superius and posterius, extends from T 1 to the hiatus oesophageus of the diaphragma (at approximately T 11).

• Pars abdominalis: the shortest part, located in the cavitas peritonei, extends from the diaphragma to the ostium cardiacum of the gaster. 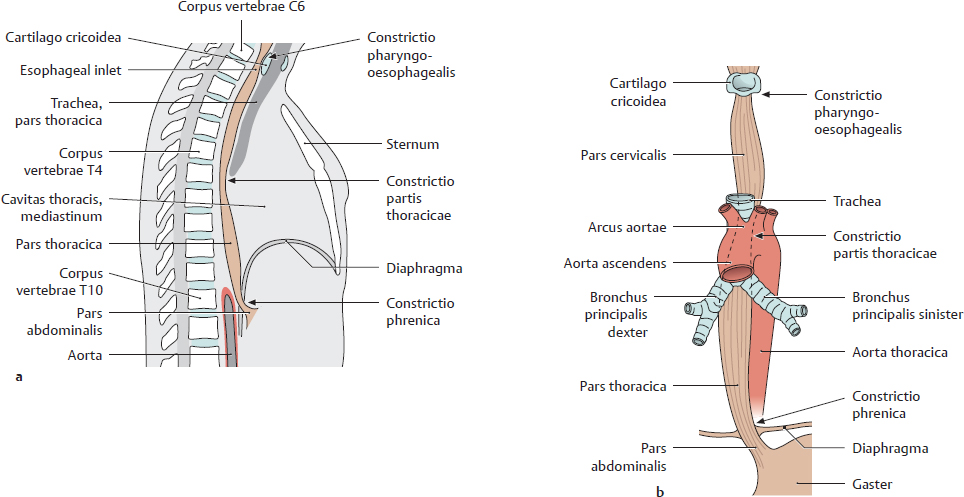 C Constrictions and curves of the oesophagus

• Upper constriction (constrictio pharyngooesophagealis, 14–16 cm from the incisor teeth), corresponds to the esophageal inlet in the pars cervicalis of the oesophagus (see p. 158). It is located where the oesophagus passes behind the cartilago cricoidea (C 6) and has a maximum width of approximately 14 mm.

• Middle constriction (constrictio partis thoracicae, 25–27 cm from the incisors), located where the oesophagus passes to the right of the arcus aortae and aorta thoracica (at T 4/T 5). Maximum width is 14 mm. 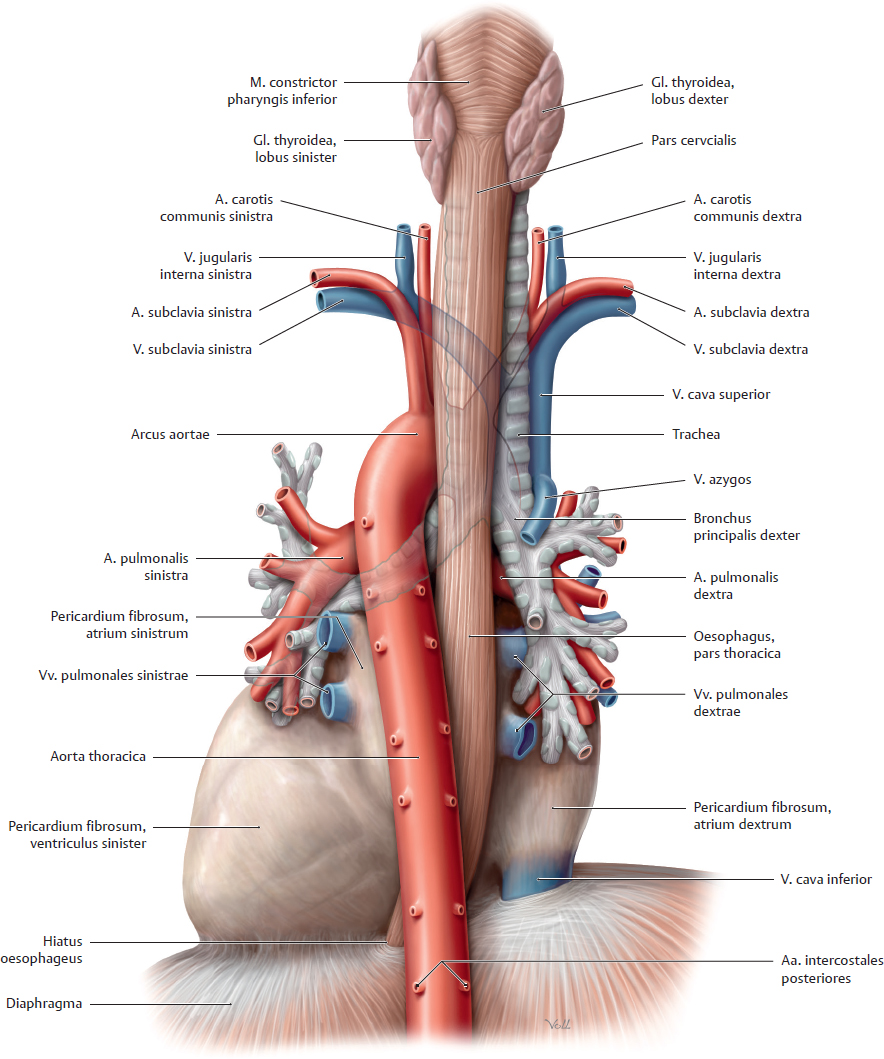 The relations of the oesophagus to the pericardium, great vessels, and trachea are depicted here. The close proximity of the oesophagus to the atrium sinistrum and pars thoracica aortae can be seen. Due to the asymmetrical position of the cor in the thorax, the vv. pulmonales dextrae are closer to the oesophagus than the vv. pulmonales sinistrae. The oesophagus initially descends to the right of the aorta, but just above the diaphragma it crosses in front of the aorta before piercing the diaphragma to enter the cavitas abdominis (see C). The oesophagus is loosely attached by its own connective tissue (tunica adventitia) to the connective tissue of the mediastinum (important for swallowing). It is stabilized somewhat by the attachment of its anterior wall to the back of the trachea, again by numerous slips of connective tissue.

Note: The trachea develops as an outgrowth from the oesophagus during early embryonic development, at which time a communication exists between the two structures. Normally this communication closes, but its persistence results in a tracheoesophageal fistula, which may allow food to enter the trachea and reach the lung, causing recurrent episodes of pneumonia. 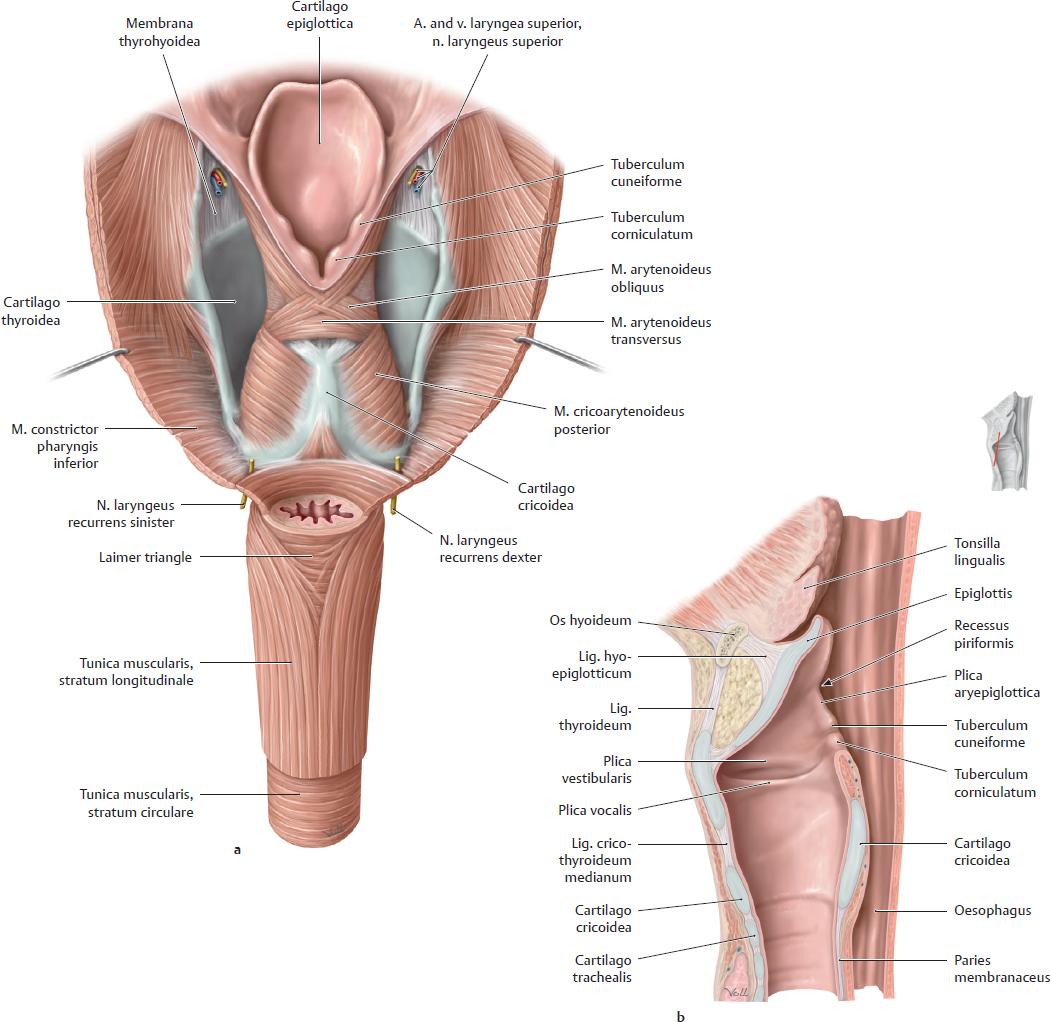 a Posterior view. The muscular posterior wall of the pharynx has been divided and reflected laterally, and the uppermost esophageal segment has been opened posteriorly. At the posterior junction of the longitudinal esophageal musculature with the pharyngeal musculature, the longitudinal muscles are thin and do not span the full circumference of the oesophagus. This area of muscular weakness (“Laimer triangle”) is a site of vulnerability for the development of diverticula (see p. 161). This diagram shows the oesophagus with an expanded, stellate lumen near the esophageal inlet, as it would appear during swallowing. While in the resting state, the esophageal inlet usually has the form of a transverse slit. The musculature of the upper oesophagus is a continuation of the (skeletal) musculi pharyngis and consists of striated fibers that give way distally to smooth muscle (not shown here).

b Midsagittal section, viewed from the left side. In the lateral view, both the tunica muscularis oesophagi and tunica mucosa oesophagi are visible. Additionally, the diagram shows the posterior dilation of the oesophagus, and thus the size of the oesophagus relative to the larynx. The constrictio pharyngooesophagealis, located behind the cartilago cricoidea, is also clearly visible. 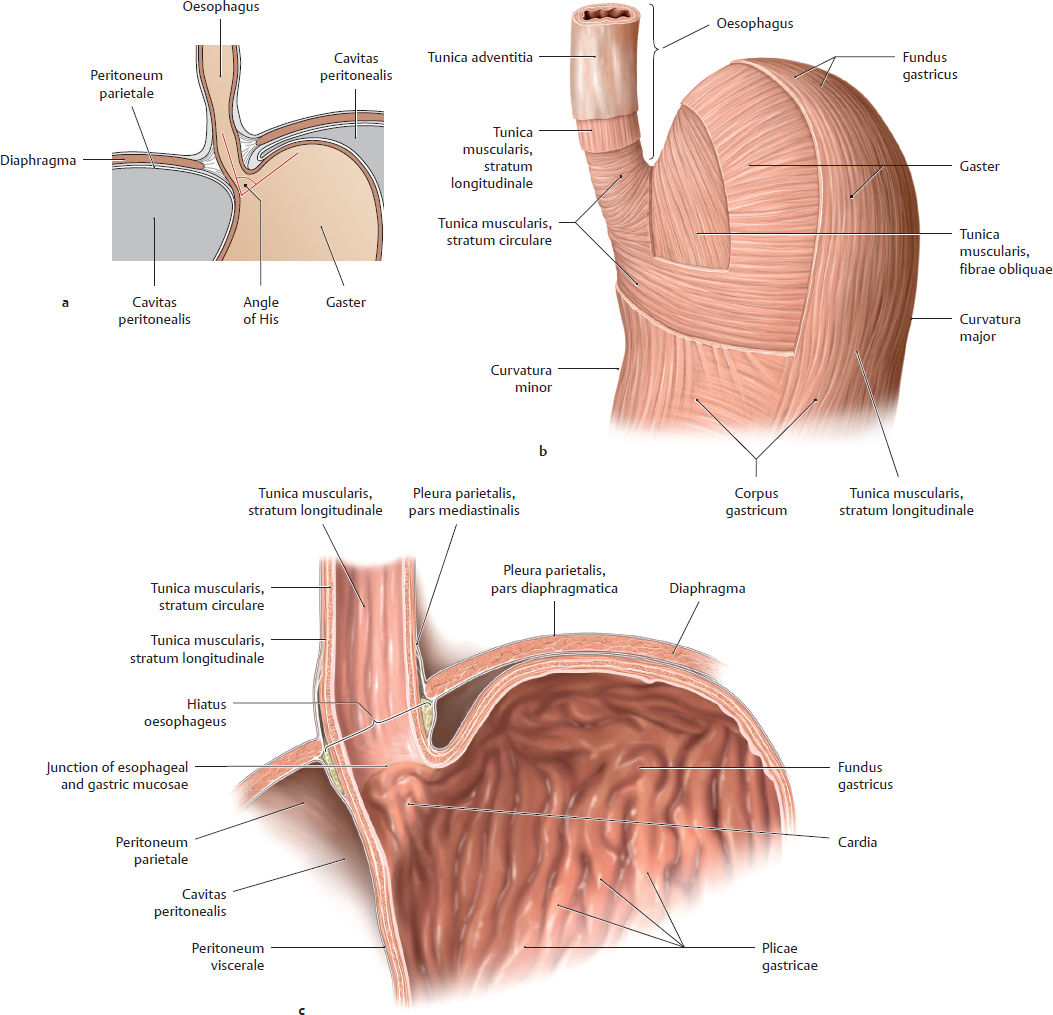 B Esophageal outlet and esophageal closure

Functional closure of the esophageal outlet is an important mechanism for preventing the backflow of gastric contents, especially hydrochloric acid, into the distal oesophagus (gastroesophageal reflux). This mechanism is essential because the tunica mucosa oesophagi, unlike the tunica mucosa gastris, is vulnerable to corrosive injury by stomach acid. As a result, repeated exposure to hydrochloric acid can cause esophageal inflammation (reflux esophagitis). Early, relatively mild forms of this reflux (“heartburn”) are often manifested by a burning retrosternal pain that is most pronounced in the supine position (at night). Effective closure of the oesophagus is based on several factors:

• Narrowing of the esophageal outlet by

– the circular muscles of the oesophagus (see b) and

• Continuity of the esophageal and gastric musculature (b), and the oblique angle at which the oesophagus joins the gaster just below the diaphragma (the angle of His, see a). 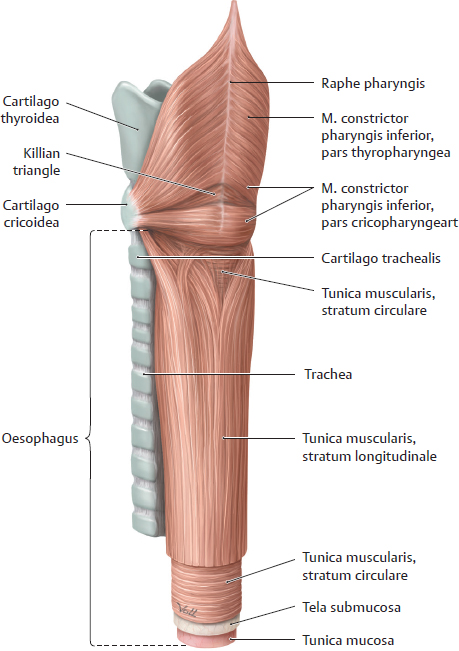 A Structure of the esophageal wall

Posterior view. Portions of the pharynx, larynx, and trachea are also shown; and the outermost layer (tunica adventitia, see B) has been removed. The esophageal wall has been telescoped to display both layers of the tunica muscularis (the strata circulare and longitudinale). They are connected to the mm. pharyngis at the esophageal inlet (hidden here by the pharynx). The muscles of the oesophagus can generate powerful peristaltic movements directed toward the gaster (actively propelling a food bolus to the stomach in 5–8 seconds), and they can reverse the direction of these movements during vomiting (antiperistalsis). 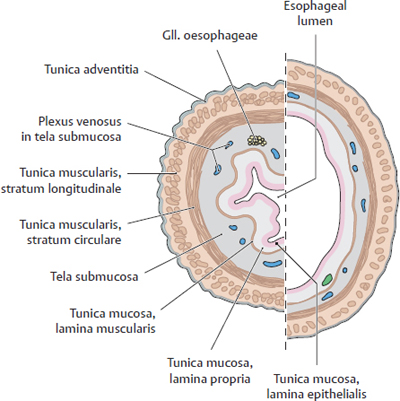 B Microscopic structure of the esophageal wall

Transverse section through an oesophagus in the contracted (left) and relaxed state (right). The layers of the esophageal wall are typical of a hollow viscus in the digestive tract:

• The tunica mucosa, which consists of an epithelial layer, lamina propria, and lamina muscularis. The epithelial layer is composed of stratified, nonkeratinized squamous epithelium (for mechanical resistance to food passage).

• The tunica muscularis, consisting of an inner layer of circular muscle and an outer layer of longitudinal muscle. Smooth-muscle contractions aid in the peristaltic propulsion of food. 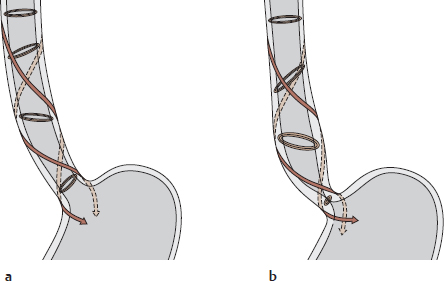 Tags: Internal Organs Latin nomenclature
Jan 19, 2017 | Posted by admin in ANATOMY | Comments Off on Oesophagus and Thymus and their Neurovasculature
Premium Wordpress Themes by UFO Themes
WordPress theme by UFO themes
%d bloggers like this: