7.1 Overview of the Lymphatic System 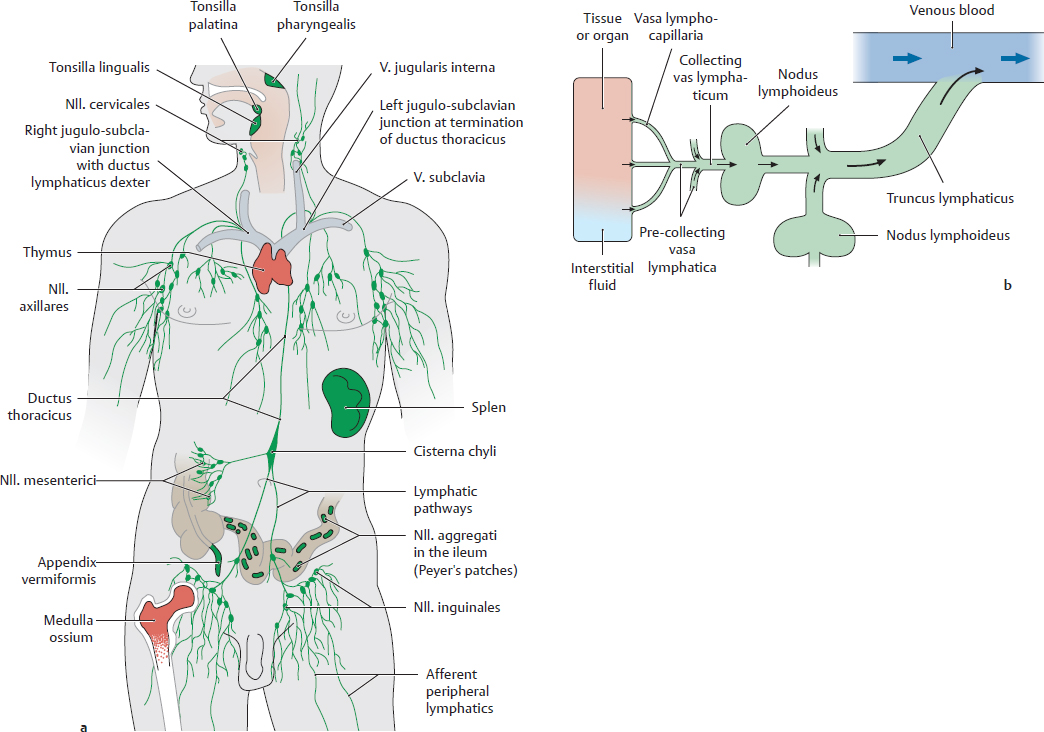 A Lymphatic organs and vessels

The lymphatic system, which is widely distributed throughout most of the body, consists of organa lymphoidea and vasa lymphatica. It has three main functions:

• Immunological defense (organa lymphoidea and vasa lymphatica). The main function of the immune response is to distinguish “self” from “non-self” (or foreign) substances (such as pathogens, or transplanted tissues) and destroy the “nonself” substances.

• Removal of lipids from the intestinum tenue while bypassing the hepatic portal system. This allows triglycerides to avoid hepatic metabolism and to be transported directly to organs that can utilize them.

a Organa lymphoidea: All organa lymphoidea have a stroma that is populated by lymphocytes that originated in medulla ossium (bone marrow). They are directly or indirectly responsible for eliminating antigens (immune response). Antigens are molecules (proteins, carbohydrates, lipids), which the immune system recognizes as foreign and mounts a defense against.

There are two types of lymphocytes, which can be further subdivided. (For more details see immunology textbooks.)

• B lymphocytes (“B” stands for bone marrow, where the cells are produced) differentiate into plasma cells, which produce antibodies. Antibodies are essential components of the humoral immune response. Humoral immunity refers to antibodies dissolved in blood and interstitial fluid that bind to antigens. Thus, the plasma cells are not directly involved in the immune response.

There are both organa lymphoidea primaria (red organs in a) and secundaria (green organs in a):

• In the organa lymphoidea primaria, lymphocytes derived from stem cells mature and become immunocompetent cells (meaning they are capable of distinguishing between self and nonself substances).

• From these organa lymphoidea primaria, lymphocytes migrate to the organa lymphoidea secundaria where they continue to proliferate and mature. They are then able to fulfill their specific roles in the immune response. Lymphocytes can leave an organ and enter the bloodstream.

The structure and function of the individual organa lymphoidea will be discussed in the respective organ chapters.

b Vasa lymphatica: Vasa lymphatica (green in a) are part of a tubular system that is distributed to all parts of the body (except for the CNS and medulla renalis). The vessels are responsible for absorbing fluid from the interstitial spaces (it is now called lymph) and transporting it to the venous blood. Vasa lymphatica start out as tiny, thin-walled capillaries (vasa lymphocapillaria), which drain into larger pre-collecting and collecting vessels (b). These eventually coalesce into trunci lymphatici. These trunks join to form two larger ducts that end at each of the two venous angles (the junction of the v. jugularis interna and v. subclavia), (see p. 58). Nodi lymphoidei are incorporated into the system of peripheral vasa lymphatica. Vasa lymphatica converge in the nodi lymphoidei, where the lymph is filtered and checked for pathogens as it passes through.

B Overview of the lymphatic pathways

Lymphatic pathways play a clinically significant role in the classification of tumors and their cells that metastasize to nodi lymphoidei. Since nodus lymphoideus metastases are sometimes discovered before the primary tumor, the organ where the cancer initiated can be determined from the affected nodi lymphoidei. Thus it is crucial to know the lymphatic pathways of organs and regions. The classification of lymph vessels and the nodi lymphoidei associated with them is illustrated below. If one follows the pathway the lymph travels from the site of origin until it flows into the venous blood stream, the basic classification becomes apparent:

• Lymph is formed by ultrafiltration from vasa capillaria in the connective tissue (C).

• There is a superficial and deep lymphatic network (D).

• 5 major trunci lymphatici drain lymph from all areas of the body (see p. 58).

• The nodi lymphoidei incorporated into the lymphatic system can be classified according to their location (see p. 59). 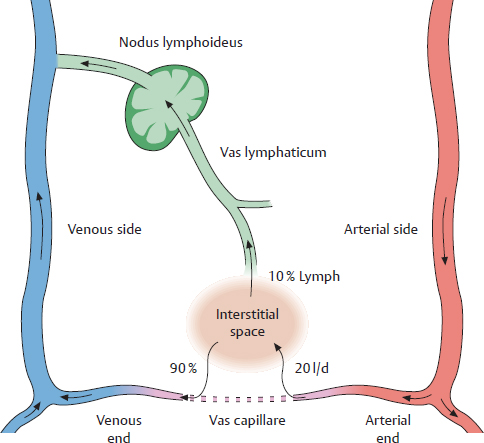 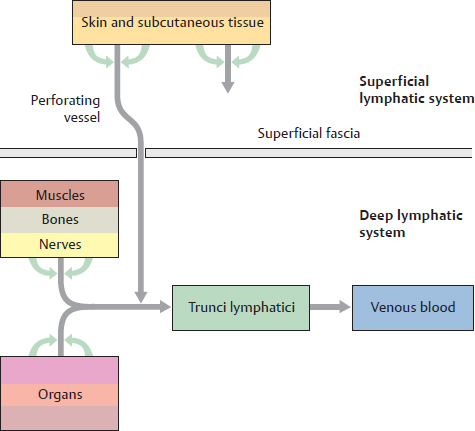