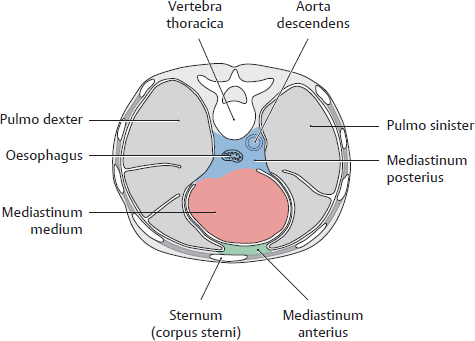 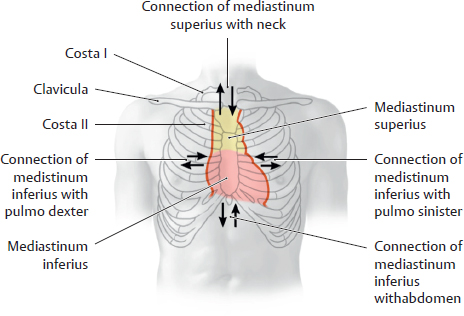 B Principal neurovascular structures that enter and leave the mediastinum

• The nn. vagus and phrenicus, veins (tributaries of the v. cava superior), oesophagus, and trachea enter the mediastinum superius from the neck.

• Arterial branches from the arcus aortae and the cervical part of the truncus sympathicus leave the mediastinum superius to enter the neck.

• The ductus thoracicus and ascending abdominal lumbar veins (the v. azygos on the right side, the v. hemiazygos on the left side) pass through the diaphragma to enter the mediastinum inferius.

• The nn. vagus and phrenicus, portions of the pars sympathica of the nervous system, the aorta, and the oesophagus descend from the mediastinum inferius and pass through the diaphragma to enter the abdomen.

Aa. and vv. pulmonales, vasa lymphatica, autonomic nerves (plexus pulmonalis), and the bronchi principales connect the mediastinum to the pulmones (and vice versa).

C Contents of the mediastinum (for divisions see A) 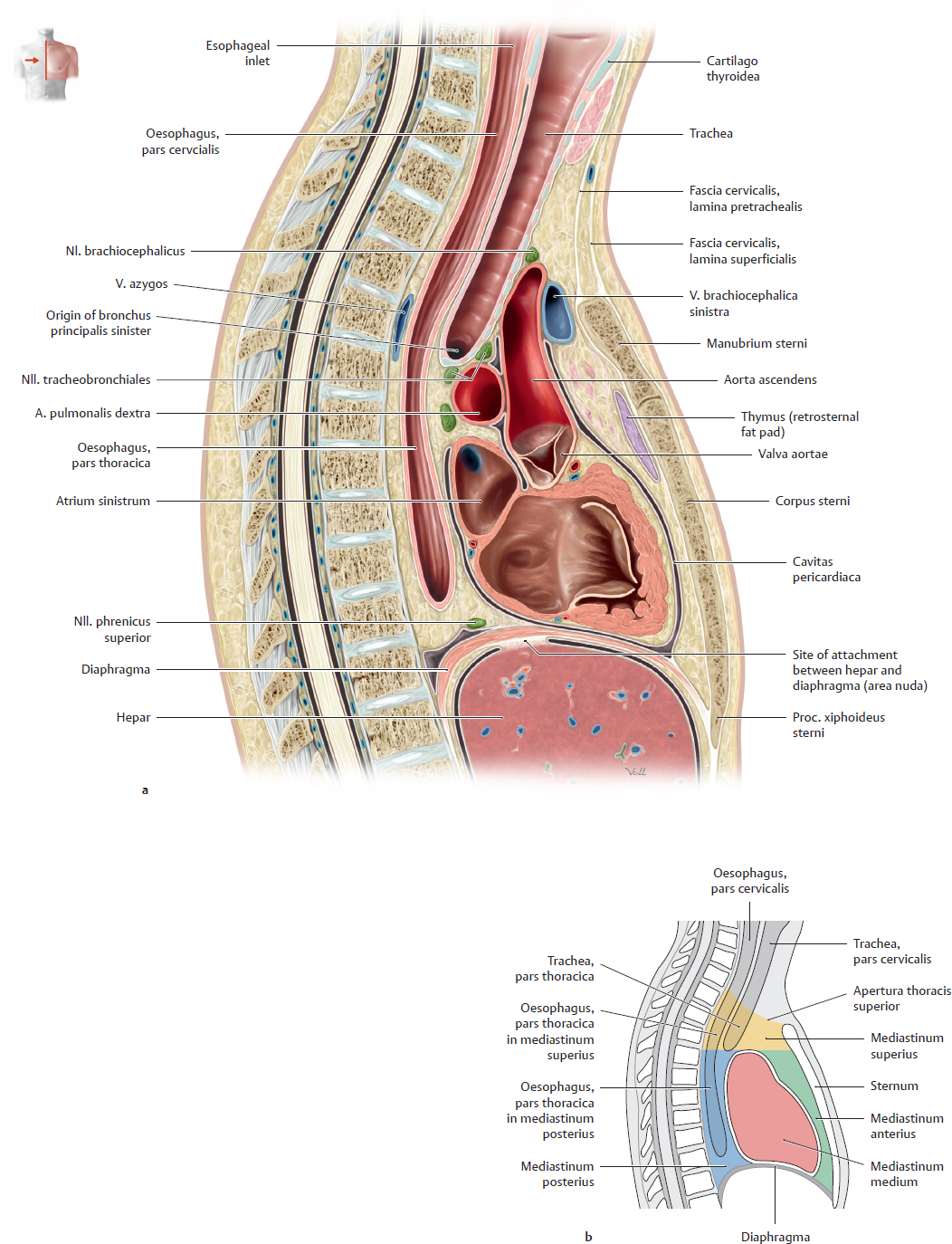 D Subdivisions of the mediastinum

Midsagittal sections viewed from the right side.

a Detailed view: simplified drawing of the pericardium, cor, trachea, and oesophagus in midsagittal section. This lateral view demonstrates how the atrium sinistrum of the cor narrows the mediastinum posterius and abuts the anterior wall of the oesophagus. Because of this proximity, abnormal enlargement of the atrium sinistrum may cause narrowing of the esophageal lumen that is detectable by radiographic examination with oral contrast medium. Radiologists call the area between the images of the cor and columna vertebralis the retrocardiac space.

b Schematic view: subdivisions of the mediastinum (described in A, with contents listed in C).

Note: Single diagrams cannot adequately show the components and configuration of the mediastinum, because of its asymmetry and extensions in all three axes. The anatomical relations in this space are best appreciated when viewed from multiple directions, at different planes (see also pp. 182 and 183).

10.2 Diaphragma: Location and Projection onto the Trunk 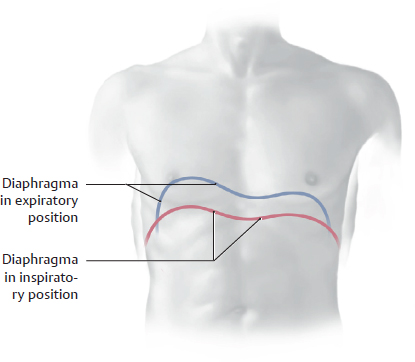 A Projection of the diaphragma onto the trunk

• The exact position of the diaphragma depends on body type, sex, and age.

• The left diaphragma leaflet is lower than the right due to the asymmetrical position of the cor.

• The diaphragma is higher in the supine position (pressure from the intra-abdominal organs) than in the standing position.

• The degree of diaphragmatic movement during inspiration can be assessed by noting the movement of the hepatic border, which is easily palpated.

• The diaphragma in a cadaver occupies a higher level than the expiratory position in vivo due to the loss of muscular tone. 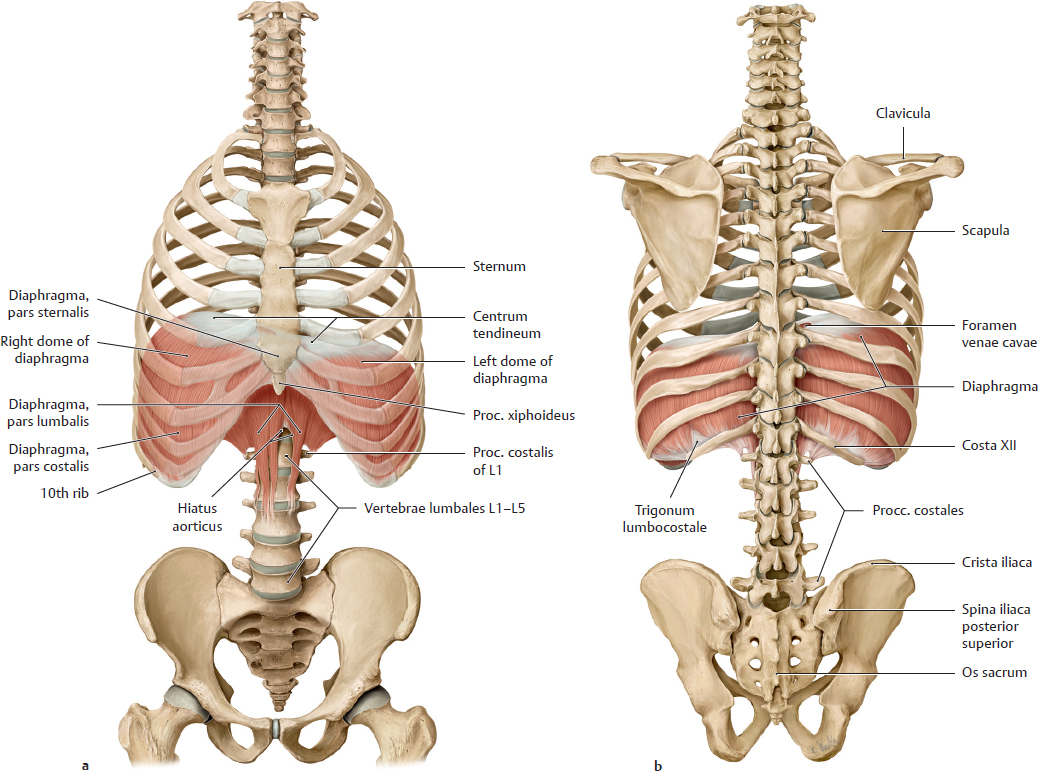