The Functional Lines (Fig. 8.1) extend the Arm Lines across the surface of the trunk to the contralateral pelvis and leg (or up from the leg to the pelvis across to the opposite rib cage, shoulder, and arm, since our meridians run in either direction). One of these lines runs across the front of the body, one across the back, so that the right and left lines together form an ‘X’ across the torso (Fig. 8.2/Table 8.1). A third line in this group, the Ipsilateral Functional Line, runs from the shoulder to the inside of the same knee. These lines are called the ‘functional’ lines because they are rarely employed, as the other lines are, in modulating standing posture. They come into play primarily during athletic or other activity where one appendicular complex is stabilized, counterbalanced, or powered by its contralateral complement. An example is in a javelin throw or a baseball pitch, where the player powers up through the left leg and hip to impart extra speed to an object thrown from the right hand (Fig. 8.3). 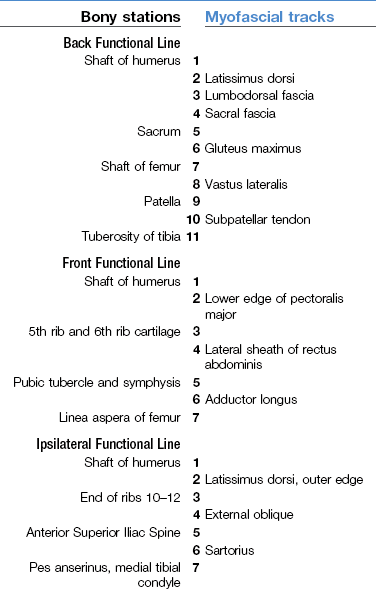 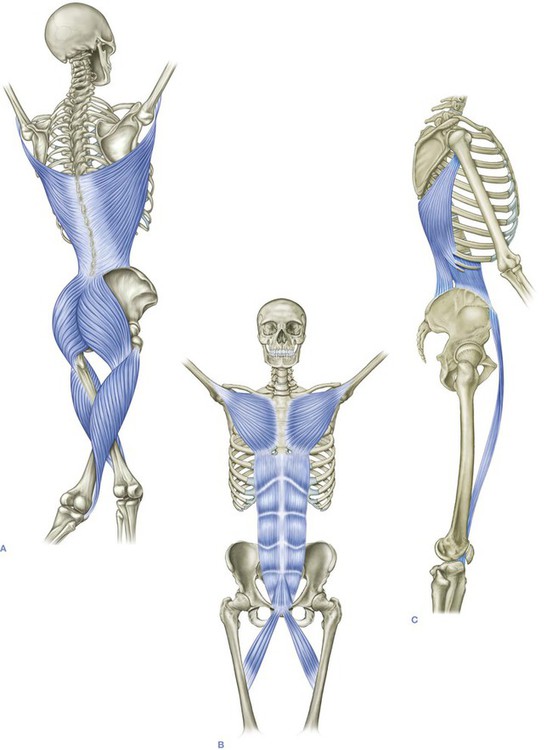 Fig. 8.1 The Back, Front, and Ipsilateral Functional Lines. 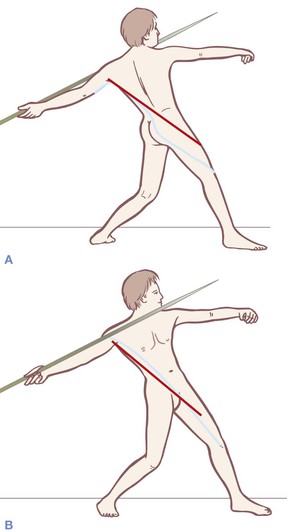 Fig. 8.3 The Functional Lines add the impetus of the trunk momentum and musculature to the strength of the limbs, stabilized by the contralateral girdle. In this instance, as the arm is drawn back to throw the javelin, the right Back Functional Line is contracted, while the right Front Functional Line is stretched and readied for contraction. The left FFL is lightly shortened, and the left BFL lightly stretched during this maneuver. When the javelin is thrown, all these conditions reverse – the right FFL contracts, the right BFL is stretched, and their left-side complements exchange stabilizing roles.

As mentioned, these lines are less involved in standing posture than others under discussion in this book. For the most part, they involve superficial tissues that are so much in use during day-to-day activities that their opportunity to stiffen or fascially shorten to maintain posture is minimal. If they do distort posture as a whole, their action is to bring one shoulder closer to its opposite hip, either across the front or across the back. Although that pattern is common – especially closing across the front – the source for it usually resides in the Spiral Line or in deeper layers described in Ch. 9. Once these other myofascial structures have been balanced, these Functional Lines often fall into place without presenting significant further problems of their own.

These lines do, however, have strong postural stabilizing functions in positions outside the resting standing posture. In many yoga poses, or postures that require stabilizing the upper girdle to the trunk (as, for example, when working above the head), these lines transmit the strain downward or provide the stability upward to fix the base of support for the upper limb. Less frequently, they can be used to provide stability or counterbalance for the work of the lower limb in a similar way, as in a football kick.

There is but one common postural compensation pattern associated with the Functional Lines and that is a preference rotation usually associated with handedness or a specific activity such as a sport, where one shoulder draws closer to the opposite hip repetitively. This can affect the tonus and coordination of all six Functional Lines, but the Spiral, Lateral, or Deep Front Lines are usually the more salient limiters to the pattern.

These lines enable us to give extra power and precision to the movements of the limbs by lengthening their lever arm through linking them across the body to the opposite limb in the other girdle. Thus the weight of the arms can be employed in giving additional momentum to a kick, and the movement of the pelvis contributes to a tennis backhand. While many applications to sport spring to mind when considering these lines, the mundane but essential example is the contralateral counterbalance between shoulder and hip in every walking step.

The Functional Lines appear as spirals on the body, and always work in helical patterns. They could be considered as appendicular supplements to the Spiral Line, or, as stated above, the trunk extensions of the Arm Lines. In real-time activity, the lines of pull change constantly, and the precision of the lines detailed below is a summary of a central moment in the sweep of forces.

The Functional Lines in detail

The Back Functional Line

The Back Functional Line (BFL) begins (for analytic purposes; in practice it connects in with the Superficial Front or Deep Back Arm Lines, depending on the particular action) with the distal attachment of the latissimus dorsi (see Fig. 8.1A). It runs down a little lower than the approximate center of that muscle’s spread, joining into the superficial laminae of the sacrolumbar fascia.

The BFL crosses the midline approximately at the level of the sacrolumbar junction, passing through the sacral fascia to connect with the lower (sacral and sacrotuberal) fibers of the gluteus maximus on the opposite side.

The lower fibers of gluteus maximus pass under the posterior edge of the iliotibial tract (ITT), and thus under the Lateral Line, to attach to the posterolateral edge of the femur, about one-third of the way down the femoral shaft. If we continue on in the same direction, we find fascial fibers linking the gluteus and the vastus lateralis muscle, which in turn link us down through the quadriceps tendon to the patella, which is connected, via the subpatellar tendon, to the tibial tuberosity. We choose to end the line analysis here, though, having reached the tibial tuberosity, we could continue this line down to the medial arch by means of the tibialis anterior and the anterior crural fascia (as discussed in Ch. 4 on the SFL).

The Front Functional Line (FFL) begins at about the same place as its complement, with the distal attachment of the pectoralis major on the humerus passing along the lowest fibers of that muscle to their origin on the 5th and 6th ribs (Fig. 8.1B). Since the clavipectoral fascia containing the pectoralis minor also connects to the 5th rib, the FFL could be said to be an extension of both the Superficial and Deep Front Arm Lines.

These pectoral fibers form a fascial continuity with the abdominal aponeurosis that links the external oblique and rectus abdominis muscles, and the line passes essentially along the outer edge of the rectus or inner edge of the oblique fascia to the pubis, a strip of fascia known as the semilunar line. Passing through the pubic bone and fibrocartilage of the pubic symphysis, we emerge on the other side with the substantial tendon of the adductor longus, which passes down, out, and back to attach to the linea aspera on the posterior side of the femur.

From the linea aspera we can imagine a link to the short head of the biceps, and thus to the lateral crural compartment and the peroneals/fibularii (Spiral Line, Ch. 6, p. 141). This, however, would involve passing through the intervening sheet of the adductor magnus, which is not allowed by the Anatomy Trains rules. We will therefore end the FFL at the end of the adductor longus on the linea aspera (see Fig. 2.5).