Overview of the Major Pathogens & Introduction to Anaerobic Bacteria

Overview of the Major Pathogens & Introduction to Anaerobic Bacteria

Overview of the Major Pathogens

OVERVIEW OF THE MAJOR PATHOGENS

The major bacterial pathogens are presented in Table 14–1 and described in Chapters 15 through 26. So that the reader may concentrate on the important pathogens, the bacteria that are less medically important are described in a separate chapter (see Chapter 27).

(1) Organisms associated with the enteric tract

(2) Organisms associated with the respiratory tract

As is true of any classification dealing with biologic entities, this one is not entirely precise. For example, Campylobacter causes enteric tract disease but frequently has an animal source. Nevertheless, despite some uncertainties, subdivision of the large number of gram-negative rods into these functional categories should be helpful to the reader.

Table 14–2 presents the 10 most common “notifiable” bacterial diseases in the United States for 2009 as compiled by the Centers for Disease Control and Prevention. Note that only notifiable diseases are included and that certain common conditions such as streptococcal pharyngitis and impetigo are not included. Two sexually transmitted diseases, chlamydial infection and gonorrhea, are by far the most common diseases listed, followed by salmonellosis, syphilis, and Lyme disease in the top five. 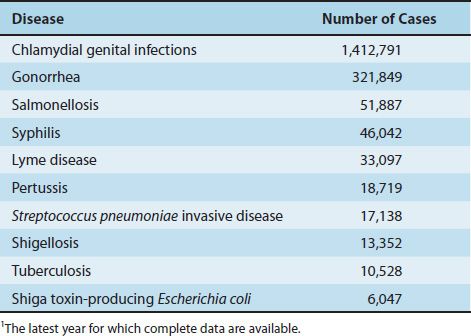 Tags: Review of Medical Microbiology and Immunology 13e
Jan 26, 2017 | Posted by admin in MICROBIOLOGY | Comments Off on Overview of the Major Pathogens & Introduction to Anaerobic Bacteria
Premium Wordpress Themes by UFO Themes
WordPress theme by UFO themes
%d bloggers like this: