The medically important stages in the life cycle of certain minor protozoa are described in Table 53–1.

Acanthamoeba castellanii and Naegleria fowleri are free-living amebas that cause meningoencephalitis. The organisms are found in warm freshwater lakes and in soil. Their life cycle involves trophozoite and cyst stages. Cysts are quite resistant and are not killed by chlorination.

Naegleria trophozoites usually enter the body through mucous membranes while an individual is swimming. They can penetrate the nasal mucosa and cribriform plate to produce a purulent meningitis and encephalitis that are usually rapidly fatal (Figure 53–1). Acanthamoeba is carried into the skin or eyes during trauma. Acanthamoeba infections occur primarily in immunocompromised individuals, whereas Naegleria infections occur in otherwise healthy persons, usually children. In the United States, these rare infections occur mainly in the southern states and California. 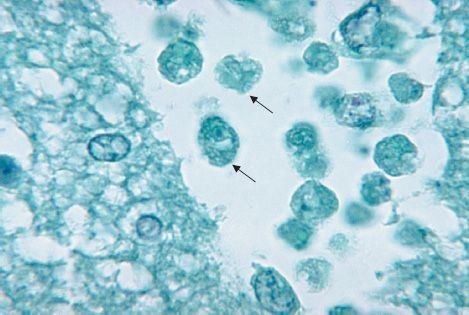 Acanthamoeba also causes keratitis—an inflammation of the cornea that occurs primarily in those who wear contact lenses. With increasing use of contact lenses, keratitis has become the most common disease associated with Acanthamoeba infection. The amebas have been recovered from contact lenses, lens cases, and lens disinfectant solutions. Tap water contaminated with amebas is the source of infection for lens users.

Babesia microti causes babesiosis—a zoonosis acquired chiefly in the coastal areas and islands off the northeastern coast of the United States (e.g., Nantucket Island). The sporozoan organism is endemic in rodents and is transmitted by the bite of the tick Ixodes dammini (renamed I. scapularis), the same species of tick that transmits Borrelia burgdorferi, the agent of Lyme disease. Babesia infects red blood cells, causing them to lyse, but unlike plasmodia, it has no exoerythrocytic phase. Asplenic patients are affected more severely.

The influenzalike symptoms begin gradually and may last for several weeks. Hepatosplenomegaly and anemia occur. Diagnosis is made by seeing intraerythrocytic ring-shaped parasites on Giemsa-stained blood smears. The intraerythrocytic ring-shaped trophozoites are often in tetrads in the form of a Maltese cross (Figure 53–2). Unlike the case with plasmodia, there is no pigment in the erythrocytes. The treatment of choice for mild to moderate disease is a combination of atovaquone and azithromycin. Patients with severe disease should receive a combination of quinidine and clindamycin. Exchange transfusion should also be considered in patients with severe disease. Prevention involves protection from tick bites and, if a person is bitten, prompt removal of the tick. 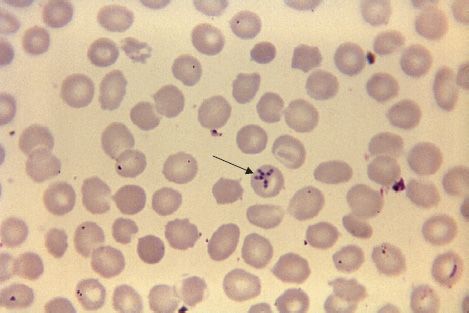