The ability of viruses to cause disease can be viewed on two distinct levels: (1) the changes that occur within individual cells and (2) the process that takes place in the infected patient.

There are four main effects of virus infection on the cell: (1) death, (2) fusion of cells to form multinucleated cells, (3) malignant transformation, and (4) no apparent morphologic or functional change.

Death of the cell is probably due to inhibition of macromolecular synthesis. Inhibition of host cell protein synthesis frequently occurs first and is probably the most important effect. Inhibition of DNA and RNA synthesis may be a secondary effect. It is important to note that synthesis of cellular proteins is inhibited but viral protein synthesis still occurs. For example, poliovirus inactivates an initiation factor (IF) required for cellular mRNA to be translated into cellular proteins, but poliovirus mRNA has a special ribosome-initiating site that allows it to bypass the IF so that viral proteins can be synthesized.

Infected cells frequently contain inclusion bodies, which are discrete areas containing viral proteins or viral particles. They have a characteristic intranuclear or intracytoplasmic location and appearance depending on the virus. One of the best examples of inclusion bodies that can assist in clinical diagnosis is that of Negri bodies, which are eosinophilic cytoplasmic inclusions found in rabies virus–infected brain neurons. Another important example is the owl’s eye inclusion seen in the nucleus of cytomegalovirus-infected cells. Electron micrographs of inclusion bodies can also aid in the diagnosis when virus particles of typical morphology are visualized.

Fusion of virus-infected cells produces multinucleated giant cells, which characteristically form after infection with herpesviruses and paramyxoviruses. Fusion occurs as a result of cell membrane changes, which are probably caused by the insertion of viral proteins into the membrane. The clinical diagnosis of herpesvirus skin infections is aided by the finding of multinucleated giant cells with eosinophilic intranuclear inclusions in skin scrapings.

A hallmark of viral infection of the cell is the cytopathic effect (CPE). This change in the appearance of the infected cell usually begins with a rounding and darkening of the cell and culminates in either lysis (disintegration) or giant cell formation. Detection of virus in a clinical specimen frequently is based on the appearance of CPE in cell culture. In addition, CPE is the basis for the plaque assay, an important method for quantifying the amount of virus in a sample.

Infection with certain viruses causes malignant transformation, which is characterized by unrestrained growth, prolonged survival, and morphologic changes such as focal areas of rounded, piled-up cells. These changes are described in more detail in Chapter 43.

Infection of the cell accompanied by virus production can occur without morphologic or gross functional changes. This observation highlights the wide variations in the nature of the interaction between the virus and the cell, ranging from rapid destruction of the cell to a symbiotic relationship in which the cell survives and multiplies despite the replication of the virus.

Pathogenesis in the infected patient involves (1) transmission of the virus and its entry into the host; (2) replication of the virus and damage to cells; (3) spread of the virus to other cells and organs; (4) the immune response, both as a host defense and as a contributing cause of certain diseases; and (5) persistence of the virus in some instances.

Viruses are transmitted to the individual by many different routes, and their portals of entry are varied (Table 32–1). For example, person-to-person spread occurs by transfer of respiratory secretions, saliva, blood, or semen and by fecal contamination of water or food. The transfer of blood, either by transfusion or by sharing needles during intravenous drug use, can transmit various viruses (and bacteria). The screening of donated blood for human immunodeficiency virus, human T-cell lymphotropic virus, hepatitis B virus, hepatitis C virus, and West Nile virus (as well as Treponema pallidum) has greatly reduced the risk of infection by these pathogens. 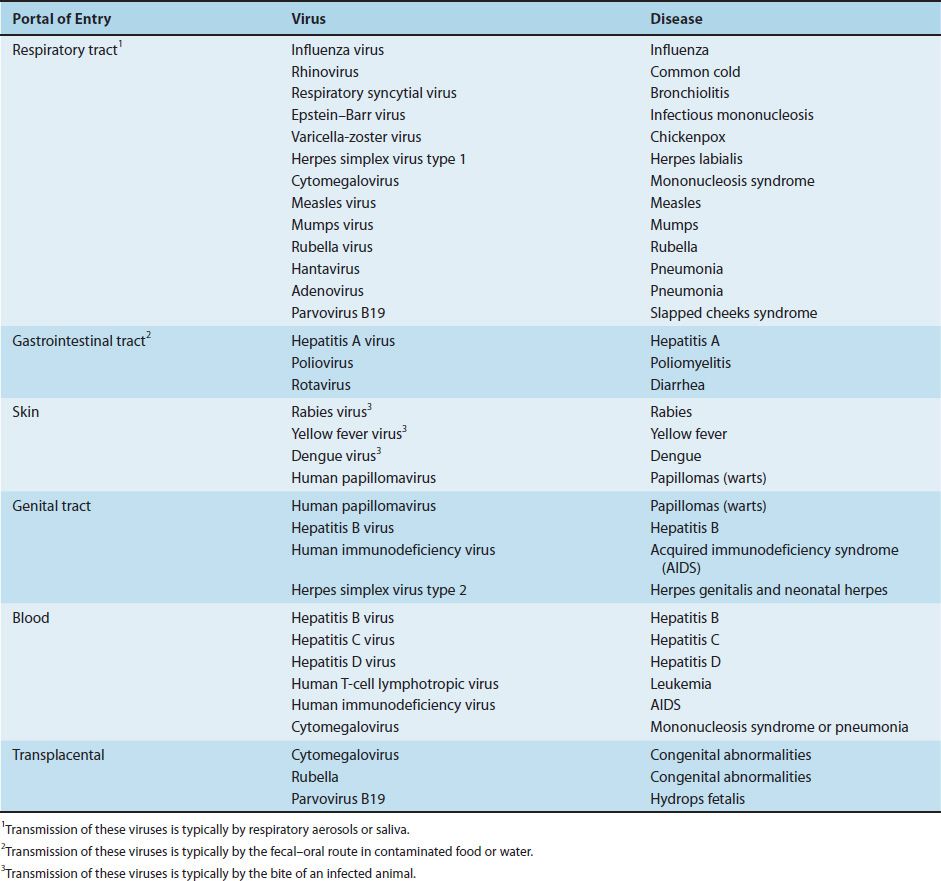 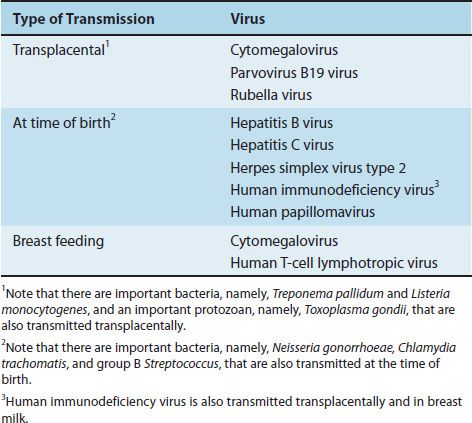 Animal-to-human transmission can take place either directly from the bite of a reservoir host as in rabies or indirectly through the bite of an insect vector, such as a mosquito, which transfers the virus from an animal reservoir to the person. The zoonotic diseases caused by viruses are described in Table 32–3. In addition, activation of a latent, nonreplicating virus to form an active, replicating virus can occur within the individual, with no transmission from an external source.

TABLE 32–3 Medically Important Viruses That Have an Animal Reservoir

Most viral infections are either localized to the portal of entry or spread systemically through the body. The best example of the localized infection is the common cold caused by rhinoviruses, which involves only the upper respiratory tract. Influenza is localized primarily to the upper and lower respiratory tracts. Respiratory viruses have a short incubation period because they replicate directly in the mucosa, but systemic infections such as poliomyelitis and measles have a long incubation period because viremia and secondary sites of replication are required.

One of the best-understood systemic viral infections is paralytic poliomyelitis (Figure 32–1). After poliovirus is ingested, it infects and multiplies within the cells of the small intestine and then spreads to the mesenteric lymph nodes, where it multiplies again. It then enters the bloodstream and is transmitted to certain internal organs, where it multiplies again. The virus reenters the bloodstream and is transmitted to the central nervous system, where damage to the anterior horn cells occurs, resulting in the characteristic muscle paralysis. It is during this obligatory viremia that circulating IgG antibodies induced by the polio vaccine can prevent the virus from infecting the central nervous system. Viral replication in the gastrointestinal tract results in the presence of poliovirus in the feces, thus perpetuating its transmission to others. 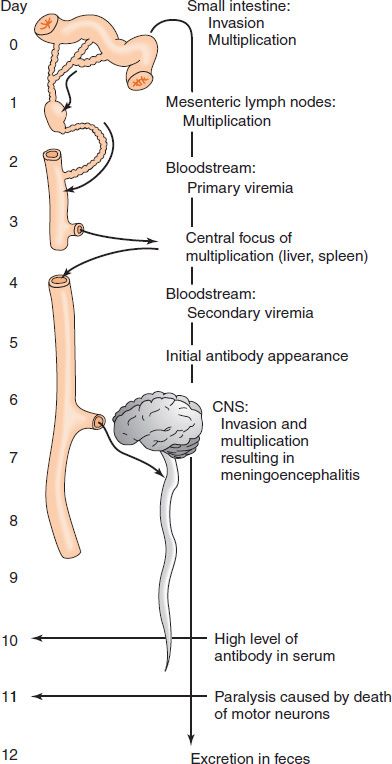 Some viral infections spread systemically, not via the bloodstream, but rather by retrograde axonal flow within neurons. Four important human pathogens do this: rabies virus, herpes simplex type 1, herpes simplex type 2, and varicella-zoster virus. As an example, rabies virus is introduced into the body at the site of an animal bite. The virus infects a local sensory neuron and ascends into the central nervous system by retrograde axonal flow, where it causes encephalitis.

Some of the molecular determinants of pathogenesis have been determined by using reovirus infection in mice as a model system. This virus has three different outer capsid proteins, each of which has a distinct function in determining the course of the infection. One of the proteins binds to specific receptors on the cell surface and thereby determines tissue tropism. A second protein conveys resistance to proteolytic enzymes in the gastrointestinal tract and acts as the antigen that stimulates the cellular immune response. The third protein inhibits cellular RNA and protein synthesis, leading to death of the cell. Alternatively, this third protein can play a role in the initiation of persistent viral infection.

The signs and symptoms of most viral diseases undoubtedly are the result of cell killing by virus-induced inhibition of macromolecular synthesis. Death of the virus-infected cells results in a loss of function and in the symptoms of disease. For example, when poliovirus kills motor neurons, paralysis of the muscles innervated by those neurons results. Also, the hemorrhages caused by Ebola virus are due to the damage to the vascular endothelial cells caused by the envelope glycoprotein of the virus.

However, there are some diseases that are not caused by the virus damaging or killing the infected cell. For example, rotavirus-induced diarrhea is caused primarily by stimulation of the enteric nervous system. It is thought that the rotavirus-infected enterocytes produce cytokines that stimulate the enteric neurons, resulting in excess fluid and electrolyte secretion into the bowel lumen.

There are other diseases in which cell killing by immunologic attack plays an important role in pathogenesis. Both cytotoxic T cells and antibodies play a role in immunopathogenesis.

(2) Cytotoxic T cells are involved in the pathogenesis of hepatitis caused by hepatitis A, B, and C viruses. These viruses do not cause a CPE, and the damage to the hepatocytes is the result of the recognition of viral antigens on the hepatocyte surface by cytotoxic T cells. The rash of measles is similarly caused by these cells attacking the infected vascular endothelium in the skin.

Strains of viruses differ greatly in their ability to cause disease. For example, there are strains of poliovirus that have mutated sufficiently such that they have lost the ability to cause polio in immunocompetent individuals (i.e., they are attenuated). These strains are used in vaccines. The viral genes that control the virulence of the virus are poorly characterized, and the process of virulence is poorly understood.

Viruses have several ways by which they evade our host defenses (Table 32–4). These processes are often called immune evasion. Some viruses encode the receptors for various mediators of immunity such as interleukin-1 (IL-1) and tumor necrosis factor (TNF). For example, vaccinia virus encodes a protein that binds to IL-1, and fibroma virus encodes a protein that binds to TNF. When released from virus-infected cells, these proteins bind to the immune mediators and block their ability to interact with receptors on their intended targets, our immune cells that mediate host defenses against the viral infection. By reducing our host defenses, the virulence of the virus is enhanced. These virus-encoded proteins that block host immune mediators are often called cytokine decoys.

Tags: Review of Medical Microbiology and Immunology 13e
Jan 26, 2017 | Posted by admin in MICROBIOLOGY | Comments Off on Pathogenesis
Premium Wordpress Themes by UFO Themes
WordPress theme by UFO themes
%d bloggers like this: