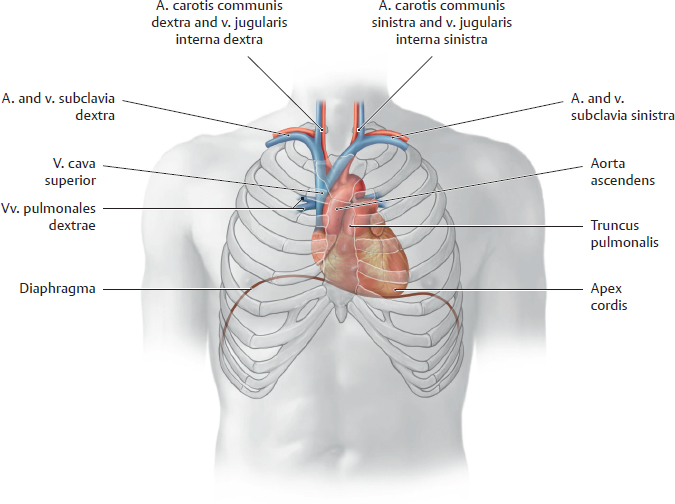 A Projection of the cor and vessels onto the chest wall

Anterior view. The two great arterial vessels in the thorax are the aorta and the truncus pulmonalis. Because the aa. pulmonales run a very short distance before entering the pulmones, they are discussed under the heading of the pulmonary vessels (see p. 142 and 143).

The aorta ascendens is “in the shadow” of the sternum on the PA chest radiograph, while the arcus aortae (“aortic knob”) forms the superior left portion of the left heart border. The aorta descendens is hidden by the cor itself. 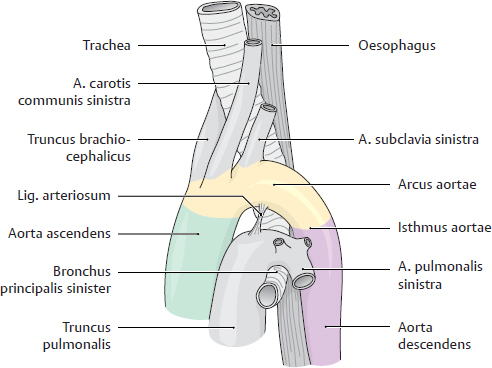 • Aorta ascendens: arises from the ventriculus sinister, is dilated near the cor to form the bulbus aortae (not visible here).

• Arcus aortae: the arched portion of the aorta between the partes ascendens and descendens, runs posteriorly and to the left. A constriction may persist as an embryonic remnant in this part of the aorta (the isthmus aortae, see p. 190).

C Functional groups of arteries that supply the thoracic organs

These are mainly vessels that supply the organs and internal structures of the thorax. The intrathoracic branches of the aorta can be divided into four main functional groups:

Arteries to the head and neck or to the upper limb:

• A. thyroidea ima (present in only 10% of the population)

Indirect paired branches (not arising directly from the aorta) that are distributed primarily to the head and neck but give off branches, usually small, that enter the chest and supply intrathoracic organs:

Indirect paired branches which supply the chest wall (mostly anterior, some inferior), usually in the form of parietal branches, and may give off other branches to intrathoracic organs (visceral sub-branches):

– A. pericardiacophrenica (with branches to the pericardium and diaphragma)

– A. musculophrenica (with a branch to the diaphragma) 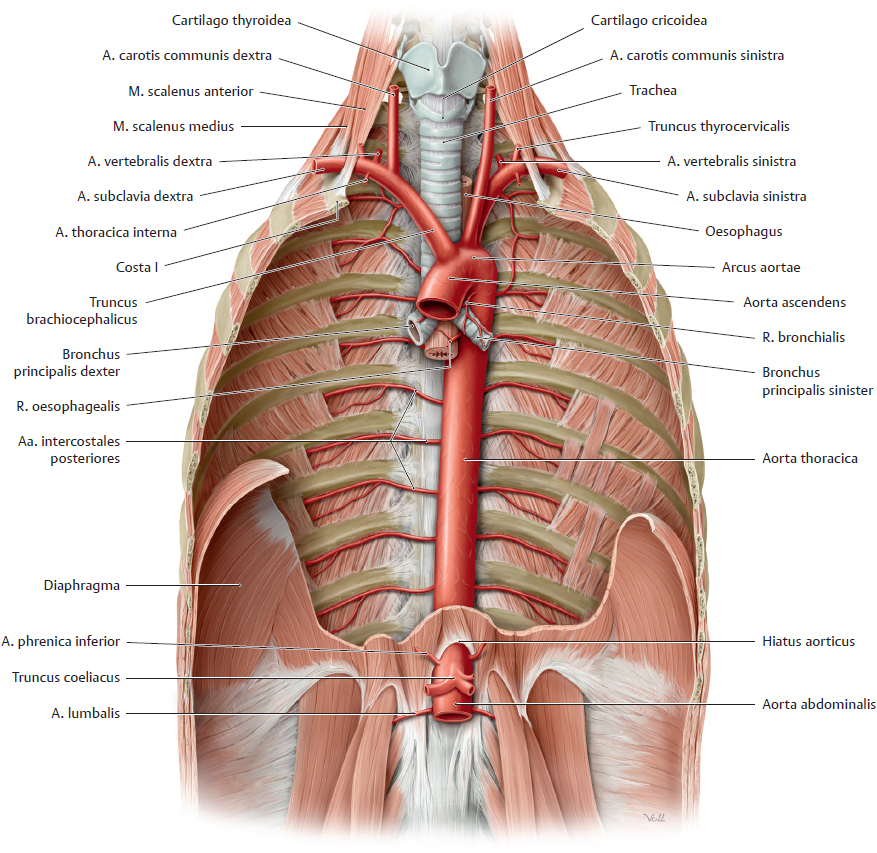 D Position of the aorta in the thorax

Anterior view. The pleura, internal fasciae, and most thoracic organs have been removed, and the diaphragma has been windowed to display more of the cavitas thoracis. The branches of the aorta (see C and p. 203) supply blood to all the organs, delivering almost 5 liters of blood per minute throughout the body. The aorta thoracica is thick-walled, particularly in its pars ascendens and arcus aortae, but these walls are also elastic. During the systolic wave of pressure as the ventriculus sinister contracts, these segments of the aorta dilate rapidly and then recoil. This serves to absorb and dissipate the pressure wave to produce a steadier, more even flow of blood in the arteries farther away from the cor. Because the arcus aortae runs posteriorly and to the left, the relationship of the aorta to the trachea and oesophagus changes as the vessel passes inferiorly through the chest (see also B and p. 162). The most anterior part of the aorta is the aorta ascendens. The arcus aortae then passes to the left side of the trachea, arching over the bronchus principalis sinister. It passes initially to the left of the oesophagus but then descends posterior to the oesophagus and anterior to the columna vertebralis. Because of this relationship, an abnormal outpouching of the aortic wall (aneurysm) may narrow the oesophagus and cause swallowing difficulties (dysphagia). The pars thoracica aortae pierces the diaphragma at the hiatus aorticus (junction of the T11/T12 vertebrae), becoming the aorta abdominalis.

Note: In rare cases the arcus aortae is constricted behind the lig. arteriosum (see B). This constriction is normal in the embryonic circulation, but its persistence after birth may produce the clinical manifestations of a coarctation of the aorta. This includes hypertension in the head, neck, and upper limbs, insufficient blood flow in the lower extremities, and left ventricular hypertrophy (due to chronic excessive workload and pressure) (see p.190 f). 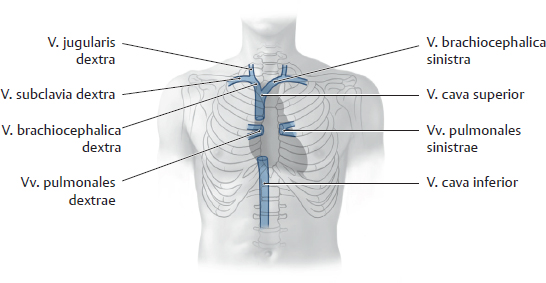 A Projection of the venae cavae onto the skeleton

Anterior view. The v. cava superior lies to the right of the midline and appears at the right sternal border on radiographs. Formed by the confluence of the two vv. brachiocephalicae, the v. cava superior enters the atrium dextrum of the cor from above, forming its border in the PA chest radiograph (see p. 102). The v. cava inferior runs a very short distance within the thorax (approximately 1 cm, not shown here). Immediately after piercing the diaphragma (at the foramen venae cavae), it passes through the pericardium and ends by opening into the atrium dextrum of the cor from below. It has no tributaries within the chest (the vv. pulmonales are described on p. 142). 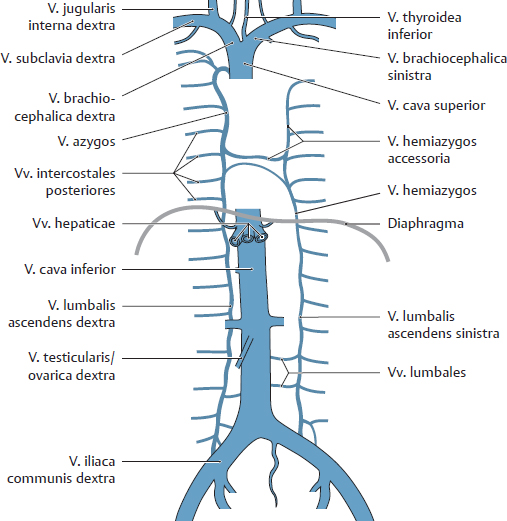 B The azygos system

Note: The v. azygos empties into the v. cava superior, while the vv. lumbales ascendentes on both sides open into the v. cava inferior via the vv. lumbales and the vv. iliacae communes. In this way the azygos system creates a shunt between the vv. cavae superior and inferior, called the “cavocaval anastomosis.” If drainage from the v. cava inferior is obstructed, venous blood can still reach the v. cava superior and enter the right cor by passing through the azygos system (see D and p. 210).

C Functional groups of veins that drain the thoracic organs

These are mainly vessels that drain the organs and internal structures of the thorax. All of them drain ultimately to the v. cava superior, whose tributaries in the chest can be divided into four main functional groups:

Veins that drain the head and neck or the upper limb:

• Left and right vv. brachiocephalicae with

• Visceral branches that drain the trachea, bronchi, and oesophagus:

• Parietal branches that drain the inner chest wall and diaphragma:

Indirect paired tributaries of the v. cava superior that descend from the head and neck but receive smaller veins that drain thoracic organs:

– Vv. pericardiacophrenicae (with tributaries from the pericardium and diaphragma)

– Vv. musculophrenicae (with a tributary from the diaphragma)

Note: Structures of the mediastinum superius may also drain directly to the vv. brachiocephalicae (e.g., via the vv. tracheales, vv. oesophageales, and vv. mediastinales).