Age distribution for 302 patients with neurothekeoma (compiled from [9, 14]) 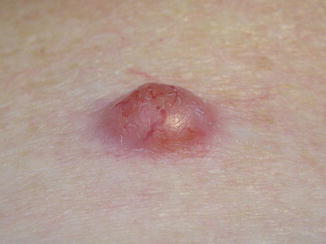 No reported case of neurothekeoma has metastasized, and there is only a small risk of recurrence or regrowth associated with incomplete excision (15 % at most) [9, 14]. Therefore, complete excision is the cornerstone of therapy. Location in the head and neck is also correlated with higher recurrence risk, likely reflecting more conservative excisions. There are no established histopathologic features that predict recurrence (see below) [9, 14].

Neurothekeoma is a tumor of uncertain origin and unclear differentiation. Based on light microscopy, immunohistochemistry, and ultrastructural examination, various lines of differentiation have been proposed, including (myo)fibroblastic (fibro)histiocytic, and neuroectodermal [9, 20–23]. Microarray data comparing DNSM with neurothekeoma revealed that not only do the two tumors demonstrate divergent expression profiles, but DNSM clustered with schwannoma, while neurothekeoma clustered with cellular fibrous histiocytoma [24]. However, this study utilized a limited number and range of cases, so further investigation is necessary.

Microscopic examination discloses a multinodular, variably circumscribed mass in the dermis and/or subcutis (Fig. 12.3a). The epidermis is not directly involved by tumor but may be atrophic, and a Grenz zone is often seen (Fig. 12.3b) [14, 15, 25]. The mass is composed of whorled nests and bundles of cells (Fig. 12.3c). The whorled, concentric arrangements of cells have been deemed neuroid characteristics and likened to endoneurial–like structures [15]. The constituent cells range from epithelioid to spindled, with abundant, faintly eosinophilic cytoplasm and indistinct cell borders (Fig. 12.3d). Fetsch et al. [9] noted a somewhat granular quality to the cytoplasm. Nuclei are usually ovoid with fine chromatin and indistinct nucleoli. Dense collagen bands often separate the cellular nests and bundles (Fig. 12.3e). For cases exhibiting florid stromal sclerosis, the term “desmoplastic cellular neurothekeoma” has been endorsed by some authors [18, 25, 26]. Myxoid matrix is variably present in neurothekeoma (Fig. 12.3f), accounting for much of its morphologic variability, which is delineated in Table 12.1. Osteoclast-like giant cells are present in 15–39 % of cases, and rarely, Touton giant cells are seen [9, 14]. Mitotic activity varies from none to 41 per 10 high-power fields, with an average of 2–3 per 10 high-power fields [9, 14]. 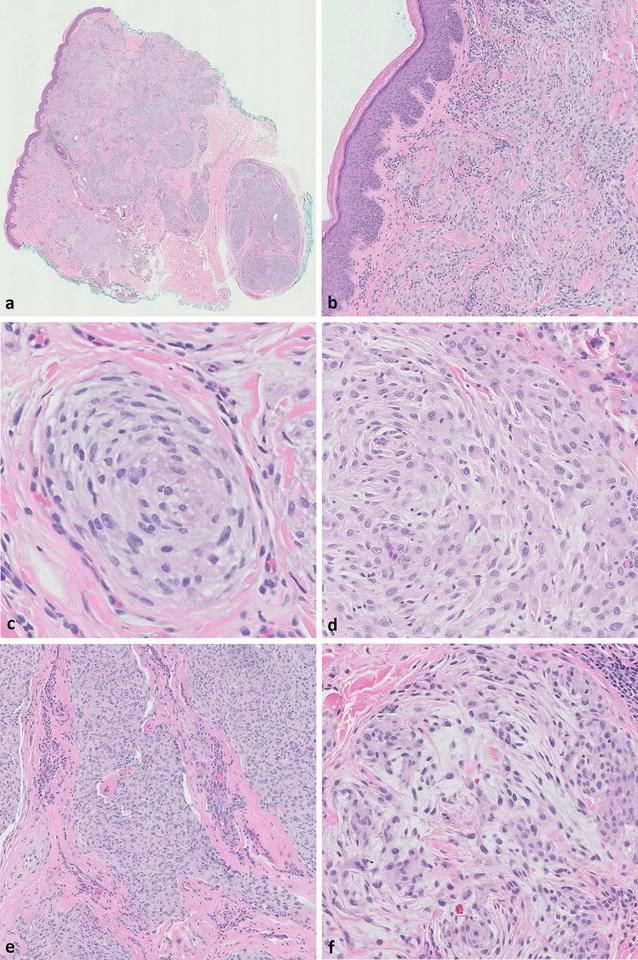 The immunophenotype of neurothekeoma is nonspecific but fairly consistent (Fig. 12.4) and thus can be supportive of the microscopic impression. S100 protein and GFAP are almost always negative [9, 10, 14], with few reports of focal S100 positivity [16], supporting the argument that it is distinct from DNSM and is not a nerve sheath tumor. Care must be taken to distinguish lesional from non-lesional cells, as S100-positive dendritic cells may be peppered throughout the tumor (Fig. 12.5) [9]. Other markers that are consistently negative in neurothekeoma include Melan-A, tyrosinase, neurofilament, CD34, desmin, and cytokeratins. gp100 (HMB-45) is usually negative, but rare cases demonstrate minimal expression [9].

Immunophenotype of neurothekeoma, compiled from the two largest series to date [9, 14]. *Based on only 10 cases. **Focally or diffusely positive. †A single case demonstrated focal desmin positivity. ‡Mostly diffuse positivity

(a) The lesional cells are negative for S100, but scattered S100-positive dendritic cells are noted (×20). (b) Strong CD10 expression, although not specific, is consistently seen (×10)
Notwithstanding the consistent S100 negativity in lesional cells, the frequent expression of MITF, NK1/C3, PGP9.5, and NSE has led several authors to propose a neuroectodermal origin for neurothekeoma [19, 23, 27, 31, 32]. However, this suggestion has been heavily criticized on the basis of the restricted specificities and sensitivities of these markers. For example, MITF expression was observed in over 80 % of neurothekeomas in two large series [9, 14], but a smaller subsequent study reported focal or no expression in most of their cases [33]. MITF also suffers from questionable specificity, with expression reported in many reactive and neoplastic cells of non-neuroectodermal origin [34–36]. Similarly, NK1/C3 expression has been reported in a wide array of neoplasms of many lineages aside from melanocytic, including (fibro)histiocytic tumors [37]. PGP9.5 was originally reported as a marker for neurothekeoma based on a study of 12 cases [32], but its promiscuity was later exposed in a report of strong expression in the vast majority of non-neuroectodermal and neuroectodermal neoplasms [38]. Two studies endorse S100A63 as a more sensitive alternative to PGP9.5 but report a similar poor specificity [16, 31]. Finally, SOX-10, a marker of neuroectodermal differentiation, has been reported as negative in all of 25 neurothekeomas in one series [33]. Therefore, the notion of a neuroectodermal origin for neurothekeoma seems tenuous at best.

As mentioned previously, microarray analysis revealed disparate expression profiles for neurothekeoma and DNSM, with the former resembling cellular fibrous histiocytoma and the latter resembling dermal schwannoma [24]. No recurring chromosomal abnormalities have been described for neurothekeoma.

The most common alternative diagnoses rendered by pathologists for neurothekeoma cases include melanocytic lesions, neural tumors, fibrohistiocytic proliferations, and DNSM (Fig. 12.6) [9, 14], each of which can present as an amelanotic dermal proliferation of epithelioid or spindled cells [15]. The salient discriminatory features for neurothekeoma versus non-melanocytic lesions are reviewed in Table 12.2. Of special note is that neurothekeoma and plexiform fibrohistiocytic tumor are best distinguished on morphologic grounds, as no immunohistochemical marker can distinguish the two with certainty [14, 16, 39]. The distinction is important, as plexiform fibrohistiocytic tumor has some metastatic potential [6]. Other non-melanocytic lesions entering into the differential for neurothekeoma include reticulohistiocytoma and variants of fibrous histiocytoma [9]. Architectural features, such as a lack of whorled growth in reticulohistocytoma or the presence of storiform growth in fibrous histiocytoma, can lead to the correct diagnosis without a need for ancillary studies. Another diagnosis that may be considered is a pilar leiomyoma [40] in cases expressing smooth-muscle actin (SMA). Although neurothekeomas contain spindle cells with eosinophilic cytoplasm, they lack the characteristic cigar-shaped or corkscrew nuclei of smooth-muscle tumors. Desmin expression can exclude neurothekeoma. Likewise, S100 positivity can exclude neurothekeoma, which resolves the neuronal and Schwannian differentials.

Frequencies of alternative diagnoses for cases of neurothekeoma offered by contributing pathologists in the largest series to date [9]. A malignant diagnosis was considered in 21 % of cases. Diagnoses within the “Other” category include granulomatous processes, skin adnexal tumors, smooth-muscle tumors, granular cell tumors, and various sarcomas
Table 12.2

The non-melanocytic differential diagnosis of neurothekeoma [6, 9, 10, 14]

In the largest neurothekeoma series to date [9], Spitz nevus was the most commonly considered melanocytic entity in the differential. Neurothekeoma—namely, the cellular pattern—overlaps significantly with amelanotic, intradermal Spitz nevi, both clinically and morphologically. Both affect predominantly young patients (Fig. 12.7) with a female preponderance. The amelanotic Spitz nevus also exhibits a proclivity for the head and neck, where it typically presents as a dome-shaped, red-to-pink papule or nodule [48]. Intradermal Spitz accounts for up to 20 % of Spitz lesions [49]. Histologically, the epidermal changes associated with Spitz nevi tend to be hyperplastic [50–52], which is not a usual feature of neurothekeoma [9, 14, 15]. The overall multinodular shape of neurothekeoma contrasts with the classic wedge shape of Spitz nevi [50]. Although both lesions contain spindled to epithelioid cells in a collagenous stroma, only Spitz nevi show maturation. Additionally, the cellular whorling that is characteristic of neurothekeoma is not a feature of Spitz nevi [15]. Myxoid matrix, if present, steers toward the interpretation of neurothekeoma, as it is very rare in Spitz nevi [53, 54]. Although both lesions can have giant cells, those of neurothekeoma are described as osteoclastic, which are not described in Spitz nevi [49, 51, 52]. The lesions are compared in Table 12.3 and Fig. 12.8.