Compound Spitz nevus: (a and b) note the regular elongation of rete ridges and the wedge-shape of the lesion in the dermis. (c) Large epithelioid cells in the epidermis. Note the similarity shape and chromatin among the cells

In the dermis, the cells are arranged in fascicles and have a large ample eosinophilic cytoplasm with eosinophilic nucleoli. Some of the epithelioid cells can show bizarre shapes but the degree of cytologic atypia is mostly uniform throughout the entire lesion. Commonly there is maturation with descent in the dermis and cells infiltrate among collagen bundles. The upper dermis may show edema and superficial telangiectases. There are features that appear to be different in Spitz nevi depending on the patient’s age. There may be mitotic figures in the superficial dermal portion of the nevus, especially in younger patients. Pagetoid growth and/or melanin deposits in the keratin layer are more common in little children. Ulceration is statistically more frequent in peripuberty patients than in adults. In adults, isolated cells within the lateral edges of the lesion are more common in Spitz nevus than in spitzoid melanoma [3].
Pigmented spindle cell nevus of Reed is considered by most authors to be a pigmented variant of Spitz nevus, more common in young women, in the extremities (particularly on the thigh). The desmoplastic variant presents as a brown papule on the extremities of young adults. It is wedge-shaped, with pleomorphic spindle and epithelioid cells with abundant eosinophilic cytoplasm arranged among thick collagen fibers [4].
The differential diagnosis includes other cutaneous epithelioid and spindle cell lesions. Epithelioid fibrous histiocytoma [5] presents as a raised, nonpigmented or light brown papule on the extremities of adults. Histologically it is a dermal lesion, composed of clusters of epithelioid, bland-looking cells, with abundant eosinophilic cytoplasm and scattered mitotic figures. Precisely due to the last feature, epithelioid fibrous histiocytoma may be confused with either Spitz nevus or spitzoid melanoma. In contrast with either one, epithelioid fibrous histiocytoma does not express melanocytic markers such as MART1, gp100, or MiTF. The lesional cells are typically positive for FXIIIa, CD68, and CD163. Anti-S100 may be a pitfall since it labels dendritic cells and thus it may be incorrectly interpreted as positive in the lesional cells.
Junctional Spitz nevi may resemble dysplastic nevi; furthermore, some authors have suggested the term “Spark” nevus for lesions that have features common to “Clark” (dysplastic) and “Spitz” nevi [6]. In general, dysplastic nevi occur in patients at any age, are symmetrical, and show irregular elongation of rete ridges with “bridging”. Dermis is irregularly fibrous, with lamellar fibrosis, vascular proliferation, and a lymphocytic infiltrate containing melanophages [7]. In general, for such cases with mixed features between Spitz and dysplastic, the differential diagnosis may not be so important, since in both cases a complete excision is probably the recommended management (see also Chap. 9).
Spitzoid melanoma is the preferred term for those malignant melanocytic lesions showing large, epithelioid melanocytes with prominent nucleoli, and predominantly arranged in clusters and nests in the dermis. Those lesions have at least some of the features of standard melanomas: irregular junctional component (variably sized nests), dermal mitotic figures (located in the lower half of the lesion), possibly of atypical shapes, pagetoid upward migration prominent or else at the periphery of the lesion, expansile pattern of growth in the dermis, pushing border in the deep dermis.
Immunohistochemistry may be helpful in the diagnosis of spitz lesions. As it is the case in most nevi, there is a pattern of maturation in Spitz nevi, i.e., with change in expression of several immunohistochemical markers from the top to the bottom of the lesion, particularly HMB-45 antigen (gp100) and Ki67. A pattern in which HMB-45 antigen and Ki67 are expressed in the intraepithelial and periepithelial components, but are almost completely absent from the deep areas of the lesion, is more consistent with a Spitz nevus than with a spitzoid melanoma (Fig. 6.2). As mentioned in Chap. 4, rather than performing an actual count of the number of melanocytes expressing this marker, we prefer comparing the patterns of expression at the top and the bottom of the lesion. Regardless of the absolute number of positive cells, nevi should have many fewer labeled cells at the base of the lesion than in the superficial areas (intraepithelial and periepithelial). It is important to remember that nevi from pregnant women may show dermal mitotic figures and slightly increased numbers of dermal cells positive for Ki67 [8]. 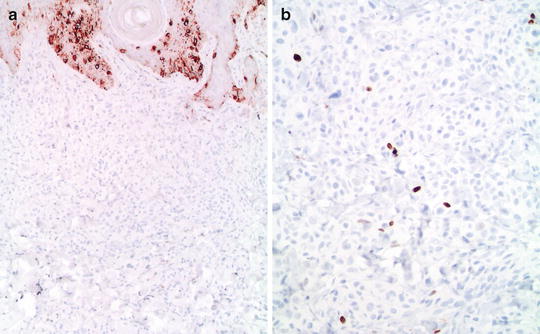 Compound Spitz nevus: (a) HMB45 shows decreased expression with depth. (b) A double immunostudy shows very low proliferation (HMB45/anti-MART1 and anti-Ki67; light hematoxylin as the counterstain)
Only gold members can continue reading. Log In or Register to continue