Neuroendocrine Differentiation in the Benign and Malignant Prostate

In the early 1970s, Azzopardi and Evans4 recognized the presence of argentaffin cells within normal prostatic adenocarcinoma. Immunohistochemically, usual adenocarcinoma of the prostate demonstrates scattered NE cells in 10% to 100% of cases, in part depending on the number of slides studied and the number of antibodies used (Fig. 12.1).7,12,16,17 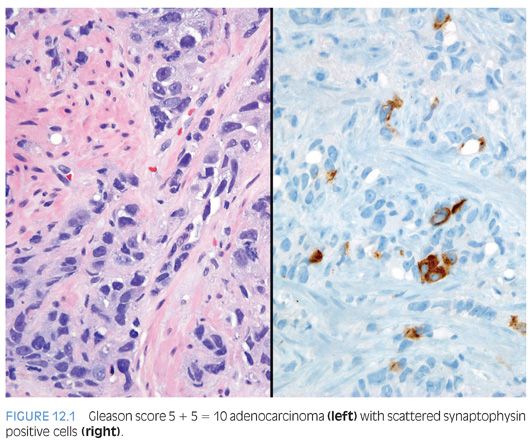 In these cases, prostate-specific antigen (PSA) is positive in the usual adenocarcinoma but variably positive in the NE cells.18 It is controversial whether NE differentiation in typical adenocarcinomas worsens prognosis. In some studies suggesting a correlation, the prognostic relationship was weak and not sufficient to be useful clinically.1,19–22 Most of the studies have shown no effect of NE differentiation on outcome, including one study each analyzing NE differentiation in prostate cancer on needle biopsy and transurethral resection of the prostate (TURP).23–34

Currently, as the clinical significance remains uncertain, it is not recommended to routinely employ immunohistochemical stains to detect any NE differentiation in an otherwise morphologically typical primary adenocarcinoma of the prostate.

The term Paneth cell-like change has been used to describe distinctive eosinophilic NE cells (eFig. 12.1).35 Paneth cell-like NE differentiation in prostatic adenocarcinoma can be seen as either patchy isolated cells or diffusely involving glands or nests.36,37 These Paneth cell-like cells may be present in well-formed glands of Gleason pattern 3 (Fig. 12.2) but also can be present in cords of cells with bland cytology, where strictly applying the Gleason grading system, one would assign a Gleason pattern 5 (Fig. 12.3, eFigs. 12.2 to 12.7). Although by the Gleason system areas of Paneth cell-like NE differentiation may be graded as pattern 5, their bland cytology, typically limited nature, and frequent association with lower grade conventional adenocarcinoma raise questions as to whether this unique histology should not be diagnosed as high grade. Of 16 radical prostatectomy specimens with Paneth cell-like NE cells lacking glandular differentiation, there was organ-confined cancer in 62.5% of cases, only 4 cases with seminal vesicle invasion, and none with pelvic lymph node metastases. The postoperative course was also favorable with an over 90% actuarial PSA progression-free risk at 5 years. The prognosis seemed to be driven by conventional parameters independent of NE differentiation. The only two patients who progressed after radical prostatectomy had Gleason score 7 conventional cancer with extraprostatic extension and seminal vesicle invasion, with one also having ductal differentiation and positive margins. In cases in which the entire tumor is composed of Paneth cell-like cells and areas of the tumor lack glandular differentiation, it is questionable whether these tumors should be assigned a Gleason score. A comment could be provided as to the generally favorable prognosis of this morphologic variant of adenocarcinoma of the prostate based on the limited data available.36 However, the data on the prognostic significance of Paneth cell-like differentiation is still limited, and we have seen anecdotal cases where such a tumor progressed to metastatic disease with small cell carcinoma. 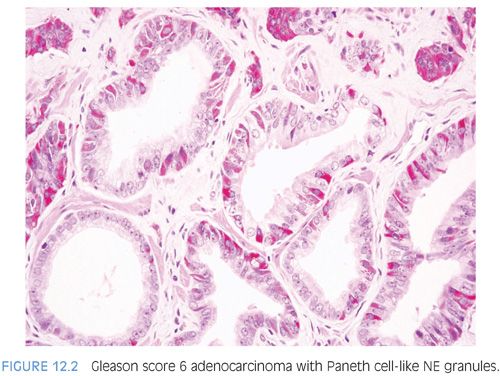 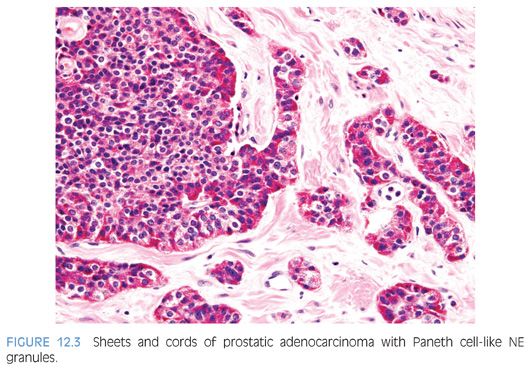 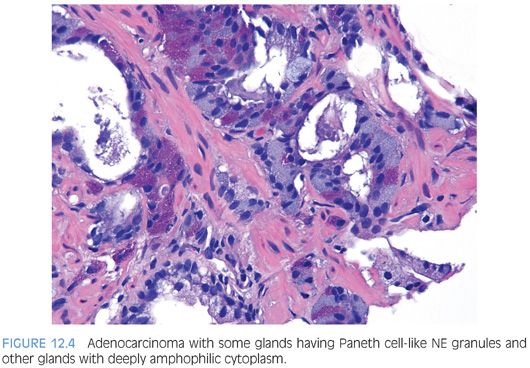 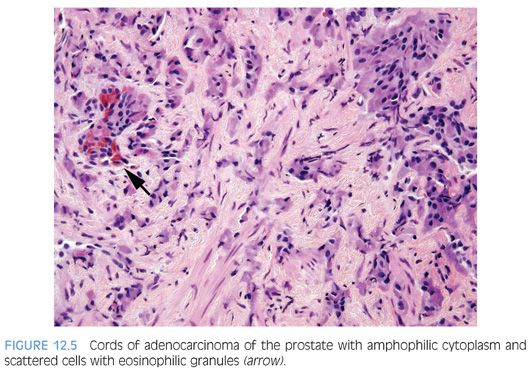 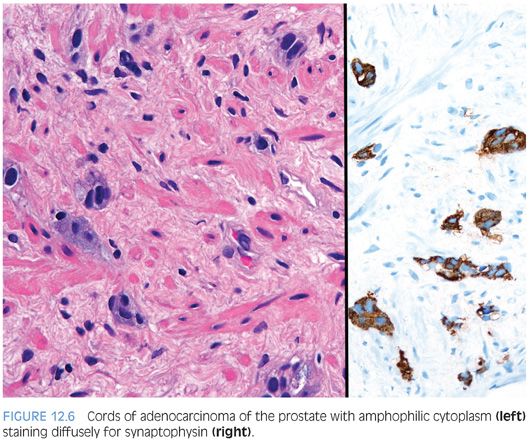 True carcinoid tumors of the prostate are extremely rare. In order to diagnose a carcinoid of the prostate and distinguish it from a prostate adenocarcinoma with carcinoid-like features, the following features should be present: (a) not closely associated with concomitant adenocarcinoma of the prostate, (b) immunohistochemically positive for NE markers and negative for PSA, and (c) originating in the prostatic parenchyma. Of the cases in the literature, there are only five cases that satisfy this definition.38–41 Some of the older reported cases of carcinoid tumor of the prostate predate the use of IHC and cannot be verified. One case based on the illustration provided is a urethral carcinoid as opposed to prostatic in origin.42 The reports by Slater43 in a 69-year-old and by Tash et al.44 in a 38-year-old male may be carcinoids, yet immunohistochemical stains for PSA or any other prostatic marker were not reported. Similarly, in the study by Wasserstein and Goldman,45 no IHC was performed. Murali et al.46 illustrate images of two prostatic carcinoids in their review article, yet no details are provided about the cases. Turbat-Herrera et al.47 reported a “prostatic carcinoid” that was negative for PSA, yet in contrast to carcinoids, only 2+ scattered synaptophysin-positive cells were present and the tumor had diffuse prominent nucleoli. The prostatic carcinoid reported by Egan et al.48 had “intraductal carcinoid” and was admixed with usual prostate adenocarcinoma and most likely represents the recently described phenomenon of “small cell-like change in high-grade prostatic intraepithelial neoplasia, intraductal carcinoma, and invasive prostatic adenocarcinoma.”49 There are five bona fide cases of prostatic carcinoids. Two cases were in men in their 30s, younger than typically seen with adenocarcinoma of the prostate.38,39 The remaining three cases were in even younger males with multiple endocrine neoplasia (MEN) IIB syndrome.40,41 Patients were 7, 19, and 22 years of age. Although the data is limited, prostatic carcinoids tend to present with locally advanced disease, including some with regional lymph node metastases yet still have a favorable prognosis. It is reasonable for these true carcinoids to grade them in an analogous fashion to those of gastrointestinal tract based on mitotic rates and Ki67 proliferation rates.

Several cases have been reported where a “carcinoid-like” or “carcinoidal” appearance of the tumor with nested architecture and uniform nuclei has been present (eFigs. 12.8 and 12.9). These tumors may on occasion also exhibit immunohistochemical and/or ultrastructural evidence of NE differentiation. Some authors consider immunohistochemical staining with PSA a key discriminator where true prostatic carcinoids are negative and carcinoid-like carcinomas are positive. Most cases reported with carcinoid-like morphology have admixed usual prostate cancer or the carcinoid-like tumor expressed PSA.50–56 Several carcinoid-like prostate cancers appear to be variants of Paneth cell-like NE differentiation with a paucity or absence of eosinophilic granules where PSA may be negative (Fig. 12.7).57 Clinically, carcinoid-like adenocarcinomas have behaved like ordinary prostate carcinomas and in none of these cases has a carcinoid syndrome been present. Prostate-specific acid phosphatase (PSAP) immunoreactivity is not discriminatory in the assessment of whether a tumor is a true carcinoid or adenocarcinoma with carcinoid-like features as even some nonprostatic carcinoid tumors express PSAP.58 Although most carcinoid-like tumors have not produced clinical symptoms, several cases have produced adrenocorticotropic hormone (ACTH) in sufficient quantity to result in Cushing syndrome.52 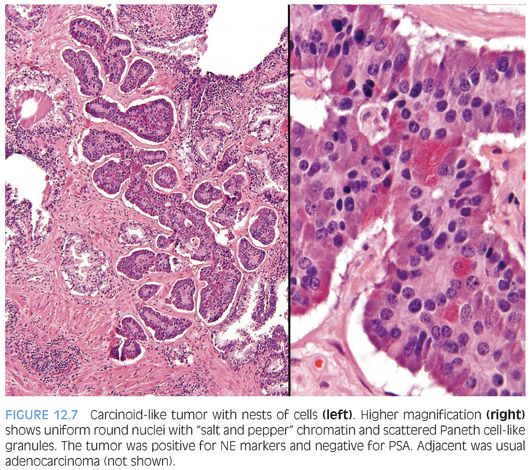 The diagnosis of carcinoid tumor should be made very rarely and strictly, applying the criteria outlined earlier in the definition. In such cases, particularly in younger patients, investigation for stigmata of MEN syndrome should be initiated. Tumors with PSA-negative nests and cords of cells, which are admixed with usual prostate adenocarcinoma, should not be diagnosed as carcinoid tumor because such cases may represent adenocarcinoma with Paneth cell-like NE differentiation or its more subtle variant with cytoplasmic amphophilia.

Small cell carcinoma is a high-grade tumor defined by characteristic nuclear features, including lack of prominent nucleoli, nuclear molding, fragility, and crush artifact. High nuclear to cytoplasmic ratio and indistinct cell borders are characteristic, as is a high mitotic rate and apoptotic bodies (Fig. 12.8, eFigs. 12.10 to 12.15). In resection specimens, as opposed to needle biopsy cores, geographic necrosis may be frequent. 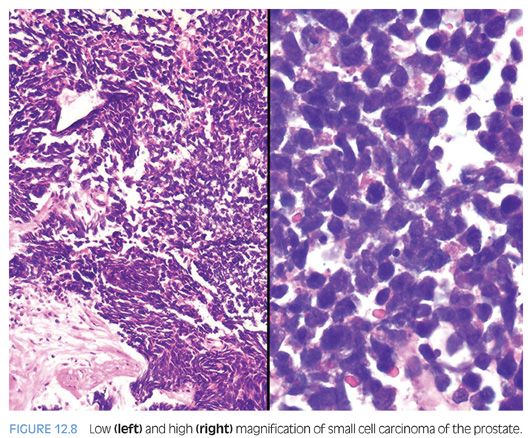 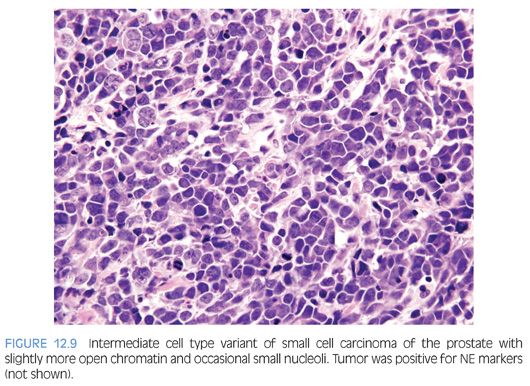 The median cancer-specific survival of patients with small cell carcinoma of the prostate in 191 men according to the Surveillance, Epidemiology, and End Results (SEER) database from 1973 to 2004 was 19 months. Metastatic disease was presented by 60.5% of men, with a decreased survival related to stage. Two- and 5-year survival rates were 27.5% and 14.3%, respectively.72 Given the high rate of occult metastases, clinically localized small cell prostate cancer is typically treated aggressively, often with multimodality therapy with chemotherapy and radiation similar to limited stage small cell lung cancer. Metastatic small cell carcinoma of the prostate is treated with platinum-based combination chemotherapy with regimens similar to those used to treat small cell lung carcinoma.73–76 Some experts treat pure small cell carcinoma with chemotherapy alone, whereas others add ADT.

In summary, small cell carcinoma of the prostate is an aggressive malignancy recognized by relatively typical morphologic features although cases occurring in the prostate may exhibit a slightly wider spectrum of cytologic features than would be allowable at other tumor sites. In tumors showing classic morphology, IHC may not be necessary, although may be frequently useful for confirmation of the diagnosis in view of its important prognostic and therapeutic ramifications.

Large cell neuroendocrine carcinoma (LCNEC) of prostate is exceptionally rare, particularly its pure form. The largest series by Evans et al.77 describes seven cases of LCNEC, only one pure and apparently de novo. Six other cases represented progression from prior typical prostate adenocarcinoma, following long-standing hormonal therapy. According to the authors, the large cell NE component was composed of sheets and ribbons of amphophilic cells with large nuclei, coarse chromatin, and prominent nucleoli (Fig. 12.10). Mitotic activity was high, and foci of necrosis were present. The LCNEC component was strongly positive for CD56, CD57, chromogranin A, synaptophysin, and P504S (Fig. 12.11). Ki67 proliferative index was greater than 50%. LCNEC has also been described in association with small cell carcinoma and adenocarcinoma.78 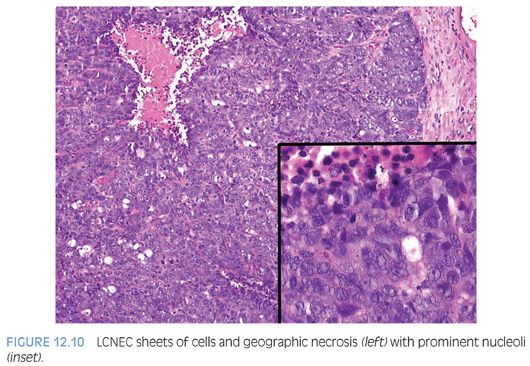 Tags: Biopsy Interpretation of the Prostate
Nov 27, 2016 | Posted by admin in PATHOLOGY & LABORATORY MEDICINE | Comments Off on Neuroendocrine Differentiation in the Benign and Malignant Prostate
Premium Wordpress Themes by UFO Themes
WordPress theme by UFO themes
%d bloggers like this: