Vascular amyloid can be identified in 2% to 10% of prostates removed for hyperplasia or carcinoma.19–22 Patients with multiple myeloma, primary amyloidosis of the kidney, or chronic debilitating diseases have a higher incidence of prostatic amyloidosis. In these cases, amyloid is located in subepithelial areas as well as in vessels. Usually, amyloid within the prostate is an incidental finding, although rarely, it may mimic carcinoma on rectal examination. Amyloidosis, which involves the seminal vesicles in about 10% of radical prostatectomy specimens, can also extend into the ejaculatory duct and can be sampled on needle biopsy19 (Fig. 17.2, eFig. 17.2). Corpora amylacea often stain nonspecifically for amyloid.23 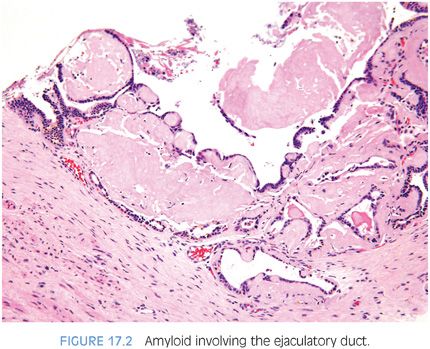 In between 20% and 25% of specimens removed for benign prostatic hyperplasia, prostatic infarcts ranging in size from a few millimeters to 5 cm may be found.28–30 Patients with acute prostatic infarcts have prostate glands that are twice as large as those without infarcts. Also, patients with infarcts are more prone to acute urinary retention and gross hematuria than those without infarcts. These symptoms, however, may not be due to the infarcts but rather may be due to the larger size of the gland containing them, because the infarcts are often small and not close to the urethra. Acute prostatic infarcts are discrete lesions with a characteristic histologic zonation (Figs. 17.3 and 17.4, eFigs. 17.3 to 17.21). The center of the infarct is characterized by acute coagulative necrosis and some recent hemorrhage. Immediately adjacent to the infarcted tissue, reactive epithelial nests with prominent nucleoli, some pleomorphism, and even atypical mitotic figures can be seen (Fig. 17.4). Progressing away from the center of the infarct, more mature squamous metaplasia is seen. Another finding seen within prostatic infarcts is squamous islands with central cystic formation containing cellular debris. Remote infarcts may also be recognized by finding local areas of densely fibrotic stroma admixed with small glands containing immature squamous metaplasia (eFig. 17.22). Prostatic infarcts may rarely be sampled on needle biopsy, where it may be more difficult to appreciate the zonation.29 If the infarct is not recognized, the reactive squamous metaplasia cases may be misdiagnosed as urothelial carcinoma. 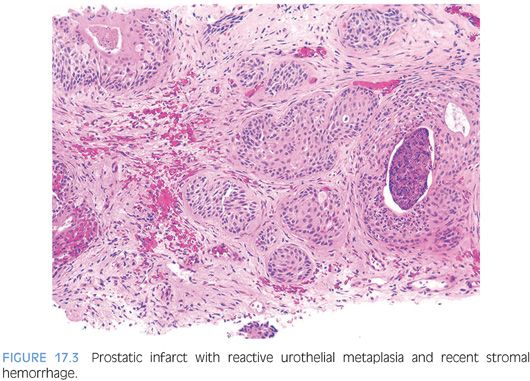 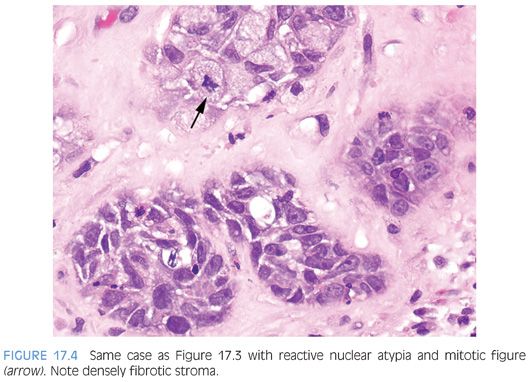 In a study of prostates from a medical examiner’s office, 9% of prostates contained sperm (eFig. 17.23).31 Spermatozoa have been found in approximately one-quarter of whole mount–examined prostatectomies with the aid of special stains.32 Rare cases of prostatic endometriosis, hair granuloma, and lymphangiolipomatosis have been diagnosed.33–35 Vasculitis involving the prostate may occur, including polyarteritis nodosa, Wegener granulomatosis, and giant cell arteritis36–38 (Fig. 17.5, eFigs. 17.24 to 17.26). Extramedullary hematopoiesis, ganglioneuroma, and ectopic salivary gland tissue have been described in the prostate.39–41 A form of metaplasia has been designated “Paneth cell-like metaplasia” or “Paneth cell-like change.”42–44 Histologically, it is characterized by bright eosinophilic neuroendocrine granules filling the apical cytoplasm. The cells are immunoreactive with neuroendocrine markers and some have suggested the use of the alternative terminology of neuroendocrine cells with large eosinophilic granules.44,45 We prefer the term Paneth cell-like neuroendocrine differentiation, which may also be seen in prostatic adenocarcinoma that was previously discussed in Chapter 12.46 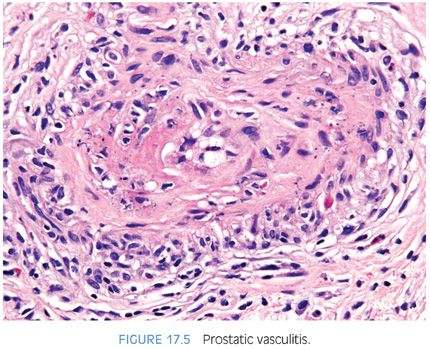 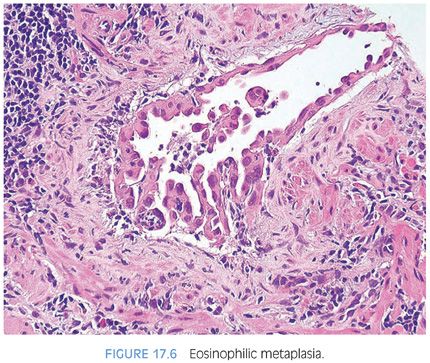 Rarely, the ejaculatory duct may be a site of pathology. Cases of an adenofibroma and an adenomatoid tumor involving this structure have been reported.48,49 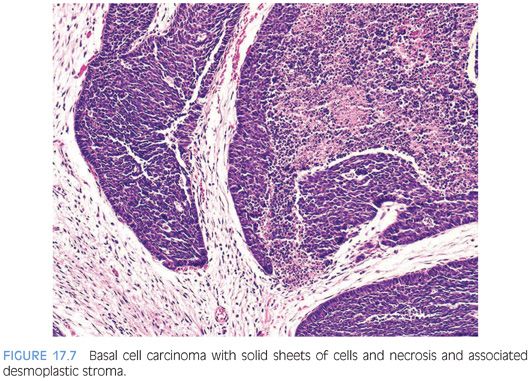 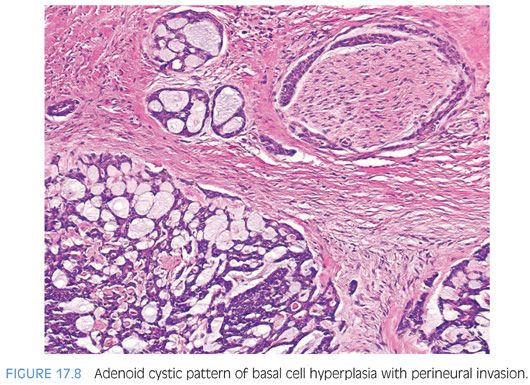 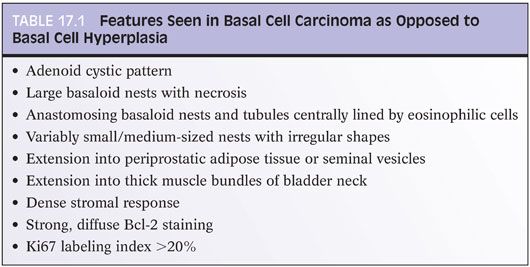 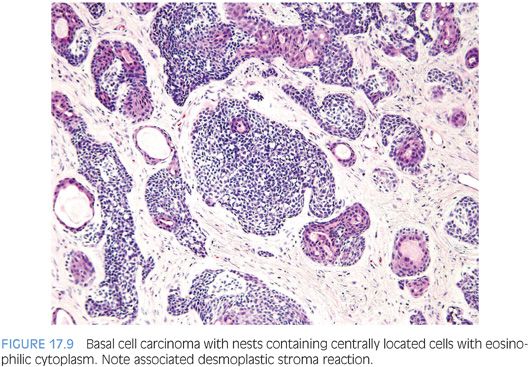 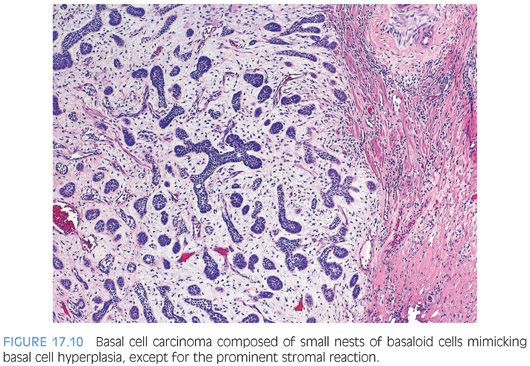 Adenosquamous carcinomas may also be seen in the prostate with and without a prior history of endocrine and/or radiation therapy (Fig. 17.11, eFig. 17.52).63,64 In the largest series reported on adenosquamous carcinomas of the prostate (33 cases from two institutions), the majority of the tumors occurred in patients with a prior established diagnosis of prostatic adenocarcinoma. Approximately one-half of the patients had received prior hormonal therapy and/or radiotherapy.65 The squamous components only rarely demonstrated focal positivity for PSA or PSAP. Diffuse positivity for high molecular weight cytokeratin was encountered in the squamous components of the tumors. The average survival was 24 months (see also Chapter 14). 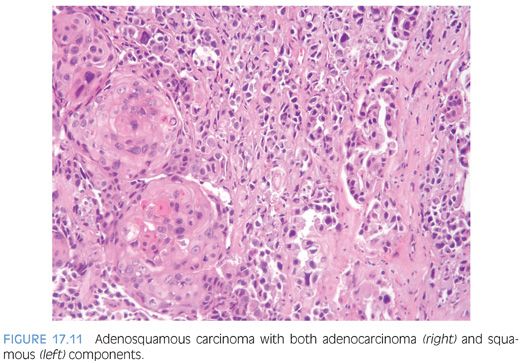 Sarcomatoid carcinoma (carcinosarcoma) is a rare type of prostatic cancer with approximately 100 cases reported in the literature, most reported in three large series of 42, 21, and 12 patients, respectively (Figs. 17.12 and 17.13, eFigs. 17.53 to 17.56).66–68 Tumors are most commonly composed of an admixture of both malignant glandular and spindle cell elements, in which cases with predominantly a sarcomatoid component may be mistaken for a sarcoma. Patients with sarcomatoid carcinoma often have a history of acinar adenocarcinoma of the prostate, although in some cases, the diagnosis may have been as remote as 16 years prior. In our study, the vast majority of patients with known treatment history following the original diagnosis of acinar adenocarcinoma had received external beam radiation, brachytherapy, and/or hormone therapy.67 The interval between the diagnosis of acinar adenocarcinoma and sarcomatoid carcinoma ranged from 6 months to 16 years (mean 6.8 years). Patients are on average about 70 years old. They typically present with urinary tract obstruction and its symptoms. On digital rectal examination, the palpable prostate is often enlarged, nodular, and hard. PSA elevations are variable. Morphologically, sarcomatoid carcinoma demonstrates a variety of patterns. Typically, the glandular component is composed of high-grade acinar adenocarcinoma or an unusual subtype of prostatic carcinoma (small cell, foamy gland, basal cell, ductal, or adenosquamous carcinoma). The sarcomatoid component, which may account for as little as 5% of the tumor, usually demonstrates frank malignant features including hypercellularity, nuclear atypia, frequent mitoses, and focal necrosis. Bizarre tumor giant cells may be present. In approximately one-third of cases, a heterologous element such as osteosarcoma, chondrosarcoma, or rhabdomyosarcoma is encountered. We diagnose these lesions as “sarcomatoid carcinoma (carcinosarcoma).” The epithelial component consists of acinar adenocarcinoma, small cell carcinoma, ductal adenocarcinoma, and so forth, and the mesenchymal component consists of nonspecific malignant spindle cells, osteosarcoma, chondrosarcoma, and so forth. Although there is no prognostic significance to the various histologic elements present, we note them in the report so that if there are subsequent metastases with one of the elements other than usual prostatic adenocarcinoma, one would be still be able to recognize that the metastasis came from the prostatic sarcomatoid carcinoma based on its report. 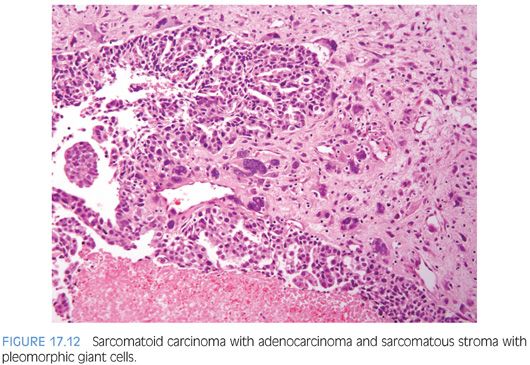