Traditionally, microbiologists have grown bacteria as sus-pension cultures in rich media, in order to optimize cell yield. This planktonic mode of growth also became part of the standard assay on which all existing antimicrobials were selected and developed, and continues to be the basis for the selection of antimicrobials for specific patient treatment. We now recognize that in most envi-ronments, including our bodies, bacteria typically exist as adherent microcolonies termed biofilms, which afford bacteria a number of growth advantages including an inherent lack of susceptibility to antimicrobials. This antimicrobial tolerance differs from classical genetic resistance in that this reduced susceptibility disappears when the biofilm is returned to planktonic growth. Biofilm tolerance is multifactorial, which includes the spatial and structural parameters of the biofilm as well as the increased phenotypic diversity within the biofilm population. Biofilms are believed to be associated with approximately 60% of human infections including chronic, recurrent and device-related infections, there-fore treatment of biofilm infections has become an important focus in modern medicine. As planktonic susceptibility testing, via the minimal inhibitory concen-tration (MIC) test, provides little guidance in the selec-tion of antimicrobials to treat biofilms, a change in paradigm is required to determine appropriate treatment of biofilms and for the discovery of next-generation antimicrobials.

Biofilms are microcolonies of one or more species of bacteria or fungi typically growing adherent to a biotic or abiotic surface. Biofilms form to allow bacteria to maintain themselves in a niche of their choosing rather than being washed away by the shear force of running water in the natural environment or the movement of body fluids and mucins in the body. Biofilms provide a more energy-efficient means of growth, capturing nutrients as they flow past and easily expelling waste. They also provide a more secure environment for sustainability, making it difficult for phagocytes, found both in nature and as part of the immune system, to eradicate the biofilm. Also, as a biofilm, bacteria and fungi are less susceptible to antimicrobials, allowing them to be more tolerant than their planktonic brethren to antibiotics found in nature and those used clinically. A cartoon of the biofilm life cycle of bacteria is shown in Figure 8.1. In the centre of the figure bacteria exist in a mature biofilm that may be formed from many species, as in a consortium formed on the face of a rock in a stream or those found in the mouth, as part of our dental plaque. Chemical signals regulate the interactions between members of the biofilm just as hormones regulate the cells of our body. For example, under specific stress con-ditions appropriate signalling may lead to an increase in phenotypic diversity within the biofilm to accommodate the stress or these signals may cause bacteria to revert to their more motile planktonic phenotype and leave the biofilm to establish new microcolonies that will give rise to a mature biofilm. 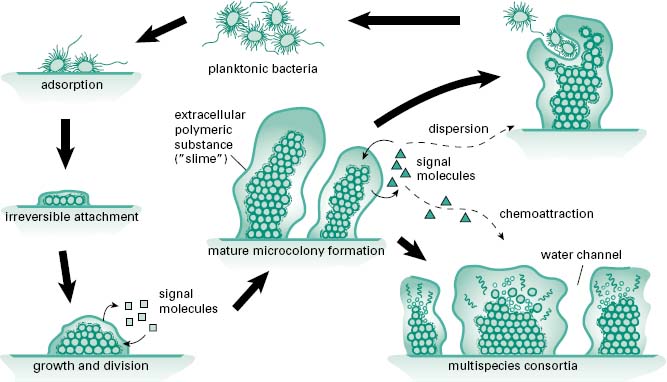 2.1 Biofilms in nature and the consequences to health

Bacteria exist often as multispecies biofilms in nature, which may allow pathogens to survive in nature away from their natural host where they may serve as a nidus for reinfection. Examples of this are enteric organisms that form biofilms in drinking-water pipes or in wells. Following an original contamination event, biofilms allow for sustainability of these populations, which then serve to shed further organisms into potable water supplies, even after the apparent clearance of the original contamination event. Contamination of our groundwater sources pose concerns for the future of our potable water supplies; this threat is accentuated by the stability that biofilms of these contaminants bring into the equation.

2.2 Biofilms in the food industry

Food-borne outbreaks of infections are often associated with biofilms formed on the hard surfaces of food-processing plants, such as tables, knives and processing equipment. The inherent resistance of biofilms to many biocides used in the cleaning process allows these bacteria to multiply and contaminate food products.

Nosocomial infections within healthcare facilities often result from pathogens surviving in the environment as biofilms. Biofilms may facilitate carriage by patients, hospital staff, or visitors, as for example in colonization of nasal passages by meticillin-resistant Staphylococcus aureus (MRSA). Biofilms may also become associated with hard surfaces, drains or waterpipes within the facility. Infections may also be associated with instruments or devices used in the hospital, such as the contamination of endoscopes by biofilms, where they are responsible for the passage of infectious organisms from one patient to another. Whether biofilms form on animate or inanimate surfaces, their recalcitrant nature makes it difficult to remove them from the environment.

Medical devices have become an essential aspect of patient care, with tens of millions of implantable or indwelling medical devices (such as catheters, endotracheal tubes, artificial joint protheses and so on) used each year in patients worldwide. However, despite the evolution of medical devices and the biomaterials from which they are manufactured, their use in vivo is significantly compromised by their seemingly ubiquitous propensity to succumb to microbial colonization and biofilm formation, otherwise known as medical device-associated infection. Immediately after implantation, the device surface becomes modified by the adsorption of host-derived proteins, extracellular matrix proteins, coagulation products, etc., depending on the site. This ‘conditioning film’ renders the surface of the device favourable for microbial adhesion and is often followed by rapid primary attachment of microorganisms to the material surface and biofilm formation.

Healthcare-associated infections typically occur at four main body sites (urinary tract, respiratory tract, surgical sites and bloodstream infections), three of which (UTI, pneumonia, bloodstream infections) are commonly associated with the use of indwelling devices. Indeed, around 95% of nosocomial UTIs reported are linked to the use of urological devices (mainly urinary catheters), and more than 85% of nosocomial respiratory infections (mainly VAPs) are device-related. Central venous catheters pose the greatest risk of mortality due to catheter-related bloodstream infections, with incidences in the USA ranging from 100 000 to 500 000 cases annually, resulting in more than 25 000 deaths per year. Although these represent the most common deviceassociated infections, it is worth noting that all types of implantable medical device are susceptible to infection: for example, peritoneal catheter infections in peritoneal dialysis, orthopaedic implant infections, and biofilm formation on prosthetic heart valves. In addition to patient morbidity and mortality, device-associated infections impose significant financial burdens on healthcare providers, related primarily to increased hospitalization time and associated care costs. Despite this, the use of and dependence on implantable, indwelling medical devices increases annually, correlated to an increasing ageing population in industrialized nations.

3 Tolerance of biofilms to antimicrobials

With the discovery of antibiotics the world changed. Acute infectious diseases, the leading cause of morbidity and mortality in humans, became treatable, resulting in an increase in life expectancy and quality of life. While infections continue to be a leading contributor to mortality, they are often associated with pre-existing conditions that compromise the patient. However, what became known as the ‘antibiotic era’ is now being compromised itself by the emergence of more and more antibioticresistant strains of bacteria that have caused modern medicine to question if we are not now entering the ‘postantibiotic era’.

It is now recognized that these chronic infections involve bacteria associated within biofilms. In fact the US Food and Drug Administration (FDA) and Centers for Disease Control (CDC) both state that more than 60% of North American infections involve biofilms. We also now recognize that the confounding issue in the treat-ment of chronic infections is the inherent tolerance of biofilms to antibiotics predicted to have efficacy against the organism on the basis of planktonic susceptibility testing. In fact, Ceri and colleagues demonstrated that for an antibiotic to be effective in biofilms can require a concentration over 1000 times that needed to treat the same planktonic population (Ceri et al. 1999); concentra-tions that cannot be achieved or used safely in patient treatment. This altered tolerance to drugs is an adaptation of the biofilm, as bacteria derived from the biofilm show the same susceptibility profile as planktonics when the organisms are returned to the planktonic growth phase.

This reduced susceptibility to antibiotics differs from antibiotic resistance in a number of fundamental ways. First, this tolerance is only demonstrated when the isolate is in the biofilm mode of growth and is lost when the culture is returned to planktonic growth, hence it is not a permanent genetic change. Secondly, tolerance implies that the biofilm is not killed by the antimicrobial but it may not necessarily be able to grow in the presence of the drug, whereas in resistance the organism can grow in the presence of the antimicrobial. The tolerance of biofilm populations to antimicrobials would imply that in many instances of chronic infections microbes are in fact exposed to sublethal concentrations of drug, which may be an important implication in the development of clas-sical antimicrobial resistance.

It is now believed that the tolerance to antimicrobials displayed by biofilms is a multifactorial process involving, to some degree or another, a number of different mechanisms contributing to the survival of the population, if not the individual cell. A model for this multifactorial tolerance is shown in Figure 8.2. Contributing to the tolerance of biofilms are factors ranging from the structural components of the biofilm, the physiological potential of cells spread throughout the biofilm and the expression of the genetic phenotypes of disparate populations of cells, all derived from the original clonal population(s) that made up the biofilm.

Figure 8.2 Factors contributing to antimicrobial tolerance of biofilms. (1) Low O2 and decreased nutrient levels near the centre of the microcolony result in slow microbial bacterial growth and hence tolerance to antibiotic drugs which are more effective against fast-growing cells. (2) Intercellular signals can alter biofilm physiology, resulting in expression of molecular efflux pumps which expel antibiotics from the cells allowing the community to grow even in the presence of antimicrobial drug. (3) Negatively charged biofilm matrix may bind positively charged antimicrobials retarding their penetration into the biofilms. (4) Persister cells, a specialized population of cells which do not grow but do not die in the presence of antibiotic. Persister cells can, upon removal of the antimicrobial challenge, give rise to a normal bacterial colony. (5) Genetic and physiological diversity within the population act as an ‘insurance policy’, improving the chances that some cells survive any challenge. (From Harrison, J.J. et al. (2005) Biofilms. Am Sci, 93, 508–515, with permission from American Scientist.) 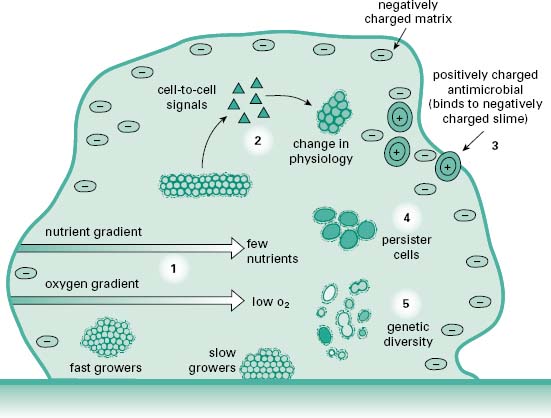 < div class='tao-gold-member'>
Only gold members can continue reading. Log In or Register to continue