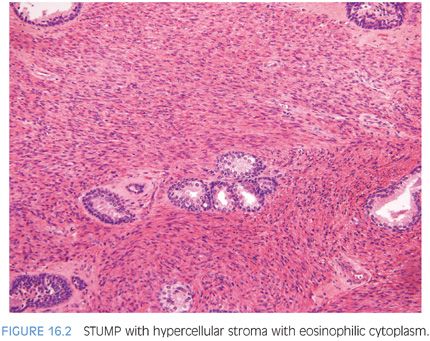 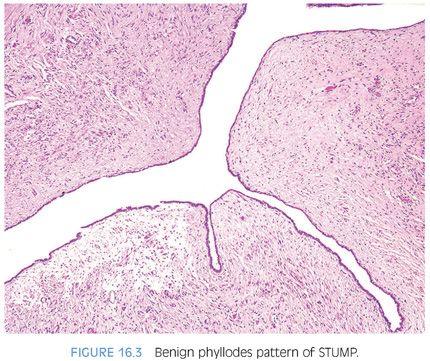 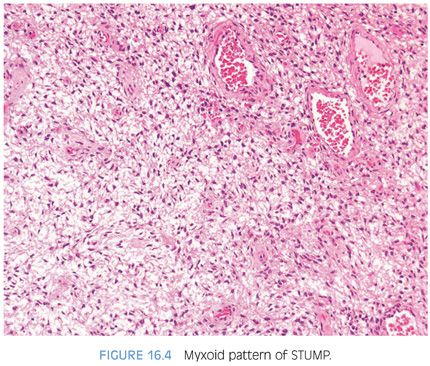 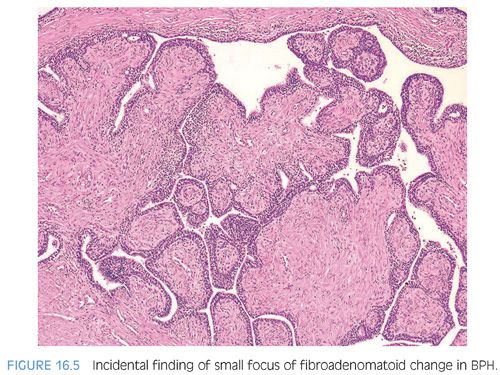 Approximately half of all reported cases of STUMP demonstrate the first pattern of hypercellular stroma containing atypical cells intermixed with, but not compressing, benign glands. The atypical stromal cells in these cases are pleomorphic and hyperchromatic, with a marked degenerative appearance. Mitotic figures are typically absent and atypical mitoses should not be seen. Cases of STUMP demonstrating hypercellular, elongated, bland stromal cells with admixed glands may be occasionally misdiagnosed as a cellular stromal proliferation associated with BPH, although the extent of hypercellularity and often more eosinophilic nature of the cytoplasm are unique. The benign phyllodes pattern of STUMP may also contain atypical, degenerative-appearing stromal cells and may be associated with a variety of benign epithelial proliferations, including basal cell hyperplasia, adenosis, and sclerosing adenosis. Finally, the myxoid pattern of STUMP may be confused with stromal nodules of BPH, although the myxoid pattern of STUMP consists of extensive sheets of myxoid stroma without the nodularity identified in BPH. Occasionally, the extensive myxoid stroma is admixed with benign prostate glands.4 In contrast to myxoid STUMPs, stromal BPH is nodular and contains thick-walled arterioles cut in cross section (Figs. 16.6 and 16.7). 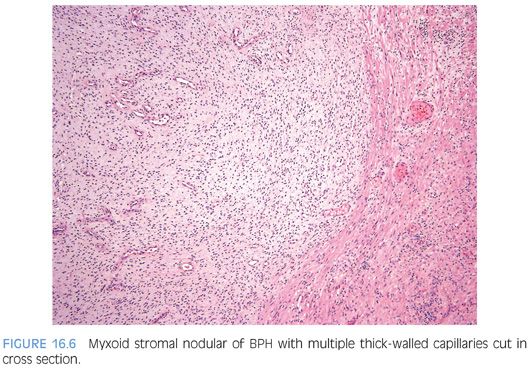 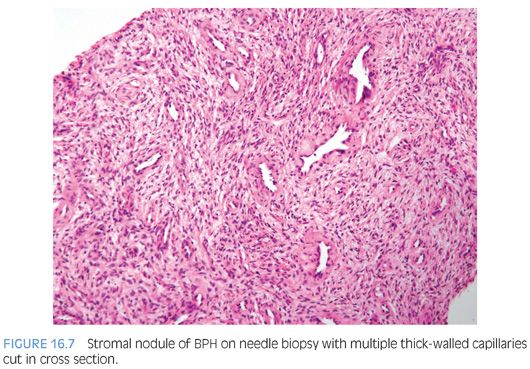 STUMPS and stromal sarcomas, although the neoplastic cells are mesenchymal, often have associated epithelial proliferations. These include adenosis, glandular crowding and complexity, prostatic intraepithelial neoplasia (PIN), squamous metaplasia, urothelial metaplasia, basal cell hyperplasia, adenosis, and clear cell cribriform hyperplasia (Fig. 16.8). Within these tumors, there is epithelial-mesenchymal crosstalk, as has been described in benign prostate and in prostatic carcinogenesis. In unusual cases of STUMP, the epithelial proliferation may predominate to the extent that it can mask the diagnosis of STUMP.5 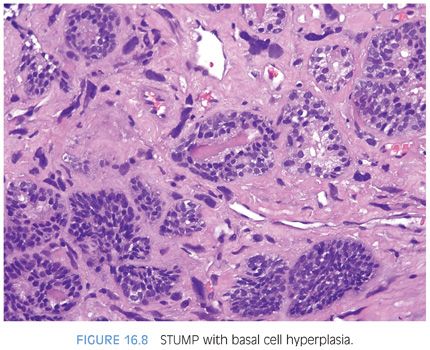 Most cases of STUMP are positive for CD34 and vimentin and variably positive for smooth muscle actin and desmin (Table 16.1).6 Due to the derivation of these tumors from the prostatic stroma, progesterone receptor is frequently present on immunostaining, although estrogen receptor is less commonly positive. C-kit and S100 have been negative in all cases examined. Most STUMPs carry chromosomal alterations consistent with a neoplastic process, disproving earlier proposals that STUMPs were BPH with degenerative atypia.7 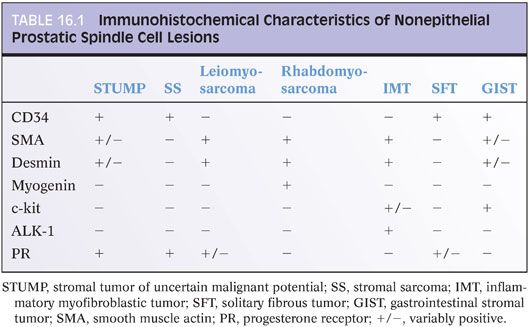 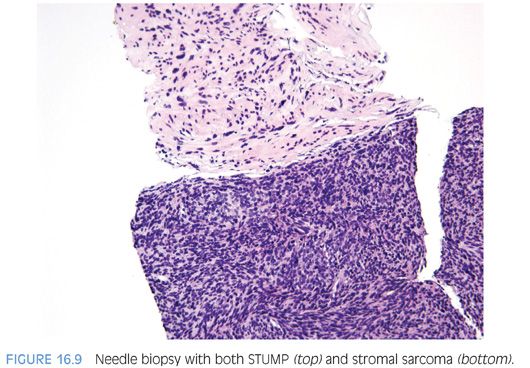 In contrast to STUMPs, stromal sarcomas tend to affect a slightly younger population, with a reported age range of 25 to 86 years (eFigs. 16.30 to 16.37). Approximately half of all reported cases of stromal sarcoma occur before the age of 50 years. Stromal sarcomas may arise de novo or may exist in association with either a preexistent or concurrent STUMP.

Gross examination of stromal sarcomas demonstrates predominantly tan-white, solid, fleshy lesions ranging in size from 2 to 18 cm. Occasionally, areas of edema, hemorrhage, or small cysts may be identified. Microscopically, stromal sarcomas demonstrate either a solid growth of neoplastic stromal cells, which may have storiform, epithelioid, fibrosarcomatous, or patternless patterns, or may infiltrate between benign prostatic glands (Figs. 16.10 and 16.11). Less commonly, stromal sarcomas may demonstrate leaflike glands with underlying hypercellular stroma, which are also termed malignant phyllodes tumors (Fig. 16.12). Stromal sarcomas have one or more of the following features within the spindle cell component: hypercellularity, cytologic atypia, mitotic figures, and necrosis. The finding of even a single atypical mitotic figure rules out a STUMP and leads to the diagnosis of stromal sarcoma (Fig. 16.13). Stromal sarcomas may additionally be subclassified into low and high grades, with high-grade tumors defined by moderate-marked pleomorphism and hypercellularity, often with increased mitotic activity and occasional necrosis. Rarely, adenocarcinomas of the prostate can involve a stromal sarcoma. 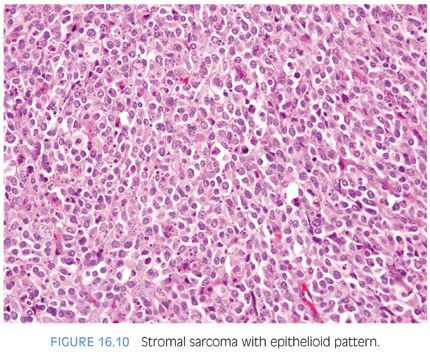 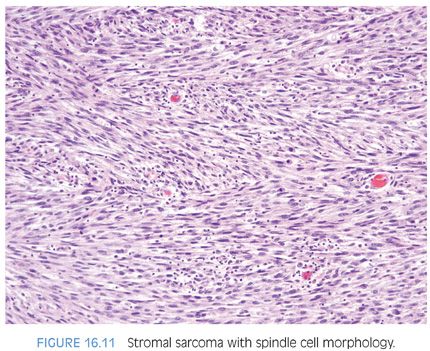 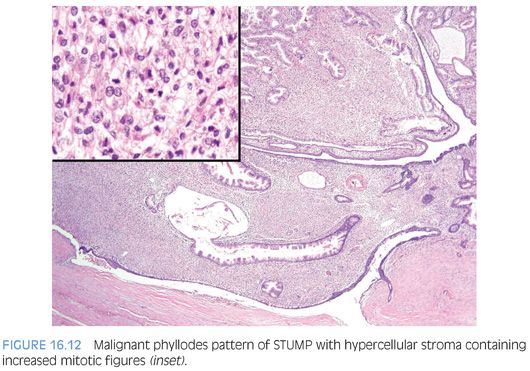 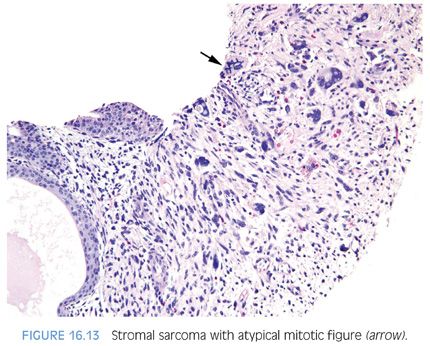 Immunohistochemical findings are similar to those of STUMPs, with strong vimentin reactivity and positivity for CD34 and progesterone receptor. In a subset of cases studied, pancytokeratin and CAM5.2 stains were negative. One case of stromal sarcoma was reported to demonstrate nuclear reactivity for beta-catenin, although the significance of this finding is unclear. Stromal sarcomas can extend out of the prostate and metastasize to distant sites such as bone, lung, abdomen, and retroperitoneum.

The variability in behavior of STUMPs and stromal sarcomas and their occasional coexistence lead to challenges in patient management. Although many STUMPs may behave in an indolent fashion, their unpredictability in a minority of cases and the lack of correlation between different histologic patterns of STUMPs and sarcomatous dedifferentiation warrant close follow-up and consideration of definitive resection in younger individuals. Factors to consider in deciding whether to proceed with definitive resection for STUMPs diagnosed on biopsy include patient age and treatment preference, presence and size of the lesion on rectal exam or imaging studies, and extent of the lesion on tissue sampling. Expectant management with close clinical follow-up could be considered in an older individual with a limited lesion on biopsy where there is no lesion identified on digital rectal exam or on imaging studies.

It is difficult to diagnose a leiomyoma of the prostate, mainly because it is difficult to distinguish from a stromal nodule of benign hyperplasia.8 Both entities may contain abundant smooth muscle, although leiomyomas typically demonstrate well-organized fascicles and may have other degenerative features such as hyalinization and calcification that are not commonly seen in stromal nodules. Large single leiomyomas that are symptomatic are rare, with the largest measuring 12 cm.9,10 Leiomyomas demonstrate virtually no mitotic activity and minimal to no nuclear atypia, with the exception of occasional scattered degenerative nuclei in a normocellular background (eFig. 16.38).

Sarcomas of the prostate account for 0.1% to 0.2% of all malignant prostatic tumors.11 Leiomyosarcoma is the most common sarcoma involving the prostate in adults, yet is still rare, affecting men between the ages of 40 and 78 years. It most frequently presents with urinary obstruction, as well as perineal/pelvic pain, urinary frequency, hematuria, constipation, rectal pain, and pain or burning on ejaculation.11–14 Tumors vary from 1 to 25 cm, with the majority of reports of lesions between 5 and 10 cm. Microscopically, these hypercellular lesions are composed of intersecting bundles of spindled cells with moderate to severe atypia (Fig 16.14, eFigs. 16.36 to 16.44). The vast majority of leiomyosarcomas in the literature have been high grade with frequent mitoses and necrosis, although we have also seen rare cases of low-grade prostatic leiomyosarcoma.15 Epithelioid leiomyosarcomas have been reported in the prostate.12 Low-grade leiomyosarcomas are distinguished from leiomyomas by moderate amount of atypia, focal areas of increased cellularity, scattered mitotic figures, and/or a focally infiltrative growth pattern around benign prostate glands at the perimeter. Symplastic leiomyomas have, in contrast, scattered atypia of a degenerative nature with an overall low cellularity (eFig 16.45). As opposed to some stromal sarcomas, leiomyosarcomas lack admixed normal glands, except entrapped glands at the periphery. 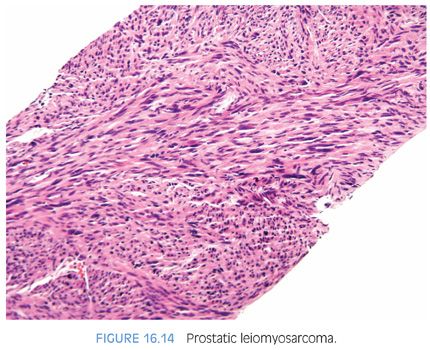 Leiomyosarcomas commonly express vimentin, actin, and desmin. Cytokeratin expression is observed in about one-quarter of cases.12 In addition, some leiomyosarcomas have been reported to express the progesterone receptor, similar to STUMPs and stromal sarcomas16 (Table 16.1).

Patients with leiomyosarcoma commonly have a poor outcome, with the clinical course characterized by multiple recurrences. The majority (50% to 75%) of patients die from disease within 2 to 5 years with metastatic spread most commonly to the lungs, often several years following initial diagnosis. In the study by Sexton et al.,11 the prognosis for leiomyosarcoma of the prostate, as for sarcomas of the prostate in general, was not dependent on stage, with the exception of a better prognosis for those men who presented without distant metastases. The only other variable that these authors found to be predictive of a favorable prognosis was complete surgical resection with microscopically negative margins. Optimal treatment requires a multimodal approach rather than surgery alone. They also noted that survival of patients with isolated local recurrences could be prolonged with salvage surgery. In a report of dedifferentiated leiomyosarcomas from all sites, there was one prostate leiomyosarcoma metastatic to the lungs with 36 months’ survival with disease.17

A controversial spindle cell lesion arising most commonly in the bladder but rarely also seen in the prostate has been described by a variety of terms in the literature, including pseudosarcomatous fibromyxoid tumor, myofibroblastoma, nodular fasciitis of bladder, pseudosarcomatous myofibroblastic proliferation, inflammatory pseudotumor, and most recently inflammatory myofibroblastic tumor (IMT).18–23 A smaller subset of these lesions occurs following recent transurethral resection for BPH and has been designated postoperative spindle cell nodule.20,22 Although lesions occurring in the setting of prior injury and those arising as de novo prostatic lesions have in the past been considered as separate entities, it is now considered that both are the same lesion. Regardless of whether there is or there is not a prior history of instrumentation, lesions have overlapping morphologic, immunohistochemical, and molecular features and demonstrate the same clinical behavior. Of the two largest series of these lesions, one has designated them as pseudosarcomatous fibromyxoid tumor and the other as IMT. As a result of their morphology and genetic changes, we prefer the designation of IMT.

IMTs of the prostate have been reported in men ranging in age from 42 to 67 years, although IMTs within the bladder have been reported in patients between 3 and 86 years of age.19,21 In contrast to many other spindle cell lesions of the prostate, IMTs may be fairly small, with many cases less than 1 cm in size. Other cases may be very large IMTs of the prostate, which are, for the most part, morphologically identical to those found at other sites. Spindle cells may be composed into intersecting fascicles resembling a smooth muscle tumor or appear more haphazard in their distribution (Table 16.2). The spindle cells have abundant eosinophilic to amphophilic long tapering cytoplasm resembling reactive fibroblasts (Fig. 16.15). Nuclei are elongated and uniform, containing delicate chromatin patterns and one or two distinct nucleoli. Occasionally, there may be prominent nucleoli with occasional moderately pleomorphic cells, yet an important distinguishing feature from sarcomas is that nuclei are not hyperchromatic. Prominent myxoid change in sarcomas arising within the prostate is also unusual. There is a scattering of chronic inflammatory cells, which along with the presence of prominent dilated capillaries throughout the lesion, bear some similarities to granulation tissue. Mitotic figures may be variable, ranging from 1 to 25 per 10 high power fields (HPF), yet atypical mitotic figures are not seen. 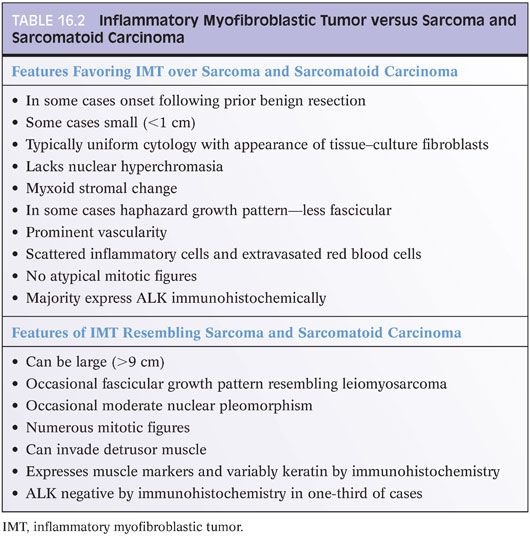