Melanoma In Situ Versus Paget’s Disease

MIS characterized by smaller, less atypical melanocytes may be partially obscured by surrounding pigmented basal keratinocytes on chronically sun-exposed skin. MIS also may be partially obscured by an associated interface/lichenoid inflammatory infiltrate, by an adjacent pigmented seborrheic keratosis, solar lentigo, or pigmented actinic keratosis [19]. The amelanotic variant of MIS also can be difficult to identify in routine hematoxylin- and eosin-stained sections (Fig. 13.2). Given the considerable variability of histological features, evaluation of MIS by frozen section without use of additional special studies, especially for the purposes of surgical margin assessment, is not recommended [20]. 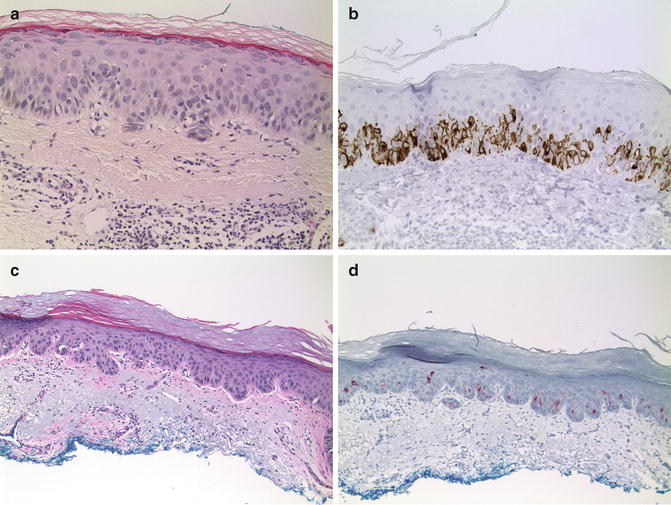 Immunohistochemistry of melanoma in situ. (a) Amelanotic MIS on chronically sun-damages skin. Melanocytes are not easily recognized in the routine hematoxylin and eosin-stained section (×20). (b) Immunohistochemical labeling for gp100 (using HMB45) on the same amelanotic lentigo maligna (×20). (c) Actinic keratosis at the edge of MIS (×10). (d) Labeling for gp100 highlights atypical melanocytes, including cells in superficial layers of the actinic keratosis (×10)

Diagnosis of MIS is straightforward and special studies such as immunohistochemistry are not needed in most cases. Immunohistochemistry proves to be an invaluable diagnostic tool; however, for amelanotic MIS and for MIS in which melanocytes are partially obscured by an associated lichenoid inflammatory infiltrate or by an adjacent pigmented epithelial lesion [19, 21] (Fig. 13.2).
Markers of melanocyte differentiation such as melanosomal glycoproteins (e.g. gp100, gp75, or Melan A/MART-1) are commonly employed to better enumerate intraepidermal atypical melanocytes [21–25]. Some of these markers also have been advocated for improving accuracy of margin assessment in Mohs micrographic surgery [26, 27], although the specificity of labeling using Melan A/MART-1 has been questioned [28]. Immunohistochemistry also has been used to document expression of nuclear proteins microphthalmia transcription factor (MiTF) and SOX-10 for MIS containing abundant melanin that may obscure cytoplasmic labeling for melanosomal glycoproteins [29–34]. Immunohistochemistry may facilitate identifying areas of melanocyte confluence along the basal layer and “pagetoid” scatter regardless of the marker employed. S100 protein may be useful [35, 36], but is a less reliable marker for MIS because intraepidermal dendritic Langerhans cells also display labeling and some melanocytes on chronically sun-exposed skin are negative [22].
The absence of expression of melanocyte markers also is helpful to rule out MIS in cases of Paget’s disease or extramammary Paget’s disease. As expected, markers of epithelial differentiation such as cytokeratin, carcinoembryonic antigen (CEA), or epithelial membrane antigen (EMA) are not expressed in MIS [36–38].

Similar to MIS, Paget’s disease and extramammary Paget’s disease are characterized by intraepidermal proliferation of cytologically atypical epithelial cells disposed singly and as clusters (Fig. 13.3). Larger clusters of cells may form luminal structures, but this feature is not prominent. The atypical cells are scattered throughout the epidermis at all levels, but tend to concentrate more toward the basal layer. Most cells have abundant slightly basophilic cytoplasm. Cytoplasmic melanin may be present in the atypical cells. Mitotic figures usually are present. Histochemical stains for epithelial mucin (Colloidal Iron, Alcian Blue pH 2.5, and Mucicarmine) are more strongly reactive in cases of extramammary Paget’s disease.

Extramammary Paget’s disease. (a) Cytologically atypical epithelioid cells are scattered throughout the epidermis (×20). (b) Note the basophilic vacuolated cytoplasm and nuclear atypia of the carcinoma cells (×40)

Epithelial markers, such as CEA, and cytokeratin 7 (CK7) are helpful to distinguish Paget’s disease from MIS [23, 36–38, 50, 51] (Fig. 13.4). Labeling for melanocyte markers such as gp100 or Melan A/MART-1 must be interpreted with caution in pigmented lesions as labeled normal melanocytes may be closely apposed to clusters of carcinoma cells [52] (Fig. 13.4). Other markers also have been shown to reliably distinguish Paget’s disease/extramammary Paget’s disease from MIS [53, 54]. 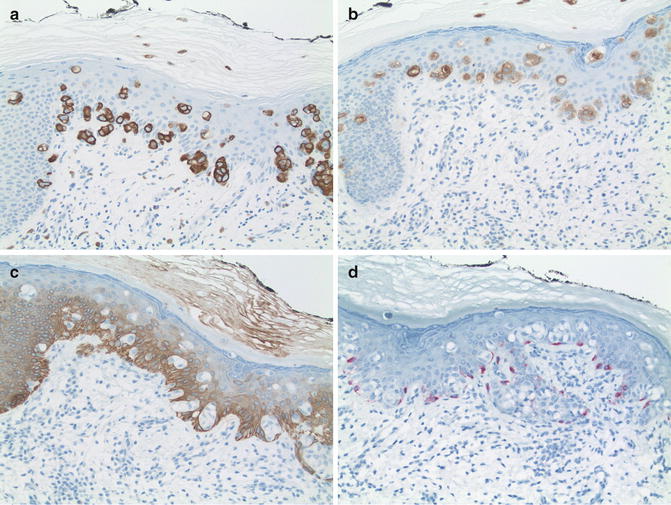 Another important differential diagnosis for MIS includes pagetoid Bowen’s disease (pagetoid squamous cell carcinoma in situ). Pagetoid Bowen’s disease presents as an erythematous scaly patch, most often on chronically sun-exposed skin [55]. Other areas may be involved especially in the setting of predisposing factors of prior immunosuppressive therapy for organ transplant or a history of exposure to certain environmental toxins such as arsenic [56, 57]. Occasionally, the scaly patch may be hyperpigmented raising the suspicion of MIS/lentigo maligna [58–64]. Most lesions have an ill-defined border and expand slowly over a period of many years.

Pagetoid Bowen’s disease is characterized by large, often pale-staining atypical keratinocytes scattered within the epidermis at all levels (Fig. 13.5). The atypical keratinocytes are disposed singly and in small clusters resembling MIS or Paget’s disease. Some of the atypical cells may contain notable cytoplasmic melanin. Mitotic figures and apoptotic cells are scattered in supra-basal layers as well. Clusters of atypical cells do not form luminal structures as in Paget’s disease. Careful examination of the entire section often will reveal areas with cytologically atypical cells throughout the full thickness of the epidermis facilitating the diagnosis of squamous cell carcinoma in situ. Areas of full-thickness atypia may not be present in very small biopsies. In such cases, careful examination of the granular cell layer should be performed. The presence of atypical cells containing keratohyaline granules confirms a diagnosis of Bowen’s disease. Unlike melanin, keratohyaline granules are not transferred between adjacent cells and their presence in a cytologically atypical cell serves as a valuable marker of keratinocyte differentiation. Histochemical stains for epithelial mucin are negative, but this feature would not rule out MIS or Paget’s disease. Stains for melanin may be positive or negative depending on the amount of melanin transfer from adjacent normal melanocytes, and as such, are not of value. 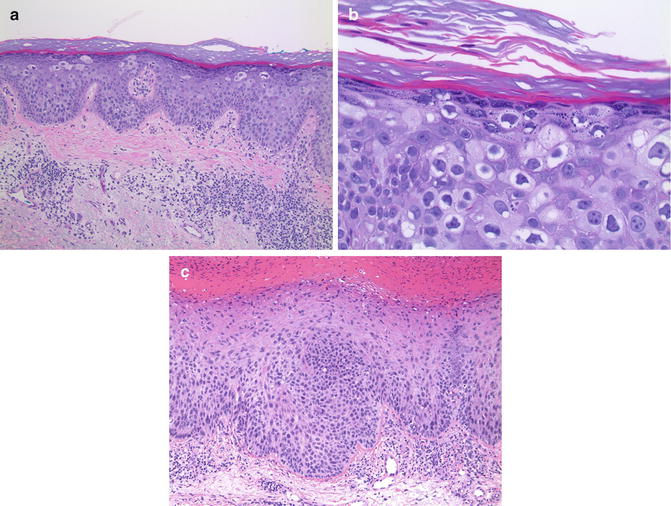 One histological sub-type of seborrheic keratosis (SK) is the so-called “clonal” variant. This histological variant is believed to result from chronic irritation/trauma and has recognizable changes on dermoscopy [70]. Irritated SKs often have a clinical differential diagnosis of squamous cell carcinoma, making their histological distinction from Bowen’s disease most relevant.

The “clonal” variant of irritated SK is characterized by intraepidermal, circumscribed clusters of similar-appearing keratinocytes within a lesion architecturally compatible with ordinary SK (Fig. 13.6). Importantly, the keratinocytes within these clusters lack significant nuclear atypia or pleomorphism. Mitotic figures and dyskeratotic/apoptotic cells are rare. Pagetoid scatter of single atypical keratinocytes is not observed. The “clonal” cells lack keratohyaline granules and most usually contain very little cytoplasmic melanin. Histochemical stains for epithelial mucin are negative.

Clonal seborrheic keratosis. (a) Well-circumscribed clusters of keratinocytes form “pseudo-nests” within the epidermis (×10). (b) Keratinocytes within the nest do not exhibit significant nuclear atypia. Dyskeratotic cells and mitotic figures are absent (×40)

Melanoacanthomas and pigmented SK have a similar clinical appearance to irritated/clonal SK, but are more pigmented [72–79]. The clinical differential diagnosis often includes an atypical nevus and melanoma in larger lesions. Larger ulcerated lesions are especially worrisome for melanoma. 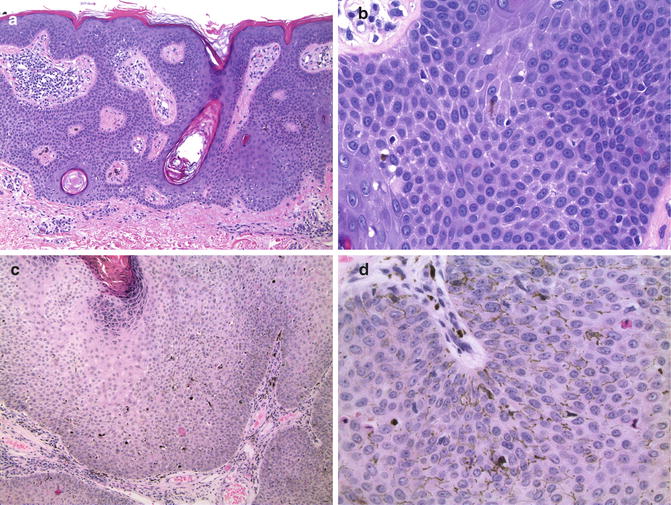