Host defenses are composed of two complementary, frequently interacting systems: (1) innate (nonspecific) defenses, which protect against microorganisms in general; and (2) acquired (specific) immunity, which protects against a particular microorganism. Innate defenses can be classified into three major categories: (1) physical barriers, such as intact skin and mucous membranes; (2) phagocytic cells, such as neutrophils, macrophages, and natural killer cells; and (3) proteins, such as complement, lysozyme, and interferon. Figure 8–1 shows the role of several components of the nonspecific defenses in the early response to bacterial infection. Acquired defenses are mediated by antibodies and T lymphocytes. Chapter 57 describes these host defenses in more detail. 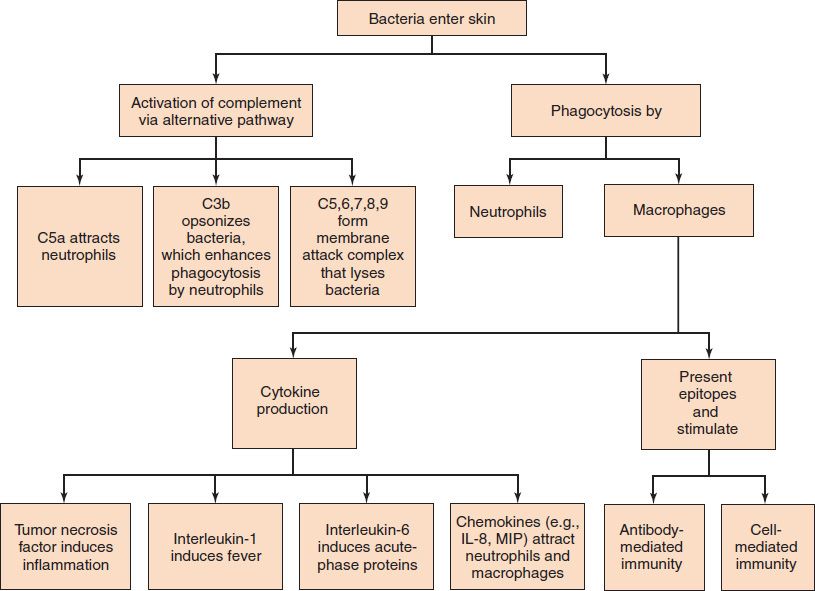 There are two main types of host defenses against bacteria: the pyogenic response and the granulomatous response. Certain bacteria, such as Staphylococcus aureus and Streptococcus pyogenes, are defended against by the pyogenic (pus-producing) response, which consists of antibody, complement, and neutrophils. These pyogenic bacteria are often called extracellular pathogens because they do not invade cells. Other bacteria, such as Mycobacterium tuberculosis and Listeria monocytogenes, are defended against by the granulomatous response, which consists of macrophages and CD4-positive (helper) T cells. These bacteria are often called intracellular pathogens because they can invade and survive within cells.

Intact skin is the first line of defense against many organisms. In addition to the physical barrier presented by skin, the fatty acids secreted by sebaceous glands in the skin have antibacterial and antifungal activity. The increased fatty acid production that occurs at puberty is thought to explain the increased resistance to ringworm fungal infections, which occurs at that time. The low pH of the skin (between 3 and 5), which is due to these fatty acids, also has an antimicrobial effect. Although many organisms live on or in the skin as members of the normal flora, they are harmless as long as they do not enter the body.

A second important defense is the mucous membrane of the respiratory tract, which is lined with cilia and covered with mucus. The coordinated beating of the cilia drives the mucus up to the nose and mouth, where the trapped bacteria can be expelled. This mucociliary apparatus, the ciliary elevator, can be damaged by alcohol, cigarette smoke, and viruses; the damage predisposes the host to bacterial infections. Other protective mechanisms of the respiratory tract involve alveolar macrophages, lysozyme in tears and mucus, hairs in the nose, and the cough reflex, which prevents aspiration into the lungs.

Loss of the physical barrier provided by the skin and mucous membranes predisposes to infection. Table 8–1 describes the organisms that commonly cause infections associated with the loss of these protective barriers.

The nonspecific protection in the gastrointestinal tract includes hydrolytic enzymes in saliva, acid in the stomach, and various degradative enzymes and macrophages in the small intestine. The vagina of adult women is protected by the low pH generated by lactobacilli that are part of the normal flora.

Additional protection in the gastrointestinal tract and in the lower respiratory tract is provided by defensins. These are highly positively charged (cationic) peptides that create pores in the membranes of bacteria, which kills them. Neutrophils and Paneth cells in the intestinal crypts contain one type of defensin (α-defensins), whereas the respiratory tract produces different defensins called β-defensins. The mechanism by which defensins distinguish between bacterial membranes and human cell membranes is unknown.

The bacteria of the normal flora of the skin, nasopharynx, colon, and vagina occupy these ecologic niches, preventing pathogens from multiplying in these sites. The importance of the normal flora is appreciated in the occasional case when antimicrobial therapy suppresses these beneficial organisms, thereby allowing organisms such as Clostridium difficile and Candida albicans to cause diseases such as pseudomembranous colitis and vaginitis, respectively.

The presence of foreign bodies, such as bacteria within the body, provokes a protective inflammatory response (Figure 8–2). This response is characterized by the clinical findings of redness, swelling, warmth, and pain at the site of infection. These signs are due to increased blood flow, increased capillary permeability, and the escape of fluid and cells into the tissue spaces. The increased permeability is due to several chemical mediators, of which histamine, prostaglandins, and leukotrienes are the most important. Complement components, C3a and C5a, also contribute to increased vascular permeability. Bradykinin is an important mediator of pain.

Neutrophils and macrophages, both of which are phagocytes, are an important part of the inflammatory response. Neutrophils predominate in acute pyogenic infections, whereas macrophages are more prevalent in chronic or granulomatous infections. Macrophages perform two functions: they are phagocytic and they produce two important “proinflammatory” cytokines: tumor necrosis factor (TNF) and interleukin-1 (IL-1). The synthesis of IL-1 from its inactive precursor is mediated by proteolytic enzymes (caspases) in a cytoplasmic structure called an inflammasome. The importance of the inflammatory response in limiting infection is emphasized by the ability of anti-inflammatory agents such as corticosteroids to lower resistance to infection.

Certain proteins, known collectively as the acute-phase response, are also produced early in inflammation, mainly by the liver. The best known of these are C-reactive protein and mannose-binding protein, which bind to the surface of bacteria and enhance the activation of the alternative pathway of complement (see Chapter 58). C-reactive protein was named for its ability to bind with a carbohydrate in the cell wall of Streptococcus pneumoniae (see page 123). Lipopolysaccharide (endotoxin)-binding protein is another important acute-phase protein that is produced in response to gram-negative bacteria. Interleukin-6 (IL-6) is the main inducer of the acute-phase response and is also a proinflammatory cytokine. Macrophages are the principal source of IL-6, but many other types of cells produce it as well. Gamma interferon, which activates macrophages and enhances their microbicidal action, is produced by activated helper T cells.

As part of the inflammatory response, bacteria are engulfed (phagocytized) by polymorphonuclear neutrophils (PMNs) and macrophages. PMNs make up approximately 60% of the leukocytes in the blood, and their numbers increase significantly during infection (leukocytosis). It should be noted, however, that in certain bacterial infections such as typhoid fever, a decrease in the number of leukocytes (leukopenia) is found. The increase in PMNs is due to the production of granulocyte-stimulating factors (granulocyte colony-stimulating factor [G-CSF] and granulocyte-macrophage colony-stimulating factor [GM-CSF]; see Chapter 58) by macrophages soon after infection.

Note that although both PMNs and macrophages phagocytose bacteria, PMNs do not present antigen to helper T lymphocytes, whereas macrophages (and dendritic cells) do (see Chapter 58). Dendritic cells are the most important antigen-presenting cells. The phagocytic ability of dendritic cells is enhanced by the presence of receptors for mannose-binding protein.

The process of phagocytosis can be divided into three steps: migration, ingestion, and killing. Migration of PMNs to the infection site is due to the production of chemokines, such as interleukin-8 and complement component C5a, at that location. Adhesion of PMNs to the endothelium at the site of infection is mediated first by the interaction of the PMNs with selectin proteins on the endothelium and then by the interaction of integrin proteins called “LFA proteins,” located on the PMN surface, with intracellular adhesion molecule (ICAM) proteins on the endothelial cell surface.1

ICAM proteins on the endothelium are increased by inflammatory mediators, such as IL-1 and TNF (see Chapter 58), which are produced by macrophages in response to the presence of bacteria. The increase in the level of ICAM proteins ensures that PMNs selectively adhere to the site of infection. Increased permeability of capillaries as a result of histamine, kinins, and prostaglandins2 allows PMNs to migrate through the capillary wall to reach the bacteria. This migration is called diapedesis and takes several minutes to occur.

The bacteria are ingested by the invagination of the PMN cell membrane around the bacteria to form a vacuole (phagosome). This engulfment is enhanced by the binding of immunoglobulin G (IgG) antibodies (opsonins) to the surface of the bacteria, a process called opsonization (Figure 8–3). The C3b component of complement enhances opsonization. (The outer cell membranes of both PMNs and macrophages have receptors both for the Fc portion of IgG and for C3b.) Even in the absence of antibody, the C3b component of complement, which can be generated by the “alternative” pathway, can opsonize. This is particularly important for bacterial and fungal organisms whose polysaccharides activate the alternative pathway.

At the time of engulfment, a new metabolic pathway, known as the respiratory burst, is triggered; this results in the production of two microbicidal agents, the superoxide radical and hydrogen peroxide. These highly reactive compounds (often called reactive oxygen intermediates) are synthesized by the following reactions:

Nitric oxide (NO) is another important microbicidal agent. It is a reactive nitrogen intermediate that is synthesized by an inducible enzyme called nitric oxide synthase in response to stimulators such as endotoxin. Overproduction of NO contributes to the hypotension seen in septic shock because it causes vasodilation of peripheral blood vessels.

The respiratory burst also results in the production of the microbicidal agent–NO. NO contains a free radical that participates in oxidative killing of ingested microbes phagocytosed by neutrophils and macrophages. Nitric oxide synthase, the enzyme that produces NO, is induced in these cells following phagocytosis.

The killing of the organism within the phagosome is a two-step process that consists of degranulation followed by production of hypochlorite ions, which are probably the most important microbicidal agents. In degranulation, the two types of granules in the cytoplasm of the neutrophil fuse with the phagosome, emptying their contents in the process. These granules are lysosomes that contain a variety of enzymes essential to the killing and degradation that occur within the phagolysosome.

(1) The larger lysosomal granules, which constitute about 15% of the total, contain the important enzyme myeloperoxidase as well as lysozyme and several other degradative enzymes. (Myeloperoxidase, which is green, makes a major contribution to the color of pus.)

(2) The smaller granules, which make up the remaining 85%, contain lactoferrin and additional degradative enzymes such as proteases, nucleases, and lipases. Lysosomal granules can empty into the extracellular space as well as into the phagosome. Outside the cell, the degradative enzymes can attack structures too large to be phagocytized, such as fungal mycelia, as well as extracellular bacteria.

The actual killing of the microorganisms occurs by a variety of mechanisms, which fall into two categories: oxygen-dependent and oxygen-independent. The most important oxygen-dependent mechanism is the production of the bactericidal molecule, hypochlorite ion, according to the following reaction:

Myeloperoxidase catalyzes the reaction between chloride ion and hydrogen peroxide, which was produced by the respiratory burst, to produce hypochlorite ion in the presence of myeloperoxidase. Hypochlorite by itself damages cell walls but can also react with hydrogen peroxide to produce singlet oxygen, which damages cells by reacting with double bonds in the fatty acids of membrane lipids.

The oxygen-independent mechanisms are important under anaerobic conditions. These mechanisms involve lactoferrin, which chelates iron from the bacteria; lysozyme, which degrades peptidoglycan in the bacterial cell wall; cationic proteins, which damage bacterial membranes; and low pH.

Macrophages also migrate, engulf, and kill bacteria by using essentially the same processes as PMNs do, but there are several differences:

(1) Macrophages do not possess myeloperoxidase and so cannot make hypochlorite ion; however, they do produce hydrogen peroxide and superoxide by respiratory burst.

(2) Certain organisms such as the agents of tuberculosis, brucellosis, and toxoplasmosis are preferentially ingested by macrophages rather than PMNs and may remain viable and multiply within these cells; granulomas formed during these infections contain many of these macrophages.

The importance of phagocytosis as a host defense mechanism is emphasized by the observation that reduced numbers or reduced function of phagocytes predisposes to bacterial infections, especially infections caused by certain organisms (Table 8–2):