Hepatitis A Virus (HAV)

Many viruses cause hepatitis. Of these, five medically important viruses are commonly described as “hepatitis viruses” because their main site of infection is the liver. These five are hepatitis A virus (HAV), hepatitis B virus (HBV), hepatitis C virus (HCV), hepatitis D virus (HDV, delta virus), and hepatitis E virus (HEV) (Tables 41–1 and 41–2). Other viruses, such as Epstein–Barr virus (the cause of infectious mononucleosis), cytomegalovirus, and yellow fever virus, infect the liver but also infect other sites in the body and therefore are not exclusively hepatitis viruses. They are discussed elsewhere.

TABLE 41–1 Glossary of Hepatitis Viruses and Their Serologic Markers

HEPATITIS A VIRUS (HAV)

HAV causes hepatitis A.

HAV is a typical enterovirus classified in the picornavirus family. It has a single-stranded RNA genome and a nonenveloped icosahedral nucleocapsid and replicates in the cytoplasm of the cell. It is also known as enterovirus 72. It has one serotype, and there is no antigenic relationship to HBV or other hepatitis viruses.

HAV is transmitted by the fecal–oral route. Humans are the reservoir for HAV. Virus appears in the feces roughly 2 weeks before the appearance of symptoms, so quarantine of patients is ineffective. Children are the most frequently infected group, and outbreaks occur in special living situations such as summer camps and boarding schools. Common-source outbreaks arise from fecally contaminated water or food such as oysters grown in polluted water and eaten raw. Unlike HBV, HAV is rarely transmitted via the blood, because the level of viremia is low and chronic infection does not occur. About 50% to 75% of adults in the United States have been infected, as evidenced IgG antibody.

The pathogenesis of HAV infection is not completely understood. The virus probably replicates in the gastrointestinal tract and spreads to the liver via the blood. Hepatocytes are infected, but the mechanism by which cell damage occurs is unclear. HAV infection of cultured cells produces no cytopathic effect. It is likely that attack by cytotoxic T cells causes the damage to the hepatocytes. The infection is cleared, the damage is repaired, and no chronic infection ensues. Hepatitis caused by the different viruses cannot be distinguished pathologically.

The immune response consists initially of IgM antibody, which is detectable at the time jaundice appears. It is therefore important in the laboratory diagnosis of hepatitis A. The appearance of IgM is followed 1 to 3 weeks later by the production of IgG antibody, which provides lifelong protection.

The clinical manifestations of hepatitis are virtually the same, regardless of which hepatitis virus is the cause (Table 41–3). Fever, anorexia, nausea, vomiting, and jaundice are typical. Dark urine, pale feces, and elevated transaminase levels are seen. Most cases resolve spontaneously in 2 to 4 weeks. Hepatitis A has a short incubation period (3–4 weeks) in contrast to that of hepatitis B, which is 10 to 12 weeks. Most HAV infections are asymptomatic and are detected solely by the presence of IgG antibody. No chronic hepatitis or chronic carrier state occurs, and there is no predisposition to hepatocellular carcinoma.

The detection of IgM antibody is the most important test. A fourfold rise in IgG antibody titer can also be used. Isolation of the virus in cell culture is possible but not available in the clinical laboratory.

No antiviral therapy is available. Active immunization with a vaccine containing inactivated HAV is available. The virus is grown in human cell culture and inactivated with formalin. Two doses, an initial dose followed by a booster 6 to 12 months later, should be given. No subsequent booster dose is recommended. The vaccine is recommended for travelers to developing countries, for children ages 2 to 18 years, and for men who have sex with men. If an unimmunized person must travel to an endemic area within 4 weeks, then passive immunization (see later) should be given to provide immediate protection and the vaccine given to provide long-term protection. This is an example of passive–active immunization.

Because many adults have antibodies to HAV, it may be cost-effective to determine whether antibodies are present before giving the vaccine. The vaccine is also effective in postexposure prophylaxis if given within 2 weeks of exposure. A combination vaccine that immunizes against both HAV and HBV called Twinrix is available. Twinrix contains the same immunogens as the individual HAV and HBV vaccines.

Passive immunization with immune serum globulin prior to infection or within 14 days after exposure can prevent or mitigate the disease. Observation of proper hygiene (e.g., sewage disposal and handwashing after bowel movements) is of prime importance.

HBV is a member of the hepadnavirus family. It is a 42-nm enveloped virion,1 with an icosahedral nucleocapsid core containing a partially double-stranded circular DNA genome (Figure 41–1 and Table 41–2). 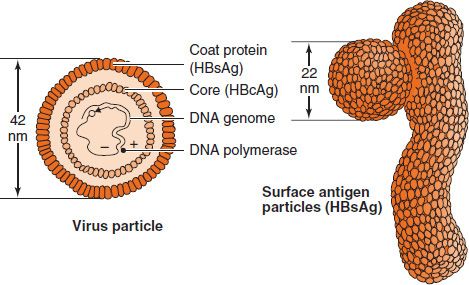 FIGURE 41–1 Hepatitis B virus (HBV). Left: Cross-section of the HBV virion. Right: The 22-nm spheres and filaments composed only of hepatitis B surface antigen. Because there is no viral DNA in the spheres and filaments, they are not infectious. (Modified and reproduced with permission from Ryan K et al. Sherris Medical Microbiology. 3rd ed. Originally published by Appleton & Lange. Copyright 1994 McGraw-Hill.)

The envelope contains a protein called the surface antigen (HBsAg), which is important for laboratory diagnosis and immunization.2

Electron microscopy of a patient’s serum reveals three different types of particles: a few 42-nm virions and many 22-nm spheres and long filaments 22 nm wide, which are composed of surface antigen (Figure 41–2). HBV is the only human virus that produces these spheres and filaments in such large numbers in the patient’s blood. The ratio of filaments and small spheres to virions is 1000:1. 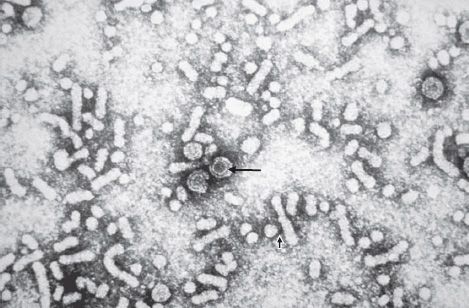 For vaccine purposes, HBV has one serotype based on HBsAg. However, for epidemiologic purposes, there are four serologic subtypes of HBsAg based on a group-specific antigen, “a,” and two sets of mutually exclusive epitopes, d or y and w or r. This leads to four serotypes—adw, adr, ayw, and ayr—which are useful in epidemiologic studies because they are concentrated in certain geographic areas.

The specificity of HBV for liver cells is based on two properties: virus-specific receptors located on the hepatocyte cell membrane (facilitate entry) and transcription factors found only in the hepatocyte that enhance viral mRNA synthesis (act postentry).

Humans are the only natural hosts of HBV. There is no animal reservoir.

After entry of the virion into the cell and its uncoating, the virion DNA polymerase synthesizes the missing portion of DNA, and a double-stranded closed-circular DNA is formed in the nucleus. This DNA serves as a template for mRNA synthesis by cellular RNA polymerase. After the individual mRNAs are made, a full-length positive-strand transcript is made, which is the template for the minus strand of the progeny DNA. The minus strand then serves as the template for the plus strand of the genome DNA. This RNA-dependent DNA synthesis catalyzed by reverse transcriptase encoded by HBV takes place within the newly assembled virion core in the cytoplasm. The RNA-dependent DNA synthesis that produces the genome and the DNA-dependent DNA synthesis that fills in the missing portion of DNA soon after infection of the next cell are carried out by the same enzyme (i.e., the HBV genome encodes only one polymerase).

Hepadnaviruses are the only viruses that produce genome DNA by reverse transcription with mRNA as the template. (Note that this type of RNA-dependent DNA synthesis is similar to but different from the process in retroviruses, in which the genome RNA is transcribed into a DNA intermediate.) Some of the progeny DNA integrates into the host cell genome, and this seems likely to be the DNA that maintains the carrier state. Progeny HBV with its HBsAg-containing envelope is released from the cell by budding through the cell membrane.

The three main modes of transmission are via blood, during sexual intercourse, and perinatally from mother to newborn. The observation that needle-stick injuries can transmit the virus indicates that only very small amounts of blood are necessary. HBV infection is especially prevalent in addicts who use intravenous drugs. Screening of blood for the presence of HBsAg has greatly decreased the number of transfusion-associated cases of hepatitis B.3

However, because blood transfusion is a modern procedure, there must be another, natural route of transmission. HBV is found in semen and vaginal fluids, so it is likely that sexual transmission is important. Transmission from mother to child during birth is another important natural route. Transplacental transmission, if it occurs, is rare. There is no evidence that transmission of HBV occurs during breast feeding.

Hepatitis B is found worldwide but is particularly prevalent in Asia. Globally, more than 300 million people are chronically infected with HBV, and about 75% of them are Asian. There is a high incidence of hepatocellular carcinoma (hepatoma) in many Asian countries—a finding that indicates that HBV is a human tumor virus (see Chapter 43). Immunization against HBV has significantly reduced the incidence of hepatoma in children. It appears that the HBV vaccine is the first vaccine to prevent a human cancer.

After entering the blood, the virus infects hepatocytes, and viral antigens are displayed on the surface of the cells. Cytotoxic T cells mediate an immune attack against the viral antigens, and inflammation and necrosis occur. Immune attack against viral antigens on infected hepatocytes is mediated by cytotoxic T cells. The pathogenesis of hepatitis B is probably the result of this cell-mediated immune injury, because HBV itself does not cause a cytopathic effect. Antigen–antibody complexes cause some of the early symptoms (e.g., arthralgias, arthritis, and urticaria) and some of the complications in chronic hepatitis (e.g., glomerulonephritis, cryoglobulinemia, and vasculitis).

A high rate of hepatocellular carcinoma occurs in chronic carriers. The HBx gene may be an oncogene because the HBx protein inactivates the p53 tumor suppressor protein (see Chapter 43). In addition, hepatocellular carcinoma may be the result of persistent cellular regeneration that attempts to replace the dead hepatocytes. Alternatively, malignant transformation could be the result of insertional mutagenesis, which could occur when the HBV genome integrates into the hepatocyte DNA. Integration of the HBV DNA could activate a cellular oncogene, leading to a loss of growth control.

Chronic carriage is more likely to occur when infection occurs in a newborn than in an adult, probably because a newborn’s immune system is less competent than that of an adult’s. Approximately 90% of infected neonates become chronic carriers. Chronic carriage resulting from neonatal infection is associated with a high risk of hepatocellular carcinoma.

Patients coinfected with both HBV and human immunodeficiency virus (HIV) may have increased hepatic damage if HIV is treated prior to treating HBV. This occurs because the “immune reconstitution” that results when HIV is treated successfully leads to increased damage to the hepatocytes by the restored, competent cytotoxic T cells. For this reason, it is suggested that HBV be treated prior to treating HIV.

The two most important serologic tests for the diagnosis of early hepatitis B are the tests for HBsAg and for IgM antibody to the core antigen. Both appear in the serum early in the disease. HBsAg appears during the incubation period and is detectable in most patients during the prodrome and acute disease (Figure 41–3). It falls to undetectable levels during convalescence in most cases; its prolonged presence (at least 6 months) indicates the carrier state and the risk of chronic hepatitis and hepatic carcinoma. As described in Table 41–4, HBsAb is not detectable in the chronic carrier state. Note that HBsAb is, in fact, being made but is not detectable in the laboratory tests because it is bound to the large amount of HBsAg present in the blood. HBsAb is also being made during the acute disease but is similarly undetectable because it is bound in antigen–antibody complexes. 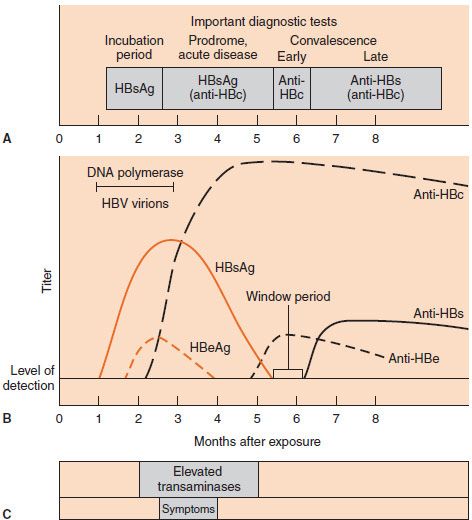