The doubling (generation) time of bacteria ranges from as little as 20 minutes for Escherichia coli to as long as 18 hours for Mycobacterium tuberculosis. The exponential growth and the short doubling time of some organisms result in rapid production of very large numbers of bacteria. For example, 1 E. coli organism will produce over 1000 progeny in about 3 hours and over 1 million in about 7 hours. The doubling time varies not only with the species, but also with the amount of nutrients, the temperature, the pH, and other environmental factors.

The growth cycle of bacteria has four major phases. If a small number of bacteria are inoculated into a liquid nutrient medium and the bacteria are counted at frequent intervals, the typical phases of a standard growth curve can be demonstrated (Figure 3–1). 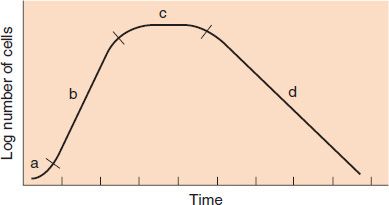 (1) The first is the lag phase, during which vigorous metabolic activity occurs but cells do not divide. This can last for a few minutes up to many hours.

(2) The log (logarithmic) phase is when rapid cell division occurs. β-Lactam drugs, such as penicillin, act during this phase because the drugs are effective when cells are making peptidoglycan (i.e., when they are dividing). The log phase is also known as the exponential phase.

(3) The stationary phase occurs when nutrient depletion or toxic products cause growth to slow until the number of new cells produced balances the number of cells that die, resulting in a steady state. Cells grown in a special apparatus called a “chemostat,” into which fresh nutrients are added and from which waste products are removed continuously, can remain in the log phase and do not enter the stationary phase.

(4) The final phase is the death phase, which is marked by a decline in the number of viable bacteria.

For most organisms, an adequate supply of oxygen enhances metabolism and growth. The oxygen acts as the hydrogen acceptor in the final steps of energy production catalyzed by the flavoproteins and cytochromes. Because the use of oxygen generates two toxic molecules, hydrogen peroxide (H2O2) and the free radical superoxide (O2), bacteria require two enzymes to utilize oxygen. The first is superoxide dismutase, which catalyzes the reaction

and the second is catalase, which catalyzes the reaction

The response to oxygen is an important criterion for classifying bacteria and has great practical significance because specimens from patients must be incubated in a proper atmosphere for the bacteria to grow.

(1) Some bacteria, such as M. tuberculosis, are obligate aerobes; that is, they require oxygen to grow because their ATP-generating system is dependent on oxygen as the hydrogen acceptor.

(2) Other bacteria, such as E. coli, are facultative anaerobes; they utilize oxygen, if it is present, to generate energy by respiration, but they can use the fermentation pathway to synthesize ATP in the absence of sufficient oxygen.

(3) The third group of bacteria consists of the obligate anaerobes, such as Clostridium tetani, which cannot grow in the presence of oxygen because they lack either superoxide dismutase or catalase, or both. Obligate anaerobes vary in their response to oxygen exposure; some can survive but are not able to grow, whereas others are killed rapidly.

The term fermentation refers to the breakdown of a sugar (such as glucose or maltose) to pyruvic acid and then, usually, to lactic acid. (More specifically, it is the breakdown of a monosaccharide such as glucose, maltose, or galactose. Note that lactose is a disaccharide composed of glucose and galactose and therefore must be cleaved by β-galactosidase in E. coli before fermentation can occur.) Fermentation is also called the glycolytic (glyco = sugar, lytic = breakdown) cycle, and this is the process by which facultative bacteria generate ATP in the absence of oxygen.

If oxygen is present, the pyruvate produced by fermentation enters the Krebs cycle (oxidation cycle, tricarboxylic acid cycle) and is metabolized to two final products, CO2 and H2O. The Krebs cycle generates much more ATP than the glycolytic cycle; therefore, facultative bacteria grow faster in the presence of oxygen. Facultative and anaerobic bacteria ferment, but aerobes, which can grow only in the presence of oxygen, do not. Aerobes, such as Pseudomonas aeruginosa, produce metabolites that enter the Krebs cycle by processes other than fermentation, such as the deamination of amino acids.

In fermentation tests performed in the clinical laboratory, the production of pyruvate and lactate turns the medium acid, which can be detected by a pH indicator that changes color upon changes in pH. For example, if a sugar is fermented in the presence of phenol red (an indicator), the pH becomes acidic and the medium turns yellow. If, however, the sugar is not fermented, no acid is produced and the phenol red remains red.

Iron, in the form of ferric ion, is required for the growth of bacteria because it is an essential component of cytochromes and other enzymes. The amount of iron available for pathogenic bacteria in the human body is very low because the iron is sequestered in iron-binding proteins such as transferrin. To obtain iron for their growth, bacteria produce iron-binding compounds called siderophores. Siderophores, such as enterobactin produced by E. coli, are secreted by the bacteria, capture iron by chelating it, then attach to specific receptors on the bacterial surface, and are actively transported into the cell where the iron becomes available for use. The fact that bacteria have such a complex and specific mechanism for obtaining iron testifies to its importance in the growth and metabolism of bacteria.

Tags: Review of Medical Microbiology and Immunology 13e
Jan 26, 2017 | Posted by admin in MICROBIOLOGY | Comments Off on Growth
Premium Wordpress Themes by UFO Themes
WordPress theme by UFO themes
%d bloggers like this: