Acetylcholine (ACh) is the substance that transmits nerve impulses across the parasympathetic branch of the autonomic nervous system. There are two types of receptors in the parasympathetic nervous branch: muscarinic receptors (which stimulate smooth muscle) and nicotinic receptors (which stimulate skeletal muscle). Stimulation of this pathway results in the opposite reactions to those triggered by the adrenergic system: blood vessels dilate, sending blood to the gastrointestinal (GI) tract; secretions and peristalsis are activated and salivary glands increase production; the heart slows and pulmonary bronchioles constrict; the smooth muscle of the bladder contracts and the pupils of the eyes constrict (Fig. 26.1). Activation of these nerves is sometimes called the rest-and-digest response.

Mr. Park is in the perioperative area, having just been given his preoperative medications for hip surgery. He is very concerned about the function of his bladder and bowels, because after falling in the garden he was unable to get up to urinate and needed to be straight-catheterized in the emergency room. Mr. Park is fearful that the surgery will lead to more retention issues and another infection, this time in his bladder. 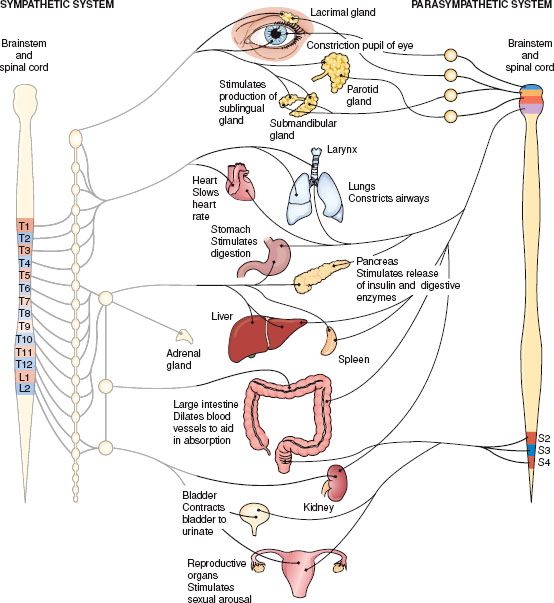 Cholinergic drugs that act like the neurotransmitter ACh are called direct-acting cholinergics. The parasympathetic branch of the autonomic nervous system partly controls the process of micturition (voiding of urine) by constricting the detrusor muscle and relaxing the bladder sphincter (see Fig. 26.1). Micturition is both a voluntary and an involuntary act. Urinary retention (not caused by a mechanical obstruction, such as a stone in the bladder) results when micturition is impaired. Treatment of urinary retention with direct-acting cholinergic drugs causes contraction of the bladder smooth muscles and passage of urine.

Myasthenia gravis is a disease that involves rapid fatigue of skeletal muscles because of the lack of ACh released at the nerve endings of parasympathetic nerves. Cholinergic drugs that prolong the activity of ACh by inhibiting the release of AChE are called indirect-acting cholinergics or anticholinesterase muscle stimulants. Drugs used to treat this disorder act indirectly to inhibit the activity of AChE and promote muscle contraction.

Treatment of glaucoma with an indirect-acting cholinergic drug produces miosis (constriction of the iris). Although used for many years, these drugs are rarely used today due to frequency of dosing and side effects experienced. See the Summary Drug Table: Cholinergic Drugs for a more complete listing of these drugs.

Major uses of the cholinergic drugs are in the treatment of the following:

Topical administration usually produces few adverse effects, but a temporary reduction of visual acuity (sharpness) and headache may occur. With the exception of those applied topically, cholinergic drugs are not selective in action. General adverse reactions include the following:

•  Flushing of the skin

These drugs are contraindicated in patients with known hypersensitivity to the drugs, asthma, peptic ulcer disease, coronary artery disease, and hyperthyroidism. Bethanechol is contraindicated in those with mechanical obstruction of the GI or genitourinary tracts. Patients with secondary glaucoma, iritis, corneal abrasion, or any acute inflammatory disease of the eye should not use the ophthalmic cholinergic preparations.

These drugs are used cautiously in patients with hypertension, epilepsy, cardiac arrhythmias, bradycardia, recent coronary occlusion, and megacolon. The safety of these drugs has not been established for use during pregnancy (pregnancy category C) or lactation, or in children.

The following interactions may occur when a cholinergic drug is administered with another agent:

URINARY RETENTION. If a patient receives a cholinergic drug for the treatment of urinary retention, palpate the abdomen in the pelvic area and scan the bladder to determine if urine retention is present. A rounded swelling over the pelvis usually indicates retention and a distended bladder. The patient may also complain of discomfort in the lower abdomen. In addition, take and document the patient’s blood pressure and pulse rate.

MYASTHENIA GRAVIS. Before giving a cholinergic drug to a patient with myasthenia gravis, the primary health care provider performs a complete neurologic assessment. Assessment is made for signs of muscle weakness, such as drooling (i.e., the lack of ability to swallow), inability to chew and swallow, drooping of the eyelids, inability to perform repetitive movements (e.g., walking, combing hair, using eating utensils), difficulty breathing, and extreme fatigue.

While the patient is receiving a cholinergic drug, it is important to monitor for drug toxicity or cholinergic crisis.