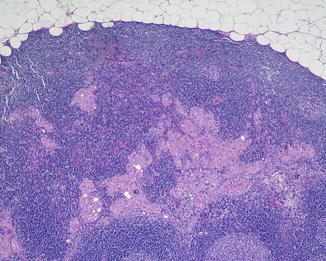 Immunohistochemistry may be very helpful when examining SLN. As with melanomas at other anatomic sites, use of a panel of antibodies directed at various melanoma-associated antigens (usually a combination of anti-MART1, HMB45, and anti-tyrosinase) (Fig. 17.3) helps detecting melanoma cells. As mentioned in Chap. 4, S-100 protein is a very sensitive but relatively nonspecific marker for melanocytic tumors including melanoma (since there are S100+ dendritic cells in lymph nodes). The antigen gp100 (detected with HMB-45 antibody) is very specific but is less sensitive (~75 %) than S-100; on the other hand, gp100 is usually not expressed in most benign melanocytic lesions including nodal nevi (see below). Tyrosinase has value similar to gp100. MART-1/ Melan-A expression is both very specific and very sensitive for melanocyte-lineage cells (although it can occur also in macrophages, especially when DAB chromogen is utilized). Microphthalmia transcription factor (MiTF) and SOX10 are relatively recent melanocyte markers with good sensitivity and specificity, and the quite useful property of nuclear localization, permitting assessment of nuclear size and of coexpression with cytoplasmic markers such as gp100. 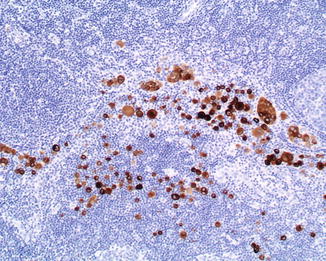 Melanoma metastatic to a lymph node highlighted by an immunohistochemical cocktail against melanocytic markers (anti-MART1, HMB45, and anti-tyrosinase; diaminobencidine; hematoxylin as counterstain)
Pitfalls in the application of IHC to melanoma SLN biopsy include the occurrence of spindle-cell forms of melanoma, which characteristically are strongly S100+ but usually lack consistent expression of the more sensitive markers such as gp100 and MART-1. For such cases we recommend anti-SOX10 [6]. Other hazards include the presence of intranodal pigment (include melanin and exogenous substances) that may be mistaken for veritable IHC chromogen, and the occurrence of necrosis, which may cause misleading IHC results.
To help distinguish between macrophages and melanoma cells, since MART1 can be expressed by macrophages [7], we use HMB45 by itself or anti-SOX10 (HMB45 or anti-SOX10 usually do not label macrophages). Our approach is to first examine the anti-melanocytic cocktail (anti-MART1, HMB45, and anti-tyrosinase). If there are cells in which morphology does not clearly distinguish between melanoma and macrophages we then do an HMB45 or anti-SOX10 (both usually negative in melanoma) (Fig 17.4).

Sentinel lymph with a single cell in the subcapsular area labeled with the anti-melanocytic cocktail (a). By morphologic features alone it is difficult to determine if this cell is a melanoma cell or a macrophage. After removing the coverslip, this cell is negative for SOX10 (nuclear marker) (b), thus supporting the interpretation of being a macrophage and not a melanoma cell. The cytoplasmic labeling seen in b is the leftover of the anti0melanocytic cocktail after de-coversliping the slide and relabel it with anti-SOX10
A potentially vexing phenomenon is the nodal nevus. Benign melanocytes are detectable in up to 20 % of lymphadenectomies performed for melanoma. To complicate things further, they are more common in cases where the primary melanoma was associated with a nevus [8]. The location of melanocytes in the node is a critical consideration; most nevi are situated within the capsule (Fig. 17.5) (although rare cases of intraparenchymal nodal nevi do occur); in contrast, melanoma characteristically affects the subcapsular sinus and node parenchyma, and true capsular involvement by melanoma usually occurs as extension from an obvious parenchymal metastasis.