Because fungi (yeasts and molds) are eukaryotic organisms, whereas bacteria are prokaryotic, they differ in several fundamental respects (Table 47–1). Two fungal cell structures are important medically:

TABLE 47–1 Comparison of Fungi and Bacteria

(1) The fungal cell wall consists primarily of chitin (not peptidoglycan as in bacteria); thus fungi are insensitive to antibiotics, such as penicillin, that inhibit peptidoglycan synthesis.

Chitin is a polysaccharide composed of long chains of N-acetylglucosamine. The fungal cell wall contains other polysaccharides as well, the most important of which is β-glucan, a long polymer of D-glucose. The medical importance of β-glucan is that it is the site of action of the antifungal drug caspofungin.

(2) The fungal cell membrane contains ergosterol, in contrast to the human cell membrane, which contains cholesterol. The selective action of amphotericin B and azole drugs, such as fluconazole and ketoconazole, on fungi is based on this difference in membrane sterols.

There are two types of fungi: yeasts and molds. Yeasts grow as single cells that reproduce by asexual budding. Molds grow as long filaments (hyphae) and form a mat (mycelium). Some hyphae form transverse walls (septate hyphae), whereas others do not (nonseptate hyphae). Nonseptate hyphae are multinucleated (coenocytic). The growth of hyphae occurs by extension of the tip of the hypha, not by cell division all along the filament.

Several medically important fungi are thermally dimorphic (i.e., they form different structures at different temperatures). They exist as molds in the environment at ambient temperature and as yeasts (or other structures) in human tissues at body temperature.

Most fungi are obligate aerobes; some are facultative anaerobes; but none are obligate anaerobes. All fungi require a preformed organic source of carbon—hence their frequent association with decaying matter. The natural habitat of most fungi is, therefore, the environment. An important exception is Candida albicans, which is part of the normal human flora.

Most fungi of medical interest propagate asexually by forming conidia (asexual spores) from the sides or ends of specialized structures (Figure 47–1). The shape, color, and arrangement of conidia aid in the identification of fungi. Some important conidia are (1) arthrospores,1 which arise by fragmentation of the ends of hyphae and are the mode of transmission of Coccidioides immitis; (2) chlamydospores, which are rounded, thick-walled, and quite resistant (the terminal chlamydospores of C. albicans aid in its identification); (3) blastospores, which are formed by the budding process by which yeasts reproduce asexually (some yeasts, e.g., C. albicans, can form multiple buds that do not detach, thus producing sausagelike chains called pseudohyphae, which can be used for identification); and (4) sporangiospores, which are formed within a sac (sporangium) on a stalk by molds such as Rhizopus and Mucor. 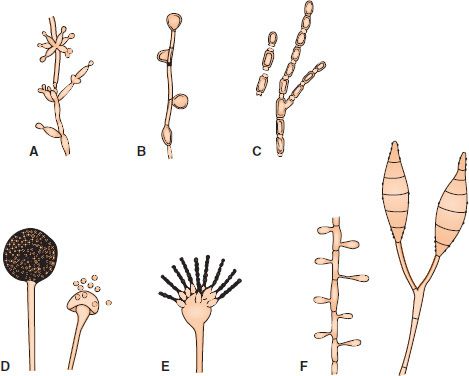 Although this book focuses on the fungi that are human pathogens, it should be remembered that fungi are used in the production of important foods (e.g., bread, cheese, wine, and beer). Fungi are also responsible for the spoilage of certain foods. Because molds can grow in a drier, more acidic, and higher osmotic pressure environment than bacteria, they tend to be involved in the spoilage of fruits, grains, vegetables, and jams.

The response to infection with many fungi is the formation of granulomas. Granulomas are produced in the major systemic fungal diseases (e.g., coccidioidomycosis, histoplasmosis, and blastomycosis, as well as several others). The cell-mediated immune response is involved in granuloma formation. Acute suppuration, characterized by the presence of neutrophils in the exudate, also occurs in certain fungal diseases such as aspergillosis and sporotrichosis. Fungi do not have endotoxin in their cell walls and do not produce bacterial-type exotoxins.

Activation of the cell-mediated immune system results in a delayed hypersensitivity skin test response to certain fungal antigens injected intradermally. A positive skin test indicates exposure to the fungal antigen. It does not imply current infection, because the exposure may have occurred in the past. A negative skin test makes the diagnosis unlikely unless the patient is immunocompromised. Because most people carry Candida as part of the normal flora, skin testing with Candida antigens can be used to determine whether cell-mediated immunity is normal.

The transmission and geographic locations of some important fungi are described in Table 47–2.

TABLE 47–2 Transmission and Geographic Location of Some Important Fungi

Intact skin is an effective host defense against certain fungi (e.g., Candida, dermatophytes), but if the skin is damaged, organisms can become established. Fatty acids in the skin inhibit dermatophyte growth, and hormone-associated skin changes at puberty limit ringworm of the scalp caused by Trichophyton. The normal flora of the skin and mucous membranes suppress fungi. When the normal flora is inhibited (e.g., by antibiotics), overgrowth of fungi such as C. albicans can occur.

In the respiratory tract, the important host defenses are the mucous membranes of the nasopharynx, which trap inhaled fungal spores, and alveolar macrophages. Circulating IgG and IgM are produced in response to fungal infection, but their role in protection from disease is uncertain. The cell-mediated immune response is protective; its suppression can lead to reactivation and dissemination of asymptomatic fungal infections and to disease caused by opportunistic fungi.

In addition to mycotic infections, there are two other kinds of fungal disease: (1) mycotoxicoses, caused by ingested toxins, and (2) allergies to fungal spores. The best-known mycotoxicosis occurs after eating Amanita mushrooms. These fungi produce five toxins, two of which—amanitin and phalloidin—are among the most potent hepatotoxins. The toxicity of amanitin is based on its ability to inhibit cellular RNA polymerase, which prevents mRNA synthesis. Another mycotoxicosis, ergotism, is caused by the mold Claviceps purpurea, which infects grains and produces alkaloids (e.g., ergotamine and lysergic acid diethylamide [LSD]) that cause pronounced vascular and neurologic effects.

Other ingested toxins, aflatoxins, are coumarin derivatives produced by Aspergillus flavus that cause liver damage and tumors in animals and are suspected of causing hepatic carcinoma in humans. Aflatoxins are ingested with spoiled grains and peanuts and are metabolized by the liver to the epoxide, a potent carcinogen. Aflatoxin B1 induces a mutation in the p53 tumor suppressor gene, leading to a loss of p53 protein and a consequent loss of growth control in the hepatocyte.

Allergies to fungal spores, particularly those of Aspergillus, are manifested primarily by an asthmatic reaction (rapid bronchoconstriction mediated by IgE), eosinophilia, and a “wheal and flare” skin test reaction. These clinical findings are caused by an immediate hypersensitivity response to the fungal spores.

There are four approaches to the laboratory diagnosis of fungal diseases: (1) direct microscopic examination, (2) culture of the organism, (3) DNA probe tests, and (4) serologic tests. Direct microscopic examination of clinical specimens such as sputum, lung biopsy material, and skin scrapings depends on finding characteristic asexual spores, hyphae, or yeasts in the light microscope. The specimen is either treated with 10% potassium hydroxide (KOH) to dissolve tissue material, leaving the alkali-resistant fungi intact, or stained with special fungal stains. Some examples of diagnostically important findings made by direct examination are (1) the spherules of C. immitis and (2) the wide capsule of Cryptococcus neoformans seen in India ink preparations of spinal fluid. Calcofluor white is a fluorescent dye that binds to fungal cell walls and is useful in the identification of fungi in tissue specimens. Methenamine silver stain is also useful in the microscopic diagnosis of fungi in tissue.

Tests involving DNA probes can identify colonies growing in culture at an earlier stage of growth than can tests based on visual detection of the colonies. As a result, the diagnosis can be made more rapidly. At present, DNA probe tests are available for Coccidioides, Histoplasma, Blastomyces, and Cryptococcus.

Tests for the presence of antibodies in the patient’s serum or spinal fluid are useful in diagnosing systemic mycoses but less so in diagnosing other fungal infections. As is the case for bacterial and viral serologic testing, a significant rise in the antibody titer must be observed to confirm a diagnosis. The complement fixation test is most frequently used in suspected cases of coccidioidomycosis, histoplasmosis, and blastomycosis. In cryptococcal meningitis, the presence of the polysaccharide capsular antigens of C. neoformans in the spinal fluid can be detected by the latex agglutination test.

The drugs used to treat bacterial diseases have no effect on fungal diseases. For example, penicillins and aminoglycosides inhibit the growth of many bacteria but do not affect the growth of fungi. This difference is explained by the presence of certain structures in bacteria (e.g., peptidoglycan and 70S ribosomes) that are absent in fungi.