Bacterial diseases can be prevented by using immunizations that induce either active or passive immunity. Active immunity is induced by vaccines prepared from bacteria or their products. This chapter presents a summary of the types of vaccines (Table 12–1); detailed information regarding each vaccine is located in the chapters on the specific organisms. Passive immunity is provided by the administration of preformed antibody in preparations called immune globulins. The immune globulins useful against bacterial diseases are described later. Passive–active immunity involves giving both immune globulins to provide immediate protection and a vaccine to provide long-term protection. This approach is described later in the section on tetanus antitoxin.

Bacterial vaccines are composed of capsular polysaccharides, inactivated protein exotoxins (toxoids), killed bacteria, or live, attenuated bacteria. The available bacterial vaccines and their indications are described next. Table 12–2 lists the bacterial (and viral) vaccines recommended for children from 0 to 6 years of age as of 2011. 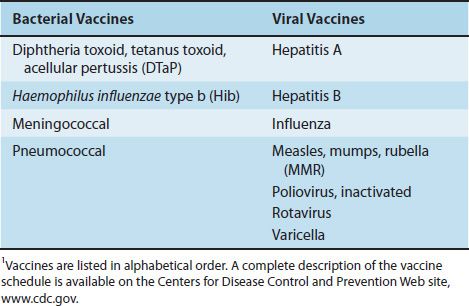 (1) Streptococcus pneumoniae vaccine contains the capsular polysaccharides of the 23 most prevalent serotypes. It is recommended for persons older than 60 years of age and patients of any age with such chronic diseases as diabetes and cirrhosis or with compromised spleen function or splenectomy. A second vaccine containing the capsular polysaccharide of 13 pneumococcal serotypes coupled to a carrier protein (diphtheria toxoid) is available for the protection of young children who do not respond well to the unconjugated vaccine. The function of the carrier protein is explained in Figure 57–5.

A potential problem regarding the use of the pneumococcal vaccine (or a vaccine against any organism with multiple serotypes) is that of serotype replacement. Will the vaccine reduce the incidence of disease caused by the serotypes in the vaccine but not the overall incidence of disease because other serotypes that are not in the vaccine will now cause disease? In fact, this occurred. An increase in invasive pneumococcal disease caused by serotype 19A, a serotype not in the previous vaccine, was observed. In view of this, serotype 19A is included in the current 13 serotype vaccine.

(2) Neisseria meningitidis vaccine contains capsular polysaccharide of four important types (A, C, W-135, and Y). Two forms of the vaccine are available: one contains the polysaccharides conjugated to a carrier protein (diphtheria toxoid), and the other contains only the polysaccharides. It is given when there is a high risk of meningitis (e.g., during an outbreak, when students enter college and are living in a dormitory, when military recruits enter boot camp, or for travelers to areas where meningitis is hyperendemic).

(3) Haemophilus influenzae vaccine contains the type b polysaccharide conjugated to diphtheria toxoid or other carrier protein. It is given to children between the ages of 2 and 15 months to prevent meningitis. The capsular polysaccharide alone is a poor immunogen in young children, but coupling it to a carrier protein greatly enhances its immunogenicity. A combined vaccine consisting of this vaccine plus the diphtheria, tetanus, and pertussis (DTP) vaccines is available.

(4) One of the vaccines against typhoid fever contains the capsular polysaccharide of Salmonella typhi. It is indicated for persons living or traveling in areas where there is a high risk of typhoid fever and for persons in close contact with either infected patients or chronic carriers.

(1) Corynebacterium diphtheriae vaccine contains the toxoid (formaldehyde-treated exotoxin). Immunization against diphtheria is indicated for every child and is given in three doses at 2, 4, and 6 months of age, with boosters given 1 year later and at intervals thereafter.

(2) Clostridium tetani vaccine contains tetanus toxoid and is given to everyone both early in life and later as boosters for protection against tetanus.

(3) Bordetella pertussis vaccine contains pertussis toxoid but includes other proteins as well. It is, therefore, described in the next section.

(1) There are two types of B. pertussis vaccines: an acellular vaccine containing purified proteins and a vaccine containing whole killed bacteria. The acellular vaccine is now recommended in the United States. The principal antigen in the acellular vaccine is inactivated pertussis toxin (pertussis toxoid), but other proteins, such as filamentous hemagglutinin and pertactin, are also required for full protection. Pertussis toxin for the vaccine is inactivated genetically by introducing two amino acid changes that eliminate its toxic (ADP-ribosylating) activity but retain its antigenicity. It is the first vaccine to contain a genetically inactivated toxoid. The vaccine is indicated for every child as a protection against whooping cough. It is usually given in combination with diphtheria and tetanus toxoids (DTP or DTaP vaccine).

(2) Bacillus anthracis vaccine contains “protective antigen” purified from the organism. It is given to persons whose occupations place them at risk of exposure to the organism.

(1) The vaccine against tuberculosis contains a live, attenuated strain of Mycobacterium bovis called BCG and, in some countries, is recommended for children at high risk for exposure to active tuberculosis.

(2) One of the vaccines against typhoid fever contains live, attenuated S. typhi. It is indicated for persons living or traveling in areas where there is a high risk of typhoid fever and for persons in close contact with either infected patients or chronic carriers.

(3) The vaccine against tularemia contains live, attenuated Francisella tularensis organisms and is used primarily in people who are exposed in their occupation, such as laboratory personnel, veterinarians, and hunters.

(1) Vibrio cholerae vaccine contains killed organisms and is given to persons traveling to areas where cholera is endemic.

(3) The vaccine against typhus contains killed Rickettsia rickettsiae organisms and is used primarily to immunize members of the armed forces.

(4) The vaccine against Q fever contains killed Coxiella burnetii organisms and is used to immunize those who are at high risk for being exposed to animals infected with the organism.

Antitoxins (immune globulins) can be used for either the treatment or prevention of certain bacterial diseases. The following preparations are available:

(2) Botulinum antitoxin is used in the treatment of botulism. Because the antitoxin can neutralize unbound toxin to prevent the disease from progressing, it should be given promptly. It contains antibodies against botulinum toxins A, B, and E, the most commonly occurring types. The antitoxin is made in horses, so hypersensitivity may be a problem.

(3) Diphtheria antitoxin is used in the treatment of diphtheria. The antitoxin can neutralize unbound toxin to prevent the disease from progressing; therefore, the antitoxin should be given promptly. The antitoxin is made in horses, so hypersensitivity may be a problem.