Lillian Chase has asked her primary health care provider to remove a mole on her arm. You are asked to draw up into a syringe the medication to numb the area. After reading this chapter, see if you can make the appropriate selection. 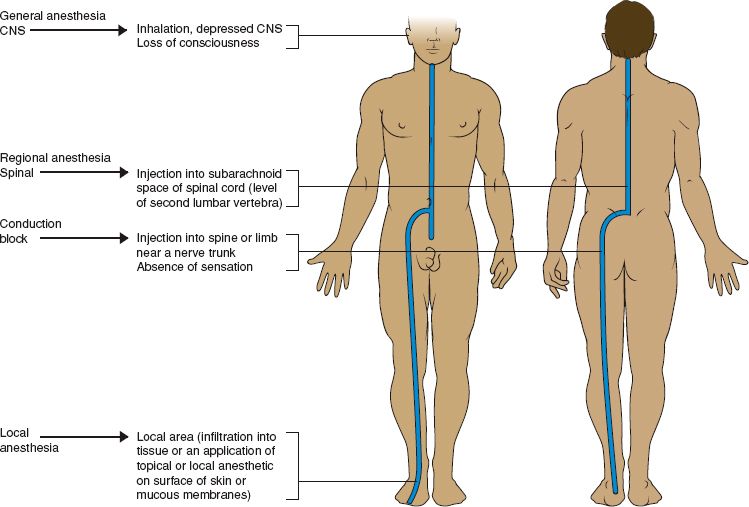 Figure 17.1 Sites and mechanisms of action of drugs used for anesthesia.

The various methods of administering a local anesthetic include topical application, local infiltration, and regional anesthesia.

Local infiltration anesthesia is the injection of a local anesthetic drug into tissues. This type of anesthesia may be used for dental procedures, the suturing of small wounds, or making an incision into a small area, such as that required for removing a superficial piece of tissue for biopsy.

Spinal anesthesia is a type of regional anesthesia that involves the injection of a local anesthetic drug into the subarachnoid space of the spinal cord, usually at the level of the second lumbar vertebra. There is a loss of feeling (anesthesia) and movement in the lower extremities, lower abdomen, and perineum.

The placement of the needle or a catheter requires strict aseptic technique by a skilled physician. Drug injected through the catheter spreads freely throughout the tissues in the space, interrupting pain conduction at the points where sensory nerve fibers exit from the spinal cord.

A catheter may be placed to give intermittent injections to maintain anesthesia over time such as the immediate postoperative period.

Preparing the Patient for Local Anesthesia

The physician or dentist administers a local injectable anesthetic. These drugs may be mixed with epinephrine to cause local vasoconstriction. The drug stays in the tissue longer when epinephrine is used. This is contraindicated, however, when the local anesthetic is used on an extremity. When preparing these medications, you should proceed cautiously and be aware of when epinephrine is to be used and when it should not be used. Table 17.1 lists the more commonly used local anesthetics.

When caring for a patient receiving local anesthesia, you may be responsible for applying a dressing to the surgical area if appropriate. Typically, when using local anesthesia, you will instruct the family or caregiver how to observe the area for bleeding, oozing, or other problems after the administration of the anesthetic and when to contact the primary health care provider. 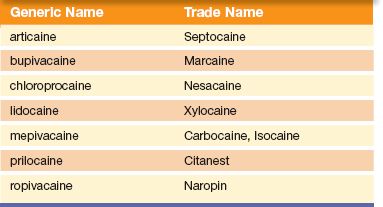 The general purpose, or use, of the preanesthetic drug is to prepare the patient for anesthesia. The more specific purposes of these drugs include the following:

•  Opioid or antianxiety drug—to decrease anxiety and apprehension immediately before surgery. The patient who is calm and relaxed can be anesthetized more quickly, usually requires a smaller dose of an induction drug, may require less anesthesia during surgery, and may have a smoother recovery from the anesthesia period (awakening from anesthesia).

•  Cholinergic blocking drug—to decrease secretions of the upper respiratory tract. Some anesthetic gases and volatile liquids are irritating to the lining of the respiratory tract and thereby increase mucous secretions. The cough and swallowing reflexes are lost during general anesthesia, and excessive secretions can pool in the lungs, resulting in pneumonia or atelectasis (lung collapse) during the postoperative period. The administration of a cholinergic blocking drug, such as glycopyrrolate (Robinul), dries up secretions of the upper respiratory tract and decreases the possibility of excessive mucus production.

Preanesthetic drugs may be omitted in patients who are 60 years or older because many of the medical disorders for which these drugs are contraindicated are seen in older individuals. For example, atropine and glycopyrrolate, drugs that can be used to decrease secretions of the upper respiratory tract, are contraindicated in certain medical disorders, such as prostatic hypertrophy, glaucoma, and myocardial ischemia. Other preanesthetic drugs that depress the CNS, such as opioids, barbiturates, and antianxiety drugs, with or without antiemetic properties, may be contraindicated in the older individual.

The preanesthetic drug is usually selected by the anesthesiologist and may consist of one or more drugs (Table 17.2). An opioid (see Chapter 16) or antianxiety drug (see Chapter 20) may be given to relax or sedate the patient. A cholinergic blocking drug (see Chapter 27) is given to dry secretions in the upper respiratory tract. Scopolamine and glycopyrrolate also have mild sedative properties, and atropine may or may not produce some sedation. Antianxiety drugs have sedative action; when combined with an opioid, they allow a lowering of the opioid dosage because they also have the ability to potentiate (increase the effect of) the sedative action of the opioid. Diazepam (Valium), an antianxiety drug, is one of the more commonly used drugs for preoperative sedation. 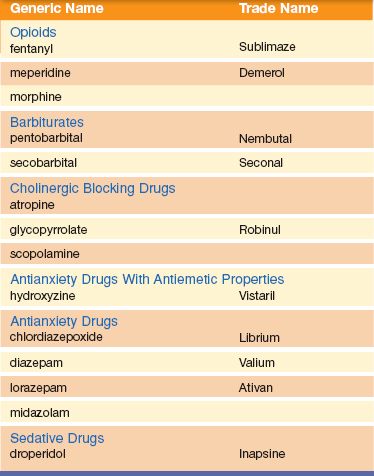 When caring for a patient receiving a preanesthetic drug, assess the patient’s physical status and give an explanation of the anesthesia. In some hospitals, the anesthesiologist examines the patient at an outpatient visit, a few days or a week before surgery, although this may not be possible in emergency situations. Some hospitals use operating room or postanesthesia care unit (PACU) staff members to visit the patient before surgery to explain certain facts, such as the time of surgery, the effects of the preanesthetic drug, preparations for surgery, and the PACU. Proper explanation of anesthesia, the surgery itself, and the events that may occur in preparation for surgery, as well as care after surgery, requires a team approach. As the nurse on the team, your responsibilities include the following:

•  Describe or explain immediate postoperative care, such as that given in the PACU (also called the recovery room) or a special postoperative surgical unit, and the activities of the health care team during this period. Explain that the patient’s vital signs will be monitored frequently and that other equipment, such as IV lines and fluids and hemodynamic (cardiac) monitors, may be used.

•  Emphasize the importance of pain control, and make sure the patient understands that relieving pain early on is better than trying to hold out, not take the medicine, and later attempt to relieve the pain. Teach the patient how to use the patient-controlled analgesia (PCA) pump.

•  Tailor the preoperative explanations to fit the type of surgery scheduled. Not all of these teaching points may require inclusion in every explanation.

•  Provide written instructions in the language of preference for the patient to take home and read to reinforce the teachings.

The administration of general anesthesia requires the use of one or more drugs. The choice of anesthetic drug depends on many factors, including:

•  General physical condition of the patient

•  Area, organ, or system being operated on

•  Anticipated length of the surgical procedure

Methohexital (Brevital), which is an ultrashort-acting barbiturate, is used for the following:

•  In conjunction with or as a supplement to other anesthetics

These types of drugs have a rapid onset and a short duration of action. They depress the CNS to produce hypnosis and anesthesia but do not produce analgesia. Recovery after a small dose is rapid.

Etomidate, a nonbarbiturate, is used for induction of anesthesia. Etomidate also may be used to supplement other anesthetics, such as nitrous oxide, for short surgical procedures. It is a hypnotic without analgesic activity.

Propofol (Diprivan) is used for induction and maintenance of anesthesia. It also may be used for sedation during diagnostic procedures and procedures that use a local anesthetic. This drug also is used for continuous sedation of intubated or respiratory-controlled patients in intensive care units.

Midazolam, a short-acting benzodiazepine CNS depressant, is used as a preanesthetic drug to relieve anxiety; for induction of anesthesia; for conscious sedation before minor procedures, such as endoscopy; and to supplement nitrous oxide and oxygen for short surgical procedures. When the drug is used for induction anesthesia, the patient gradually loses consciousness over a period of 1 to 2 minutes.

Ketamine (Ketalar) is a rapid-acting general anesthetic. It produces an anesthetic state characterized by profound analgesia, cardiovascular and respiratory stimulation, normal or enhanced skeletal muscle tone, and occasionally mild respiratory depression. Ketamine is used for diagnostic and surgical procedures that do not require relaxation of skeletal muscles, for induction of anesthesia before the administration of other anesthetic drugs, and as a supplement to other anesthetic drugs.

Nitrous oxide is the most commonly used anesthetic gas. It is a weak anesthetic and is usually used in combination with other anesthetic drugs. It does not cause skeletal muscle relaxation. The chief danger in the use of nitrous oxide is hypoxemia. Nitrous oxide is nonexplosive and is supplied in blue cylinders (oxygen tanks are green).

Enflurane (Ethrane) is a volatile liquid anesthetic that is delivered by inhalation. Induction and recovery from anesthesia are rapid. Muscle relaxation for abdominal surgery is adequate, but greater relaxation may be necessary and may require the use of a skeletal muscle relaxant. Enflurane may produce mild stimulation of respiratory and bronchial secretions when used alone. Hypotension may occur when anesthesia deepens.

Isoflurane (Forane) is a volatile liquid given by inhalation. It is used for induction and maintenance of anesthesia.

Desflurane (Suprane), a volatile liquid, is used for induction and maintenance of anesthesia. A special vaporizer is used to deliver this anesthetic, because delivery by mask results in irritation of the respiratory tract.

Sevoflurane (Ultane) is an inhalational analgesic. It is used for induction and maintenance of general anesthesia in adult and pediatric patients for both inpatient and outpatient surgical procedures.

The opioid analgesic fentanyl (Sublimaze) and the neuroleptic drug (major tranquilizer) droperidol (Inapsine) may be used together. The combination of these two drugs results in neuroleptanalgesia, which is characterized by general quietness, reduced motor activity, and profound analgesia. Complete loss of consciousness may not occur unless other anesthetic drugs are used. A combination of fentanyl and droperidol may be used for the tranquilizing effect and analgesia for surgical and diagnostic procedures. It may also be used as a preanesthetic for the induction of anesthesia and in the maintenance of general anesthesia.

The use of droperidol as a tranquilizer, as an antiemetic to reduce nausea and vomiting during the immediate postanesthesia period, as an induction drug, and as an adjunct to general anesthesia has decreased because of its association with fatal cardiac dysrhythmias. Fentanyl may be used alone as a supplement to general or regional anesthesia. It may also be administered alone or with other drugs as a preoperative drug and as an analgesic during the immediate postoperative period.

Remifentanil (Ultiva) is used for induction and maintenance of general anesthesia and for continued analgesia during the immediate postoperative period. This drug is used cautiously in patients with a history of hypersensitivity to fentanyl.

The various skeletal muscle relaxants that may be used during general anesthesia are listed in Table 17.3. These drugs are administered to produce relaxation of the skeletal muscles during certain types of surgeries, such as those involving the chest or abdomen. They may also be used to facilitate the insertion of an endotracheal tube. Their onset of action is usually rapid (45 seconds to a few minutes), and their duration of action is 30 minutes or more.

General surgical anesthesia is divided into the following stages:

Induction is a part of stage I anesthesia. It begins with the administration of an anesthetic drug and lasts until consciousness is lost. With some induction drugs, such as the short-acting barbiturates, this stage may last only 5 to 10 seconds.

Stage III is the stage of surgical analgesia and is divided into four parts, planes, or substages. The anesthesiologist differentiates these planes by the character of the respirations, eye movements, certain reflexes, pupil size, and other factors. The levels of the planes range from plane 1 (light) to plane 4 (deep). At plane 2 or 3, the patient is usually ready for the surgical procedure.

Stage IV is the stage of respiratory paralysis and is a rare and dangerous stage of anesthesia. At this stage, respiratory arrest and cessation of all vital signs may occur.