Histologically, acral nevus is characterized by a circumscribed and usually symmetrical, lentiginous, and nested pattern. Melanocytes are arranged mostly in well-demarcated nests mainly located at the dermoepidermal junction. The nests are variable in size and often vertically oriented. However, solitary arranged melanocytes can be found in the lower epidermis and occasionally even in the upper epidermis. It was reported that random single cells arrangement could be prominent in acral nevi and was termed Melanocytic Acral Nevus with Intraepidermal Ascent of Cells (“MANIAC mole”) [8]. This is an example of pagetoid melanocytosis, also known as transepidermal migration of melanocytes which is a process seen in melanoma and some nevi at special sites [9, 10] (between 38 % and 61 % of acral nevi) [11, 12]. However, when there is pagetoid infiltration of the epidermis by single atypical cells, or small groups of atypical cells with pale cytoplasm, particularly at the periphery of the lesion, such melanocytic proliferations should be carefully evaluated to rule out melanoma [11–13]. It should be taken into consideration, as mentioned above, that such features can be seen in acral nevi cut parallel to the skin marking (dermatoglyphics) [2]. The nevus cells may show conspicuous pale-staining cytoplasm and hyperchromatic to vesicular nuclei, sometimes with mild cytological atypia. Nucleoli may be prominent. The rete ridges may be elongated and narrow. In addition, melanocytes along the dermoepidermal junction frequently display dendritic morphology. Involvement of eccrine ducts (acrosyringium) by melanocytic nests occurs, but is usually limited to upper portions of ducts. Pigmentary incontinence is generally present and there may be mild dermal fibrosis with a sparse lymphocytic infiltrate. A dense lymphocytic infiltrate in the dermis should raise the possibility of melanoma [13]. The dermal component will show maturation, bland cytology, and lack mitotic activity (Fig. 16.1f–i). 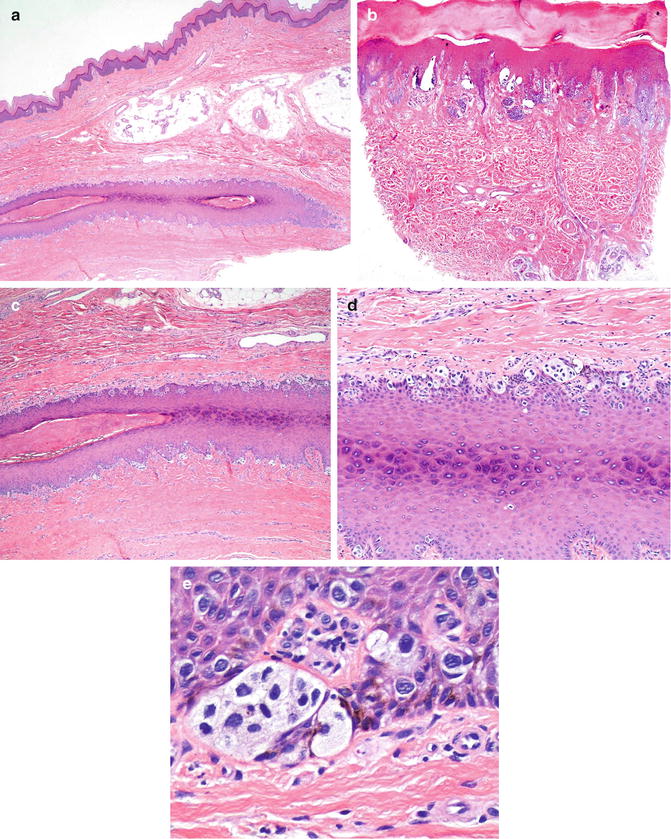 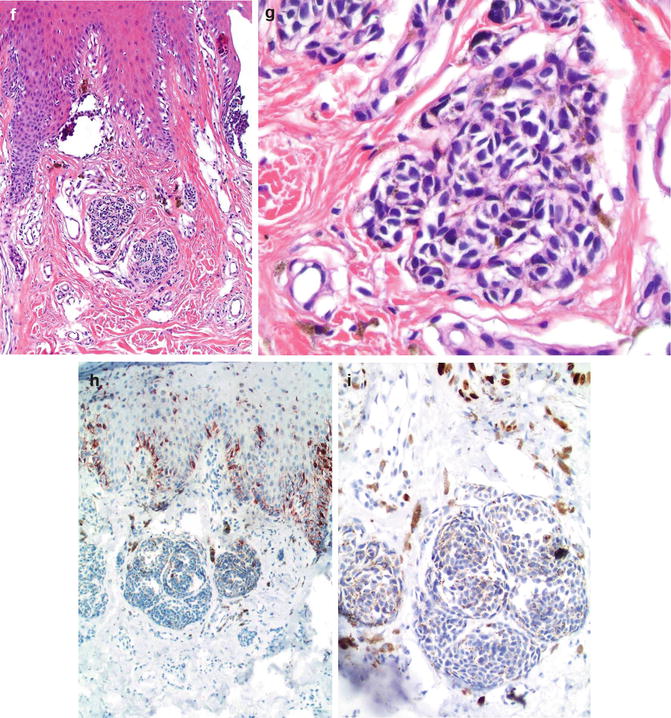 (a) Melanoma of nail matrix (acral lentiginous melanoma): Atypical melanocytic proliferation along dermoepidermal junction with irregular acanthosis of nail matrix and proximal nail fold as compared with compound melanocytic proliferation on acral skin in compound acral nevus. Higher magnification demonstrates large irregular melanocytic nests and atypical epithelioid melanocytes with pale cytoplasm and single cell growth along dermoepidermal junction, some pagetoid upward migration of single cells is observed. This pattern of growth can be focal or skipped area within the lesion (b). Melanocytic nests showing severe cytological atypia with pale cytoplasm and enlarged hyperchromatic and vesicular nuclei. There is no invasive component with sparse superficial dermal lymphocytic infiltrate. The diagnosis is melanoma in situ, acral lentiginous subtype (c–e). In acral melanocytic nevi, compound type; the melanocytes arrange along dermoepidermal junction in nests and single cells with minimal pagetoid upward migration in the center of nevus without cytological atypia. Dermal nests are composed of small round melanocytes showing maturation pattern. There is no lymphocytic infiltrate and no dermal mitoses (f–g). Maturation pattern of HMB-45 which is positive in scattered cells in the epidermis and negative Ki-67 in dermal components support banal acral nevi (h–i)
The vast majority of subungual nevi occur in children with a well-demarcated, uniformly pigmented, single, longitudinal band. Histologically they are junctional, characterized by several, well-formed nests, with only focal, solitary melanocytes and without atypia. Occasionally, there may be asymmetry, confluence, and with angulation and distortion of the junctional nests; such features should not be overinterpreted as diagnostic of melanoma [14]. As mentioned earlier, pagetoid epidermal migration is commonly seen in acral nevi but the pattern of pagetoid spread is usually orderly and confined to the central portion of the nevi.

Clinically, standard acral nevi should be relatively easy to diagnose. However, the differential diagnosis includes a spectrum of other melanocytic lesions such as acral lentigo, acral dysplastic nevi, acral Spitz nevi, and acral congenital melanocytic nevi. The most important differential diagnosis is acral lentiginous melanoma (ALM), especially in the early stage or ALM in situ. Other non-melanocytic pigmented lesions in the differential diagnosis include seborrheic keratosis, pigmented basal cell carcinoma, squamous cell carcinoma, palmoplantar warts, and traumatic inoculation (graphite). Also included are flat, pigmented lesions of tinea nigra (superficial fungal infection by Hortaea werneckii) and intracorneal hemorrhage post trauma.
Acral dysplastic nevi are distinguished from acral standard nevi by the presence of shoulder, dusty pigmentation, and bridging nests, in addition to lamellar and eosinophilic fibrosis. A host inflammatory response is generally absent in acral standard nevi. They differ from acral lentiginous melanoma by the absence of irregular epidermal acanthosis, only mild cytological atypia, rare mitotic figures, and by the presence of maturation of the dermal component (when present). The presence of a dense lymphocytic infiltrate is highly suspicious for melanoma and should prompt careful examination of additional sections. Nevi on the distal lower extremity (ankle), with female predominance, may have moderate to severe architecture but only mild to moderate cytological atypia [15]. As such, they share features with acral nevi, dysplastic nevi, and melanoma in situ. However, these lesions show benign clinical course without recurrence after complete excision. This subgroup of ankle-located nevi might represent early dysplastic nevi [16] or may be part of “special” nevi.
Spitz nevi of acral skin can demonstrate extensive pagetoid spread of large epithelioid atypical melanocytes in symmetrical fashion. These lesions are usually small, circumscribed, in children and adolescents, composed of junctional nests of epithelioid and spindle-shaped melanocytes with scattered Kamino bodies. Dermal melanocytic nests can be present with pattern of maturation and exceptional, superficial mitotic figures. Since the most common site of acral lentiginous melanoma is the sole, acral Spitz nevus occurring on the sole should be studied with special care [17].
Acral congenital melanocytic nevi are comparatively less common than in other locations. They may be small, medium, or giant (>20 cm) with tendency to develop malignant transformation in larger lesions [18, 19]. Histologic features include benign-appearing melanocytes involving around skin appendages. There is maturation in the deeper areas and melanocytes disperse among collagen bundles rather than showing a “pushing” border with the adjacent dermis.
Acral lentiginous melanoma (ALM) is a distinct variant that occurs on the palms, soles, and subungual sites. ALM was proposed as the fourth subtype by Reed in 1976 [20]. ALM accounts for approximately 8–10 % of all melanomas in Caucasians. It is, however, the predominant subtype affecting Afro-Caribbeans and Asians. The tumor is particularly common on the digits (especially beneath the nails) and on weight-bearing sites; plantar tumors are most common, with the heel being the most frequently affected region. ALM usually presents as irregular, gradually enlarging, and variable pigmented macules (Fig. 16.2a). With progression to vertical growth phase, there is relatively frequent ulceration. In Caucasians, ALM presents most often in the seventh decade, has an equal incidence in both sexes, and it is generally associated with a poor prognosis since tumors are generally thick by the time of diagnosis. Mucosal melanomas are often classified within the acral lentiginous subtype, given a partial morphologic and molecular overlap. Clinically, acral nevus is usually small sized (less than or equal to 7 mm) with a light to dark brown striated macular component. As mentioned above, on dermoscopic examination, the pigmentation of acral nevi is accentuated in dermatoglyphic furrows and occasionally around eccrine ostia, thereby creating reproducible patterns. In contrast, in ALM the pigment is distributed along the dermatoglyphic ridges.

(a) Acral lentiginous melanoma on the heel: poorly circumscribed, irregularly pigmented, hyperkeratotic brownish plaques, a commonly affected site; (b) subungual melanoma: longitudinal melanonychia (melanonychia striata) on the right thumb nail. The broad, irregularly pigment band on the nail plate with minimal extension of brown pigmentation into the adjacent lateral nail fold. (Hutchinson sign)
Subungual ALM, which most commonly affects the great toe and the thumb, is a rare tumor, accounting for only 2 % of all cutaneous melanoma. There is a female preponderance and ALM presents most often in the elderly. Longitudinal melanonychia is relatively common, a single pigmented nail streak that enlarges in size and varies in color. The lesion may extend onto the proximal or lateral nail fold (Hutchinson sign) (Fig. 16.2b). Other clinical changes are nail dystrophy (thickening and splitting) in early lesions and ulceration and hemorrhage in late stage lesions [21, 22]. Several studies have found that 46–60 % of the patients with subungual ALM report a history of antecedent trauma [23].
Histologically, distinction of acral nevi form ALM in early stage can be troublesome because both may have overlapping features such as asymmetry, poor circumscription, and focal pagetoid upward migration. Suprabasal melanocytes in acral nevi are relatively more columnar, circumscribed, and less prominent than in melanomas. Signoretti et al. [2] reported that symmetry, circumscription, the columnar ascending melanocytes and organization of the junction component are all influenced by the histologic plane of section when nevi sectioned perpendicular to dermatoglyphics are more likely to have benign attributes. Furthermore, in acral sites, upward migration of single melanocytes into the spinous and granular layers of the epidermis is considered a common phenomenon. On the other hand, severe melanocytic atypia and a dense lymphocytic infiltrate have been found to be reliable features indicative of melanoma [13]. The most useful clue indicating the benign nature of the lesion is the maturation of melanocytes as they reach the dermis (transition between larger cells at the junction toward small nevoid cells at the base of the lesion) (Fig. 16.1f–g).
The invasive component of ALM may consist of epithelioid cells, spindle cells, small nevus-like cells or highly pleomorphic cell type [24]. In a significant number of these cases, the dermal component shows an unusual morphology including the presence of giant, nevoid, and clear cells (Fig. 16.3a–c). Neural differentiation and perineural infiltration may also occur [25]. Phan et al. [26] reported the presence of small nevus cells in dermal component in association with a worse prognosis and they also found that a minority of ALM (4 % of cases) had desmoplastic stromal response. Moreover, it is not uncommon for tumor cells to have infiltrated the deep dermis or subcutaneous tissue by the time of diagnosis [27]. Furthermore, the presence of a deep-seated nodules of pale-staining epithelioid to spindle-shaped cells (clear cells) with positive melanocytic markers (S100, HMB-45, and MART-1) and lack of epidermal or junctional melanocytic component on the acral location of young individuals, should raise the suspicion for clear cell sarcoma (Fig. 16.4a–e). Tumor-infiltrating lymphocytes (TILs) were often present in the series of subungual melanomas reported from the Sydney Melanoma Unit [28]. Therefore, the presence of TILs favors melanoma over acral nevi. Features that distinguish subungual melanoma in situ form subungual melanocytic macules include pagetoid spread, multinucleated melanocytes, lichenoid inflammatory reaction, and the presence of confluent stretches of solitary unit of melanocytes in melanoma in situ (Figs. 16.1a–e and 16.5a–c) [14]. In addition to the most common acral lentiginous pattern, subungual or acral melanomas may rarely represent superficial spreading and nodular histological variants. Nevoid and desmoplastic melanoma are unusual on volar skin but represent disproportionate sources of diagnostic errors. ALM typically have a lentiginous in situ component as opposed to the obvious pagetoid upward spreading as in other non-acral melanomas, and melanoma arising at the site of an acral nevus is uncommon. Mild lentiginous growth can be expected in acral nevi, its presence at the margin of the specimen should raise the concern of either a potential precursor for ALM or the inability to assess the adjacent area to exclude melanoma, especially in the nail matrix biopsies. Despite acral nevi are more common than ALM [29], in doubt of peripheral margin involvement, re-excision to perform the complete histologic evaluation and removal should be recommended in such cases. Comparison between histopathologic findings between acral nevus and acral lentiginous melanoma are shown in Table 16.2. 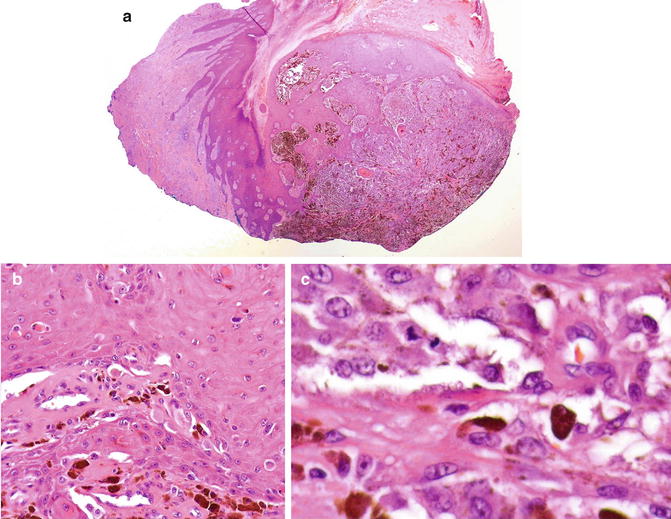