The abdominopelvic cavity contains a large proportion of the digestive (see Chapter 33) and urogenital organs (see Chapter 37) and their supporting neurovascular structures. It is enclosed by 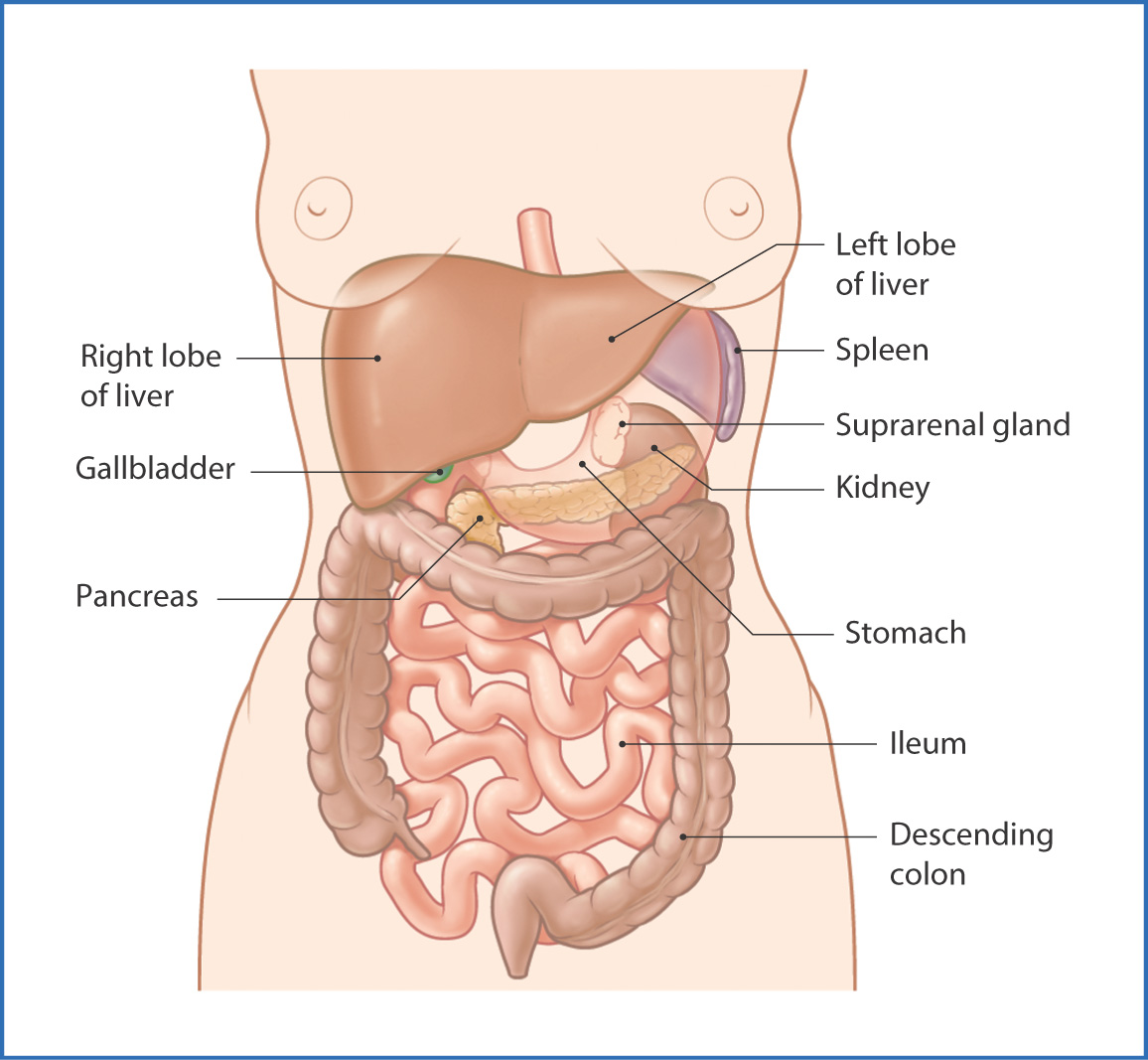 Bony support for the abdominopelvic cavity is provided by the inferior ribs, the thoracic and lumbar vertebrae, and the superior part of the pelvis. The muscles described in Chapters 25, 35, and 36 also support this region.

The liver (Fig. 34.2) is the largest glandular organ in the body and is located in the right upper quadrant of the peritoneal cavity of the abdomen. It is subphrenic and protected by the lower right ribs. 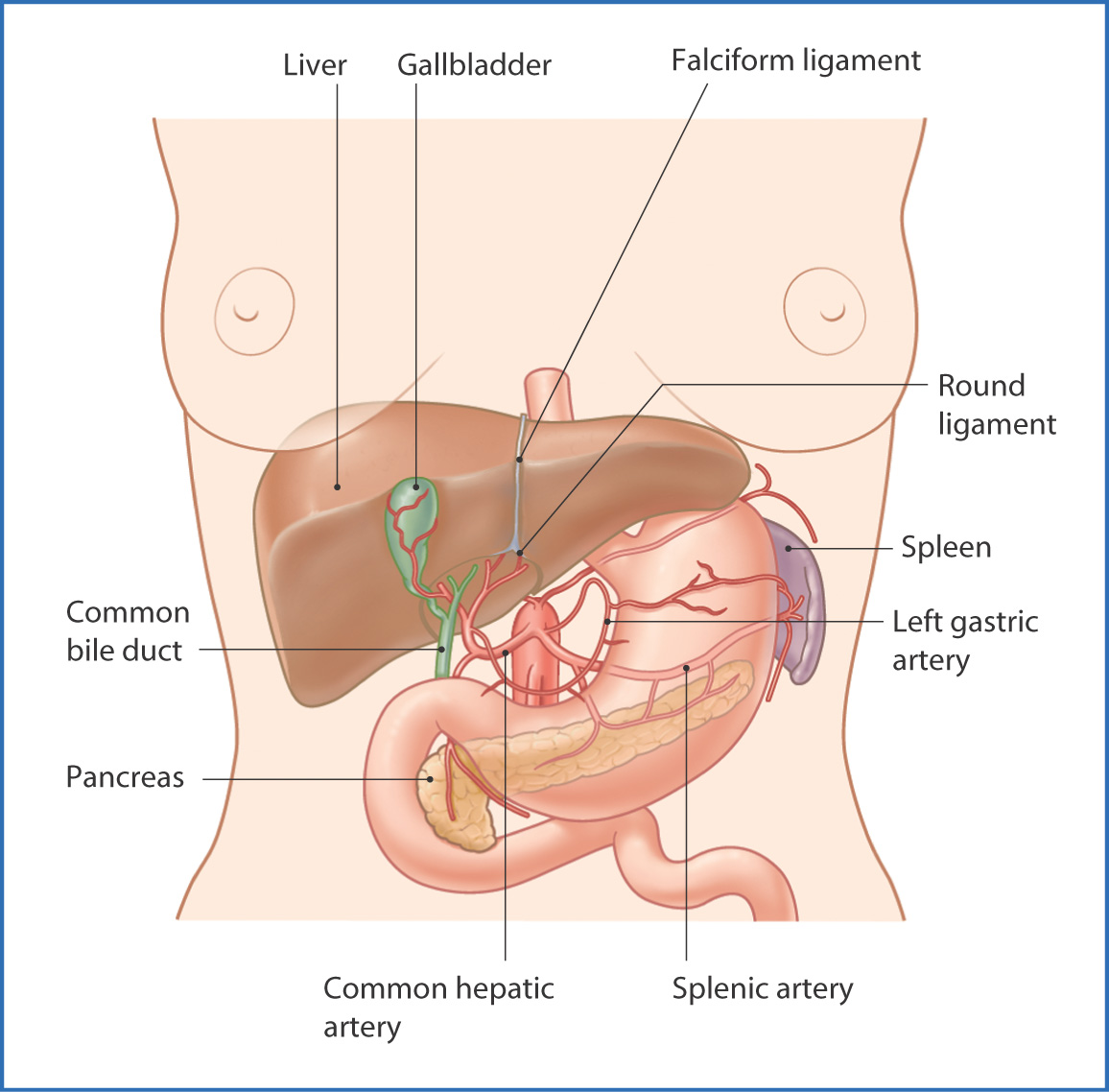 The liver receives blood from the hepatic portal vein, which carries nutrients from the gastrointestinal tract. Within the liver, these substances are metabolized by the appropriate pathway.

The superior surface of the liver (the diaphragmatic surface) interfaces with the diaphragm, and the inferior surface (the visceral surface) interfaces with the gastrointestinal tract. The liver is enclosed in peritoneum, except for a small part of the diaphragmatic surface (the bare area). The triangular, falciform, and coronary ligaments, which are at the ends of the bare area, tether the liver to the diaphragm. The falciform ligament, between the left and right anatomical lobes of the liver, extends anteriorly from the liver to insert onto the internal surface of the anterior abdominal wall. Embryologically, the round ligament of the liver contains the umbilical vessels as they enter the abdomen and traverse the liver to provide blood directly to the heart.

On the right side of the visceral surface of the liver are the gallbladder and inferior vena cava. On the left side the fissure for the round ligament, the falciform ligament, and the ligamentum venosum divide the liver into left and right lobes. At the midpoint between the gallbladder and inferior vena cava is the porta hepatis, which is the entrance and exit point for the hepatic arteries, hepatic portal vein, hepatic ducts, autonomic nerves, and lymphatic vessels.

The liver is subdivided into left, right, quadrate, and caudate lobes:

Approximately 30% of the blood supply to the liver is from the left and right hepatic arteries, which enter the liver at the porta hepatis. The remaining 70% is from the hepatic portal vein, which carries blood poor in oxygen but rich in absorbed digestive products.

Venous drainage of the liver is provided by the left, intermediate, and right hepatic veins, which empty into the inferior vena cava along the posterior border of the liver.

Lymphatic drainage of the liver is through vessels that exit the liver at the porta hepatis and drain to abdominal lymph node groups at the liver and along the abdominal aorta.

The gallbladder (see Fig. 34.1) is a pear-shaped green reservoir that stores approximately 30 to 50 mL of bile. It lies on the visceral (inferior) surface of the liver and is suspended by peritoneal attachments. The gallbladder receives bile from the liver through the common hepatic duct and cystic duct. It concentrates the bile by absorbing water and salts. During digestion, as fats enter the small intestine, the gallbladder secretes concentrated bile into the cystic duct, which empties into the bile duct. From here the bile enters the duodenum at the major duodenal papilla. Secreted bile contains enzymes that continue the digestion of fats in the partially digested food.

Innervation of the gallbladder is autonomic and from the hepatic plexus. Its blood supply is from the cystic artery, which is usually a branch of the right hepatic artery. Venous drainage is by the cystic vein to the hepatic portal vein. Lymphatic drainage is to nodes at the porta hepatis and celiac lymph nodes.