5 Emergence and Global Spread of Infection


FIGURE 5–1. Infectious disease mortality rates in the United States decreased greatly during most of the 20th century. The insert is an enlargement of the right-hand portion of the graph, and the death rate has shown a rising trend since 1982. (Reproduced with permission from Willey JM: Prescott, Harley, & Klein’s Microbiology, 7th edition. McGraw-Hill, 2008.) 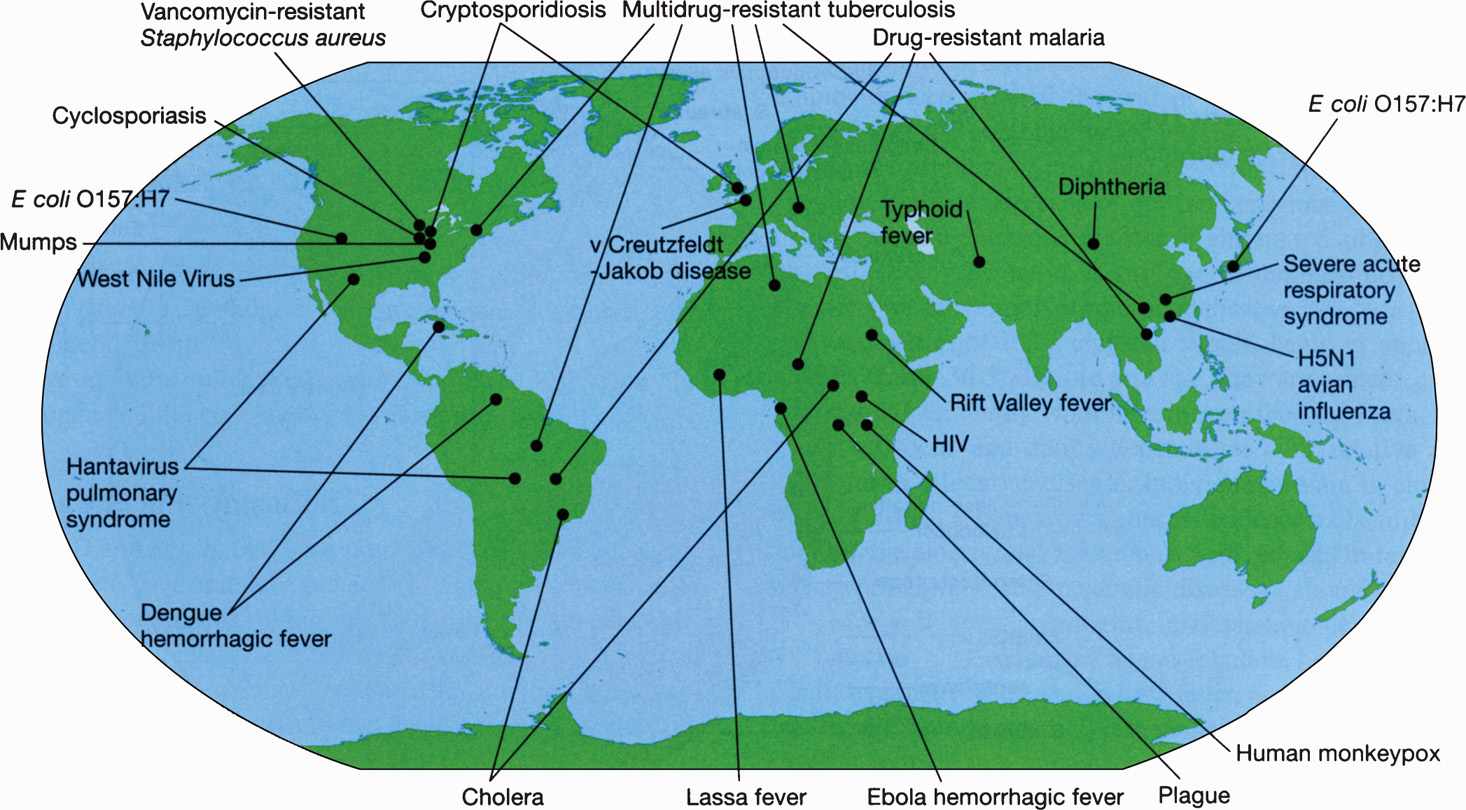 FIGURE 5–2. Examples of emerging and reemerging infectious diseases. Although infections such as HIV are shown in a few locations here, they are indeed widespread and a threat in many regions. (Reproduced with permission from Willey JM: Prescott, Harley, & Klein’s Microbiology, 7th edition. McGraw-Hill, 2008.)

Infectious diseases of humans may be caused by exclusively human pathogens such as Shigella; by environmental organisms such as Legionella pneumophila; or by organisms that have their primary reservoir in animals such as Salmonella.

Noncommunicable infections are those that are not transmitted from human to human and include: (1) infections derived from the patient’s normal flora, such as peritonitis after rupture of the appendix; (2) infections caused by the ingestion of preformed toxins, such as botulism; and (3) infections caused by certain organisms found in the environment, such as clostridial gas gangrene. Some diseases transmitted from animals to humans (zoonotic infections), such as rabies and brucellosis, are not transmitted between humans, but others such as plague may be transmitted at certain stages. Noncommunicable infections may still occur as common-source outbreaks, such as food poisoning from an enterotoxin-producing Staphylococcus aureus–contaminated chicken salad or multiple cases of pneumonia from extensive dissemination of Legionella through an air-conditioning system. Because these diseases are not transmissible to others, they do not lead to secondary spread.

Communicable infections require an organism to be able to leave the body in a form that is directly infectious or to be able to become so after development in a suitable environment. The respiratory spread of the influenza virus is an example of direct communicability. In contrast, the malarial parasite requires a developmental cycle in a biting mosquito before it can infect another human. Communicable infections can be endemic, which implies that the disease is present at a low but fairly constant level, or epidemic, which involves a level of infection higher than that usually found in a community or population. In some infections, such as influenza, the infection can be endemic, persisting at a fairly low level from season to season. Introduction of a new strain, however, may result in epidemics, as illustrated in Figure 5–3. Communicable infections that are widespread in a region, sometimes worldwide, and have high attack rates are termed pandemic. 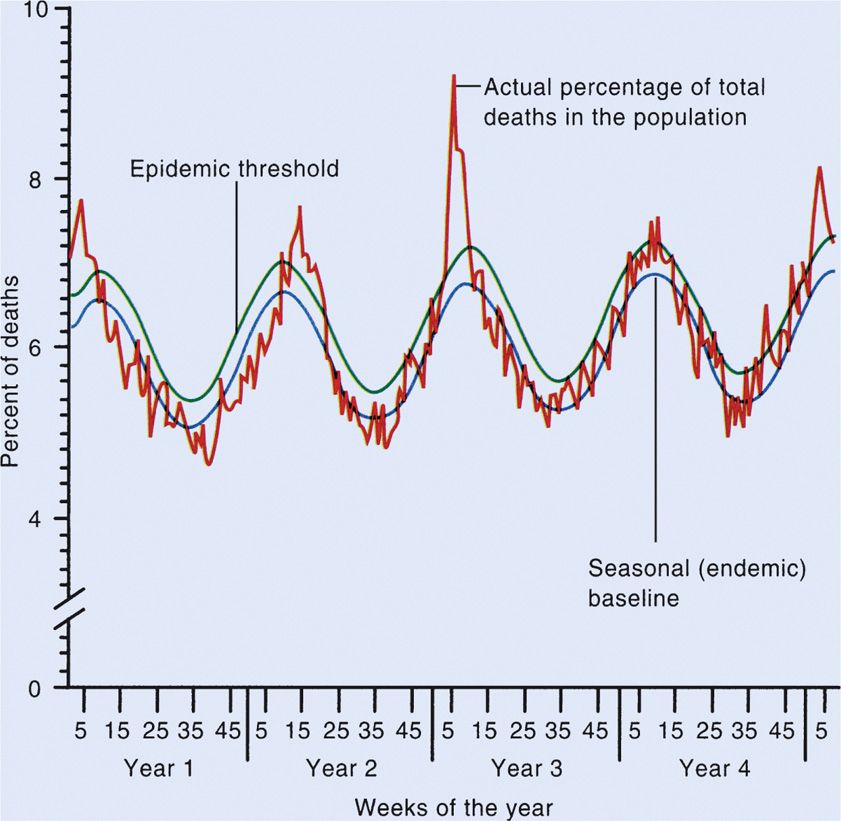 FIGURE 5–3. Endemic disease that can be epidemic. Example of yearly fluctuation of pneumonia and influenza mortality (expressed a percentage of all deaths.) (Reproduced with permission from Nester EW: Microbiology: A Human Perspective, 6th edition. 2009.)

An important consideration in the study of the epidemiology of communicable organisms is the distinction between infection and disease. Infection involves multiplication of the organism in or on the host and may not be apparent, for example, during the incubation period, or latent when little or no replication is occurring (eg, with herpesviruses). Disease represents a clinically apparent response by, or injury to, the host as a result of infection. With many communicable microorganisms, infection is much more common than disease, and apparently healthy infected individuals play an important role in disease propagation. Inapparent infections are termed subclinical, and the individual is sometimes referred to as a carrier. The latter term is also applied to situations in which an infectious agent establishes itself as part of a patient’s flora or causes low-grade chronic disease after an acute infection. For example, the clinically inapparent presence of S aureus in the anterior nares is termed carriage, as is a chronic gallbladder infection with Salmonella serotype Typhi that can follow an attack of typhoid fever and result in fecal excretion of the organism for years.

With some infectious diseases such as measles, infection is invariably accompanied by clinical manifestations of the disease itself. These manifestations facilitate epidemiologic control, because the existence and extent of infection in a community are readily apparent. Organisms associated with long incubation periods or high frequencies of subclinical infection, such as human immunodeficiency virus (HIV) or hepatitis B virus, may propagate and spread in a population for long periods before the extent of the problem is recognized. This makes epidemiologic control more difficult.

Infection can result in little or no illness

Carriers can be asymptomatic, but infectious to others

Incubation periods range from a few days to several months

Communicability of a disease in which the organism is shed in secretions may occur primarily during the incubation period. In other infections, the disease course is short but the organisms can be excreted from the host for extended periods. In yet other cases, the symptoms are related to host immune response rather than the organism’s action and, thus, the disease process may extend far beyond the period in which the etiologic agent can be isolated or spread. Some viruses can integrate into the host genome or survive by replicating very slowly in the presence of an immune response. Such dormancy or latency is exemplified by the herpesviruses, and the organism may emerge long after the original infection and potentially infect others.

Transmission to others can occur before illness onset

The inherent infectivity and virulence of a microorganism are also important determinants of attack rates of disease in a community. In general, organisms of high infectivity spread more easily, and those of greater virulence are more likely to cause disease than subclinical infection. The infecting dose of an organism also varies with different organisms and, thus, influences the chance of infection and development of disease. 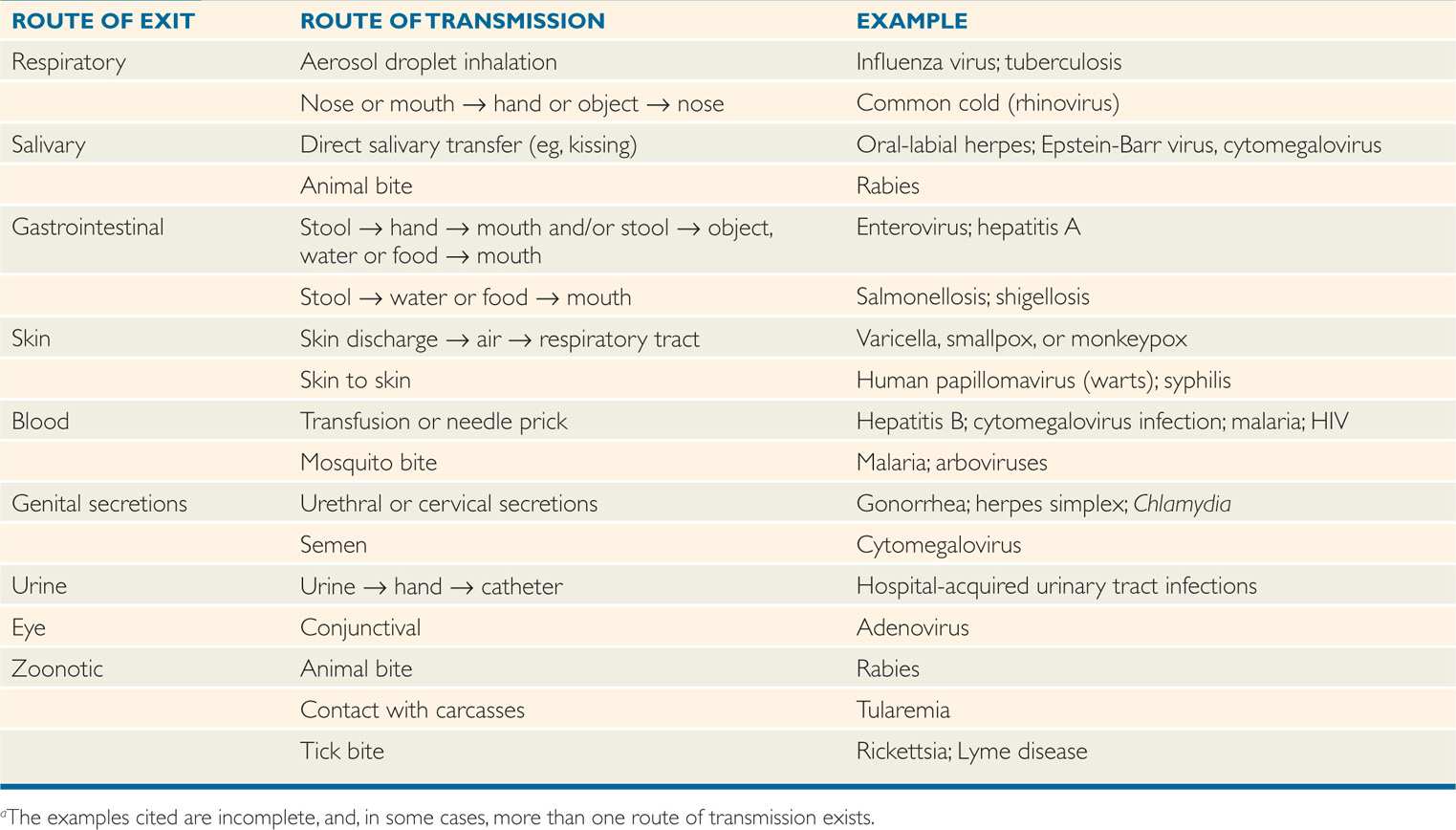 Many infections are transmitted by the respiratory route, often by aerosolization of respiratory secretions with subsequent inhalation by other persons. The efficiency of this process