Major cause of disease and death worldwide

Currently, about half of the world’s population lives in areas where malaria transmission could or does occur; of these, approximately 250 to 400 million experience new cases annually, with many individuals being infected more than once during any given year. About 1 million people, predominantly children living in Sub-Saharan Africa, die of malaria each year. Plasmodium falciparum, the most deadly of the malarial organisms and responsible for cerebral malaria, has developed resistance to several categories of antimalarial agents, and resistant strains are now found throughout Southeast Asia, parts of the Indian subcontinent, Southeast China, large areas of tropical America, and tropical Africa. Disturbingly, this parasite is developing increased resistance to artemisinin, the current frontline drug in the treatment of malaria. Although several new drugs are in development, it could take years before they reach the public that needs them the most. Growing resistance of the anopheline mosquito vectors of malaria to the less toxic and less expensive insecticides has resulted in a cutback of many malaria control programs. On top of that, many mosquito vectors of malaria are changing their habits, perhaps in response to our efforts to control them. In countries such as India, Pakistan, and Sri Lanka, where eradication efforts had previously interrupted parasite transmission, the disease incidence has increased 100-fold in recent years. In tropical Africa, the intensity of transmission defies current control measures. Of direct interest to American physicians is the spillover of this phenomenon to the United States. Presently, approximately 1000 cases of imported malaria are reported annually to the Centers for Disease Control and Prevention.

Resistance of malarial parasites to chemotherapeutics

Resistance of insect vectors to insecticides

Entamoeba spp., many of which are strictly commensalistic, are intestinal Protozoa that infect about 50% of the world’s population, with rates varying substantially depending on sanitary conditions. The pathogenic Entamoeba has historically been thought of as Entamoeba histolytica and it is estimated that up to 10% of the world’s population harbor this parasite. A noninvasive species, E dispar, which is morphologically similar to E histolytica has been recognized and probably accounts for 90% of all reported E histolytica-like infections. The invasive E histolytica, which is morphologically identical to E dispar, produces amebiasis, a disease characterized by intestinal ulcers and liver abscesses. Rates up to 4% are seen in the United States. It is more commonly seen in areas of the world with poor sanitation, but occurs in the United States as well, particularly in institutions for the mentally retarded and among migrant workers and some male homosexuals.

Amebic infections in 10% of the world population

In the poor, rural areas of Latin America, Trypanosoma cruzi infects an estimated 12 million individuals, leaving many with the characteristic heart and gastrointestinal lesions of Chagas disease that characterize the chronic phase of this disease. This parasite has a large reservoir host population, including many animals that live in peridomestic situations. This disease is transmitted by triatomine bugs that have also been found to be infected with T cruzi in the United States. In Africa, from the Sahara Desert in the north to the Kalahari in the south, related organisms, belonging to subspecies of the ancestral T brucei, cause one of the most lethal of human infections, sleeping sickness. Animal strains of this same organism limit food supplies by making the raising of cattle economically unfeasible over vast areas of the African continent. A large part of this latter problem is influenced by the activity of the vectors, members of the tsetse fly genus Glossina.

Leishmaniasis, a disease produced by an intracellular protozoan and transmitted by sandflies of the genus Phlebotomus, is found in parts of Europe, Asia, Africa, and Latin America. Clinical manifestations range from a self-limiting skin ulcer, known as oriental sore, through the mutilating mucocutaneous infection of espundia, to a highly lethal infection of the reticuloendothelial system (kala azar).

Leishmaniasis can cause cutaneous or disseminated disease

In 1947, in an article entitled “This Wormy World,” Stoll estimated that between the Tropic of Cancer and the Tropic of Capricorn, there were many more intestinal worm infections than people. The prevalence was judged to be far lower in temperate climates. The most serious of the helminthic diseases, schistosomiasis, affects an estimated 200 million individuals in Africa, Asia, and the Americas. These infections tend to be very chronic and persons with heavy worm burdens develop bladder, intestinal, and liver disease, which may ultimately result in death. The pathology accompanying schistosomiasis is largely the result of immune responses directed against eggs that get trapped in various tissues. Unfortunately, the disease is frequently spread as a consequence of rural development schemes involving irrigation projects. Egypt, Sudan, Ghana, and Nigeria have seen significant increases in the incidence of the disease in these areas due to extension of the snail vectors into new areas, often mitigating the economic gains of the development program itself.

Parasitic worm infections prevalent, may be spread by irrigation projects

The parasitic nematodes Ascaris lumbricoides, hookworms, and Trichuris infect more than 1.5 billion people. Collectively they account for tremendous morbidity that is manifest as reduced growth rates among children, iron deficiency, and anemia. Ascaris females can produce up to 250 000 extremely environmentally resistant eggs per day!

Larval tapeworm infections are a far more serious threat to human health than infections with adult tapeworms. This is exemplified by infection with the cysticercus of Taenia solium, which frequently results in neurocysticercosis. Another larval tapeworm infection caused by Echinococcus granulosus, results in hydatid cyst disease in humans. An endemic pocket of this disease exists in the four corners area of the United States.

Larval tapeworm infections cause serious illness. Two closely related filarial worms, Wuchereria bancrofti and Brugia malayi, which are endemic in Asia and Africa and transmitted by many species of mosquitoes, interfere with the flow of lymph and can produce grotesque swellings of the legs, arms, and genitals. Another filarid, transmitted by black flies, produces onchocerciasis (river blindness) in millions of Africans and Americans, leaving thousands blind.

The classification schemes for the Protozoa seem to be evolving even quicker than the organisms themselves. Within the context of this book a classification scheme used by classical parasitologists in textbooks has been adopted. It is based largely on light and electron microscopy and modes of locomotion, but takes into account current evolutionary thinking based on comparative genetics. Within the context of this scheme, the Protozoa are considered a subkingdom within the kingdom Protista. 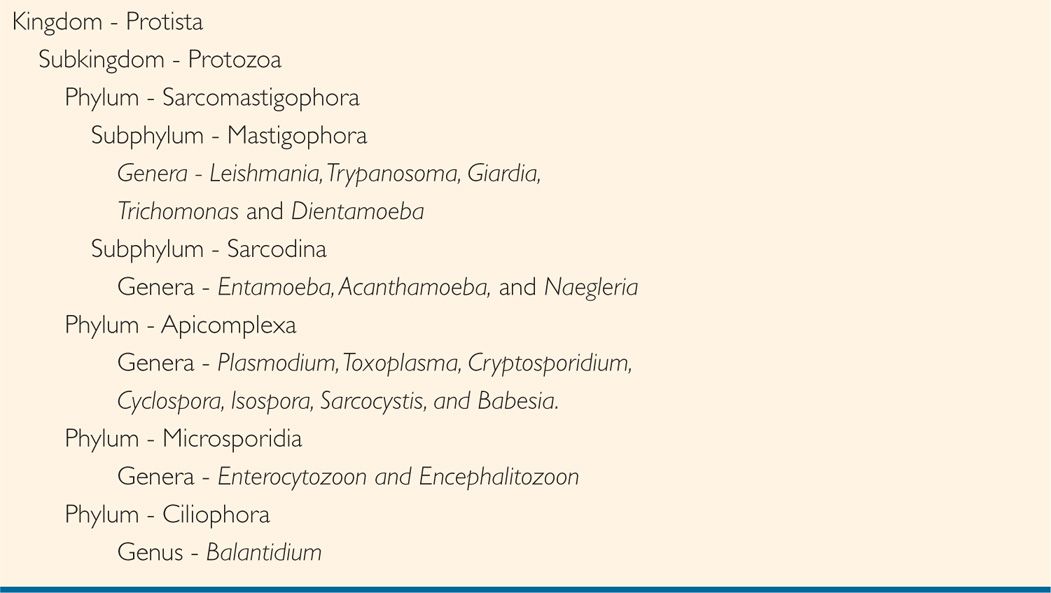 The Sarcomastigophora are an extremely diverse group including true flagellates of the subphylum Mastigophora and parasites such as those belonging to the genera Leishmania, Trypanosoma, Giardia, Trichomonas, and Dientamoeba. Mastigophorans include those that are obligate intracellular parasites (Leishmania), parasites of the blood vascular system (Trypanosoma), intestinal track (Giardia), or genital-urinary track (Trichomonas). The sub-phylum Sarcodina can also be found within this phylum and include the important genera Entamoeba, Acanthamoeba, and the ameba–flagellate Naegleria.

The Apicomplexa also represent a diverse group of organisms that have been placed together phylogenetically because of the presence of complex apical organelles in life cycle stages responsible for cellular invasion. All are obligate intracellular parasites for most of their life cycles. Parasites in this taxonomic grouping include members of the genera Plasmodium, Toxoplasma, Cryptosporidium, Cyclospora, Isospora, Sarcocystis, and Babesia.

The Microsporidia include an opportunistically important group of parasites called the microsporidia. Many infections in this group are seen in immunocompromised patients with the more important genera being Enterocytozoon and Encephalitozoon. The Ciliophora include a single genus, Balantidium, which is only occasionally encountered in humans.

Protozoa range in size from slightly more than 1 to more than 100 μm. They are single-celled organism and have a true membrane-bound nucleus. The nucleus contains clumped or dispersed chromatin and a central nucleolus or karyosome. The shape, size, and distribution of the nucleus can be useful in distinguishing protozoan species from one another.

The cytoplasm is frequently divided into an inner endoplasm and a thin outer ectoplasm. The granular endoplasm is concerned with nutrition and often contains food reserves, contractile vacuoles, and undigested particulate matter. The ectoplasm may be organized into specialized organelles of locomotion. In some species, these organelles appear as blunt, dynamic extrusions known as pseudopods. In others, highly structured thread-like cilia or flagella arise from intracytoplasmic basal bodies. Flagella are longer and less numerous than cilia and possess a structure and a mode of action distinct from those seen in prokaryotic organisms.

Ectoplasm has organelles of locomotion

Most parasitic Protozoa are heterotrophic and must assimilate organic nutrients. This assimilation is accomplished by engulfing soluble or particulate matter in digestive vacuoles, processes termed pinocytosis and phagocytosis, respectively. In some species, food is ingested at a definite site, the peristome or cytostome. Food may be retained in special intracellular reserves, or vacuoles. Undigested particles and wastes are extruded at the cell surface by mechanisms that are the reverse of those used in ingestion. The intracellular location of many of these parasites means that host cells have to be modified to accommodate for transport and assimilation of nutrients. This is especially true among the apicomplexans and parasites like Leishmania. Many parasitic protozoans are facultative anaerobes in their definitive host (E histolytica and Giardia are excellent examples). The African trypanosomes have to switch from an inefficient aerobic to a more efficient mode of aerobic respiration when they take up residence in their vector. This is accomplished by profound changes that take place within the kinetoplast–mitochondrial complex of these organisms. The malaria parasite P falciparum has been found to complete its development within the microaerophilic environment of postcapillary venules. This discovery now allows investigators to extensively cultivate this parasite in vitro. Some parasitic Protozoa are amitocondriate and utilize specialized organelles such as mitosomes (Giardia) or hydrogenosomes (Trichomonas vaginalis) where terminal events of electron transfer in anaerobic respiration occur.

Nutrients engulfed by phagocytosis or pinocytosis

Survival is ensured by fastidious reproductive and protective techniques. Reproduction in many parasitic protozoans is accomplished primarily by simple binary fission. In one phylum of Protozoa, the Apicomplexa, a cycle of multiple fission (schizogony) alternates with a period of sexual reproduction (sporogony). A similar mode of reproduction is seen in the microsporidia although somewhat modified. Many Protozoa, when exposed to an unfavorable milieu, become less active metabolically and secrete a cyst wall capable of protecting the organism from physical and chemical conditions that would otherwise be lethal. In this form, the parasite is better equipped to survive passage from host to host in the external environment. Giardia, Entamoeba, Naegleria, Cryptosporidium, Cyclospora, and others are all capable of forming environmentally protective cysts or oocysts. The micro-sporidia produce spores. Immunoevasive mechanisms described in later chapters also contribute to survival of these parasites within the host.

As for the Protozoa, the classification of helminth parasites is ever changing. The scheme used in this book is a more classical one and readily accepted and understood by most parasitologists. Accordingly, the various helminth groups discussed are placed into distinct phyla within the subkingdom Metazoa of the kingdom Animalia, which includes all multicellular organisms. These phyla include the Platyhelminthes with the important classes Trematoda (flat worms) and Cestoidea (tapeworm) the Nemathelminthes, or roundworms, and the Acanthocephala, or thorny-headed worms (Table 48–3).