45 Dermatophytes, Sporothrix, and Other Superficial and Subcutaneous Fungi

Dermatophytoses are superficial infections of the skin and its appendages, commonly known as ringworm (Figure 45–1), athlete’s foot, and jock itch. They are caused by species of three genera collectively known as dermatophytes. These fungi are highly adapted to the nonliving, keratinized tissues of nails, hair, and the stratum corneum of the skin. The source of infection may be humans, animals, or the soil. 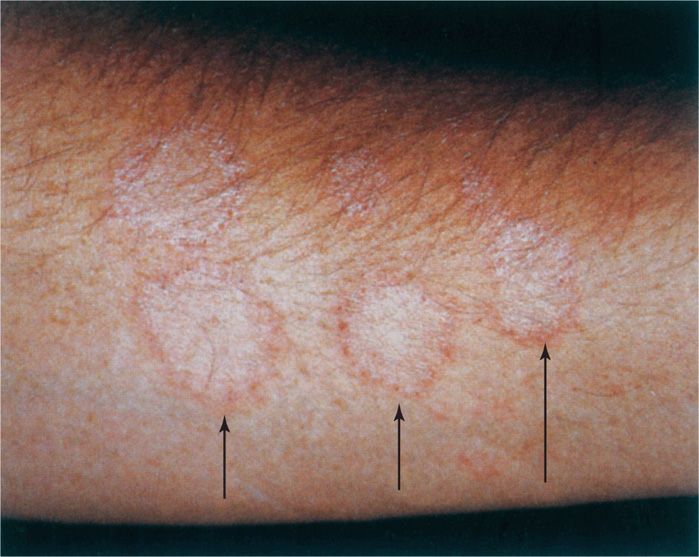 FIGURE 45–1. Ringworm. The ring-like lesions on this forearm are due to advancing growth of Trichophyton mentagrophytes. (Reproduced with permission from Willey JM: Prescott, Harley, & Klein’s Microbiology, 7th edition. McGraw-Hill, 2008.)

The three genera of medically important dermatophytes (literally, skin-plants) are Epidermophyton, Microsporum, and Trichophyton. They are separated primarily by the morphology of their macroconidia and the presence of microconidia. Many species cause dermatophyte infections; the most common of these are listed in Table 45–1. They require a few days to a week or more to initiate growth. Most grow best at 25°C on Sabouraud’s agar, which is usually used for culture. Although teleomorphic (sexual) forms have been discovered, the medically important dermatophytes continue to be identified in their more familiar anamorphic (asexual) state. The hyphae are septate, and their conidia may be borne directly on the hyphae or on conidiophores. Small microconidia may or may not be formed; however, the larger and more distinctive macroconidia are usually the basis for identification.

Dermatophytoses are slowly progressive eruptions of the skin and its appendages that may be unsightly, but are not painful or life threatening. The manifestations (and names) vary, depending on the nature of the inflammatory response in the skin, but they typically involve erythema, induration, itching, and scaling. The most familiar is “ringworm,” which derives its name from the annular shape of creeping margin at the advancing edge of dermatophyte growth.

There are ecologic as well as geographic differences in the occurrence of various dermatophyte species. Some are primarily adapted to the skin of humans (anthropophilic), others to animals (zoophilic), and various others to the environment (geophilic). Although these are their primary habitats, all of the species discussed here may infect humans from these sources. Many wild and domestic animals, including dogs and cats, are infected with certain dermatophyte species and represent a large reservoir for infection of humans. There are differences between temperate and tropical climates in the number of cases and isolations from nonhuman sources of the different species. Many of these differences are changing with shifts in population.

Reservoir may be human, animal, or soil

Dermatophytoses begin when minor traumatic skin lesions come in contact with dermatophyte hyphae or conidia shed from another infection. These forms may remain infectious for months in the environment. Susceptibility may be enhanced by local factors such as the composition surface fatty acids. Once the stratum corneum is penetrated, the organism can proliferate in the keratinized layers of the skin-aided digestion mediated by a variety of proteinases. Another class of proteins (LysM) suggested by genomic studies may bind to cell wall components and mask them from the host immune response. The course of the infection depends on the anatomic location, moisture, the dynamics of skin growth and desquamation, the speed and extent of the inflammatory response, and the infecting species. For example, if the organisms grow very slowly in the stratum corneum and if turnover by desquamation of this layer is not retarded, the infection will probably be short-lived and cause minimal signs and symptoms. Inflammation tends to increase skin growth and desquamation rates and helps limit infection, whereas immunosuppressive agents such as corticosteroids decrease shedding of the keratinized layers and tend to prolong infection. Invasion of any deeper structures is extremely rare.

Most infections are self-limiting, but those in which fungal growth rates and desquamation are balanced and in which the inflammatory response is poor tend to become chronic. The lateral spread of infection and its associated inflammation produce the characteristic sharp advancing margins that were once believed to be the burrows of worms. This characteristic is the origin of the common name ringworm and the Latin term tinea (worm), which is often applied to the clinical forms of the disease (Figure 45–1).

Infection may spread from skin to other keratinized structures, such as hair and nails, or may invade them primarily. The hair shaft is penetrated by hyphae (Figure 45–2), which extend as arthroconidia either exclusively within the shaft (endothrix) or both within and outside the shaft (ectothrix). The end result is damage to the hair shaft structure, which often breaks off. Loss of hair at the root and plugging of the hair follicle with fungal elements may result. Invasion of the nail bed causes a hyperkeratotic reaction, which dislodges or distorts the nail. 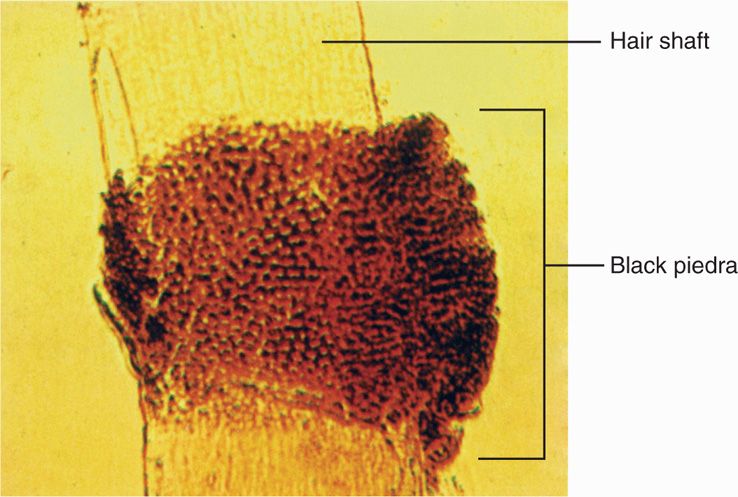 Hair shaft is penetrated and broken by hyphae

Most dermatophyte infections pass through an inflammatory stage to spontaneous healing. Phagocytes are able to use oxidative pathways to kill the fungi intracellularly and extracellularly. Little is known about the factors that mediate the host response in these self-limiting infections or whether they confer immunity to subsequent exposures. Antibodies may be formed during infection but play no known role in immunity. Most clinical and experimental evidence points to the importance of T-cell–mediated TH1 responses, as with other fungal infections. The timing of the inflammatory response to infection correlates with appearance of delayed-type hypersensitivity, and resolution of infection is associated with the blastogenic T-lymphocyte responses. Enhanced desquamation with the inflammatory response helps remove infected skin.

Cell-mediated immune responses are the most important

Occasionally, dermatophyte infections become chronic and widespread. This progression has been related to host and organism factors. Approximately half of these patients have underlying diseases affecting their immune responses or are receiving treatments that compromise T-lymphocyte function. These chronic infections are particularly associated with Trichophyton rubrum, to which both normal and immunocompromised persons appear to be hyporesponsive. Although various mechanisms have been proposed, how this organism is able to grow without stimulating much inflammation remains unexplained.

Widespread infection is associated with T-lymphocyte defects and T rubrum