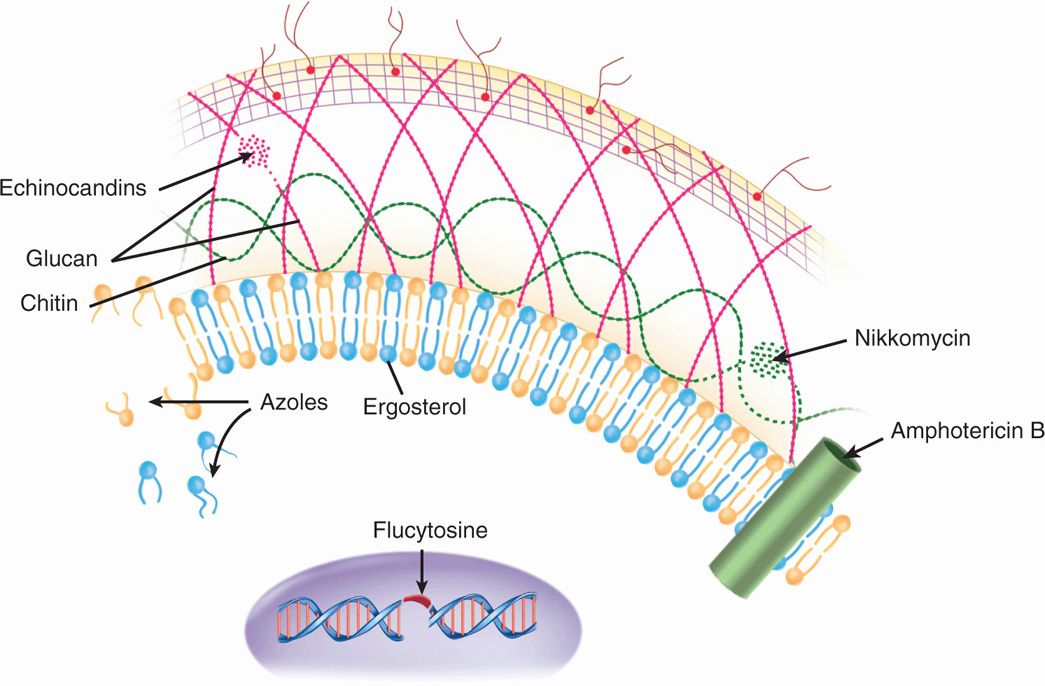 FIGURE 44–1. Action of antifungal agents. The sites where the major antifungal agents act in the cell wall (echinocandins, nikkomycin), cytoplasmic membrane (azoles, amphotericin B) and genome (flucytosine) are shown.

Treatment is most needed for dissemination in immunocompromised persons

The polyenes nystatin and amphotericin B are lipophilic and bind to ergosterol, the dominant sterol in the cytoplasmic membrane of fungal cells. After binding, they form annular channels, which penetrate the membrane and lead to leakage of essential small molecules from the cytoplasm and cell death. Their binding affinity for the ergosterol of fungal membranes is not absolute and includes sterols such as cholesterol, which are present in human cells. This is the basis of the considerable toxicity that limits their use. Almost all fungi are susceptible to amphotericin B, and the development of resistance is too rare to be a consideration in its use.

Active against most fungi

At physiologic pH, amphotericin B is insoluble in water and must be administered intravenously as a colloidal suspension. It is not absorbed from the gastrointestinal tract. The major limitation to amphotericin B therapy is the toxicity created by its affinity for mammalian as well as fungal membranes. Infusion is commonly followed by chills, fever, headache, and dyspnea. The most serious toxic effect is renal dysfunction and is observed in virtually every patient receiving a therapeutic course. Experienced clinicians learn to titrate the dosage for each patient to minimize the nephrotoxic effects. For obvious reasons, use of amphotericin B is limited to progressive, life-threatening fungal infections. In such cases, despite its toxicity it retains a prime position in treatment often by administration of an initial course of amphotericin followed by a less toxic agent. Preparations that complex amphotericin B with lipids have been used as a means to limit toxicity. The even greater toxicity of nystatin limits its use to topical preparations.

Insoluble compound must be infused in suspension

Therapy must be titrated against toxicity

The azoles are a large family of synthetic organic compounds, which includes members with antibacterial, antifungal, and antiparasitic properties. The important antifungal azoles for systemic administration are ketoconazole, fluconazole, itraconazole, and voriconazole. Clotrimazole and miconazole are limited to topical use. Other azoles are under development or evaluation. Their activity is based on inhibition of the enzyme (14 α-demethylase) responsible for conversion of lanosterol to ergosterol, the major component of the fungal cytoplasmic membrane. This leads to lanosterol accumulation and the formation of a defective membrane. Effects on the precursors of some hormones may cause endocrine side effects and restricts use in pregnancy. All antifungal azoles have the same mechanism of action. The differences among them are in avidity of enzyme binding, pharmacology, and side effects.

Ketoconazole, the first azole, has now been supplanted by the later azoles for most systemic mycoses. Although nausea, vomiting, and elevation of hepatic enzymes complicate the treatment of some patients, the azoles are much less toxic than amphotericin B. Fluconazole was the first azole with good central nervous system penetration, but itraconazole is now generally preferred for fungal meningitis. Azoles are also effective for superficial and subcutaneous mycoses in which the initial therapy either fails or is not tolerated by the patient. In general, itraconazole and, more recently, voriconazole are the primary azoles used together with, or instead of, amphotericin B for serious fungal infections. Clotrimazole and miconazole are available in over-the-counter topical preparations.

Less toxic than amphotericin B

The allylamines are a group of synthetic compounds that act by inhibition of an enzyme (squalene epoxidase) in the early stages of ergosterol synthesis. The allylamine group includes an oral and topical agent, terbinafine used in the treatment of dermatophyte (ringworm) infections.