Chlamydia trachomatis are round cells between 0.3 and 1 μm in diameter depending on the stage in the replicative cycle (see below). Their envelope is of the Gram-negative type including an outer membrane that contains lipopolysaccharide and proteins. A major difference is that chlamydiae lack the thin peptidoglycan layer between the outer membrane and the plasma membrane. Although there is no detectable peptidoglycan in chlamydial cells, genomic studies have demonstrated an almost complete set of genes for peptidoglycan synthesis. The outer membrane includes a major outer membrane protein (MOMP) which is immunogenic. Chlamydia are obligate intracellular parasites because they rely on the host cell for key amino acids and energy generating metabolites like ATP. Among bacteria only the mycoplasmas have a smaller genome.

Envelope has no peptidoglycan layer between membranes

The replicative cycle of chlamydiae is illustrated in Figure 39–1. It involves two major forms of the organism: a small, hardy infectious form termed the elementary body (EB), and a larger fragile intracellular replicative form called the reticulate body (RB). The EB is a metabolically inert form that neither expends energy nor synthesizes protein. The cycle begins when the EB attaches to the plasma membrane of susceptible target cells and induces its own endocytosis. This is accomplished in part by the secretion of a preformed translocated actin recruiting protein (Tarp) which induces actin cytoskeletal rearrangements in the target cell. Utilizing stores of ATP the EB then begins the process of converting to the replicative RB. With inhibition of lysosomal fusion in the host cell, the organism forms its own membrane-bound vesicle called the inclusion. After RBs increase in number, the process reverses and the RBs reorganize and condense to yield multiple EBs. They are then released by exocytosis, extrusion of intact inclusions, or cell lysis to infect adjacent cells. The efficiency of this cycle is optimized by a chlamydial protease-like activity factor (CPAF) which regulates cellular apoptosis signals. In the growth phase apoptosis is inhibited, but at the release stage cell death proceeds. Both Tarp and CPAF are injected by secretion systems (type III). Tarp is injected across the plasma membrane, CPAF across the inclusion membrane. A variant in the overall replicative cycle is called the persistent state in which the EBs and RBs become dormant but are still able to resume multiplication. This state can be induced by some cytokines (IFN-γ), nutrient restriction, and interestingly, penicillin. As indicated earlier, Chlamydia lack the peptidoglycan target of penicillin but still have a set of genes for its synthesis.

Chlamydia trachomatis primarily produces infections of the conjunctiva or genital tract which vary depending on the biovar involved. Trachoma is a progressive conjunctivitis with inflammation and scarring leading to blindness. Genital biovars are the most common cause of sexually transmitted urethritis, cervicitis, and salpingitis. When inoculated in the eye they cause acute conjunctivitis; when aspirated by newborns they cause pneumonia. Lymphogranuloma venerum biovars cause localized, ulcerative genital lesions with spread to regional lymph nodes.

Chlamydia trachomatis causes disease in several sites, primarily the conjunctiva and genital tract. In its various forms, this infection is one of the most frequent in the world with an estimated 100 million new cases each year. Humans are the sole reservoir. Inclusion conjunctivitis is seen among population groups in which the strains causing C trachomatis genital infections are common. Chlamydia trachomatis also causes a common form of neonatal conjunctivitis when the newborn comes in direct contact with infective cervical secretions of the mother at delivery.

Trachoma, a chronic follicular conjunctivitis, afflicts an estimated 500 million persons worldwide and blinds 7 to 9 million, particularly in Africa. The disease is usually contracted in infancy or early childhood from the mother or other close contacts. Spread is by contact with infective human secretions, directly via hands to the eye or via fomites transmitted on the legs of flies.

Fomites, fingers, and flies involved in transmission of trachoma

The prevalence of chlamydial urethral infection in US men and women ranges from 5% in the general population to 20% in those attending sexually transmitted disease clinics. Approximately one-third of male sexual contacts of women with C trachomatis cervicitis develop urethritis after an incubation period of 2 to 6 weeks. The proportion of men with mild to absent symptoms is higher than in gonorrhea.

Chlamydiae have a tropism for columnar epithelial cells of the endocervix and upper genital tract of women (Figure 39–2), and the urethra, rectum, and conjunctiva of both sexes. Depending on the biovar a wide range of other cells may be infected including endothe-lium, smooth muscle, lymphocytes, and macrophages. Initial attachment is probably mediated by MOMP and possibly other outer membrane proteins followed by cellular invasion by the mechanisms described above. The LGV biovars can also enter through breaks in the skin or mucosa. Once the replication cycle is established, the primary injury is due to inflammation secondary to the release of proinflammatory cytokines such as interleukin-8 by infected epithelial cells. Chlamydial lipopolysaccharides probably also play an important role in initiation of the inflammatory process. This results in early tissue infiltration by polymorphonuclear leukocytes, later followed by lymphocytes, macrophages, plasma cells, and eosinophils. If the infection progresses further (because of lack of treatment and/or failure of immune control), aggregates of lymphocytes and macrophages may form in the submucosa; these can progress to necrosis, followed by fibrosis and scarring. The chronic progressive inflammation with scarring seen in trachoma is due to persistent or recurrent infections over many years beginning in childhood. In the later stages the process may be primarily immunopathologic. Live Chlamydia may not be present and inflammation can be triggered by C trachomatis antigens to which the patient has been sensitized. 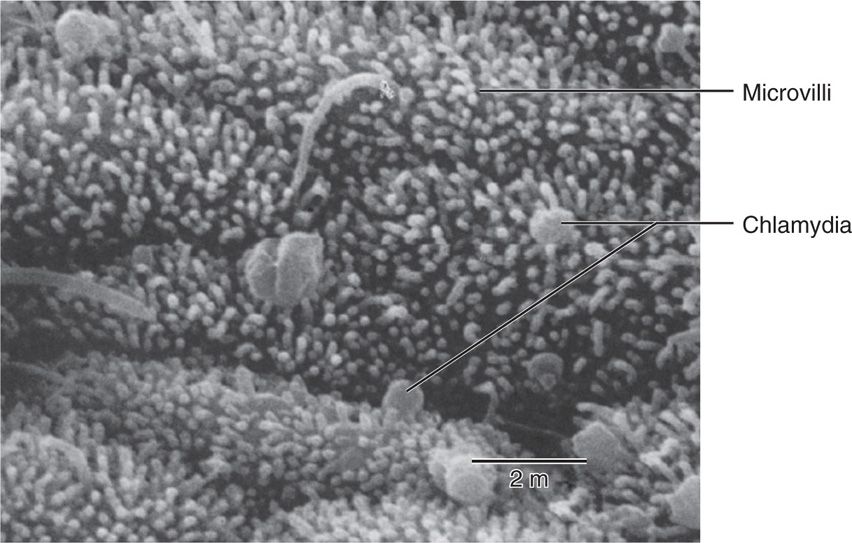 Later development of fibrosis and scarring

Persistent or recurrent infections cause trachoma

Immunity to C trachomatis infections seems to take a long time to develop and even then is incomplete. Up to 50% of women with genital infection may still be shedding the organism a year later. The intracellular location and the prospect that low levels of cytokines may induce the persistent state are complicating features. TH1 responses seem to be the most protective. TH2 responses directed at MOMP may participate as well but antibody is also associated with immunopathologic injury in the chronic forms like trachoma.

TH1 responses are most protective

Trachoma and inclusion conjunctivitis due to different serotypes

Chronic inflammation of the eyelids and increased vascularization of the corneal conjunctiva are followed by severe corneal scarring and conjunctival deformities (Figure 39–3). Visual loss often occurs 15 to 20 years after the initial infection as a result of repeated scarring of the cornea. 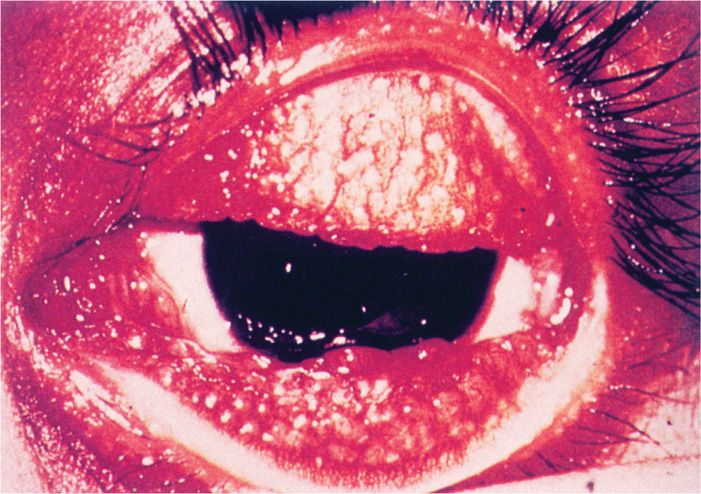