Mycoplasma and Ureaplasma are taxonomically placed in the Mollicutes, a class of prokaryotes that lack a cell wall. Although their DNA does not resemble any other prokaryote, evolutionary studies suggest they are derived from Gram-positive bacteria by reductive evolution. They are very small (diameter 0.2-0.3 μm), but highly plastic and pleomorphic appearing as coccoid bodies, filaments, and bottle-shaped forms. The cells are bounded only by a single trilaminar membrane (Figure 38–1), which, unlike bacteria, contains sterols. The sterols are not synthesized by the organism, but are acquired as essential components from the medium or tissue in which the organism is growing. Flagella and pili are lacking but surface organelles mediating attachment have been identified for some species. Lacking a cell wall, Mycoplasma and Ureaplasma stain poorly or not at all with the usual stains. Their double-stranded DNA genome is small, in part due to the lack of genes encoding a complex cell wall. Mycoplasma pneumoniae is an aerobe, but most other species are facultatively anaerobic. All grow slowly in enriched liquid culture medium and on special Mycoplasma agar to produce minute colonies only after several days of incubation. For some, the center of the colony grows into the agar and appears denser, giving the appearance of an inverted “fried egg.” 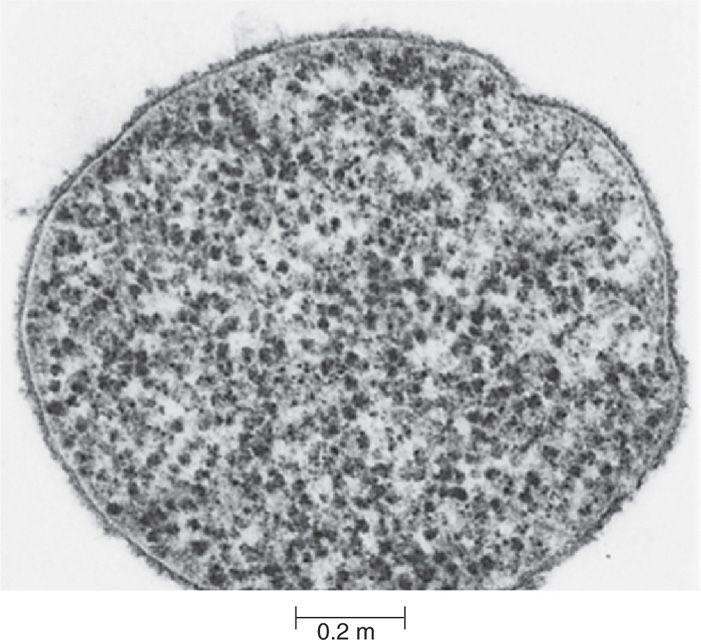 Not stained well by common methods

In addition to the general features of Mycoplasma, M pneumoniae has a terminal organelle which is a membrane-bound protrusion of the cytoplasm capped by a button. This structure contains a number of proteins (P1, P30) which are involved in attachment to cell surfaces. It also mediates a form of movement called gliding motility in which the organism advances over smooth surfaces in the direction of the protrusion. Mycoplasma pneumoniae also produces an ADP-ribosylating toxin called the Community Associated Respiratory Distress Syndrome (CARDS) toxin. In the laboratory, colonies of M pneumoniae bind red blood cells (RBCs) onto the surface of agar plate cultures (hemadsorption). This is due to binding by the mycoplasma to sialic acid-containing oligosaccharides present on the RBC surface.

Mycoplasma pneumoniae produces a common form of pneumonia, which tends to occur in any season and has a predilection for younger persons. The illness is characterized by a nonproductive cough, fever, and headache, with radiologic and clinical evidence of scattered areas of pneumonia. The course is almost always benign, but improvement is accelerated by treatment with non–cell wall–active antimicrobials.

Mycoplasma pneumoniae accounts for approximately 10% of all cases of pneumonia. Infection is acquired by droplet spread. Experimental challenges indicate that the human infectious dose is very low, possibly less than 100 organisms. Infections with M pneumoniae occur worldwide, but they are especially prominent in temperate climates. Epidemics at 4- to 6-year intervals have been noted in both civilian and military populations. The most common age range for symptomatic M pneumoniae infection is between 5 and 15 years, and the disease accounts for more than one-third of all cases of pneumonia in teenagers (but is also seen in older persons). Infections in children younger than 6 months are uncommon. The disease often appears as a sporadic, endemic illness in families or closed communities because its incubation period is relatively long (2-3 weeks) and because prolonged shedding in nasopharyngeal secretions may cause infections to be spread over time. In families, attack rates in susceptible persons approach 60%. Asymptomatic infections occur, but most studies have suggested that more than two-thirds of infected cases develop some evidence of respiratory tract illness.

Found worldwide most often in teenagers

Mycoplasma pneumoniae infection involves the trachea, bronchi, bronchioles, and peri-bronchial tissues and may extend to the alveoli and alveolar walls. The organism appears to thrive on the phospholipids present in lung epithelia. Initially, M pneumoniae attaches to the cilia and microvilli of the cells lining the bronchial epithelium. This attachment is mediated by protrusion-associated proteins (P1, P30) which bind to complex oligosaccharides containing sialic acid found in the apical regions of bronchial epithelial cells (Figure 38–2). The oligosaccharide receptors are chemically similar to antigens on the surface of erythrocytes and are not found on the nonciliated goblet cells or mucus, to which M pneumoniae does not bind. Other proteins bind to elements of the extracellular matrix like fibronectin. The CARDS toxin interferes with ciliary action and causes nuclear vacuolization and fragmentation of tracheal epithelial cells. This leads to inflammation and desquamation of the involved mucosa (Figure 38–3). The inflammatory response is most pronounced in the bronchial and peribronchial tissue and is composed of lymphocytes, plasma cells, and macrophages, which may infiltrate and thicken the walls of the bronchioles and alveoli. Organisms are shed in upper respiratory secretions for 2 to 8 days before the onset of symptoms, and shedding continues for as long as 14 weeks after infection. 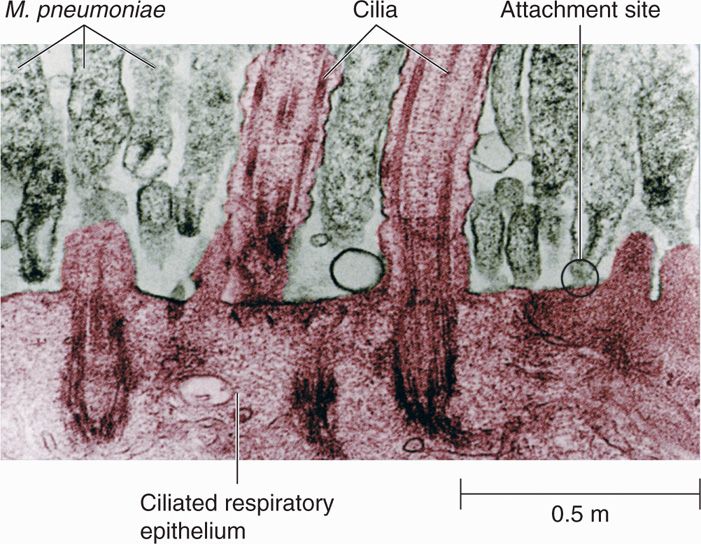 FIGURE 38–2. Mycoplasma pneumoniae infecting respiratory epithelium. Transmission electron micrograph. Note the distinctive appearance of the tips of the mycoplasmas adjacent to the host epithelium. The tips probably represent a site on the microorganism that is specialized for attachment. (Reproduced with permission from Nester EW: Microbiology: A Human Perspective, 6th edition. 2009.)