36 Plague and Other Bacterial Zoonotic Diseases

Brucella species are small, coccobacillary, Gram-negative rods that morphologically resemble Haemophilus and Bordetella. They are nonmotile, non-acid-fast, and non-spore-forming. The cells have a typical Gram-negative structure, and the outer membrane contains proteins. The genus Brucella contains nine closely related variants that differ primarily in their preferred terrestrial or marine hosts. Taxonomists vacillate as to whether they should be called species or something else. The three most commonly infecting humans, B abortus (cattle), B melitensis (sheep, goats), and B suis (swine), will all be referred to here as Brucella abortus or simply Brucella. Their growth is slow, requiring at least 2 to 3 days of aerobic incubation in enriched broth or on blood agar. They produce catalase, oxidase, and urease, but do not ferment carbohydrates. The lipid composition of the Brucella envelope is unusual in that the dominant phospholipid component (phosphatidylcholine) is more typical of eukaryotic than bacterial cells.

Brucellosis is a genitourinary infection of sheep, cattle, pigs, and other animals. Humans such as farmers, slaughterhouse workers, and veterinarians become infected directly by occupational contact or indirectly by consumption of contaminated animal products such as milk. In humans, brucellosis is a chronic illness characterized by fever, night sweats, and weight loss lasting weeks to months. Because the infection is localized in reticuloendothelial organs, there are few physical findings unless the liver or spleen becomes enlarged. When patients develop a cycling pattern of nocturnal fevers, the disease has been called undulant fever.

Brucellosis, a chronic infection that persists for life in animals, is an important cause of abortion, sterility, and decreased milk production in cattle, goats, and hogs. It is spread among animals by direct contact with infected tissues and ingestion of contaminated feed; it causes chronic infection of the mammary glands, uterus, placenta, seminal vesicles, and epididymis.

Humans acquire brucellosis by occupational exposure or consumption of unpasteurized dairy products. The bacteria may gain access through cuts in the skin, contact with mucous membranes, inhalation, or ingestion. In the United States, the number of cases has dropped steadily from a maximum of more than 6000 per year in the 1940s to the current level of less than 100 per year. Of these cases, 50% to 60% are in abattoir employees, government meat inspectors, veterinarians, and others who handle livestock or meat products. Consumption of unpasteurized dairy products, which accounts for 8% to 10% of infections, is the leading source in persons who have no connection with the meat-processing or livestock industries. Some recent cases of this type have been associated with “health” foods. In the United States, the distribution of human cases of brucellosis includes virtually every state, but is concentrated in those with large livestock industries or in those in proximity to Mexico (California, Texas). An outbreak in Texas was traced to unpasteurized goat cheese brought in from Mexico.

Unpasteurized dairy products and “health” foods are a risk

All Brucella are facultative intracellular parasites of epithelial cells and professional phagocytes. After they penetrate the skin or mucous membranes, they are able to evade aspects of the innate immune system, particularly toll-like receptors (TLRs). This may be due to the more eukaryotic than prokaryotic nature of their outer membrane lipids. Once past the epithelial and innate immune barriers they enter and multiply in macrophages in the liver sinusoids, spleen, bone marrow, and other components of the reticuloendothelial system and eventually form granulomas (Figure 36–1). Intracellular survival is facilitated by inhibition of both the myeloperoxidase system and of phagosome-lysosome fusion. This is accompanied by multiplication in their own replicative compartment in association with the endoplasmic reticulum (ER). This intracellular strategy includes a contact secretion system (type IV) and is similar to that of Legionella pneumophila (Chapter 34). Brucella is also able to inhibit apoptosis, thus prolonging the life of the host cell where it is replicating. In cows, sheep, pigs, and goats, erythritol, a four-carbon alcohol present in chorionic tissue, markedly stimulates growth of Brucella. This stimulation probably accounts for the tendency of the organism to locate in these sites. The human placenta does not contain erythritol. 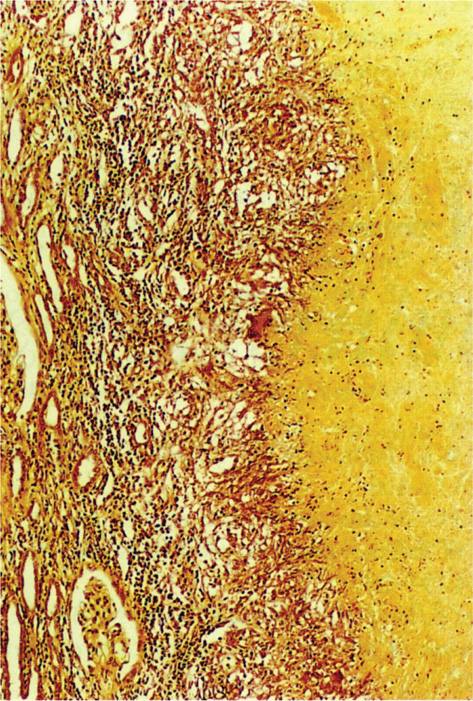 FIGURE 36–1. Brucellosis. Caseating granuloma in the kidney of a midwestern cattle farmer The giant and epithelioid cells are pallisaded around the caseating area on the right. Glomeruli are compressed on the left. (Reproduced with permission from Connor DH, Chandler FW, Schwartz DQ, et al: Pathology of Infectious Diseases. Stamford CT: Appleton & Lange, 1997.)

Evades TLRs and multiplies in macrophages

If not controlled locally, infection progresses with the formation of small granulomas in the reticuloendothelial sites of bacterial multiplication and with release of bacteria back into the systemic circulation. These bacteremic episodes are largely responsible for the recurrent chills and fever of the clinical illness. These events resemble the pathogenesis of typhoid fever (see Chapter 33).

Although antibodies are formed in the course of brucellosis, there is little evidence that they are protective. Control of disease is due to T-cell-mediated cellular immune responses. Development of TH1-type responses with the production of cytokines (tumor necrosis factors [TNF-α, TNF-γ, IL-1] and interleukin [IL-12]) are associated with the elimination of Brucella from macrophages.

Brucellosis starts with malaise, chills, and fever 7 to 21 days after infection. Drenching sweats in the late afternoon or evening are common, as are temperatures in the range of 39.4°C to 40°C. The pattern of periodic nocturnal fever (undulant fever) typically continues for weeks, months, or even 1 to 2 years. Patients become chronically ill with associated body aches, headache, and anorexia. Weight loss of up to 20 kg may occur during prolonged illness. Despite these dramatic effects, physical findings and localizing signs are few. Less than 25% of patients show detectable enlargement of the fixed macrophage or reticuloendothelial organs, the primary site of infection. Of such findings, splenomegaly is most common, followed by lymphadenopathy and hepatomegaly. Occasionally, localized infection develops in the lung, bone, brain, heart, or genitourinary system. These cases usually lack the pronounced systemic symptoms of the typical illness.

Definitive diagnosis of brucellosis requires isolation of Brucella from the blood or from biopsy specimens of the liver, bone marrow, or lymph nodes. The slow growth of some strains requires prolonged incubation of culture media to achieve isolation. Blood cultures may require several weeks for growth, although almost all are positive in 2 to 5 days with newer automated systems. The diagnosis is often made serologically, but is subject to the same interpretive constraints as are all serologic tests. Antibodies that agglutinate suspensions of heat-killed organisms typically reach titers of 1:640 or more in acute disease. Lower titers may reflect previous disease or cross-reacting antibodies. Titers return to the normal range within 1 year of successful therapy.

Serologic tests may be useful

Doxycycline in combination with rifampin or gentamicin is the primary treatment for brucellosis. Ciprofloxacin, and trimethoprim-sulfamethoxazole are also used in combinations. Although β-lactams may be active in vitro, clinical response is poor, probably as a result of failure to penetrate the intracellular location of the bacteria. The therapeutic response is not rapid; 2 to 7 days may pass before patients become afebrile. Up to 10% of patients have relapses in the first 3 months after therapy. Prevention is primarily by measures that minimize occupational exposure and by the pasteurization of dairy products. Control of brucellosis in animals involves a combination of immunization with an attenuated strain of B abortus and eradication of infected stock. No human vaccine is in use.

Doxycycline plus rifampin is therapy of choice

Yersinia pestis is a nonmotile, non-spore-forming, Gram-negative bacillus with a tendency toward pleomorphism and bipolar staining. It is a member of the Enterobacteriaceae family (Chapter 33) and shares features of the other Yersinia pathogenic for humans (Y pseu-dotuberculosis, Y enterocolitica), such as virulence plasmids and multiple Yersinia outer membrane proteins (Yops). In addition, Ypestis has two virulence plasmids, which code for a glycoprotein gel-like capsule called the F1 antigen and enzymes with phospholipase, protease, fibrinolytic, and plasminogen-activating activity. Yersinia pestis also has its own adhesin similar to the invasins of the other Yersinia.

Plague, an infection of rodents transmitted to humans by the bite of infected fleas, is the most explosively virulent disease known. Most cases begin with a painful swollen lymph node (bubo) from which the bacteria rapidly spread to the bloodstream. Plague pneumonia (Black Death) is produced by pulmonary seeding from the bloodstream or directly from another patient with hemorrhagic pneumonia. All forms cause a toxic picture with shock and death within a few days. No other disease regularly kills previously healthy persons so rapidly.

The term plague is often used generically to describe any explosive pandemic disease with high mortality. Medically, it refers only to infection caused by Y pestis, and this appellation was justly earned because Y pestis was the cause of the most virulent epidemic plague of recorded human history, the Black Death of the Middle Ages. In the 14th century, the estimated population of Europe was 105 million; between 1346 and 1350, 25 million died of plague. Pandemics continued through the end of the 19th century and the early 20th century despite elaborate quarantine measures developed in response to the obvious communicability of the disease. Yersin isolated the etiologic agent in China in 1894 and named it after his mentor, Pasteur (Pasteurella pestis). The name was later changed to honor Yersin (Yersinia pestis).

Plague is a disease of rodents transmitted by the bite of rat fleas (Xenopsylla cheopis) that colonize them. It exists in two interrelated epidemiologic cycles, the sylvatic and the urban (Figure 36–2). Endemic transmission among wild rodents in the sylvatic (Latin sylvaticus, belonging to or found in the woods) is the primary reservoir of plague. When infected rodents enter a city, circumstances for the urban cycle are created. Humans can enter the cycle from the bite of the flea in either environment. However, chances are greater in the urban setting, particularly with crowding and poor sanitation. 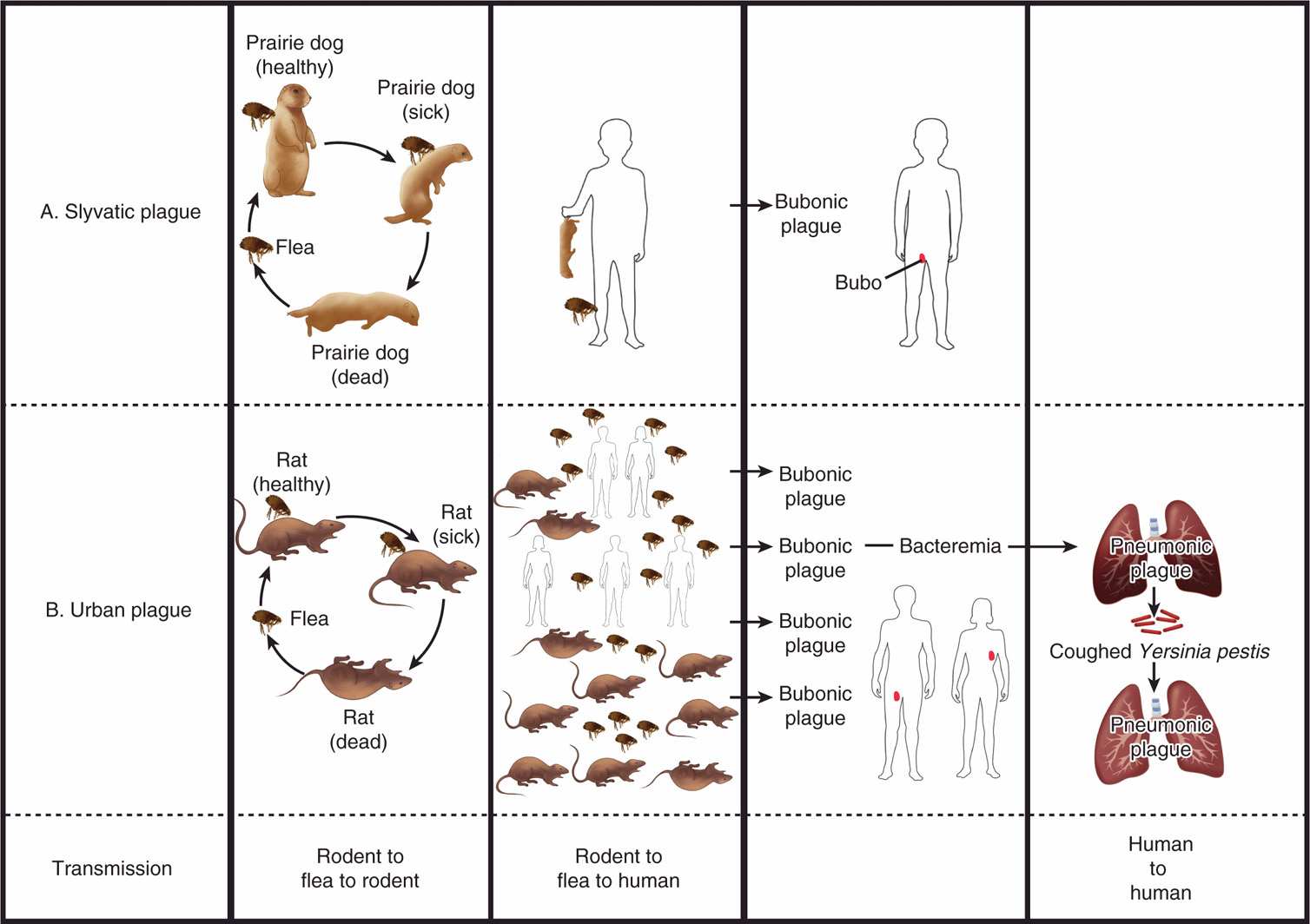 FIGURE 36–2. The epidemiology of plague. A. In the sylvatic cycle, fleas leaving infected rodents, such as mice and prairie dogs, pass the infection to others in the population. Humans rarely contact these rodents but when they do, the flea bite transmits plague. B. In the urban cycle, masses of rats are in closer contact with humans, and bites from infected fleas transmit the infection to many. In both cycles, initial transmissions result in bubonic plague. Bacteremia with Y pestis may infect the lungs to cause pneumonic plague. Pneumonic plague is transmitted human to human by the respiratory route without the involvement of fleas.