35 Pseudomonas and Other Opportunistic Gram-negative Bacilli

Pseudomonas aeruginosa is an aerobic, motile, Gram-negative rod that is slimmer and more pale staining than members of the Enterobacteriaceae. Its most striking bacteriologic feature is the production of colorful water-soluble pigments. Pseudomonas aeruginosa also demonstrates the most consistent resistance to antimicrobial agents of all the medically important bacteria.

Pigment-producing rod is resistant to many antimicrobics

Pseudomonas aeruginosa is sufficiently versatile in its growth and energy requirements to use simple molecules such as ammonia and carbon dioxide as sole nitrogen and carbon sources. Thus, it does not require enriched media for growth and can survive and multiply over a wide temperature range (20–42°C) in almost any environment, including one with a high salt content. The organism uses oxidative energy-producing mechanisms and has high levels of cytochrome oxidase (oxidase-positive). Although an aerobic atmosphere is necessary for optimal growth and metabolism, most strains multiply slowly in an anaerobic environment if nitrate is present as an electron acceptor.

Growth on all common isolation media is luxurious, and colonies have a delicate, fringed edge. Confluent growth often has a characteristic metallic sheen and emits an intense “fruity” odor. Hemolysis is usually produced on blood agar. The positive oxidase reaction of P aeruginosa differentiates it from the Enterobacteriaceae, and its production of blue, yellow, or rust-colored pigments differentiates it from most other Gram-negative bacteria. The blue pigment, pyocyanin, is produced only by P aeruginosa. Fluorescin, a yellow pigment that fluoresces under ultraviolet light is produced by P aeruginosa and other free-living less pathogenic Pseudomonas species. Pyocyanin and fluorescin combined produce a bright green color that diffuses throughout the medium.

Lipopolysaccharide (LPS) is present in the outer membrane, as are porin proteins, which differ from those of the Enterobacteriaceae family in offering much less permeability to a wide range of molecules, including antibiotics. Pili composed of repeating monomers of the pilin structural subunit extend from the cell surface. A single polar flagellum rapidly propels the organism and assists in binding to host tissues.

A mucoid exopolysaccharide slime layer is present outside the cell wall in some strains. This layer is created by secretion of alginate, a copolymer of mannuronic and glucuronic acids. It is created by the action of several enzymes that effectively channel carbohydrate intermediates into the alginate polymer. All P aeruginosa produce moderate amounts of alginate, but those with mutations in regulatory genes overproduce the polymer. These mutants appear as striking mucoid colonies in cultures from the respiratory tract of patients with cystic fibrosis.

Overproduction is due to regulatory mutations

Most strains of P aeruginosa produce multiple extracellular products, including exotoxin A (ExoA) and other enzymes with phospholipase, collagenase, adenylate cyclase, or elastase activity. ExoA is a secreted protein that inactivates eukaryotic elongation factor 2 (EF-2) by ADP-ribosylation (ADPR). This arrests translation leading to shutdown of protein synthesis and cell death. Although this action is the same as diphtheria toxin, the two toxins are otherwise unrelated. The elastase acts on a variety of biologically important substrates, including elastin, human IgA and IgG, complement components, and some collagens. Exoenzyme S (ExoS) and a number of other proteins (ExoT, ExoY, ExoU) are transported directly into host cells by an injection (type III) secretion system. Inside the cell, ExoS acts on regulatory G proteins affecting the cytoskeleton, signaling pathways, and inducing apoptosis.

Pseudomonas aeruginosa produces infection at a wide range of pulmonary, urinary, and soft tissue sites, much like the opportunistic Enterobacteriaceae. The clinical manifestations of these infections reflect the organ system involved and are not unique for Pseudomonas. However, once established, infections are particularly virulent and difficult to treat. Affected patients almost always have some form of debilitation or compromise of immune defenses.

The primary habitat of P aeruginosa is the environment. It is found in water, soil, and various types of vegetation throughout the world. Pseudomonas aeruginosa has been isolated from the throat and stool of 2% to 10% of healthy persons. Colonization rates may be higher in hospitalized patients. Infection with P aeruginosa, rare in previously healthy persons, is one of the most important causes of invasive infection in hospitalized patients with serious underlying disease, such as leukemia, cystic fibrosis (CF), and extensive burns (Figure 35–1). 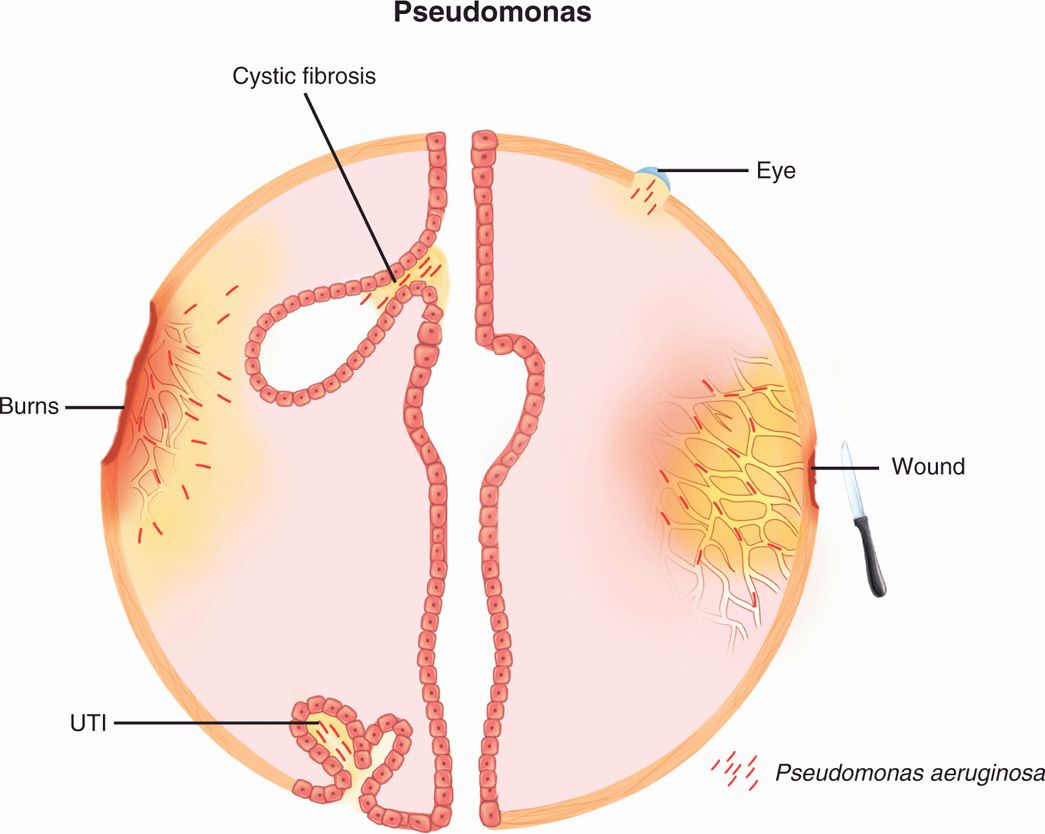 FIGURE 35–1. Pseudomonas disease overview. P aeruginosa is a leading cause of opportunistic infection in the eye (contact lenses), wounds, urinary tract, and burns. In a special situation it colonizes the respiratory tract of persons with cystic fibrosis by formation of a biofilm (see Figure 35–4). UTI, urinary tract infection.

The ability of P aeruginosa to survive and proliferate in water with minimal nutrients can lead to heavy contamination of any nonsterile fluid, such as that in the humidifiers of respirators. Inhalation of aerosols from such sources can bypass the normal respiratory defense mechanisms and initiate pulmonary infection. Infections have resulted from the growth of Pseudomonas in medications, contact lens solutions, and even some disinfectants. Sinks and faucet aerators may be heavily contaminated and serve as the environmental source for contamination of other items. The presence of P aeruginosa in drinking water or food is not a cause for alarm. The risk lies in the proximity between items susceptible to contamination and persons uniquely predisposed to infection.

Multiplies in humidifiers, solutions, and medications

Risk for immunocompromised persons is high

Pseudomonas aeruginosa is now the most common bacterial pathogen to complicate the management of patients with cystic fibrosis (CF), an inherited defect in chloride ion transport that leads to a buildup of thick mucus in ducts and the tracheobronchial tree. In a high percentage of cases, the respiratory tract becomes colonized with P aeruginosa, which, once established, becomes almost impossible to eradicate. This infection is a leading cause of morbidity and eventual death of these patients.

Although P aeruginosa is an opportunistic pathogen, it is one of particular virulence. The organism usually requires a significant break in first-line defenses (such as a wound) or a route past them (such as a contaminated solution or intratracheal tube) to initiate infection. Attachment to epithelial cells is the first step in infection and is likely mediated by pili, flagella, and the extracellular polysaccharide slime. The receptors include sialic acid and N-acetylglucosamine borne by cell surface glycolipids. Attachment is favored by loss of surface fibronectin, which explains in part the propensity for debilitated persons.

Once established, the virulence of P aeruginosa seems obvious, given its myriad enzymes and other factors (Figure 35–2). The importance of ExoA is supported by studies in humans and animals, which correlate its presence with a fatal outcome and an antibody against it with survival. The effect of ExoA is not immediate, since it is one of a number of virulence factors activated through a gene-regulating system called quorum-sensing. Under these conditions lactones and/or quinolones secreted by P aeruginosa signal their presence to the other bacterial cells. The system is quantitative so when the Pseudomonas cell population reaches a certain threshold, the signals direct the cytotoxin gene to be transcribed, and the toxin is then produced by the entire population at once. No diphtheria-like systemic effect of ExoA has been demonstrated, but its action correlates with the primarily invasive and locally destructive lesions seen in P aeruginosa infections. 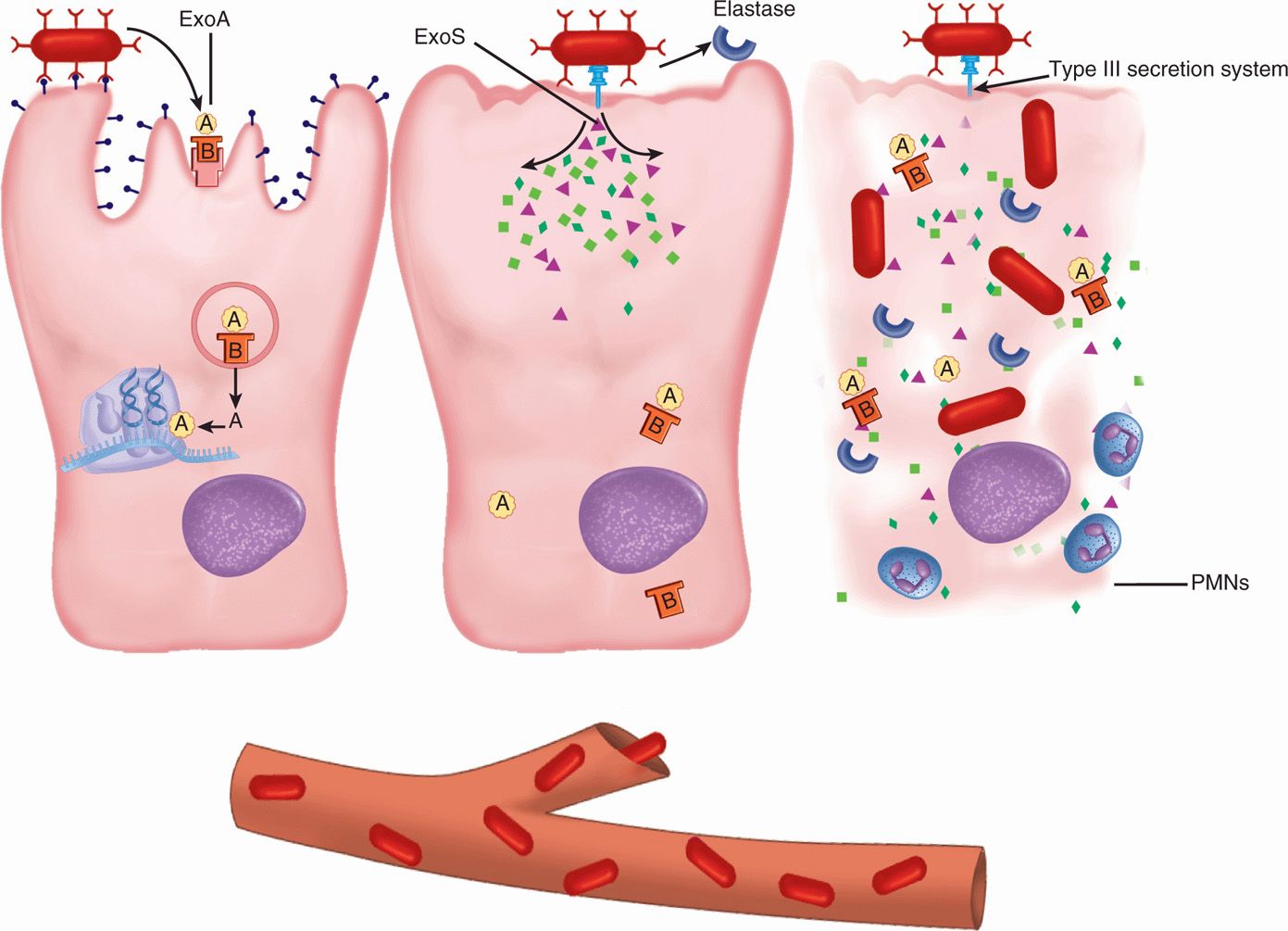 FIGURE 35–2. Pseudomonas disease, cellular view. (Left) P aeruginosa binds and secretes the A-B exotoxin A (ExoA), which acts on protein synthesis by the same mechanism as diphtheria toxin. (Middle) A type III injection secretion system delivers exoenzyme S (ExoS) to the cell cytoplasm. Elastase is secreted extracellularly. (Right) All toxins act to destroy the cell and the bacteria may enter the blood.

The elastase and phospholipase degrade proteins and lipids, respectively, allowing the organism to acquire nutrients from the host and disseminate from the local site. The many biologically important substrates of elastase argue for its importance, particularly its namesake, elastin. Elastin is found at some sites that P aeruginosa preferentially attacks, such as the lung and blood vessels. Hemorrhagic destruction, including the walls of blood vessels (Figure 35–3), is the histologic hallmark of Pseudomonas infection. The intracellu-lar dysfunction caused by ExoS and other factors injected by the secretion system begin immediately upon contact with the host cell. ExoS is associated with dissemination from burn wounds and with actions destructive to cells, including its action on the cytoskeleton. 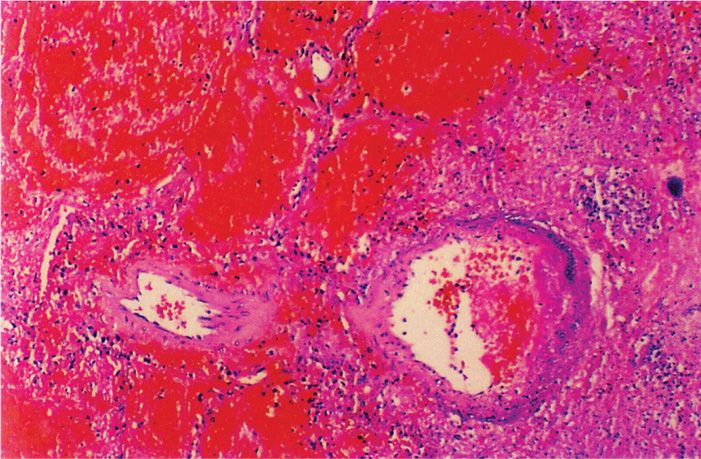 FIGURE 35–3. Pseudomonas aeruginosa pneumonia. This blood vessel in the lung of a fatal case is infected with P aeruginosa and is undergoing destruction. A thrombus is forming in the lumen as well. (Reproduced with permission from Connor DH, Chandler FW, Schwartz DQ, et al: Pathology of Infectious Diseases. Stamford CT: Appleton & Lange, 1997.)