Legionella pneumophila is a thin, pleomorphic, Gram-negative rod that may show elongated, filamentous forms up to 20 μm long. In clinical specimens, the organism stains poorly or not at all by Gram stain or the usual histologic stains; however, it can be demonstrated by certain silver impregnation methods (Dieterle stain) and by some simple stains without decolorization steps. Polar, subpolar, and lateral flagella may be present. Most species of Legionella are motile. Spores are not found.

Gram-negative rod that stains with difficulty

Structurally, L pneumophila has features similar to those of Gram-negative bacteria with a typical outer membrane, thin peptidoglycan layer, and cytoplasmic membrane. The toxicity of L pneumophila lipopolysaccharide (LPS) is significantly less than that of other Gram-negative bacteria such as Neisseria and the Enterobacteriaceae. This has been attributed to chemical makeup of the LPS side chains which renders the cell surface highly hydrophobic, a property which may promote distribution in aerosols.

LPS is less toxic than that of most Gram-negative species

Side chains are hydrophobic

Legionella is a facultative intracellular pathogen multiplying to high numbers inside free-living amoebas, other protozoa, and macrophages. In human-made water systems the organisms persist in a low metabolic state imbedded in biofilms. In vitro L pneumophila fails to grow on common enriched bacteriologic media such as blood agar due to requirements for certain amino acids (L-cysteine), ferric ions, and slightly acidic conditions (optimal pH 6.9). Even when these requirements are met, growth under aerobic conditions is slow, requiring 2 to 5 days to produce colonies that have a distinctive surface resembling ground glass. Although a few enzymatic actions (catalase, oxidase, β-lactamase) are demonstrable, the classification of Legionella depends largely on antigenic features, chemical analysis, and nucleic acid homology comparisons. The closest relative among pathogenic bacteria is Coxiella burnettii (see below).

Classification based on antigenic structure and nucleic acid homology

Legionella pneumophila has multiple serogroups (16) and there are over 50 other Legionella species (eg, L longbeachae, L bozemanii, L dumoffii, L micdadei). The original Philadelphia strain (serogroup 1) is still the most common, and a limited number of L pneumophila serogroups account for 80% to 90% of cases. This suggests enhanced virulence for humans, as L pneumophila’s frequency among species found in the environment is below 30%. Less than half of the non-L pneumophila species have been isolated from human infections.

Legionella are inhaled into the lung from an aquatic source in the environment. Once there, they produce a destructive pneumonia marked by headache, fever, chills, dry cough, and chest pain. Although there may be multiple foci in both lungs and extension to the pleura, spread outside the respiratory tree is very rare.

The widely publicized outbreak of pneumonia among attendees of the 1976 American Legion convention in Philadelphia led to the isolation of a previously unrecognized infectious agent, L pneumophila. The event was unique in medical history. For months the American public entertained theories of its cause that ranged from chemical sabotage to viroids and fears that something like Michael Crichton’s 1969 novel The Andromeda Strain was ahead. It was almost a letdown to find that a Gram-negative rod that could not be stained or grown by the common methods was responsible. The Centers for Disease Control investigation was an outstanding example of the benefits of pursuing sound epidemiologic evidence until it is explained by equally sound microbiologic findings. We now know the disease had occurred for many years. Specific antibodies and organisms have been detected in material preserved from the 1950s, and a mysterious hospital outbreak in 1965 has been solved retrospectively by examination of preserved specimens. Today, most cases of Legionnaires disease in the United States are caused by just a few L pneumophila sero-types, including the original Philadelphia strain, but there is considerable variation worldwide. In Western Australia, L longbeachae is the predominant species.

Earlier outbreaks have been solved

In nature, Legionella species are ubiquitous in freshwater lakes, streams, and subterres-trial groundwater sediments. They are also found in moist potting soil, mud, and river-banks. In these sites, they also exist as parasites of protozoa including numerous species of amoebas, which appear to be the environmental reservoir. Transmission to humans occurs when aerosols are created in manmade water supplies that harbor Legionella. Most outbreaks have occurred in or around large buildings such as hotels, factories, and hospitals with cooling towers or some other part of an air-conditioning system as the dispersal mechanism. Some hospital outbreaks have implicated respiratory devices and potable water coming from parts of the hot water system such as faucets and shower heads. Even the mists used in supermarkets to make the vegetables look shiny and fresh have been the source of outbreaks. Legionella can persist in a water supply despite standard disinfection procedures, particularly when the water is warm and the pipes contain scale or low-flow areas that compromise chlorine access.

Infections are associated with aerosols distributed by humidifying and cooling systems

It is difficult to ascertain the overall incidence of Legionella infections because most information has been from outbreaks that constitute only a small part of the total cases. Estimates based on seroconversions suggest approximately 25 000 cases in the United States each year. The attack rate among those exposed is estimated at less than 5% and serious cases are generally limited to immunocompromised persons. Person-to-person transmission has not been documented, and the organisms have not been isolated from healthy individuals. Growth in free-living amoebas produces Legionella cells that are more resistant to environmental stress (acid, heat, osmotic) and have enhanced infectivity.

Person-to-person transmission or carriers are unknown

Disease rate among exposed is low

Legionella pneumophila is striking in its propensity to attack the lung, producing a necrotizing multifocal pneumonia. Microscopically, the process involves the alveoli and terminal bronchioles, with relative sparing of the larger bronchioles and bronchi (Figure 34–1). The inflammatory exudate contains fibrin, neutrophils, macrophages, and erythrocytes. A striking feature is the preponderance of bacteria within phagocytes and the lytic destruction of inflammatory cells. 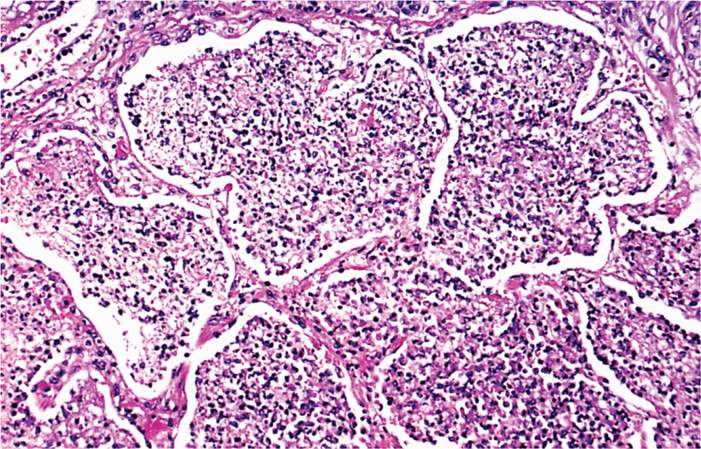 Strong tropism for the lung

Inhaled Legionella bacteria reach the alveoli, where they attach to their pathogenic target the alveolar macrophage. In this process, they are aided by flagella, pili, and a variety of other proteins. Following attachment the bacteria enter the macrophage in an endocytic vacuole. Inside the cell L pneumophila initiates a process which prevents fusion with the lysosome and instead recruits ribosomes, mitochondria, and elements of the host cell endoplasmic reticulum (ER) into its own phagosome called the Legionella-containing vacuole (LCV) (Figure 34–2 A, B). In the LCV niche protected from lysosomal digestion, the organisms multiply to high numbers (Figures 34–2 C, 34–3). They eventually kill the macrophage releasing new cells to repeat the cycle. The multiple enzymes released in this process lead to inflammation, destructive lesions in the lung, and a systemic toxicity that may be related to cytokine release. 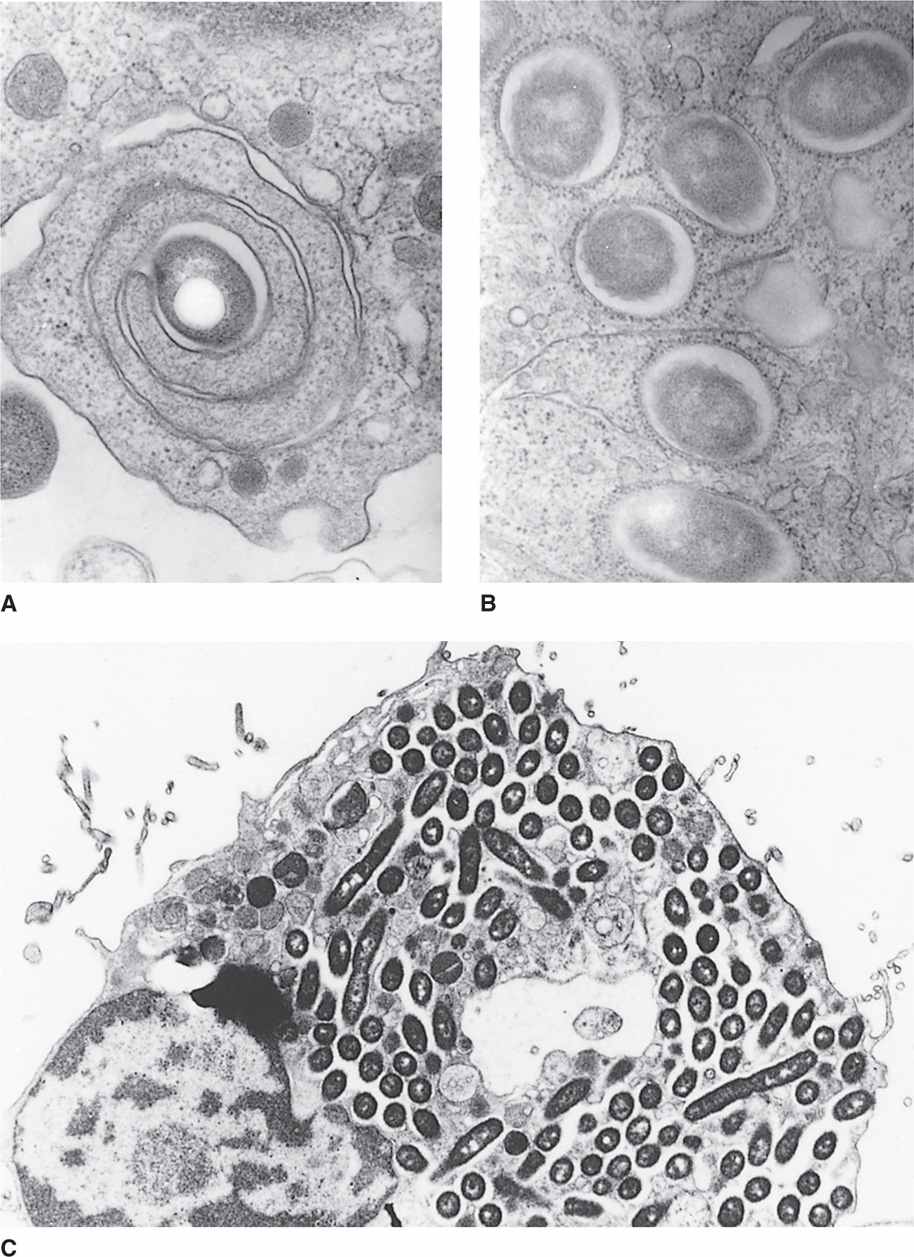 FIGURE 34–2. Multiplication of Legionella pneumophila in human macrophages. A. L pneumophila enters the cell in a phagosome which sometimes has a coiling pattern. B. The new Legionella-containing vacuole (LCV) is lined by ribosomes and mitochondria from the endoplasmic reticulum (ER). C. The bacteria multiply within the macrophages to reach very high numbers. (Courtesy of Dr. Marcus Horwitz.)