Actinomyces are typically elongated Gram-positive rods that branch at acute angles (Figure 28-1). They are Gram-positive bacilli that grow slowly (4-10 days) under micro-aerophilic or strictly anaerobic conditions. In pus and tissues, the most characteristic form is the sulfur granule (Figure 28-2). This yellow-orange granule, named for its gross resemblance to a grain of sulfur, is a microcolony of intertwined branching Actinomyces filaments solidified with elements of tissue exudate. 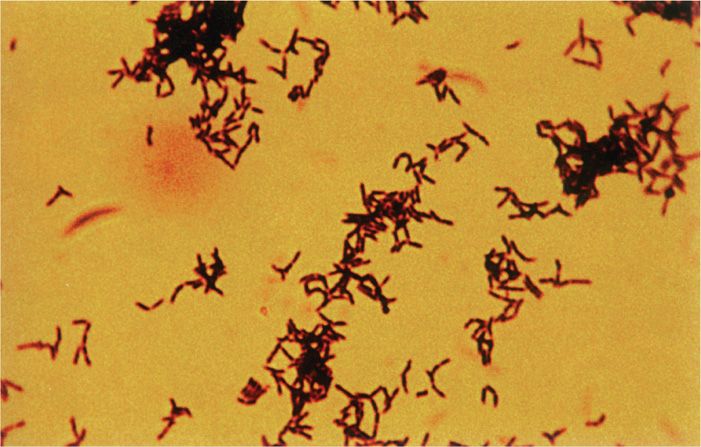 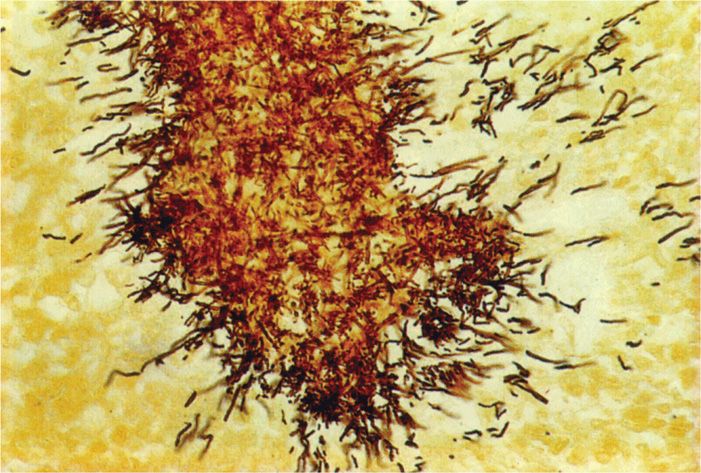 Most infections due to A israelii

Actinomycosis is a chronic inflammatory condition originating in the tissues adjacent to mucosal surfaces. The lesions follow a slow burrowing course with considerable induration and draining sinuses, eventually opening through the skin. The exact nature depends on the organs and structures involved.

Actinomyces are normal inhabitants of some areas of the gastrointestinal tract of humans and animals from the oropharynx to the lower bowel. These species are highly adapted to mucosal surfaces and do not produce disease unless they transgress the epithelial barrier under conditions that produce a sufficiently low oxygen tension for their multiplication (Figure 28-3). Such conditions usually involve mechanical disruption of the mucosa with necrosis of deeper, normally sterile tissues (eg, following tooth extraction). Once initiated, growth occurs in microcolonies in the tissues and extends without regard to anatomic boundaries. The lesion is composed of inflammatory sinuses, which ultimately discharge to the surface. As the lesion enlarges, it becomes firm and indurated. Sulfur granules are present within the pus, but are not numerous. Free Actinomyces or small branching units are rarely seen, although contaminating Gram-negative rods are common. As with other anaerobic infections, most cases are polymicrobial involving other flora from the mucosal site of origin. 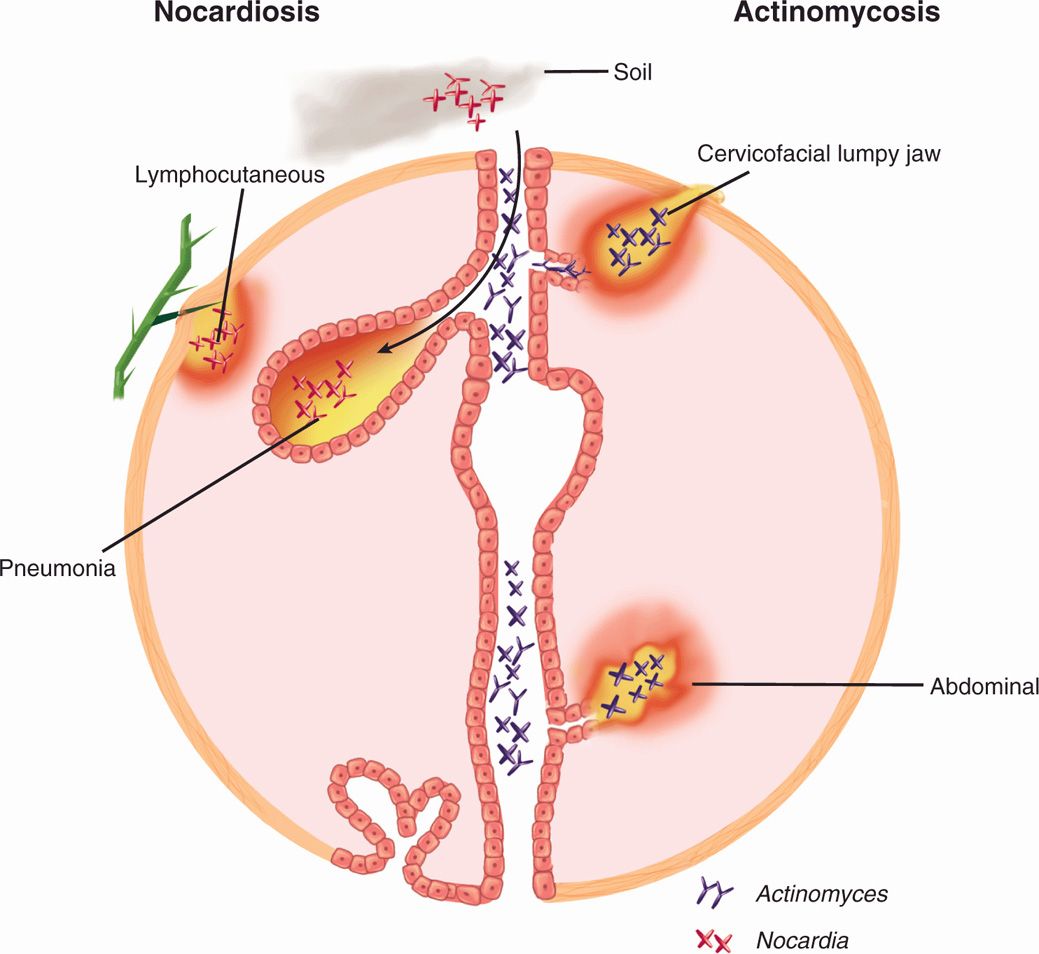 FIGURE 28–3. Actinomycosis and Nocardiosis. (Right) Actinomyces are members of the normal flora throughout the alimentary tract. Minor trauma allows access to tissues where they create burrowing abscesses that may break through to the surface. (Left) Nocardia is present in the soil, where it may be either inhaled to produce a pneumonia or traumatically injected to produce cutaneous pustules and lymphadenitis.

Human cases of actinomycosis provide little evidence of immunity to Actinomyces. Once established, infections typically become chronic and resolve only with the aid of antimicrobial therapy. Antibodies can be detected in the course of infection, but seem to reflect the antigenic stimulation of the ongoing infection rather than immunity. Infections with Actinomyces are endogenous, and case-to-case transmission does not appear to occur.

Actinomycosis exists in several forms that differ according to the original site and circumstances of tissue invasion. Infection of the cervicofacial area, the most common site of actinomycosis (Figure 28-4), is usually related to poor dental hygiene, tooth extraction, or some other trauma to the mouth or jaw. Lesions in the submandibular region and the angle of the jaw give the face a swollen, indurated appearance. 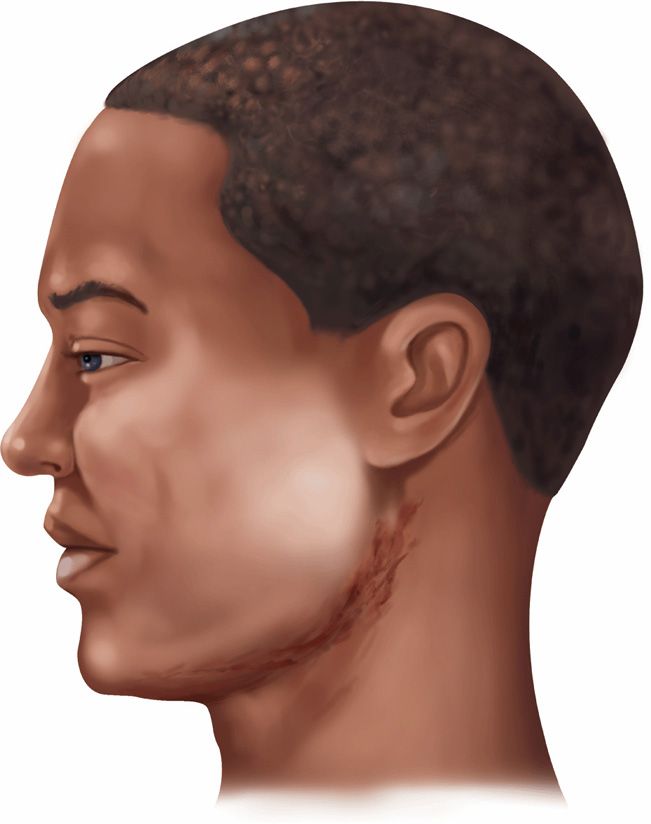 FIGURE 28–4. Cervicofacial actinomycosis. the classic “lumpy jaw” is shown with draining sinuses at the angle of the jaw. the lesion would be very firm on palpation. (reproduced with permission from Connor Dh, Chandler FW, Schwartz DQ, et al: Pathology of Infectious Diseases. Stamford Ct: appleton & Lange, 1997.)

Thoracic and abdominal actinomycoses are rare and follow aspiration or traumatic (including surgical) introduction of infected material leading to erosion through the pleura, chest, or abdominal wall. Diagnosis is usually delayed, because only vague or nonspecific symptoms are produced until a vital organ is eroded or obstructed. The firm, fibrous masses are often initially mistaken for a malignancy. Pelvic involvement as an extension from other sites also occurs occasionally. It is particularly difficult to distinguish from other inflammatory conditions or malignancies. A more localized chronic endometritis, due to Actinomyces, is associated with the use of intrauterine contraceptive devices.

A clinical diagnosis of actinomycosis is based on the nature of the lesion, the slowly progressive course, and a history of trauma or of a condition predisposing to mucosal invasion by Actinomyces. The etiologic diagnosis can be difficult to establish with certainty. Although the lesions may be extensive, the organisms in pus may be few and concentrated in sulfur granule microcolonies deep in the indurated tissue. The diagnosis is further complicated by heavy colonization of the moist draining sinuses with other bacteria, usually Gram-negative rods. This contamination not only causes confusion regarding the etiology but interferes with isolation of the slow-growing anaerobic Actinomyces. Material for direct smear and culture should include as much pus as possible to increase the chance of collecting the diagnostic sulfur granules.

Drainage is often contaminated with other species

Sulfur granules crushed and stained show a dense, Gram-positive center with individual branching rods at the periphery (Figure 28-2). Granules should also be selected for culture, because material randomly taken from a draining sinus usually grows only superficial contaminants. Culture media and techniques are the same as those used for other anaerobes. Incubation must be prolonged, because some strains require 7 days or more to appear. Identification requires a variety of biochemical tests to differentiate Actinomyces from Propionibacteria (anaerobic diphtheroids), which may show a tendency to form short branches.

Biopsies for culture and histopathology are useful, but it may be necessary to examine many sections and pieces of tissue before sulfur granule colonies of Actinomyces are found. The morphology of the sulfur granule in tissue is quite characteristic with routine hematoxylin and eosin (H&E) or histologic Gram staining. With the histologic H&E stain, the edge of the granule shows amorphous eosinophilic “clubs” formed from the tissue elements and containing the branching actinomycotic filaments.

Penicillin G is the treatment of choice for actinomycosis, although a number of other anti-microbics (ampicillin, doxycycline, erythromycin, and clindamycin) are active in vitro and have shown clinical effectiveness. High doses of penicillin must be used and therapy prolonged for up to 6 weeks or longer before any response is seen. The initial treatment course is usually followed with an oral penicillin for 6 to 12 months. Although slow, response to therapy is often striking given the degree of fibrosis and deformity caused by the infection. Because detection of the causative organism is difficult, many patients are treated empirically as a therapeutic trial based on clinical findings alone.

Penicillin may have to be used empirically

Nocardia species are Gram-positive, rod-shaped bacteria related to mycobacteria that show true branching both in culture and in stains from clinical lesions. The microscopic morphology is similar to that of Actinomyces, although Nocardia tend to fragment more readily and are found as shorter branched units throughout the lesion rather than concentrated in a few colonies or granules. Many strains of Nocardia take the Gram stain poorly, appearing “beaded” with alternating Gram-positive and Gram-negative sections of the same filament (Figure 28-5A and B). The species most common in human infection (N asteroides and N brasiliensis) are weakly acid-fast. 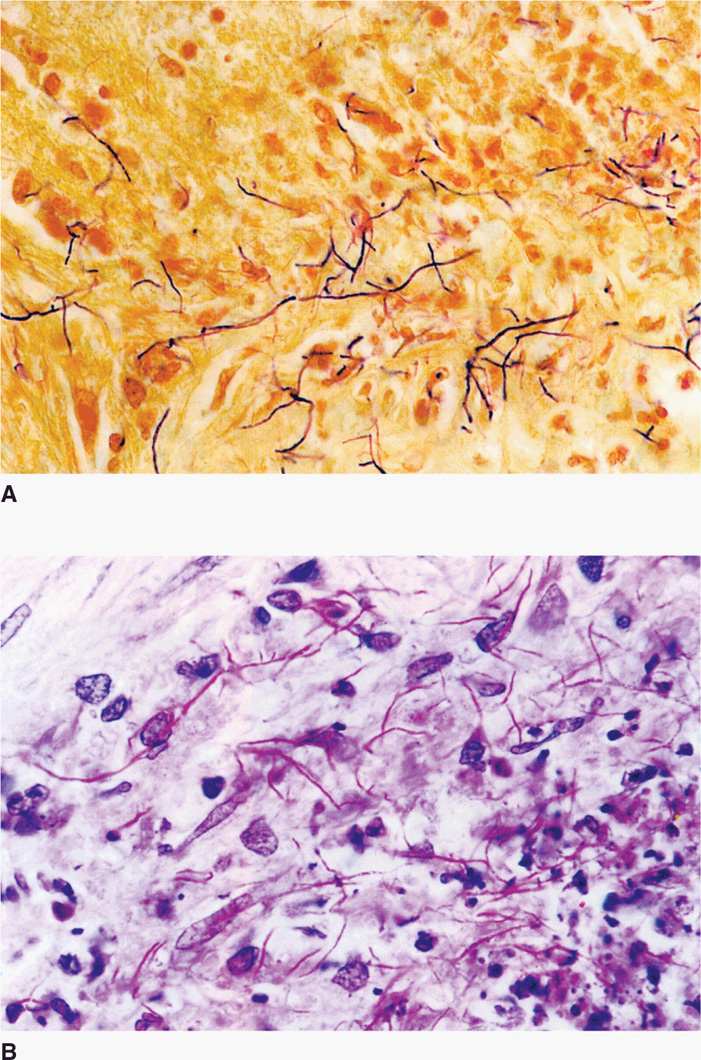 FIGURE 28–5. Nocardia in sputum. A. Note the filamentous bacteria forming tree-like branches among the neutrophils. the beaded appearance of the rods is typical. B. the same sputum stain with the modified (weaker) acid-fast method. Note the red filaments with the same branching pattern as in a. (reproduced with permission from Connor Dh, Chandler FW, Schwartz DQ, et al: Pathology of Infectious Diseases. Stamford CT: appleton & Lange, 1997.)