Skin is a major protective barrier

For the internal surfaces a viscous mucin secreted by goblet cells protects the epithelium lining of the respiratory tract, the gastrointestinal tract, and the urogenital system. Microorganisms become trapped in this thick network of protein and polysaccharide and may be swept away before they reach the epithelial cell surface. Secretory IgA (sIgA) secreted into the mucus and other secreted antimicrobials such as lysozyme and lactoferrin aid this cleansing process. Some bacteria excrete an enzyme sIgA protease, which cleaves human sIgA1 in the hinge region to release the Fc portion from the Fab fragment. This enzyme may play an important role in establishing microbial species at the mucosal surface. Ciliated epithelial cells constantly move the mucin away from the lower respiratory tract. In the respiratory tract, particles larger than 5 μm are trapped in this fashion. The epithelium of the intestinal tract below the esophagus is a less efficient mechanical barrier than the skin, but there are other effective defense mechanisms. The high level of hydrochloric acid and gastric enzymes in the normal stomach kill many ingested bacteria. Other bacteria are susceptible to pancreatic digestive enzymes or to the detergent effect of bile salts.

Acids and enzymes aid in cleaning

How efficiently bacterial pathogens navigate all these barriers before their initial encounter with their target cell type is in some ways measured by their infecting dose. How many organisms must be given to a host to ensure infection in some proportion of the individuals? Estimates of the infectious doses for several pathogens are shown in Table 22-2. In general, pathogens that have environmental or animal reservoirs can overwhelm innate defenses with large numbers. Those that are amplified by growth in food may also deliver high numbers with or without a reservoir. Pathogens with no reservoir or amplification mechanism must be transmitted human-to-human and thus require the lowest infecting doses. Without this advantage, these pathogens would eventually die out in the population.

ADHERENCE: THE SEARCH FOR A UNIQUE NICHE

The first major interaction between a pathogenic microorganism and its host entails attachment to a eukaryotic cell surface. In its simplest form, adherence requires the participation of two factors: an adhesin on the invading microbe and a receptor on the host cell (Figure 22–1). The adhesin must be exposed on the bacterial surface either alone or in association with appendages like pili. Pili seem to be “sticky” by themselves which may be enhanced by specific adhesin/receptor molecular relationships mediated by molecules at tips. In Gram-negative bacteria, the outer membrane is a major site for adhesins. Most adhesins are proteins, but carbohydrates and teichoic acids may also be involved. The chemical nature of the host receptors is less well known because of the greater difficulty in their isolation (bacteria can be grown by the gallon), but they may be thought of as general or specific. For example, two of the most common receptors, mannose and fibronectin, are widely present on human epithelial cell surfaces. Pili that bind to them can mediate attachment at many sites. Specific receptors are those unique to a particular cell type such as human enterocytes or uroepithelial cells. Where known, these receptors are usually sugar residues that are part of glycolipids or glycoproteins on the host cell surface.

FIGURE 22–1. Bacterial attachment. A. The bacterial cell has both adhesive pili and another protein adhesin protruding from its surface. The pili are binding to a receptor present in material covering the cytoplasmic membrane. B. The pili have pulled the organism into closer contact allowing the second adhesin to bind its receptor, which extends from the cytoplasmic membrane through the surface coating.

Adhesin and receptor are required

Receptors may be specific to host cell type

Many bacteria have more than one mechanism of host cell attachment. In some instances, pili mediate initial attachment, which is followed by a stronger, more specific binding mediated by another protein. This may allow implementation of a second function such as cytoskeleton rearrangement or invasion. Multiple adhesins may also allow bacteria to use one set at the epithelial surface, but a different set when encountering other cell types or the immune system. The role of pili may be more than a simple adhesive one. The pili of Neisseria gonorrhoeae, the cause of gonorrhea, mediate an active twitching motility on the cell surface with the formation of mobile microcolonies (Figure 22–2). Biofilms may also act as an adherence mechanism by binding to catheters, prosthetic devices, or mucosal surfaces.

FIGURE 22–2. Pili. Pili extending from a microcolony of Neisseria gonorrhoeae (gonococci) are shown attaching the microvilli of an epithelial cell. The pili actively retract and mediate a movement of the colony across the cell surface called twitching motility. (Photomicrographs kindly provided by Dustin L. Higashi and Magdalene So.)

Many have multiple attachment mechanisms

Once the bacterial pathogen attaches, it must persist if it is to produce disease. Survival is less complicated if the organism can produce injury without moving from its initial niche. This is the case with some exotoxin-mediated bacterial diseases (diphtheria, whooping cough), but most pathogens must move either into the cell or beyond it. To do so requires a new set of survival strategies which include either multiplying in the intracellular milieu or avoiding the attack of complement and phagocytes in the submucosa.

INVASION: GETTING INTO CELLS

A few bacteria, like viruses, are obligate intracellular pathogens. Other bacteria are facultative intracellular pathogens and can grow as free-living cells in the environment as well as within host cells. Generally, invasive organisms adhere to host cells by one or more adhesins but use a class of molecules, called invasins, which interact with integrins or other families of cell adhesion molecules. The integrins in turn interact with elements of the cell cytoskeleton stimulating modifications which end in uptake of the bacterial cell. Invasive bacteria seem to be exploiting cell uptake mechanisms that are there for other purposes such as nutrition.

Bacteria enter cells initially within a membrane-bound, host-vesicular structure but then follow one of two pathways (Figure 22–3). Some bacteria (Listeria, Shigella)enzymatically lyse the phagosome membrane and escape to the nutrient-rich safe haven of the host cell cytosol. These bacteria may continue to multiply there, infect adjacent cells, or move through the cell to the submucosa. Other invasive pathogenic species (Salmonella serotype Typhi, Mycobacterium tuberculosis)remain in the phagosome and replicate even in professional phagocytes. Their survival in this usually perilous location is due to thwarting normal host cell trafficking patterns and avoiding the killing action of the phagolysosome. There are multiple known mechanisms for this including preventing phagosome–lysosome fusion or, if fused, blocking acidification to the optimum pH for digestive enzyme activity. Some bacteria are able to neutralize the phagocytes’ oxidative burst by the production of neutralizing enzymes (catalase, superoxide dismutase). 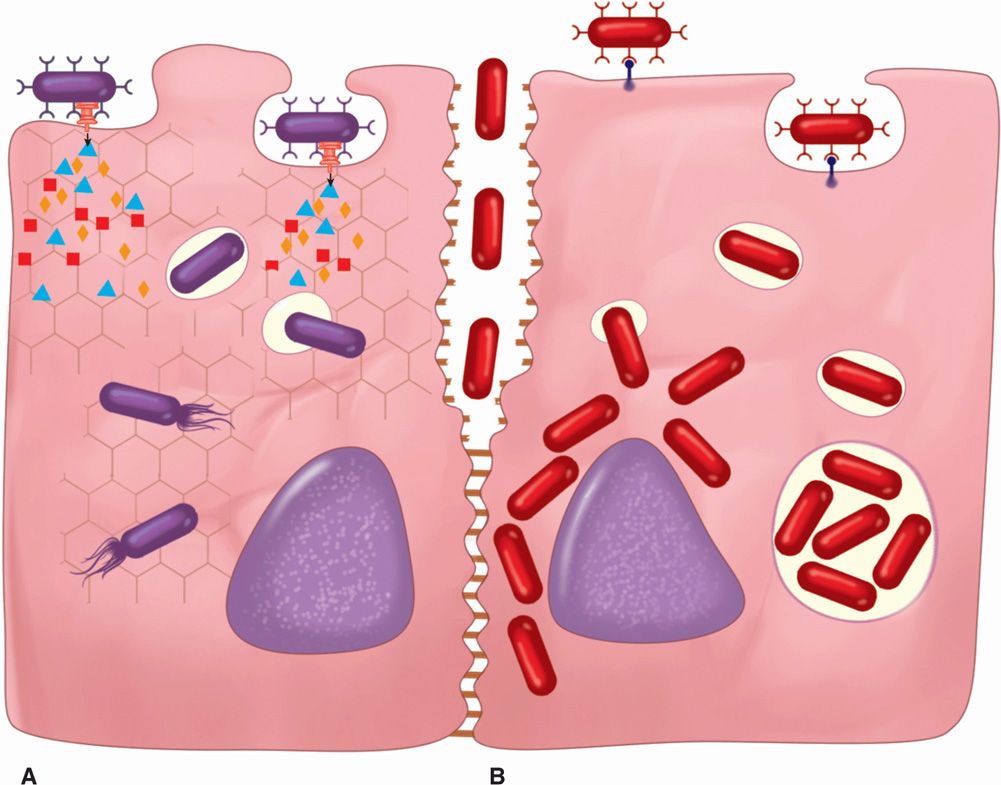 FIGURE 22–3. Bacterial invasion. A. The bacterial cell has an injection secretion system that is injecting multiple proteins into the host cell. Some of these cause cytoskeletal reorganization, which engulfs the bacteria. In the cytosol, the bacteria lyse the vacuolar membrane, escape, and move about. B. A bacterial surface protein binds to the cell surface and induces its own endocytosis. In the cell, some escape (as in A), and others multiply in the phagosome. Another bacterium is seen invading between cells A and B by disrupting intercellular attachment molecules.

In Gram-negative bacteria with injection secretion systems (types III, IV, VI), a variation on the above scenarios is possible. The secretion systems inject many proteins, some of which disrupt cellular signaling and the cell’s cytoskeleton. The cytoskeleton rearrangements may leave the bacteria tightly bound to an altered surface or trigger invasion. One pathogen even injects its own receptor, which is processed to the outer membrane where it mediates tight binding of the bacteria.

PERSISTING IN A NEW ENVIRONMENT

Bacteria that reach the subepithelial tissues are immediately exposed to the extracellular tissue fluids, which have defined properties that inhibit multiplication of many bacteria. For example, most tissues contain lysozyme in sufficient concentrations to disrupt the cell wall of Gram-positive bacteria. Tissue fluid itself is a suboptimal growth medium for most bacteria and is deficient in free iron. In humans the iron not found in hemoglobin is chelated to a series of iron-binding proteins (lactoferrin, transferrin). Because virtually all pathogenic bacteria require iron they have evolved their own set of iron-binding proteins called siderophores which effectively compete with the human proteins for available iron.

The host immune system evolved in large part because of the selective pressure of microbial attack. To be successful, microbial pathogens must escape this system at least long enough to be transmitted to a new susceptible host or to take up residence within the host in a way that is compatible with mutual coexistence.

The early warning and response system in which pathogen-associated molecular patterns (PAMP) are recognized by Toll-like receptors (TLRs) (see Chapter 2) is subject to evasion by successful pathogens. This has been studied in regard to Gram-negative bacterial LPS whose pattern is typically detected by TLR-4. In some pathogens (Helicobacter, Legionella, Yersinia)the lipid A (toxic) component of LPS is simply a variant poorly recognized by TLR-4; other pathogens (Salmonella, Pseudomonas)are able to modulate their lipid A pattern. The result of both is a head start by evading a major innate immune mechanism.

LPS PAMPs are not recognized

A fundamental requirement for many pathogenic bacteria is escape from phagocytosis by macrophages and polymorphonuclear leukocytes. The most common bacterial means of avoiding phagocytosis is an antiphagocytic capsule, which is possessed by almost all principal pathogens that cause pneumonia and meningitis. These polysaccharide capsules of pathogens interfere with effective complement deposition on the bacterial cell surface by binding regulators of C3b that are present in serum. When one of these, serum factor H, is concentrated on the capsular surface, it accelerates the degradation of C3b. This negates both direct complement injury and makes the receptors recognized by phagocytes unavailable (Figure 22–4). This mechanism is not restricted to polysaccharide capsules. Surface proteins able to bind factor H have the same biologic effect. Antibody directed against the capsular antigen reverses this effect because C3b can then bind in association with IgG. Another mechanism for complement disruption is through surface acquisition of sialic acid, a common component of capsular polysaccharides. Some bacteria are able to incorporate sialic acid from the host on their surfaces with an effect similar to capsules.

FIGURE 22–4. Bacterial resistance to opsonophagocytosis. A. Alternate pathway. In the alternate complement pathway, C3b binds to the surface of bacteria, providing a recognition site for professional phagocytes and sometimes causing direct injury. Bacteria with special surface structures such as capsules or protein are able to bind serum factor H to their surface. This interferes with complement deposition by accelerating the breakdown of C3b. B. Classical pathway. Specific antibody binding to an antigen on the surface provides another binding cite for C3b. Phagocyte recognition may occur even if factor H is present.