Papillomaviruses are small, naked capsid (unenveloped), double-stranded, circular DNA viruses exhibiting cubic (icosahedral) symmetry of 55 nm in diameter (Figure 19–1). The icosahedral capsid comprises two capsid (structural) proteins, L1 (major capsid protein) and L2 (minor capsid protein). The 8 kb, circular, double-stranded DNA genome of human papillomavirus (HPV) encodes seven or eight early genes (E1-E8) and two late structural capsid genes (L1 and L2). The early genes are required for regulation of viral replication and transformation. The virus does not encode any polymerases and, therefore, is dependent on host cell transcription and replication machinery. Based on DNA homology, there are over 100 genotypes of HPVs. Papillomaviruses cause epidermal papillomas and warts in a wide range of higher vertebrates. Different members of the group are generally species specific. For example, bovine papillomaviruses and HPVs infect only the hosts reflected in their names. In some cases, lesions caused by these agents can become malignant, and the role of these agents as causes of certain human cancers is increasingly recognized. Papillomaviruses have been difficult to grow in tissue culture, and most of the virologic information has been derived from molecular and gene expression studies. 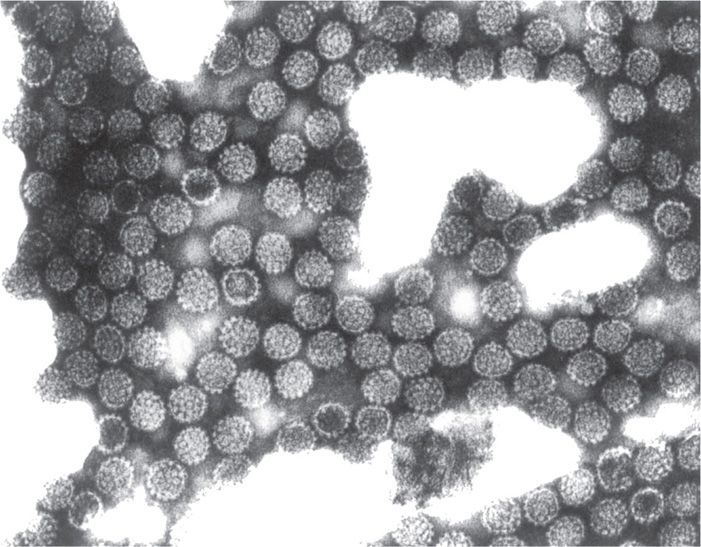 The genomes of many of the papillomaviruses have now been cloned and compared by restriction endonuclease and DNA homology procedures. These studies have shown a wide genomic diversity among papillomaviruses that infect different species and also among those that infect humans. This has led to the allocation of numbers for the different genotypes.

The replication cycle of HPV is not very well understood because of the lack of studies in a tissue culture system. However, the life cycle of the virus can be reproduced in cultured cells by using a raft culture system made up of stratified squamous epithelial cells. Moreover, in infected human tissue, infectious particles are found. HPV infects the basal layer of squamous epithelium and the virus is internalized and uncoated, and the viral DNA is delivered to the nucleus. Host RNA polymerase transcribes early (E) genes followed by early protein synthesis. Some of the early genes, E6 and E7, are involved in transformation that causes an increase in cell division. E6 binds to p53 (tumor suppressor) and E7 p105RB (retinoblastoma) proteins and abrogate cell cycle regulation. The dividing cells carry viral genome (as extrachromosomal DNA) allowing HPV genome to persist in these cells. As the infected cells differentiate to early terminal stages, other viral early genes are expressed, namely, E1 and E2, which are involved in regulation of viral transcription and replication. Viral DNA synthesis occurs at two levels directed by host cell DNA polymerase: (1) in the lower portion of the epidermis to maintain a stable multicopy viral DNA for latent infection, and (2) as vegetative DNA replication, which occurs in the more differentiated epithelial cells. In some cases, papillomavirus DNA can integrate into the host chromosomes. The infected cells further differentiate to a terminal stage (keratinocytes) wherein late gene expression synthesis of late (L) capsid structural proteins and vegetative DNA synthesis take place. At this stage, there is a burst of viral DNA synthesis followed by virus assembly in the nucleus and virus release by cell lysis. HPV infects the basal layer of the epidermis.

Early replication in the basal layer of epidermis

Latent viral DNA maintained in the basal layer of epithelium

More than 100 genotypes of human papillomaviruses (HPVs) have been identified in human specimens. The genotypes are antigenically different, and groups of genotypes are associated with specific lesions. HPVs have been identified in plantar warts; in flat and papillomatous warts of other skin areas; in juvenile laryngeal papillomas; and in a variety of genital hyperplastic epithelial lesions, including cervical, vulvar, and penile warts and papillomas. In addition, they are associated with premalignant (cervical intraepithelial neoplasia) and malignant disease (cervical and oral cancer). Lesions comparable to those occurring in the cervix are now recognized in the anus, especially among men who have sex with men (MSM) and are infected by human immunodeficiency virus (HIV).

Most common sexually transmitted infection in the United States

Major cause of cervical cancers in women

Cutaneous, nongenital warts usually occur in children and young adults; presumably immunity to the HPV genotypes causing these lesions develops and provides subsequent protection. The genotypes causing genital lesions are different from those causing cutaneous, nongenital warts. Common warts are cause by HPV types 1 and 2; meat and fish handlers are prone to HPV type 7. Over 40 HPV genotypes have been identified in genital lesions of humans, and there are many apparently silent infections with these viruses. Cross-immunity does not occur, and sequential infection with multiple genotypes does take place. A single sexual exposure to an infected person may transmit the infection 60% of the time; usually the infected person is asymptomatic. Having multiple sex partners is the major risk factor for acquiring HPV infection. From 20% to 60% of adult women in the United States are infected with one or another of the genotypes. In addition, more than 50% of sexually active people become infected with HPV at least once in their lifetime. HPV types 6 and 11 are associated most commonly (about 90%) with benign genital warts in males and females and with some cellular dysplasias of the cervical epithelium, but these lesions rarely become malignant. HPV types 6 and 11 have been associated with nasal, oral, conjunctival, and laryngeal warts. They can be perinatally transmitted and cause infantile laryngeal papillomas. HPV types 16, 18, 31, 45, and 56 may also cause lesions of the vulva, cervix, and penis. Infections with these viral types, especially type 16, may progress to malignancy. Viral genomes of at least one of these five types are found in the majority—but not all—of markedly dysplastic uterine cervical cells, in carcinoma in situ, and in cells of frankly malignant lesions.

Papillomaviruses have a predilection for infection at the junction of squamous and columnar epithelium (eg, in the cervix and anus). Papillomaviruses were the first DNA viruses linked to malignant changes. In the mid-1930s, Shope demonstrated that benign rabbit papillomas were due to filterable agents and could advance to become malignant squamous cell carcinomas. External cofactors, such as coal tar, could hasten this process. However, work on the biology and mechanism by which these agents foster malignant transformation has been impeded by the inability to cultivate papillomaviruses in vitro. Molecular probes to detect viral products in vivo indicate that replication and assembly of these viruses take place only in the differentiating layers of squamous epithelia, a situation that has not been reproduced in vitro.

The first evidence that HPVs could be associated with human malignant disease came from observations on epidermodysplasia verruciformis. This disease has a genetic basis that results in unusual susceptibility to HPV types 5 and 8, which produce multiple flat warts. About one-third of affected patients develop squamous cell carcinoma from these lesions.

The mechanism of oncogenicity of HPV is less clear. Cells infected with genomes of several papillomaviruses can transform cells and produce tumors when injected into nude (T lymphocyte-deficient) mice. The viral genome exists as multiple copies of a circular episome within the nucleus of transformed cells, but is not integrated into the cellular genome. This appears also to be the case with benign human lesions. In malignant tumors, part of the viral genome is found integrated into the cellular genome, but integration is not site specific. Both the integrated viral genome and the extrachromosomal form carry their own transforming genes. Host cells normally produce a protein that inhibits expression of papillomavirus transforming genes, but this can be inactivated by products of the virus and possibly by other infecting viruses, thus allowing malignant transformation to occur. HPV early gene products, E6 and E7, have been implicated in oncogenicity. E6 accelerates the degradation of p53, a tumor suppressor protein, and reduces its stability. E7 interacts with pRB, retinoblastoma protein, to abrogate cell cycle regulation. The inhibition of p53 and pRB functions results in cell transformation by E6 and E7, causing tumors. Another HPV gene product, E5, has been found to function in benign papillomas. HPV DNA is found in more than 95% of cervical carcinoma specimens when tested by polymerase chain reaction (PCR). The discovery that HPV causes most cervical cancers earned the 2008 Nobel Prize in Medicine for the German researcher, Harald zur Hausen.

Viral genomes carry their own transforming genes, E6 and E7

HPV is the major cause of cervical cancer

Cutaneous warts develop at the site of inoculation within 1 to 3 months and can vary from flat to deep plantar growths (Figure 19–2). Although they can persist for years, they ultimately spontaneously regress. Respiratory papillomatosis due most often to types 6 and 11 occurs as intraoral or laryngeal lesions. These tend to occur in infants as a result of natal exposure, or in adults. Treatment is varied and complex. 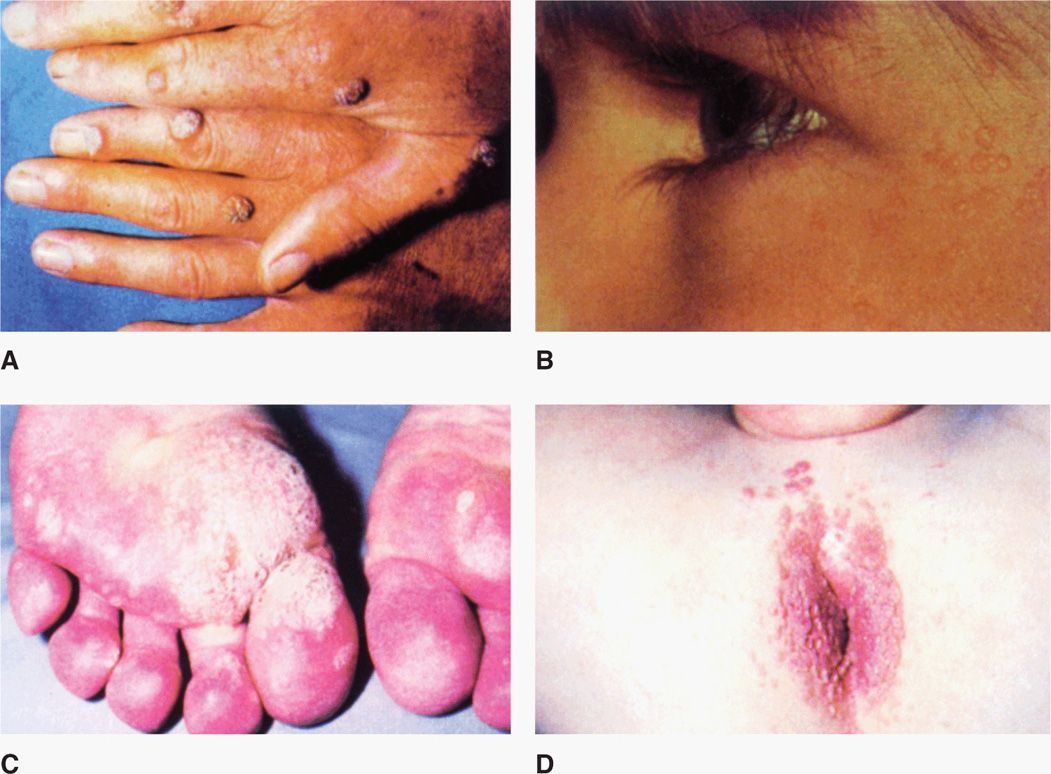