Poxviruses are large, brick-shaped or ovoid, linear double-stranded DNA (130-300 kbp) containing core within a double membrane and a lipoprotein envelope carrying virions measuring approximately 350 × 270 nm (vaccinia virus) (Figures 11–1 and 11–2). The core is flanked by two lateral bodies containing several viral enzymes and proteins, including DNA-dependent RNA polymerase and transcription factors required for viral replication. The poxvirus genome encodes all essential enzymes, proteins, and factors needed for viral replication in the cytoplasm of infected cells, including transcription, DNA synthesis, and virus assembly. The envelope is acquired in the cytoplasm either from the Golgi apparatus or other cellular organelles, but not by budding from the plasma membrane and may not be essential for viral infectivity. 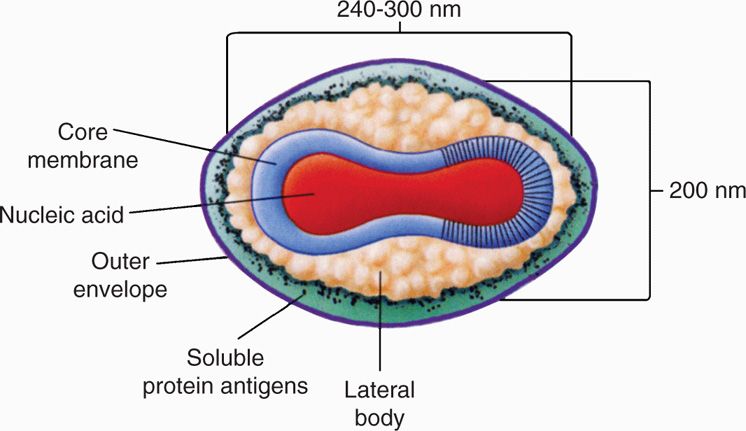 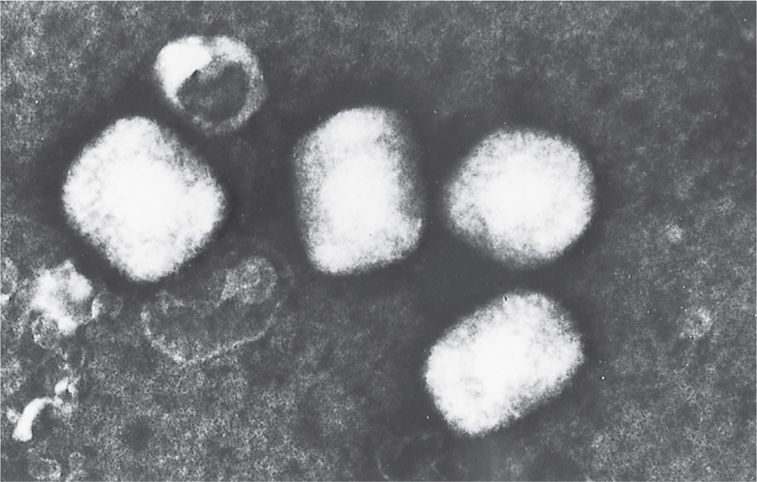 Poxvirus replication is unique among DNA viruses in that the viral replication cycle takes place in the cytoplasm of the infected cell (Figure 11–3). The viral replication cycle starts with attachment, rapid adsorption to receptors followed by viral entry, and release of cores in the cytoplasm. Viral DNA-dependent RNA polymerase in the cores initiate early transcription to synthesize several proteins, including DNA and RNA polymerases, transcription factors, growth factors, and immune defense molecules. The uncoating of the cores uses viral DNA to synthesize concatemeric DNA molecules, which are eventually resolved into viral DNA genomes for progeny viruses. The late mRNAs synthesize viral structural proteins required for virus assembly and early transcription factors for packaging in the virions. Assembly of the progeny viruses begins with the formation of membrane structures followed by maturation of intracellular mature virions (IMV). The virions are further wrapped by membranes from the Golgi apparatus that are lost upon the release of extracellular enveloped virions (EEV). 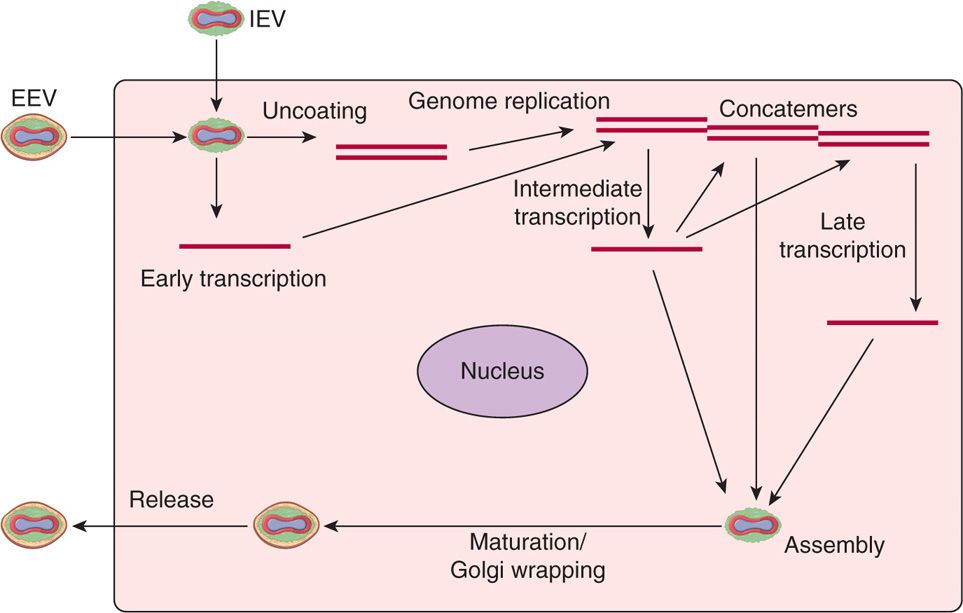 Generally, two types of viruses are known: Variola major and variola minor (alastrim). Although the viruses are indistinguishable antigenically, their fatality rates differ considerably (<1% for variola minor, 3-40% for variola major). The high replicative fidelity of variola DNA polymerase enzyme limited its ability to significantly mutate and adapt to the humans, which preserved the antigenic cross-reactivity with other orthopoxviruses such as vaccinia virus that was used for vaccination. There is no known animal reservoir for variola virus.

Variola major and variola minor are difficult to distinguish

Smallpox is an acute infection in which the dominant feature is a uniform papulovesicular rash that evolves to pustules over 1 to 2 weeks. The potential for spread and mortality is significant, particularly in a nonimmune population. Intensive worldwide epidemiologic control measures, including vaccination, are currently thought to have achieved global eradication of the disease; nevertheless, it is imperative to continue careful surveillance in the event that the virus may unexpectedly reemerge. Other poxviruses, such as monkeypox, are occasionally transmitted from animals to humans, and can sometimes mimic smallpox in a much milder form.

Smallpox has played a significant role in world history with respect to both the serious epidemics recorded since antiquity and the sometimes dangerous measures taken to prevent infection. Smallpox virus is highly contagious and can survive well in the extracellular environment. Acquisition of infection by infected saliva droplets or by exposure to skin lesions, contaminated articles, and fomites has been well documented. Variola caused a severe systemic illness when inhaled but a milder disease when inoculated into the skin.

Person-to-person communicability by respiratory droplets and fomites is high

In 1967, the World Health Organization (WHO) launched an ambitious program aimed at eradication of smallpox. This goal was considered realistic for two major reasons: (1) no extra-human reservoir of the virus was known to exist, and (2) asymptomatic carriage apparently did not occur. The basic approach included intensive surveillance for clinical cases of smallpox, prompt quarantine of such patients and their contacts, and immunization of contacts with vaccinia virus (vaccination) to prevent further spread. A tremendous amount of effort was involved, but the results were astonishing: The last recorded case of naturally acquired smallpox occurred in Somalia in 1977. Global eradication of smallpox was confirmed in 1979 and accepted by WHO in May 1980. Since then, the virus has been solely secured in two WHO-restricted laboratories: One at the United States Centers for Disease Control and Prevention (CDC) in Atlanta, Georgia, and the other at a similar facility in Moscow, Russia.

Immunization and case tracing led to success in 1980

Unfortunately, the dramatic world events that occurred in 2001 have raised the chilling possibility that clandestine virus stocks of smallpox may exist elsewhere and could be effectively used for major bioterrorist attacks. Reasons for such concern include: (1) smallpox is one of the most stable viruses; (2) it can remain stable for a long time, if freeze-dried; (3) it is unaffected by environmental conditions; (4) scab forms are stable for 1 year at room temperature and in one case it has been found to be stable for 13 years in a laboratory; (5) it has high infectivity among humans; (6) it is associated with high susceptibility among populations (routine vaccination against smallpox ended in 1972, and current vaccine supplies are limited); (7) there is a risk that healthcare providers may not promptly recognize and respond to early cases; and (8) there is an absence of specific antiviral treatment.

One of the most stable viruses unaffected by environmental conditions

A response plan and guidelines for such threats is posted on a CDC website (www.cdc.gov/nip/smallpox) and is updated at regular intervals.

Continuing surveillance also includes studies of poxviruses of animals (eg, buffalopox, monkeypox), which are antigenically somewhat similar to smallpox. Some virologists remain legitimately concerned that an animal poxvirus, such as monkeypox, could mutate to become highly virulent to humans—a further reminder that complacency could be dangerous.

Animal poxviruses could be a future threat

The virus enters the mucous membranes of the upper respiratory tract through inhalation followed by viral replication at the site of entry and infection of mononuclear phagocytic cell in the regional lymph nodes. Viremia allows the virus to be transported to liver, spleen, and other tissues. At the end of the incubation period, inflammatory mediators are released causing fever and other symptoms. In variola, a secondary viremic phase has been demonstrated. The virus spreads through the capillaries to the skin followed by viral replication and evolution of rash. The virus further spreads cell-to-cell or through the mid and basal layers of skin causing necrosis and vesicles. The orthopoxviruses as a group cause a dramatic effect on host cell macromolecular function, leading to a switch from cellular to viral protein synthesis, changes in cell membrane permeability, and cytolysis. Eosinophilic inclusions, called Guarnieri bodies, can be seen in the cytoplasm. Multiple viral proteins, such as complement regulatory and immunomodulatory proteins are encoded by the virus that can interfere with induction or activities of multiple host mononuclear cell cytokines, chemokines and other immune mediators. This serves to impair the host innate defenses that are important in early control of infection. Some immunomodulatory proteins interfere with the TH1 response, causing depressed cell-mediated immunity in controlling primary infection. Enormous inflammatory responses were also accountable for main characteristics of illness. In some patients, high levels of circulating virus caused hemorrhagic disease that resembled septic shock. Although variola was found in several tissues of infected patients, the lesions are limited to skin and oropharyngeal mucosa because the virus produces a homolog of epidermal growth factor that proliferates keratinocytes, followed by virus replication and spread.

The incubation period of smallpox is usually 12 to 14 days, although in occasional fulminating cases it can be as short as 4 to 5 days. The typical onset is abrupt, with fever, chills, and myalgia, followed by a rash 3 to 4 days later. The rash evolves to firm papulovesicles that become pustular over 10 to 12 days, then crust and slowly heal. Only a single crop of lesions (all in the same stage of evolution) develop; these lesions are most prominent over the head and extremities (Figure 11–4). Some cases are fulminant, with a hemorrhagic rash (“sledgehammer” smallpox). Death can result from the overwhelming primary viral infection or from bacterial superinfection. Diagnostic methods use vesicular scrapings and include culture, electron microscopy, gel diffusion, and polymerase chain reaction. 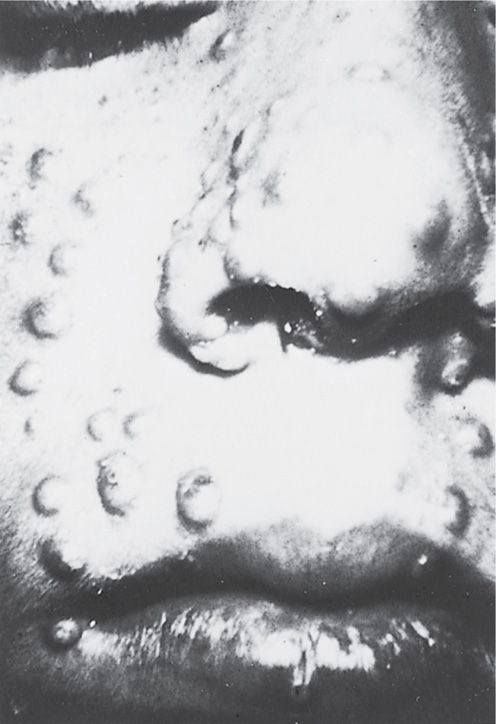 FIGURE 11–4. Close-up of facial lesions of smallpox during the first week of the illness.