Vessels of the Thigh 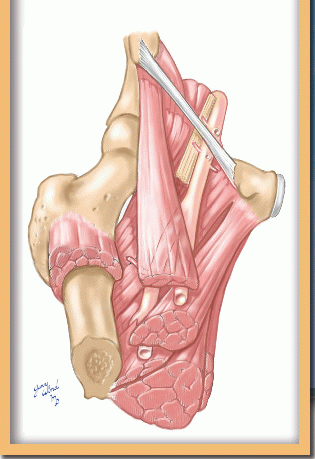 Vessels of the Thigh

The posterior view of the adductor magnus muscle (Fig. 16-2) shows the more horizontal direction of the pubic fibers and the predominantly longitudinal ischial fibers. The tendinous openings can be seen along the linea aspera.


The anterior compartment of the thigh consists of the quadratus femoris muscle, which is made up of four heads: rectus femoris, vastus medialis, vastus lateralis, and vastus intermedius (Fig. 16-3). These muscles enlarge from tapered origins proximally to a bulky teardrop form distally. The deep and superficial femoral vessels lie in the cleft between the vastus medialis and adductor muscles.

The medial adductor compartment forms a superiorly based pyramid between the quadriceps muscle and the hamstrings (Fig. 16-5). In cross section (Fig. 16-6), the bulky adductor magnus muscle has a roughly triangular profile, with a narrow linear medial attachment along the medial lip of the linea aspera.


Vessels
The common femoral artery enters the femoral triangle beneath and slightly medial to the midpoint of the inguinal ligament (Fig. 16-7). Within the femoral triangle it divides into deep and superficial branches. The superficial branch crosses the adductor longus muscle to lie beneath the sartorius muscle. The deep (profunda) branch passes between the pectineus and adductor longus muscles to lie beneath the latter muscle.

The deep femoral vessels (Fig. 16-10) lie close to the femur beneath the adductor longus muscle. They first lie on the adductor brevis muscle, then directly on the adductor magnus muscle. Its upper perforating branch or two transverse both deeper adductor muscles, whereas the lower branches penetrate only the tendon of the magnus to reach the posterior compartment.

Cross sections of the thigh show the relationships of the vessels to the muscular compartments (Fig. 16-11). The lateral intermuscular septum of the thigh between the vastus lateralis and biceps femoris muscles is dense and well developed. There is firm adhesion between the surface of the adductor longus muscle and the adjacent vastus medialis muscle that requires sharp dissection to separate. The remaining interfaces between muscle groups are less well defined.

Tags: Anatomic Exposures in Vascular Surgery
May 22, 2016 | Posted by drzezo in ANATOMY | Comments Off on Vessels of the Thigh
Premium Wordpress Themes by UFO Themes
WordPress theme by UFO themes
%d bloggers like this: