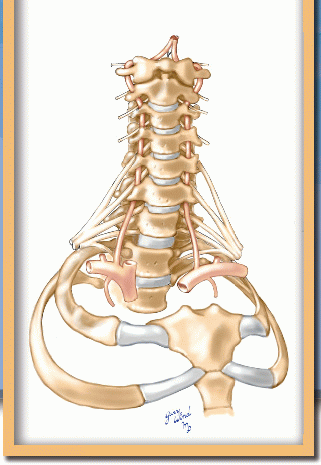 The deep central location of the vertebral arteries affords protection but makes surgical access more difficult than access to the companion carotid system. The following discussion focuses on the details of important relationships at different levels of the arteries.
Anterior Paravertebral Musculature
The vertebral arteries lie within a plane defined by a delta-shaped array of muscles attaching to the vertebral bodies and transverse processes (Fig. 2-2). The longus colli and longus capitis muscles provide anterior support to the cervical vertebrae and bracket the anterior longitudinal ligament of the spine between them. Laterally, the scalene muscles fan out from the cervical transverse processes and insert on the first and second ribs. The lower cervical nerve roots emerge between anterior and middle scalene muscles, while the upper roots appear between the longus capitis and levator scapulae muscles. This muscular delta is covered by prevertebral fascia. The anterior scalene and longus colli muscles converge at the prominent anterior tubercle of the transverse process of C6, sometimes called the carotid tubercle (of Chassaignac). In the inverted “V” formed by the muscles below this landmark, the first portion of the vertebral artery penetrates the prevertebral fascia to ascend through the C6 transverse foramen.

The venous tributaries that accompany the distal vertebral artery converge to form a single vertebral vein on emerging from the sixth transverse process (Fig. 2-4). The vein enters the proximal subclavian vein just distal to the internal jugular vein. On the left side, the thoracic duct emerges from the posterior thorax, arches over the subclavian artery, and enters the subclavian vein between the internal jugular and vertebral veins.
The cervical sympathetic chain lies on the prevertebral fascia anterior to the longus colli and capitis muscles, which in turn lie anterior to the transverse processes housing the vertebral arteries. The middle cervical sympathetic ganglion lies at about the level of the carotid tubercle, and the inferior ganglion lies posteromedial to the origin of the vertebral artery. The inferior ganglion gives off fibers that wrap around and ascend with the vertebral artery.


The costocervical trunk arises posteriorly from the subclavian. Its cervical division ascends in the deep posterior cervical muscles and communicates with the vertebral along its course and with descending branches of the occipital artery.


In and around the fat pad are critical structures that must be respected when approaching the vertebral artery. Medially on the left side is the previously described thoracic duct. Deep to the fat pad laterally, the phrenic nerves descend diagonally across the anterior scalene muscles, pass lateral to the thyrocervical trunks, and dip between subclavian artery and vein to enter the chest. The inferior thyroid artery crosses anterior to the proximal vertebral artery.

The Distal Vertebral Artery
Between the transverse processes of the atlas and axis vertebrae, there is more space for access to the vertebral arteries than in other interspaces due to the decreased bulk of the bony arches posteriorly (Fig. 2-6). After emerging through the foramina of the atlas, the arteries take a sharp bend backward and lie in grooves encircling the posterior rims of the bony articular plateaus. They then course anteriorly, medial to the atlantooccipital articulation, and pass through the foramen magnum.


At the level of the posterior groove, the arteries give off branches to the deep muscles of the neck that anastomose with ascending cervical, occipital, and deep cervical arteries. Medial to the articular facets, the arteries give off branches that descend within the vertebral canal, supplying vertebral bodies and meninges. Prior to converging at the level of the pons, small descending branches fuse to form a midline vessel along the ventral surface of the medulla.
The tortuous terminal extracranial vertebral arteries lie deep within the suboccipital muscular triangles and are difficult to expose (Fig. 2-7).

An anterolateral approach to the C1 to C2 segment is possible by detaching the levator scapulae origins from the tips of the transverse processes (Fig. 2-8).

After passing around the posterior part of the articular process, the vertebral artery penetrates first the atlantooccipital ligament and then the dura on its way to the foramen magnum (Fig. 2-9).

Exposure of the Vertebral Artery in the Neck
A number of approaches are available to expose the extracranial vertebral artery, depending on the segment. A useful classification for describing the regional anatomy of the vertebral artery has been highlighted by Morasch1 (Fig. 2-10). The most proximal segment (V1) extends from the subclavian origin of the vertebral artery to the level at which the artery enters the transverse process of C6. The interosseous segment (V2) courses within the transverse processes of the cervical vertebrae from C6 to C2. The third segment (V3) begins at the top of the C2 transverse process and terminates at the base of the skull. The intracranial portion (V4) begins at the atlantooccipital membrane and terminates at the basilar artery.

Supraclavicular Approach
The patient is supine, and the head is turned away from the side of surgery. The incision is made approximately 1 cm above the clavicle, beginning at the clavicular head and extending laterally for a distance of 7 or 8 cm (Fig. 2-11). The incision is
deepened through the platysma muscle and superficial fascia. The external jugular vein is divided at the lateral border of the sternocleidomastoid muscle.
Division of the clavicular head of the sternocleidomastoid muscle and retraction of the sternal head exposes the underlying carotid sheath. The sheath is mobilized by vertical dissection along the lateral border of the internal jugular vein, and the omohyoid muscle is divided (Fig. 2-12
Only gold members can continue reading. Log In or Register to continue

Tags: Anatomic Exposures in Vascular Surgery
May 22, 2016 | Posted by drzezo in ANATOMY | Comments Off on Vertebral Arteries
Premium Wordpress Themes by UFO Themes
WordPress theme by UFO themes
%d bloggers like this: